Six years after a military operation targeted the inhabitants of the city of Cizre when dozens of civilians who had taken refuge in the basements of buildings were killed, appeals for most of the cases have been dismissed by the Turkish Constitutional Court.

On the sixth anniversary of the declaration of a months-long curfew and the start of military operations that left at least 189 civilians dead in Turkey’s Kurdish-majority city of Cizre (Cizîr), a lawyer outlined the current situation regarding the cases at Turkey’s Constitutional Court.

A curfew was declared in Cizre, a city of 125,000, on 14 December 2015 as military and police units encircled the urban area, where a people’s assembly had earlier announced its determination to engage in an autonomous local administration.

Conflict had ensued and clashes had occured between state forces and Kurdish militants after the announcement, and in the first half of September, more than 20 civilians had been killed.

State forces stepped up operations along with the declaration of the curfew on 14 December, and heavy artillery and tanks were brought in, while the civilians in the city had been forced to evacuate the city by cutting off power, water and supply lines and by a blockage of public services.

Newroz Uysal, one of the lawyers working on the ‘Cizre Case’, spoke to Jin News, saying that the cases have been stalled at Turkey’s Constitutional Court after the European Court of Human Rights (ECHR) had rejected in 2019 an appeal concerning the death of Orhan Tunç who’d allegedly been killed in a building basement alongside many other unarmed civilians during an attack by state forces.

The ECHR had rejected the appeal on grounds that domestic remedies have not been exhausted yet.

Uysal, has underlined that it was after the declaration of the curfew on 14 December that particular offences by the state that ought to be considered crimes against humanity actually occured.

“After the declaration, heavy weapons were deployed on hills surrounding the city. The whole city, although some talk about three neighbourhoods, were targeted through continuous bombing. During this time, in the length of 79 days, civilians in the city were left without water, power, basic food supplies, unable to access health services, unable to provide medication for chronic illnesses, unable to tend to pregnant women. All through this process the situation was, beyond a state of emergency, it was a state of war.” 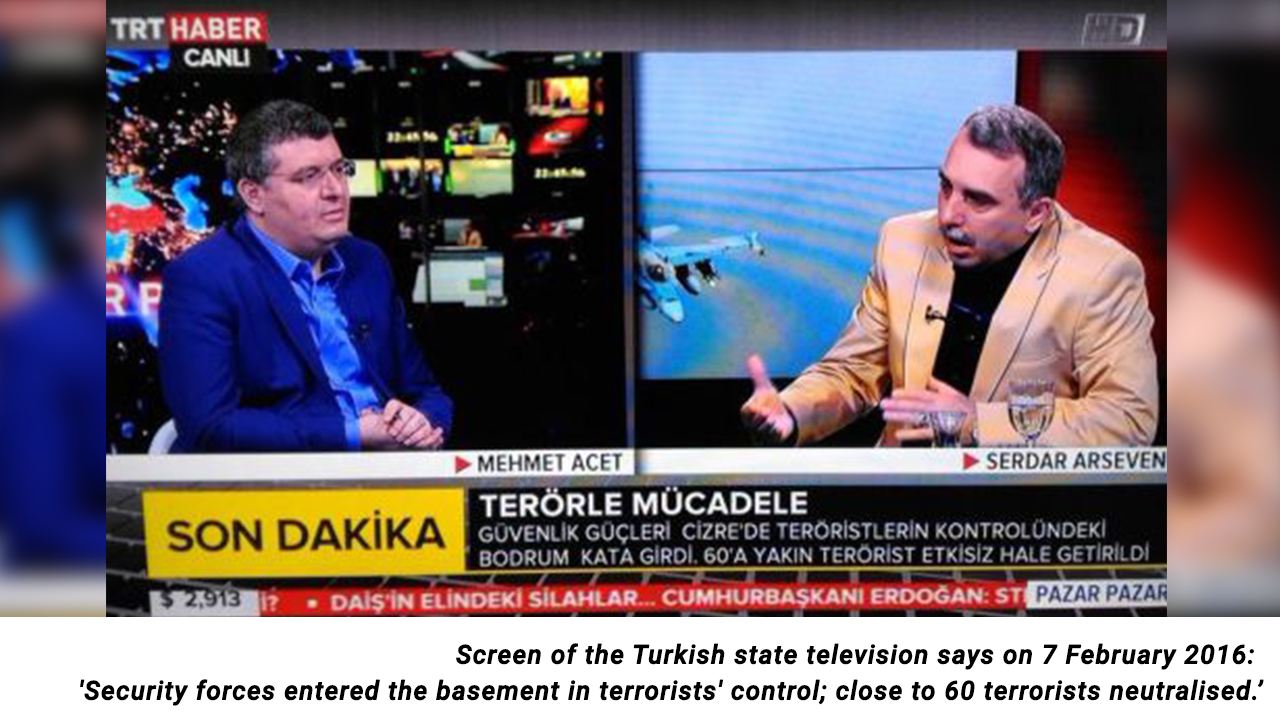 She went on emphasising that the civilians trapped in the basements were killed in brutal attacks by state forces even as they continously tried to reach out, calling for a peaceful exit and medical help.

“The people who had taken refuge in three basements tried to reach out. Mehmet Tunç, Mehmet Yavuzel and Derya Koç had seperately called via mobile phones of either MPs or journalists, gave their exact locations, provided information on the health conditions of the injured amongst them, and on how many people there were in the basements. Appeals had been made by various lawyers in the meanwhile to both the Turkish Constitutional Court and the European Court of Human Rights for provisional injunctions. Unfortunately these people could not be saved. In the massacres that occured in three seperate basements, especially in one where people had been incinerated, dozens of people were killed.”

She concluded by saying that the state did not carry out an effective investigation into the massacres and failed to fulfill its obligations by dismissing most of the cases and letting evidence like camera footage from the scene be destroyed or concealed.