Ayşe Kazanhan, the mother of Nihat Kazanhan says that she will never let the case be forgotten and that this has become the sole purpose of her life.

The mother of Nihat Kazanhan, a 12-year-old Kurdish boy killed by the police on 14 January 2015 in Turkey’s Kurdish-majority city of Cizre (Cizîr), spoke to Jin News on the seventh anniversary of her son’s death.

Ayşe Kazanhan called again for justice five years after a police officer had been sentenced to 14 years in prison for killing Nihat, and four others to six months each over the offence of not reporting the crime.

The Turkish Supreme Court of Appeals had rejected the appeal made by the family of Nihat in July 2019, and the family appealed to the Turkish Constitutional Court which is yet to rule on the case.

Mother Ayşe Kazanhan said that her son was killed by the police indiscriminately.

“The state forces, all of a sudden, stopped in front of my kid. They killed him indiscriminately. What else can I say on this? Apart from, that many of our people were killed by them also for no reason. Even though we did nothing to be considered as a crime. No words, no action, nothing at all, but still we have been arrested and sentenced to a hundred years in prison.”

Ayşe Kazanhan went on to emphasise that she would never let the case slip into oblivion and that this has become the reason that she goes on living.

“Let me ask, why do these sort of incidents not occur ever in İzmir, Ankara or in İstanbul, but in our cities? The children of people are not killed in such ways as we have been exposed to. What is our crime? What do we do in our streets so bad that we have been exposed to these killings. My child, my Nihat, and all the children who were killed in the streets, were called terrorists. We are not terrorists, we are Muslim people, but smarter, more respectful and more virtuous than any of them. They will never be able to make us bow our heads down. As long as I live, I will never let this case be forgotten and ignored. This is the main reason that I go on living.”

The prime minister’s and the mainstream media’s coverage

After Nihat was killed as he was playing in front of his house, Ahmet Davutoğlu, the prime minister at the time and currently the chair of the opposition Future Party, had affirmed that the police were definitely not involved in the incident.

It was later revealed by security camera footage that it was indeed the police who had shot Nihat. 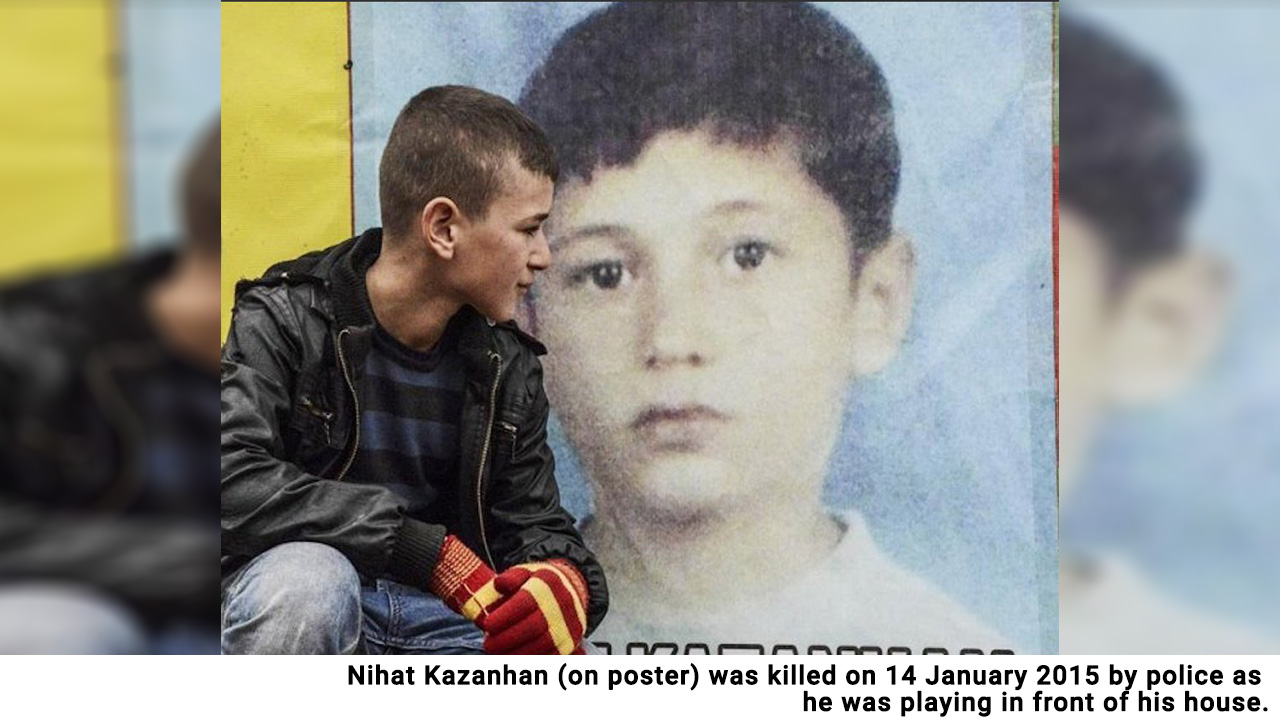 Mainstream TV CNN Türk had claimed on 29 January 2015 that the incident took place after a group of kids threw stones at the police, and Nihat was killed a few minutes later.

It was remarkable in terms of the media’s perspective as it was mentioned in CNN Türk’s story like a normal security procedure that the police ‘started targeting kids with gas’ after they threw stones.