Kurdish agricultural workers live and work in dire circumstances in Dersim. Residing in tents, they have no access to tap water, they work up to 17 hours a day and yet the wages they receive are hardly sufficient to feed their families.

The deepening economic crisis in Turkey has led to a dramatic increase in women’s poverty as women undertaking unpaid work domestically or working for extremely low wages find it hard to make ends meet.

Amid the overall economic collapse, the Kurdish-majority southeastern and eastern region faces a major economic crisis. Being a woman and a Kurdish citizen in the impoverished region adds to the layers of exploitation that one experiences.

Kurdish women working in the fields of Turkey’s eastern city of Dersim not only work in dire circumstances under the sun in inhospitable temperatures for up to 17-hours a day, but they are also not covered by any social protection measures. 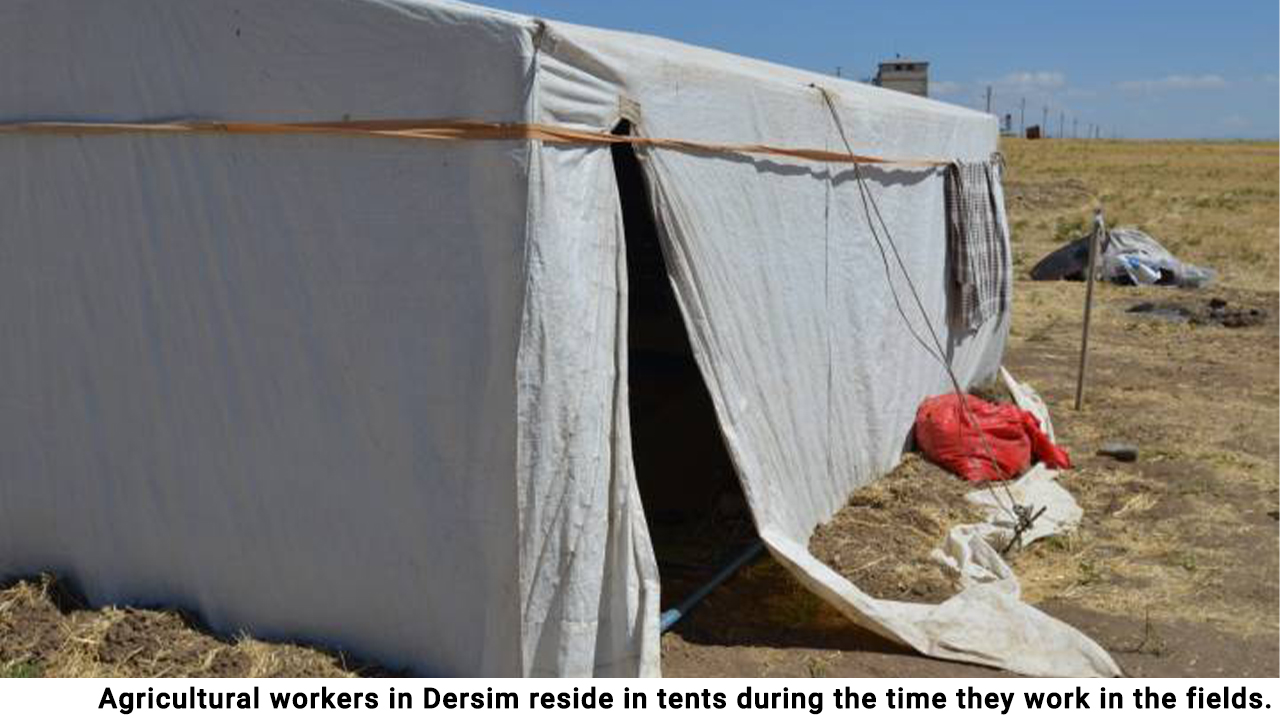 After a hard days work, many return to homes where they are subjected to gender inequality within the household, even as they have to take-on child-care, cleaning, cooking and other household unpaid duties.

27-year-old Meryem Barut is one woman working under such conditions. She works in the sunflower fields in the Akpazar (Peri) town of Dersim’s Mazgirt district. She states that since they are employed seasonally, each season they have to migrate from one city to another. 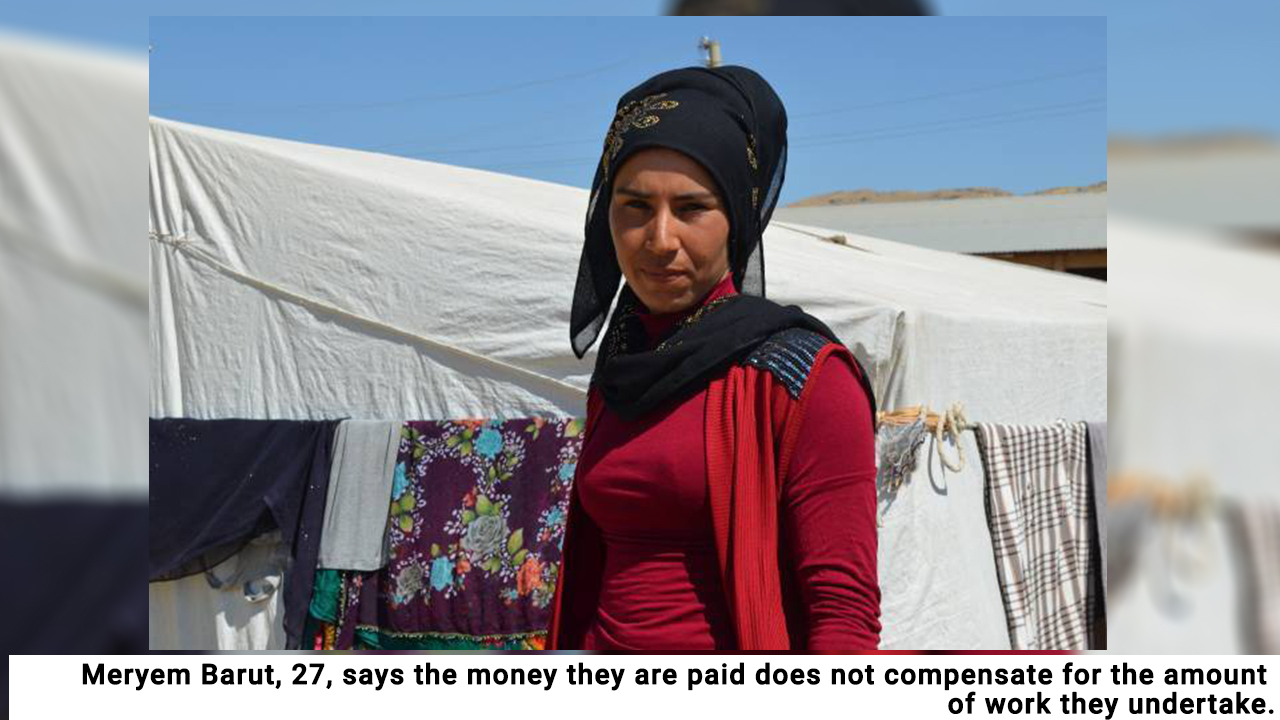 “Half of the money we are paid is wasted on the road travelling. The money we receive does not compensate for our efforts and our needs, but we have to do it,” she said.

Meryem noted that after work in Dersim finishes, they will have to move on to Sivas, a central-Anatolian city. But she has no belief or hope that she will find better working conditions there. “They do not treat us as human beings. No one asks if we are doing OK or not. The conditions imposed on us are inhumane,” she said.

“We stay in tents, transporting and carrying our water in bottles ourselves. Imagine – you have no tap water, electricity or toilet where you live. This is bottom-up torture, how we live here,” Rahime Öztürkmen, a 24-year-old woman working in the same field with Meryem, says. 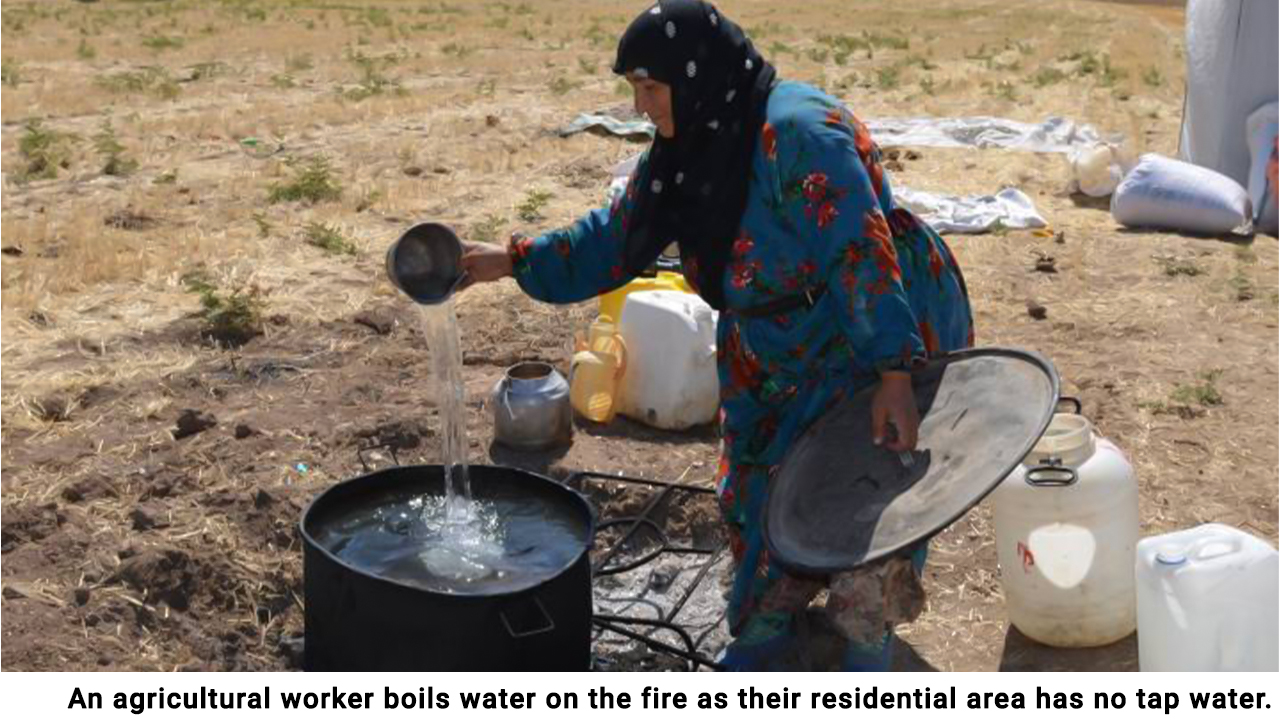 Rahime is young, but she has years of experience working in the fields as she has been working since she was a little girl. She has had to work non-stop, even during the times when she really needed to take time out. “I even worked during my pregnancy and after I gave birth. I had to,” she says.

“Most people working in the fields are women, because it is the women here who struggle to obtain bread the most,” she said. 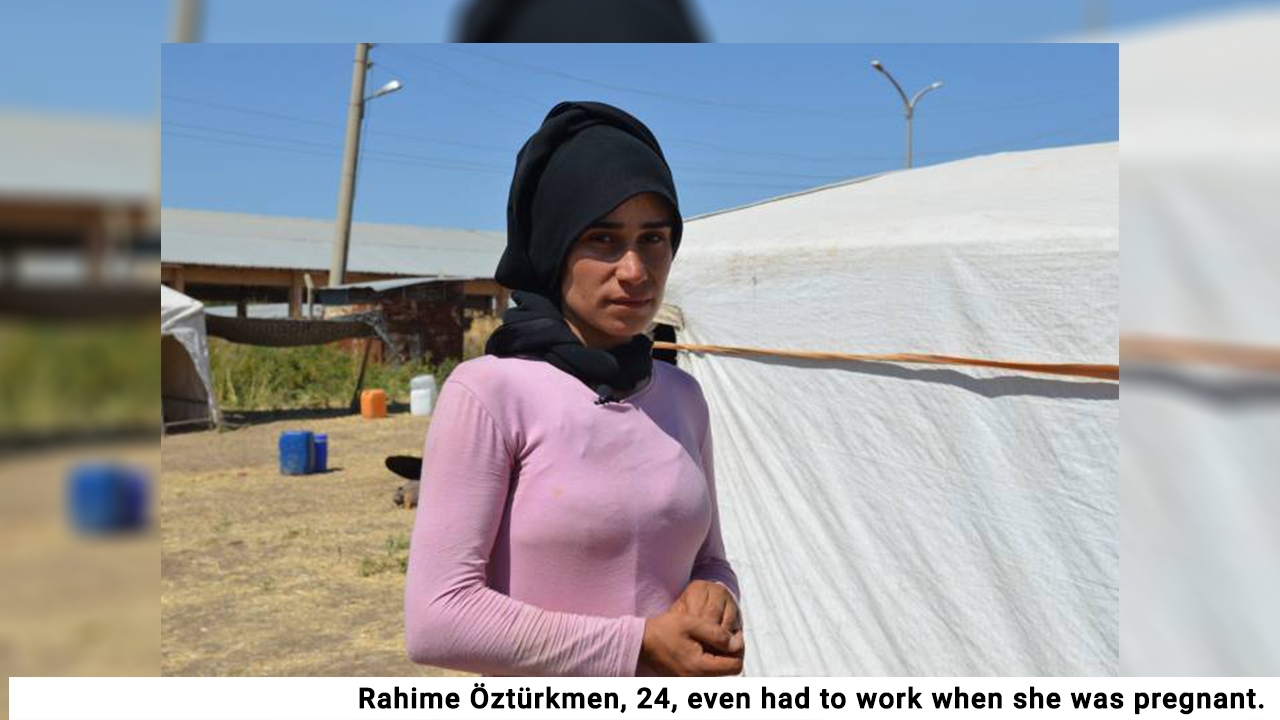 She draws attention to the gender pay gap: “We do the same work in the field, yet we are paid lower wages than the male workers.”

“We, as women, work more then the men as we also bear the responsibility of doing the domestic work,” she added. “Men go to the tents after their shift ends, have a good rest, but we keep on working. Most days, I can only sleep for a couple of hours due to the never-ending work.”

Harsh working conditions also impact Rahime’s and her working friends’ physical health. “Look at my nails,” she said, showing her hands. “All cracked. Look at our feet, all cracked, due to walking, wearing those shoes all day long for 17 straight hours.”

Rahime does not cry out for assistance but she demands that her most basic rights should be met. She demands insured employment and she demands to be treated as a human being: “Whatever happens, happens to women, not to men. Give us support, give us our rights, give us insured jobs and we will work. We say: Enough with this persecution.”