Haşim Gezer, the brother of Garibe who had been found dead in her prison cell on 9 December, called for lawyers' help to arrange a prosecutor to hear him about his latest phone conversations with his sister.

The imprisoned brother of Garibe Gezer, who had been found dead in her prison cell under suspicious circumstances on 9 December 2021, reached out from prison with a letter, calling for the intervention of his sister’s lawyers in an attempt by the prison administration to get a statement from him.

Upon her death, the Kandıra Prison administration immediately claimed that Garibe Gezer had committed suicide. This is a day after a parliamentary question was addressed to the Turkish ministry of justice by an MP for the People’s Democratic Party (HDP) regarding sexual incidents assault and torture incidents against her.

“Why had Garibe Gezer been untreated for hours after she attempted suicide as a result of the sexual assault and torture she had been subjected to? Why had she been isolated in a cell while at risk of making another suicide attempt?” 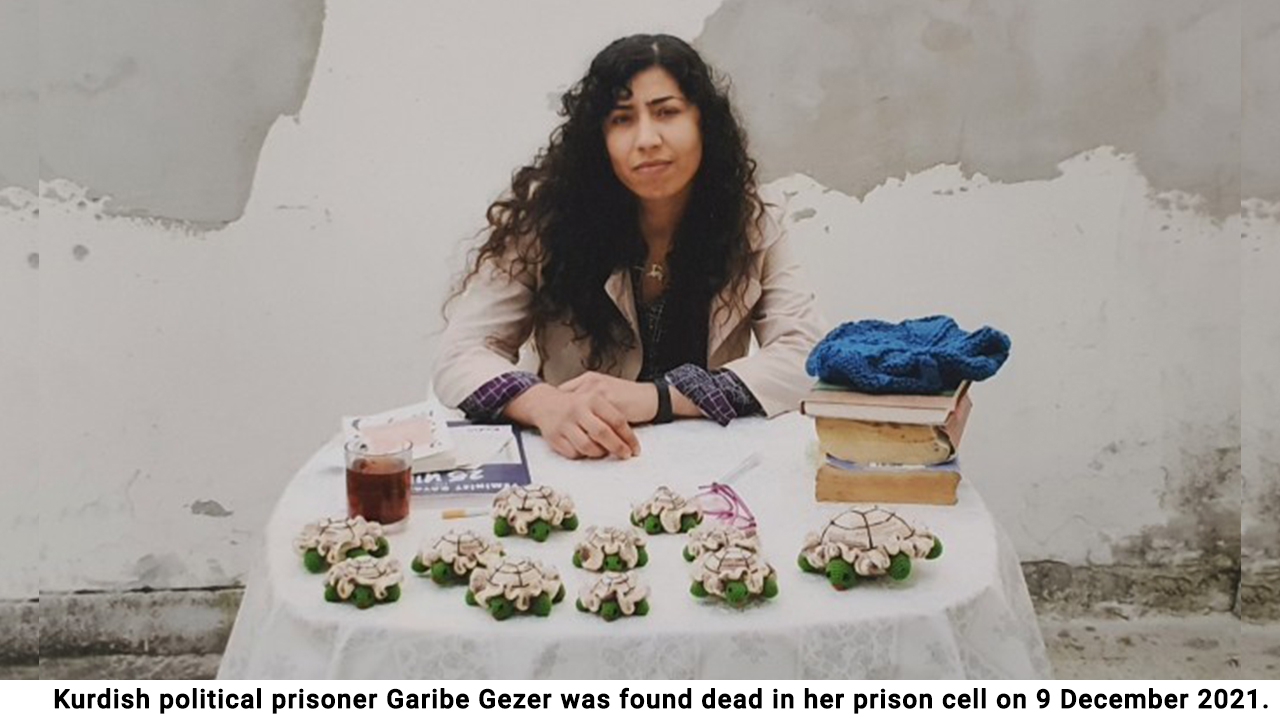 The autopsy of Garibe had also taken place in suspicious circumstances. The Forensic Medicine Institute authorities conducted the autopsy before Garibe’s lawyers could arrive at the Institute, and the initial autopsy report stated that the cause of death was ‘unknown.’

Garibe’s brother Haşim Gezer, also a political prisoner in Turkey’s eastern province of Elazığ (Elezîz), indicated that the Kandıra Prison administration asked him to make a statement through their audio-visual system regarding his recent phone conversations with his sister. He wrote:

“I am Haşim Gezer. I’m incarcerated at the high security prison no. 2 in Elazığ. I’m the elder brother of Garibe Gezer who lost her life in the Kandıra Prison. We used to talk once or twice on the phone every month. The Kandıra Prison administration informed me on the 14th of December that they want to talk with me through their audio-visual system about these phone conversations. I didn’t want to talk with them without the lawyers of Garibe present, because Garibe told me that she was kept isolated in a cell, and she was dragged naked on the floor when she was taken to the padded room, that they occasionally tore her dress apart both in the cell and in the padded room, and that she’d been physically abused and raped by male prison guards. They should have all these in the phone records. These must have been recorded by the central recording system.”

Haşim Gezer asked the letter’s recipients to contact Garibe’s lawyers and inform them about the letter. He also called on her sister’s lawyers to contact him and arrange that a prosecutor gets his testimony on his recent phone conversations with Garibe.

Haşim Gezer, who wasn’t allowed to attend his sister’s funeral, had earlier been subjected to violence in prison as well. In November 2019, he’d been brutally beaten by prison guards and, for months, wasn’t taken to the hospital for treatment despite broken ribs.