Amid the appeals by IHD volunteers to Turkish authorities to urgently release seriously ill prisoners, three such prisoners in the past two days passed away in what the human rights defenders called a "massacre."

Halil Güneş, who was jailed in Diyarbakır High Security Prison, in Turkey’s southeastern Diyarbakır (Amed), was pronounced dead behind prison walls on 15 December.

“He had infected scars on his body. They took him to the hospital for that and upon their return, they placed him in quarantine in the prison. The prison administration told us not to visit him this week, and assured us that they were checking on him every half an hour, but obviously they lied,” Gül Güneş, the sister of Halil Güneş, told MA after she heard the news of the death of her brother.

Güneş was on Turkey’s Human Rights Association’s (IHD’s) list of seriously ill prisoners, but despite the IHD’s repeated appeals to act, Turkish authorities refused to release him. Güneş was arrested in 1993, when he was only 23, and served 29 years in prison on an aggravated life sentence.

Whilst the preliminary autopsy report of Güneş was not given to his lawyers, lawyer Yusuf Çakas criticised prison officials for not taking immediate action despite the fact that the camera footage from his cell indicated that Güneş was suffering from heavy pain on the night of 14 December, before he died.

“Until 3am in the morning, he writhed in his bed and it was recorded by the cameras. The prison officials said after 3am, he stopped moving and they thought he fell asleep,” he said.

“This is against the natural flow of life that an ill prisoner who was staying in his cell in solitary confinement for five days, kept moving in his bed until 3 am. That means that he was in pain, that he was suffering. We cannot accept the fact that they did not act when they could have.”

“We will receive two deceased bodies. We don’t want this injustice anymore. Which doctors let this happen? What kind of medicine let these happen?,” İnci Güler, sister of another ill prisoner, Abdülselam Güler, told MA.

“How can doctors let a cancer patient be left in prison, all alone, in such circumstances that lack hygene and care and justice? This is shameful,” she stated. 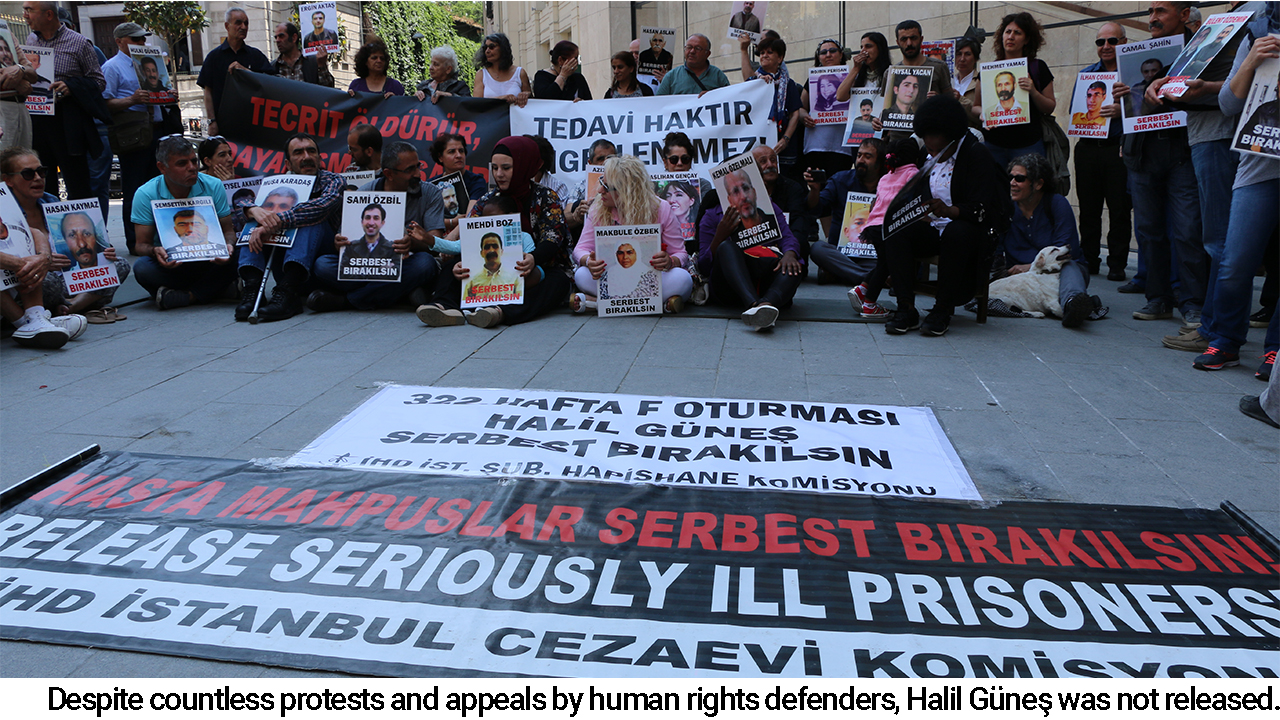 There have been many peaceful protests and press statements organised by human rights defenders calling for the release of Halil Güneş, warning Turkish authorities that Güneş was not eligible to remain in prison.

In a previous press release organised by the IHD in Istanbul, Gülseren Yoleri, the co-chair of the Istanbul branch of the IHD, had stated that Halil Güneş had sent several letters to the IHD and other NGOs as well as to the Ministry of Justice and the Directorate General of Prisons and Detention Houses, but Turkish authorities had remained silent about his case.

“He became ill after the torture he was subjected to by the anti-terror branch of Diyarbakır police department. His health got worse immediately after the torture session during the time he spent under police custody and he was hospitalised,” Yoleri said.

Güneş’s illnesses arose after the severe physical torture he was subjected to in detention, as Yoleri and many human rights activists in Turkey highlighted.

Having his ribs broken after an episode of torture, Güneş’s broken ribs caused pressure on his heart and lungs resulting in shortness of breath and many linked health problems eventually turned into grave diseases due to his poor prison diet and the poor living conditions in prison.

Güneş had long suffered from lung and bone cancer and had been admitted to 15 different prisons since his arrest as part of a “disciplinary penalty” system adopted in Turkish prisons, by which political prisoners are forcibly transferred from one prison to another to cut their bonds with fellow political prisoners as well as with their visiting family members as a way of ‘punishing’ them.

A tomography revealed in 2007 that Güneş’ dozens of tumors – about 1 cm in size – had spread to his lungs. During surgery of his broken ribs, he was diagnosed with bone cancer. Having had two surgeries for cancer, Güneş was diagnosed with “severe chronic obstructive pulmonary disease,” known as COPD and “sleep apnea.” Doctors suggested he sleep on a ventilator for the rest of his life and wear an oxygen mask during the day. 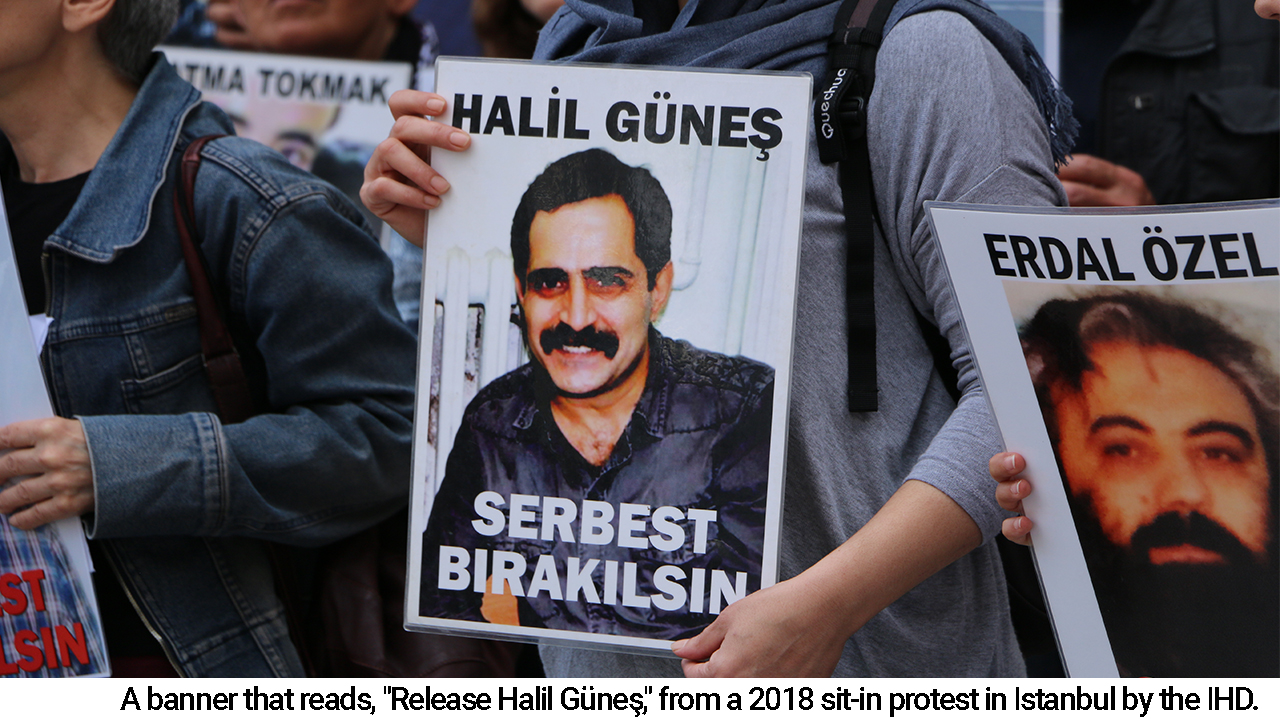 His mother, Sedef Güneş, had long been campaigning for the release from prison of her son.

During an interview with DIHA news agency in 2014, Sedef Güneş shared their demands and efforts to reach the Turkish authorities.

“All we demand is peace: let there be no deaths anymore. We don’t want people dying and mothers crying. We don’t want neither the soldier, nor the police officers, nor the civilians, nor the guerrilla, nor those in prison to die,” she said.

“Let there be no coffins coming out of prison anymore. Our hearts are torn. We have gone to Ankara, countless times. We go to the Ministry of Justice, we go to the Prime Minister. They all say, ‘OK,’ but then they do nothing.”

In another interview in 2014, Sedef Güneş spoke about how the medical reports regarding her son’s health had been rejected over and over again.

“How can I tell you how hard this bureaucracy is?,” she said. “His reports went everywhere, but they all were returned back, as they said there was something ‘missing’ in them. So they would send him back to a hospital, and start the process again from scratch,” she said.

It has been so hard for Sedef Güneş to speak out about the illnesses of Halil, because she has had to repeat the fact that his illnesses started with the physical torture he was subjected to and his health has progressively deteriorated during his years in prison.

“He was very young: he was such a strong 21-year-old boy. Imagine what would happen to you if you were to spend more than 20 years in prison; if you were subjected to all that torture. He has wasted away,” she said.