‘They do not even deem us as human beings, but as terrorists,’ says Political prisoner’s sister

The sister of Abdülselam Güler, a political prisoner, who has already spent 29 years of his life in prison, says she has been struggling each and every day since her brother was arrested.

Families of prisoners, who are seriously ill or kept behind bars for political reasons or whose release has been prevented despite the completion of their sentence have been taking part in a peaceful vigil for justice for 29 days now in Diyarbakır (Amed) Bar Association’s building, in Diyarbakır.

İnci Güler Altındağ, sister of Abdülselam Güler, who is currently jailed in Diyarbakır F-Type High Security Prison, has been taking part in the vigil since the first day.

Absülselam Güler was arrested after a home raid in 1993 and after the change in the law that on the serving of prison sentences, he was denied release even though he had served the period of time that normally would have meant a prisoner was released on parole. 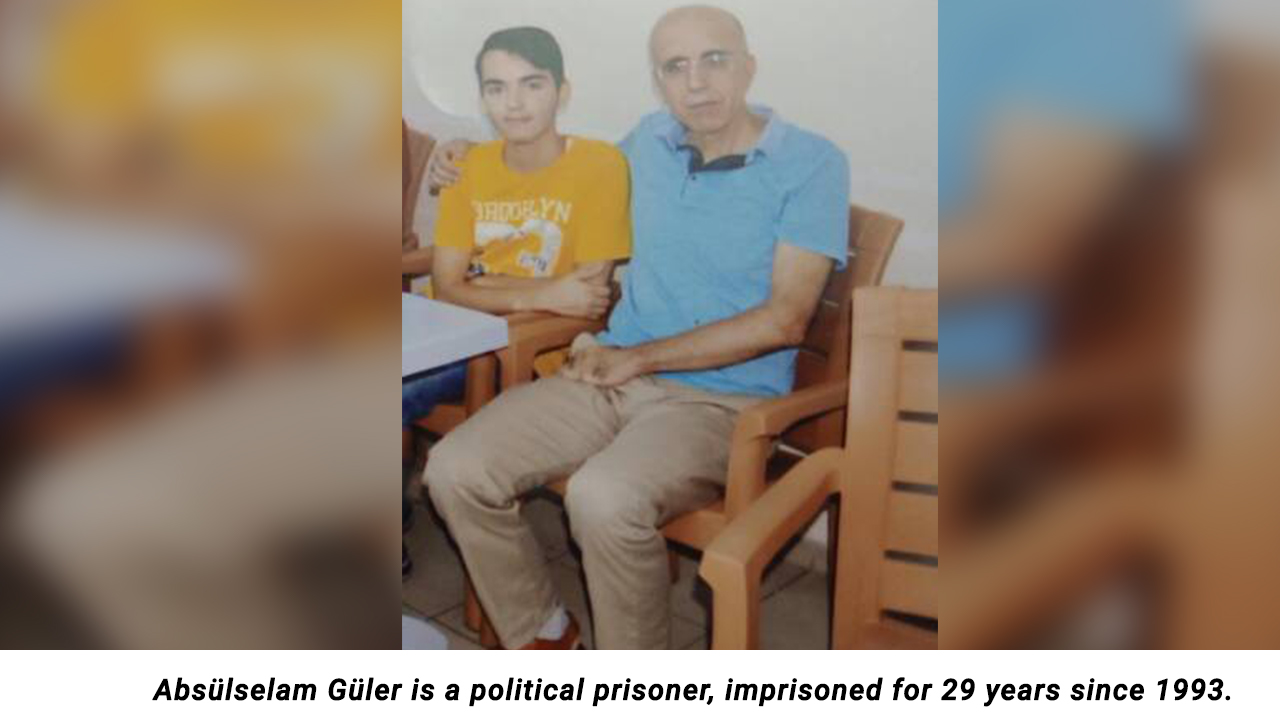 She told ANF that for the last 29 years her brother has been in jail, the last two years has been the hardest as violations of prisoners rights have hit a peak.

“It’s such a hard process. As they have been in jail, we have also been living a life in jail as well,” she said.

“They do not even deem us as human beings, but as terrorists. With all kinds of suffering and sorrow, we haven’t been able to live our lives.”

Counting more than three different cities in Turkey that her brother has been in jail, including a Black-Sea town Ordu, Bandırma and Diyarbakır, she explained about the continuous transfers of her brother from one prison to another. She refers to these as “exile transfers”.

“To stop families visiting them, they have transferred our loved one from one prison to other. It has not been an easy to visit them. They have done all they could to the prisoners and their families,” she said.

“But this is the worst process we have seen,” she added.

“He has been in prison for almost 29 years now. We have not seen as much repression as we have seen in the last couple of years. The repressive policies continuously increase.”

Güler says the repression by the Turkish authorities had caused their parents to lose their health and die prematurely.

“Both our parents suffered from health crises. Our mother suffered from the grief of her child. She had passed away before she was able to see her son,” she said, holding her tears that were about to fall down her cheeks.

“May God not have mercy on such cruelty,” she shared in her pain, adding, “My mother passed through such though times. She suffered from high blood pressure. In the end, she was bedridden. She spent 18 years bedridden, not being able to visit her son.”

Their father died of a heart attack in 2006, as she says his heart couldn’t take the pain anymore. “They both passed away relatively young ages. My father passed away when he was only 61.”

Her life has also been shattered, as she says she has always lived in pain and suffering. She only has memories with her brother when she was still a young girl.

“We grew up together, but then we were shattered. I don’t recall any memories of him since most of my life he was in jail and we couldn’t have the chance to make memories together.”

This has affected her quite badly. “Nothing was easy for us. Until this age, I always had to struggle with suffering and pain. But the pain now is bigger now than it ever has been.”

Güler Altındağ will continue her vigil for justice in the large meeting room that the Diyarbakır Bar opened for them, but this action might turn into something bigger if the Turkish authorities keep disregarding them.

“We will wait here for a while, but not forever. If they do not hear our voice, we may go to Ankara next, to the Ministry as well,” she said.

“We will not stop. We are behind our loved ones. They are not abandoned, let everyone know that.”