The Turkish Foreign Ministry has threatened South Kurdistan officials over the presentation of a map of Kurdistan on one of the featured stamps commemorating the Pope’s visit to Erbil on 7 March. The Pope’s four-day historic visit took place from 5-8 March and covered five cities, including Baghdad, Erbil, Mosul, Najaf and Nasiriyah.

The Ministry of Transport and Communication of the Kurdistan Regional Government (KRG) exhibited six stamps at Erbil Airport. On one of those stamps was a picture of the Pope and a map of Kurdistan behind him. The Turkish state was enraged by this act and has exhibited its intolerance to the existence of ‘Kurdistan’ – this time by protesting over the map displaying ‘Kurdistan’.

On 10 March, the Turkish Foreign Ministry issued a statement addressing the region’s authorities, stating: “During the visit of Pope Francis, several commemorative stamps were printed by the Kurdish administration in Northern Iraq, one of which presented a map that includes several cities in Turkey, so the Regional Government of Northern Iraq must take immediate steps to correct this grave mistake as soon as possible. Some of the regional government officials, who do not know their borders, have tried to use Pope Francis’ visit to reveal their wildest fantasies which affect the unity and territorial integrity of neighbouring countries”. 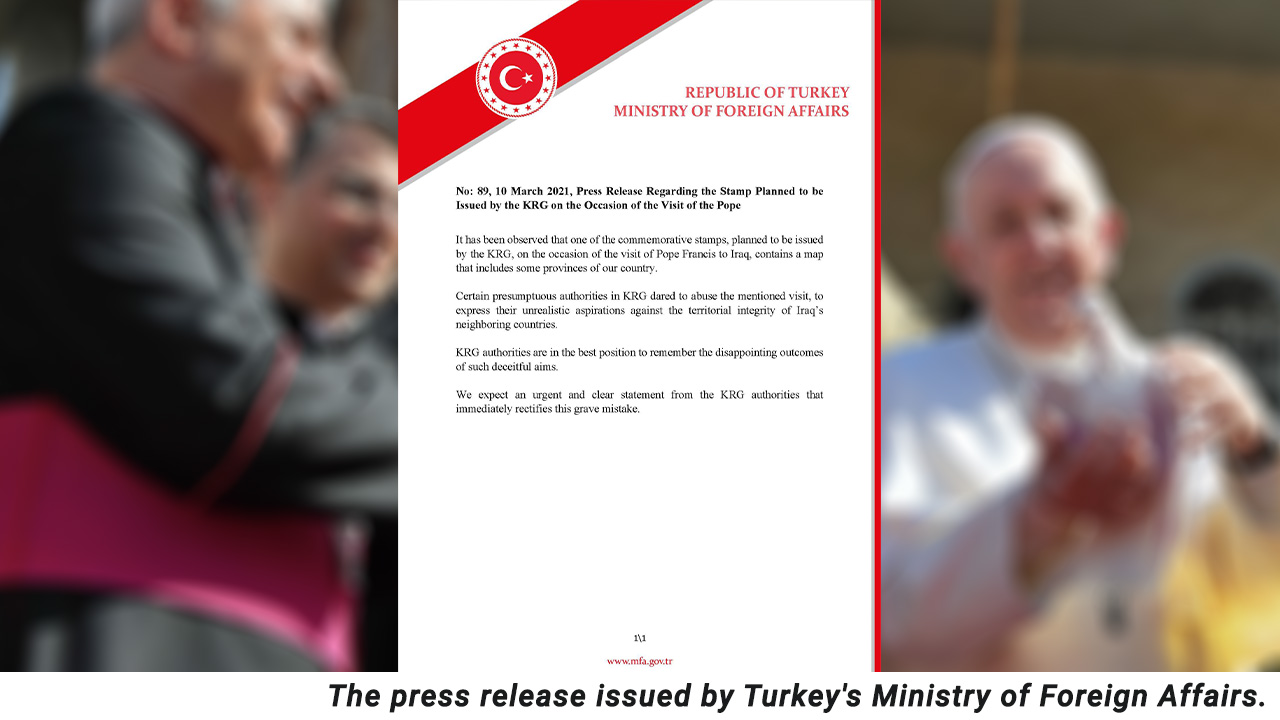 Another section of the statement reminded the Kurdistan Region officials of the referendum that took place in 2017. The Turkish Ministry statement continued: “The administration of the Kurdish region of Northern Iraq remembers very well how their attempts to achieve these endeavours failed”. At the end of the statement, a request for clarification and retraction from the officials of the Region was made: “We are waiting for the immediate correction of this dangerous mistake”.

Pope Francis, leader of the Catholic Church, embarked on a four-day trip to Iraq, where he met with officials, religious leaders and ordinary Iraqis of all faiths on 5 March at the invitation of the Iraqi government and the local Catholic Church. The Pope also visited the ancient city of Ur, Erbil (Hewler) and Mosul and paid a visit to Ayatollah al-Sistani, the spiritual leader of Iraq’s Shia community. This meeting has been considered as a milestone in the history of interfaith dialogue.

The visit to Mosul was considered particularly significant, as the city was known as an Islamic State of Iraq and Syria (ISIS, also known as the Islamic State, or Daesh) stronghold. In Mosul, he noted: “How cruel it is that this country, the cradle of civilization, should have been afflicted by so barbarous a blow, with ancient places of worship destroyed and many thousands of people – Muslims, Christians, Yazidis and others – forcibly displaced or killed. Today, however, we reaffirm our conviction that fraternity is more durable than fratricide, that hope is more powerful than hatred, that peace more powerful than war”. Pope Francis added that hope could never be “silenced by the blood spilled by those who pervert the name of God to pursue paths of destruction”.

Pope Francis also met the father of Alan Kurdi, the young boy who drowned alongside his mother and brother when a boat transporting them as refugees to Europe capsized off the coast of Turkey. The Vatican, in a statement, noted that “the pope spent a long time with him and with the help of an interpreter, was able to listen to the pain of a father for the loss of his family”.

The historic visit was the Pope’s first overseas trip since November 2019 and his first trip to the Middle East since February 2019, when he visited the the United Arab Emirates. Iraq’s Christian communities have been devastated by sectarian warfare since the US-led invasion (which reportedly has seen the Christian population drop by 80% in size due to deaths, forced relocation and uncertainty about their protection, especially also after 2014, when the ISIS attacks began to sweep through the country). In Mosul, where the Pope visited Church Square to pray for the victims of the war with ISIS, he stated that the exodus of Christians from Iraq and the broader Middle East had led to “incalculable harm not just to the individuals and communities concerned but also to the society they leave behind”.