The story behind the ‘450g’ of remains: Hediye Balur and Turkey’s necropolitics

The 450g of remains of a female fighter, who could only be properly buried 178 days after her passing, is a statement of an unspoken truth about Kurdish fighters killed in clashes with the Turkish armed forces: Even their right to a decent burial is not granted, and their families are subjected to mental anguish just to be able to claim the remains of their loved ones.

Sometimes the numbers tell much about the deep dark dimensions of war. The values of numbers change to unimaginable degrees when it comes to Kurdish fighters, whose deceased bodies have always been discussed in numbers.

The 450g of remains of a 27-year-old female fighter, who could only be properly buried on 1 November, 178 days after her passing, is a statement of an unspoken, uncanny truth about the Kurdish fighters who are killed in clashes with the Turkish armed forces.

This is the story of Hediye Balur, nom de guerre Silav Ronahî, whose story did not end when she was killed during a bombardment in Mardin (Mêrdîn) in southeastern Turkey. 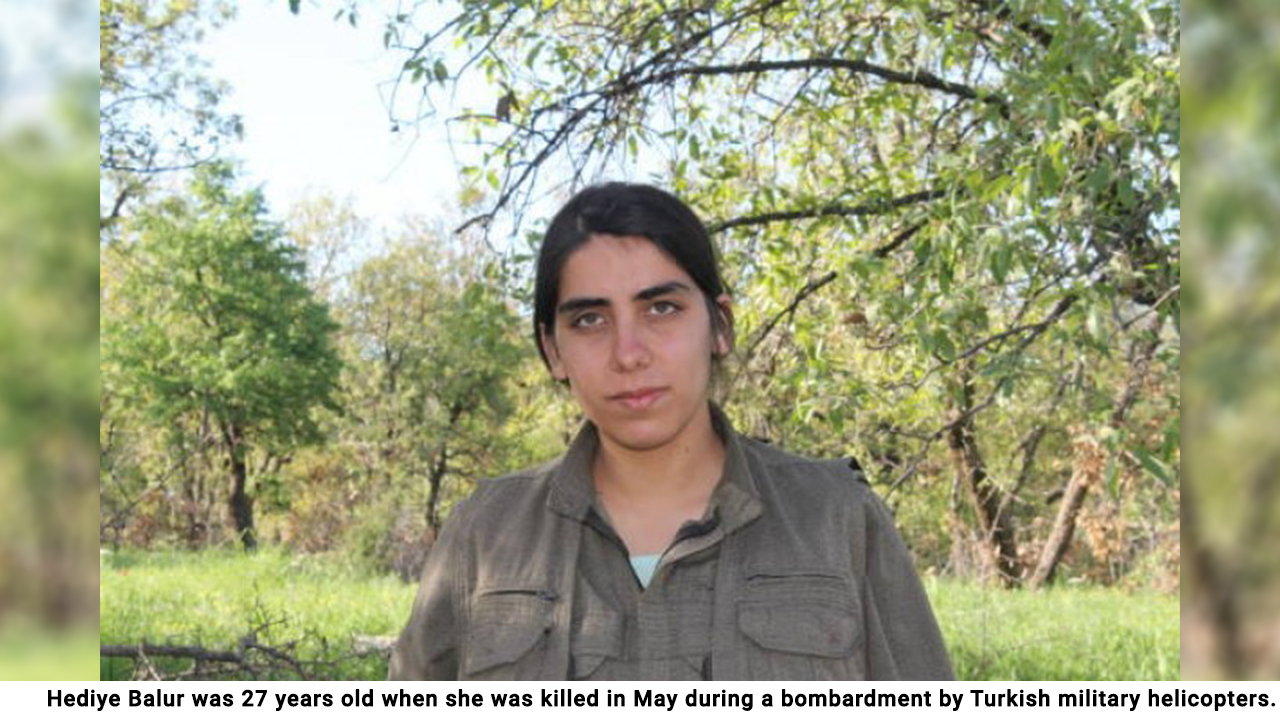 Balur was killed by an airstrike launched by Turkish army helicopters after armed clashes erupted on 7-8 May between Kurdish fighters of the People’s Defence Forces (HPG) and the Free Women’s Units (YJA star) on the one hand, and Turkish armed forces on the other, according to ANF.

Balur, who had been fighting as a commander in the ranks of the all-female YJA-star since 2017, was born in the southern region of Adana in 1994. She became known for her dedication to the armed struggle after she experienced the round-the-clock curfews imposed on seven Kurdish-majority cities for varied durations between August 2015 and January 2016, according to a short biography produced by the ANF.

The civilian death toll exceeded 200 during these large-scale curfews according to local human rights associations.

When Balur was killed in May, her family were not able to see her or to organise a proper burial ceremony, and it was only in September that they were summoned by the prosecutor’s office in Mardin (Mêrdîn) to receive her remains, which only weighed 450 grammes.

Despite the fact that they responded immediately and went straight to Mardin, the family’s request to receive their daughter’s remains was once again rejected, and they were made to wait yet again until 1 November, for the results of a DNA test, in order to bid her a final farewell after a struggle of 178 days.

Only a limited number of family members were able to attend Balur’s funeral ceremony at her final resting place in the cemetery of Şex Hesen, in Şırnak (Şirnex), eastern Turkey, and it could only be held late at night. 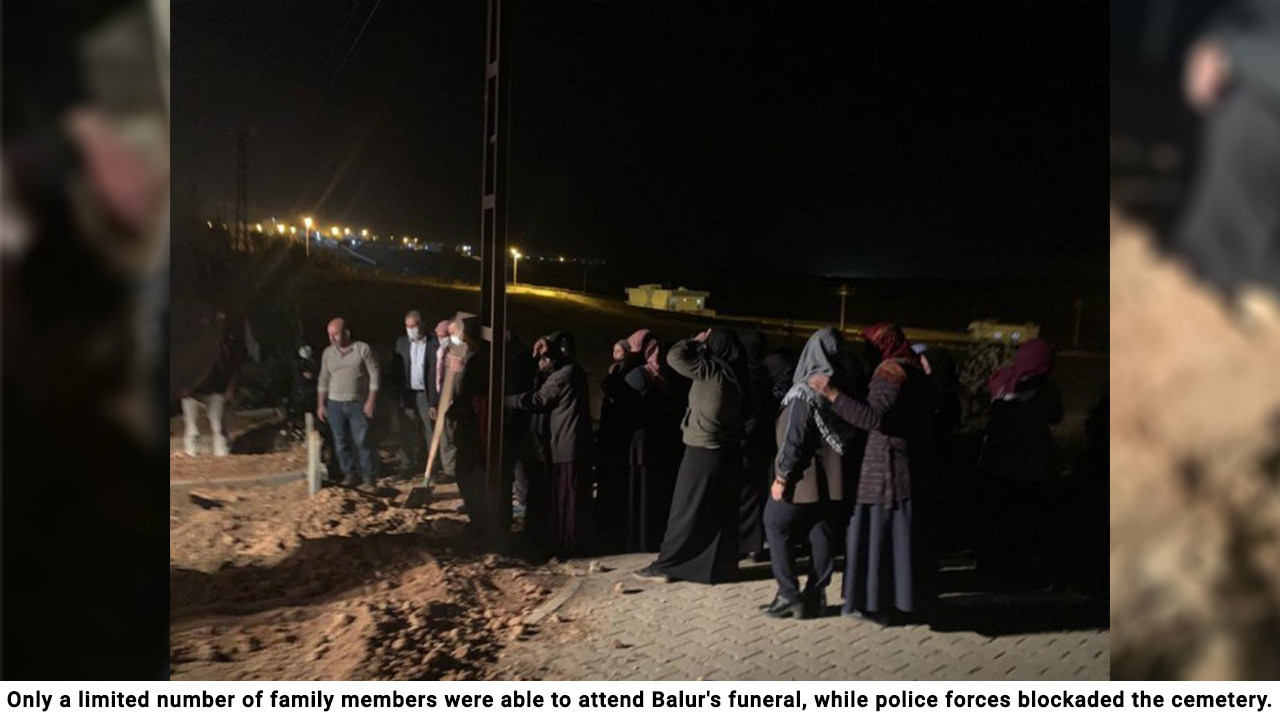 “It would be worth the fight even for a single hair of her head. All the mothers have to wage this struggle. I wish mothers would not have to shed a tear, I wish our children could be the last to lose their lives,” Emine Balur, the mother of the Kurdish fighter told MA after the funeral.

Emine Balur tells of a meeting she held with the prosecutor during the 178 days that they were trying to claim her daughter’s remains.

“Pray to God,” the prosecutor told her, “Some mothers never receive the remains of their children.”

“This is a policy with a purpose. Maybe they are afraid of the women or of the fact that women are fighting against them, but they have this policy directed at the deceased bodies of women,” she said.

Even as they struggled with the pain of losing their daughter and the anguish of coping with 178 days of Kafkaesque injustice, Emine Balur and her family were threatened during the funeral by police officers who said: “If you chant a single slogan, we will not let you carry on with the burial.”

After all that, Emine Balur says, they still stood with heads held high.

“The seven months of torture we had to endure finally came to an end. I am at peace now, I feel like as though my daughter has come home. My daughter fought and died for something she believed in. That’s why our heads will always be held high.”

Speaking to MA during the days of their struggle, Mehmet Balur, the 57-year-old father of the Kurdish fighter, said that he had first heard the bad news from a Turkish officer, who had called him and told him on the phone, “We have killed your daughter, come and collect her.”

“They apply policies of hostility against us. We can expect any evil deed from them as they are completely lacking in conscience,” he said, adding, “This is a fascist mindset, which has never changed. We have been killed over and over again for a thousand years.”

“My pain is too great to describe with words, but my honour and dignity are much greater than my pain,” he concluded. 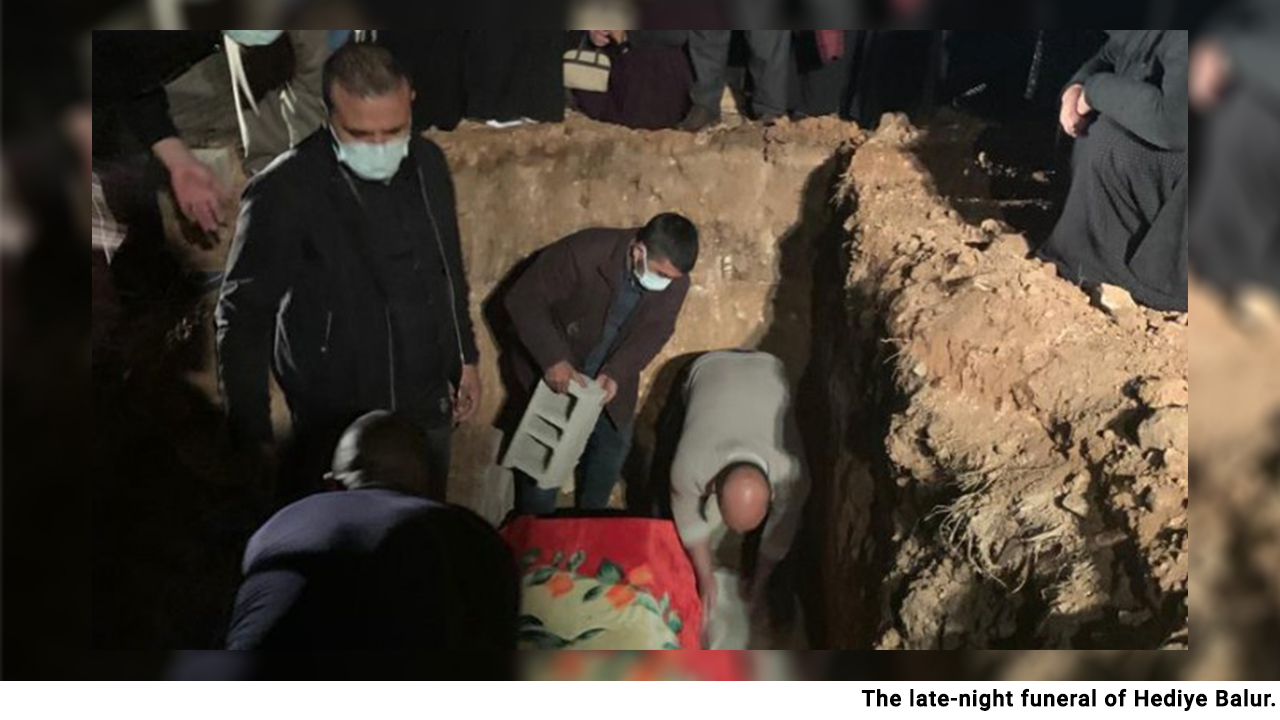