The Ramifications of the 12 September 1980 coup d’état The Kurdistan Communities Union (KCK) launches its “Stop Isolation, Fascism, Occupation: Time to Achieve Freedom” initiative today, on the fortieth anniversary of the 12 September 1980 coup d’état. The ramifications of the coup d’état have been far-reaching.

According to the KCK: “The Justice and Development Party (AKP) is a consequence of the 12 September 1980 coup d’état, and the ‘genocide project’ against Kurds has been continued by the AKP. The US had aimed to use Turkey, ruled by a collaborative political Islamist government, in its intervention plans for the Middle East.”

“The Destruction Plan has been implemented under an alliance with the Nationalist Movement Party (MHP) and the organization of Ergenekon. The US, which aims to reshape the Middle-East for its interests, also targets the Kurdistan Workers Party (PKK) to weaken it in the region”.

In investigating the events surrounding the 12 September 1980 coup d’état, Harriss, an investigative researcher, has concluded that “it cannot be seriously denied that in the case of Turkey, it was perceived by NATO that western interests would best be served by the overthrow of democracy”.  Nicole and Hugh Pope, in ‘Turkey Unveiled: A History of Modern Turkey’, have established that “Washington” was “thoroughly relieved” by the success of the coup and “sent a statement of support and made sure the taps of international finance remained open… Strong backing from Washington was”, indeed, a “key element in the junta’s success, with the United States anxious to prove … that its austerity-led International Monetary Fund packages could fix inflation-ridden economies. During those years, Turkey was receiving nearly one billion dollars a year of American assistance, third in the world after Israel and Egypt. Within months of the coup, new American and British credits were approved”.

US support for coup leader, Turkish General Kenan Evren, has been detailed in several studies. The general reportedly commanded the NATO and CIA backed ‘Counter Guerrilla secret army’ at the time of the coup. “Years later”, Daniele Ganser informs us in his book ‘NATO’s Secret Armies: Operation Gladio and Terrorism in Western Europe’, “Carter commented that ‘before the 12 September movement, Turkey was in a critical situation with regard to its defences. This movement for stabilisation in Turkey came as a relief to us’”.

İsmail Beşikçi has established that a ‘Turkish-Islamic Synthesis’ was realised and it was used by the state to politically and religiously incite people and fascist armed groups against Kurds and Kurdish organisations. According to Elif Savas and Brian Felsen’s 1999 documentary entitled ‘Coup’, US ‘deep state’ networks and assets ‘guided’ the Turkish state in these ‘anti-communist’ and anti-Kurdish ‘initiatives’.  Ali Kılıç, publisher and member of the Workers Party, interviewed in the documentary, concluded that: “There was nothing that America (i.e., the US government) wanted from the 12 September coup that it could not get. The economy was placed under the control of the International Monetary Fund and the World Bank.  In some ways, the coup was made in order to put those programmes into place”.

In seeking to utilise religion for its own ends, the Turkish state, as Garbis Altınoğlu has documented, “tried to portray itself as ‘the defender of the faith’, while vilifying the PKK as an atheist and anti-Muslim organisation led by Armenians. It should be remembered that, at the time, the Turkish army had prepared leaflets adorned with sayings from the Koran”.

People were “exhorted to fight against the PKK in the name of Islam”, he notes. “After all, during the first half of the 1980s, these so-called secular Turkish generals were propagating a reactionary ideology called the ‘Turkish-Islamic Synthesis’, which they almost elevated to the status of the official ideology of the Turkish state”.

John Tirman, in ‘Spoils of War: The Human Cost of America’s Arms Trade’, informs us that “the generals had been planning the coup at least since 13 December 1979 when Evren returned from a NATO meeting in Brussels. The Carter administration embraced the military junta as a reliable ally in its design for the region; the incoming president, Ronald Reagan, would tighten that embrace throughout the coming years even more enthusiastically”. 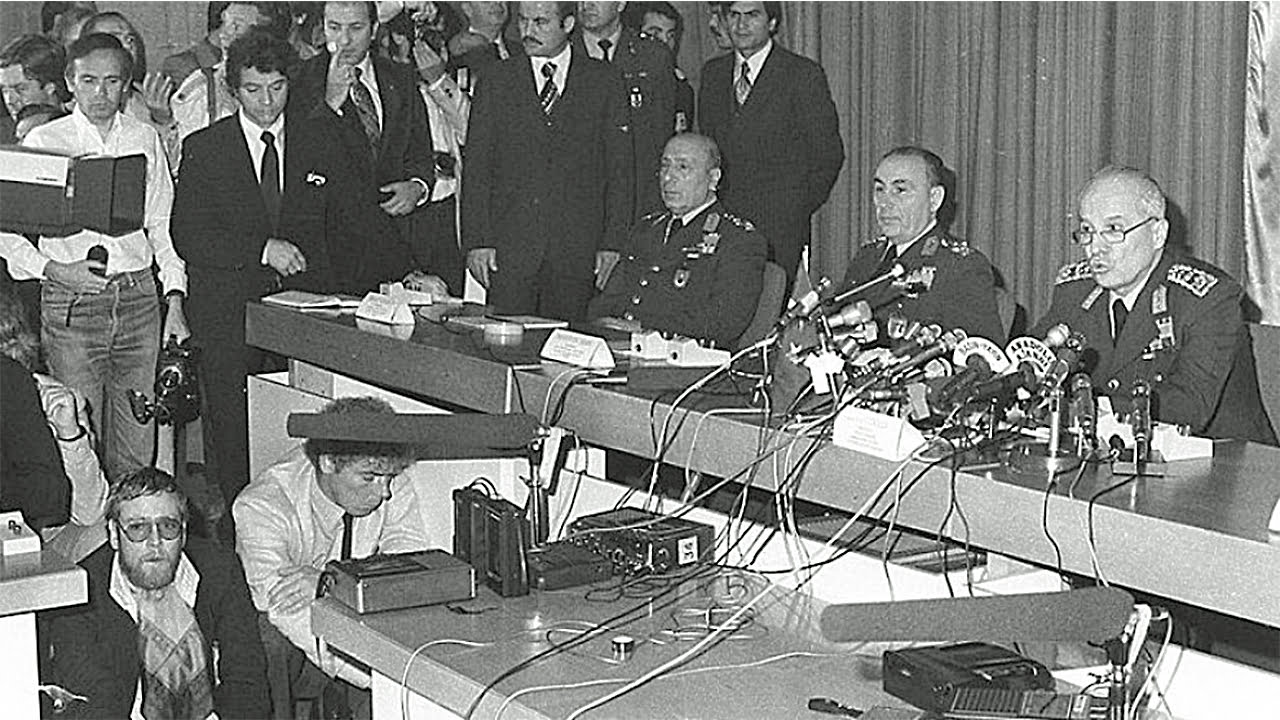 Speaking about the CIA-NATO ‘secret Gladio Counter Guerrilla’ army that had been mobilised, former Prime Minister Bülent Ecevit revealed on 13 November 1990 that: “I was told that it was financed by the United States. Its members were trained in special warfare techniques”, Ecevit reported Ganser, “stressed” that this army “had been repeatedly involved in torture, massacres and assassination operations, as well as coup d’états the country had suffered from and was presently employed to fight the Kurdish minority in the country”.

According to McDowall, the ‘Idealists’ (‘Ülkücüler’), also known as the ‘Grey Wolves’ (‘Bozkurtlular’), “were associated” with the MHP and “were extremely hostile to Kurds and communists, believing in the words of the ideologue, Hüseyin Nihal Atsız: ‘One who does not have Turkish blood is not Turkish even though he does not speak any other language except Turkish’, while communists were ‘people who are racially degenerative, villains, whose origins are not known and who are not Turkish’. The Grey Wolves believed it their duty to expunge ‘the enemy within”.

Saley Aay’s study similarly concludes that the coup “was engineered not by fringe groups with fringe agendas but by the web of security agencies that had been woven by the CIA. Following the coup, the disappearances, murders, arrests and tortures” of Kurdish and other ‘radical activists’ “increased in volume and intensity. Henze’s CIA coup – which was engineered by his good MHP friend, Türkeş”, had amongst its goals the need to “combat the growing unrest in Kurdistan”.

The generals behind the coup, stated David McDowall in ‘A Modern History of the Kurds’, “made it clear that they intended to brook no expression of the Kurdish movement or identity whatsoever”. US Secretary of Defence, Weinberger, expressed his desire “to be of as much assistance as we can be” to the military junta.

After the coup, Zeynel Abidin Kaya, a Kurdish scholar, personally experienced the way in which “State terror increased day after day. Daily life in my country was characterised by mass arrests, torture, killings and deportations. I was one of the 10,000 prisoners. They didn’t accept us [Kurds] as human. They wanted to kill us physically and psychologically. Therefore, they used all kinds of torture on the captives”. İsmail Beşikçi asks us “not to forget the murder of over 40 revolutionaries and democratically minded individuals through torture in Diyarbakir prison in the aftermath of 12 September. They were killed for defending their Kurdish identities”.

Writing in 1982, investigative journalist Dominique Callimanopulos noted that “of 70,000 political detainees, more than 20,000” were “reportedly Kurdish, and 90 percent of these” were “reputed to have been peaceful protestors for Kurdish cultural rights. Arrests in Kurdish provinces have totaled 81,634. Of these, 378 have allegedly been tortured to death, and 374 have been killed in night-time attacks. Kurdish insignia is outlawed. In Diyarbakır, twelve persons were arrested for selling Kurdish music cassettes. The owners of shops with Kurdish names were threatened and ordered to change the signs. It was also illegal for parents to give children Kurdish names; they had to select Turkish names or face punishment.  Thousands of Kurdish names were forcibly changed”.

“Turkey” at this time was even “not content to persecute Kurds sorely within its borders. In 1980, the Turkish Embassy in Denmark ordered the Union of Workers from Turkey to discontinue a Kurdish language course organized by the Copenhagen Evening School. The course was aimed at incorporating Kurdish in the home language teaching programme in Danish, Norwegian, Swedish, and West-German schools”, she added.

“If your ID showed you were born in a Kurdish region, you could be arrested, and many of my relatives, friends, and neighbors”, Ayce Aktürk recalls, “were detained and tortured”. At least 1,790 suspected members of the PKK were captured, alongside several members of its central committee, and several leading PKK members were killed in detention. Reportedly, 122 death sentences on PKK members or alleged members were passed and 150 were additionally demanded.

According to the investigative journalist Chris Kutschera, “prison conditions were so harsh that prisoners staged prolonged hunger strikes that lasted more than a month at a time, or, in more than few cases, committed suicide. On 21 March 1982, Mazlum Doğan lit three matches to celebrate Kurdish Newroz and hanged himself in his cell rather than make a televised confession. In Kurdistan, the extent and ferocity of the repression decimated the Kurdish parties”. Death fasts were undertaken by PKK members in the prisons, led by PKK founding members Kemal Pir, Hayri Durmuş, Ali Çiçek and Akif Yılmaz.

The legislation was passed which intensified the process of cultural genocide of Kurds. Baskin Oran confirms that “there was a military prosecutor in the 1980’s, who in his indictment said: ‘In the East, it snows, then it freezes; and when stepped on, this snow produces khart-khurt sounds. The word Kurd has derived from this, so there is no such group as Kurds’”.

As the late Yaşar Kemal observed: The coup “not only forced intellectuals to keep their heads down, not only threw hundreds of people into prison and tortured them. The entire country cowered in fear, was made degenerate and driven further from humanity. It made informers of ordinary citizens, created bloody wolf-mouthed confessors, and totally destroyed human morality”.

According to the Info-Turk Foundation, apart from the abolition of the last remnants of the freedoms that the 1961 Constitution had recognised, the coup ushered in a period in which:

* The fundamental rights of the Kurdish people and the Armenian, Assyrian and Greek minorities of Turkey were denied. The controversial economic restructuring of the country took place even as independent trade union rights were curtailed.
* More than 650,000 people were taken into custody (many of whom were subsequently tortured).
* 500 people “lost their lives in custody”.
* The disabling of “thousands of people” took place.
* 98,404 people were tried for “thought-crime”.
* Fifty people were executed “at the end of political trials”.
* Files were opened on 1,683,000 people.
* 348,000 people were prevented from acquiring passports.
* 15,509 people were removed from their university posts.
* 18,000 public servants, 2,000 judges and prosecutors, 4,000 police officers, 2,000 army officers and 5,000 teachers were forced to resign.

The Ramifications of the 12 September 1980 coup d’état