Jîna Mahsa Amini was Kurdish, she was a woman and like most Kurds, was brought up in political environments in a politically aware family. Being a Kurd, a woman, and politically conscious is like waving a red cloth in front of the eyes of the clergy in Iran, and for that matter also in Turkey. Like other women, regardless of religious or ethnic background, she was forced to follow a strict dress code that included the hijab. Jîna did this – with reluctance. The only thing the Islamic morality police could come up with to justify kidnapping Jîna Amini in the open, with subsequent beatings and torture, was that she did not follow the rules for the correct use of the hijab. She died in hospital a few days later from the injuries inflicted on her by fanatical men who claim justice through absurd religious injunctions.

Most people have heard and seen what happened in the aftermath of the Jîna Amini murder as the news about her suffering and death have spread like wildfire in international media. The fire flared up in many countries and led to a mobilisation the likes of which the world has not seen for a long time. Is it because the murder of Jîna is equated with the violence and murder of all women? Or does it happen because she was a Kurdish woman? I think the answer to the questions is that it is both.

What surprises Kurds and people who are familiar with the Kurdish political landscape, those who support the Kurdish liberation movement and not least the Kurdish women’s movement, is that this is the first time that national and ethnic minorities like Baluch, Arabs, Persians, Azeris, and others have taken to the streets in support of the Kurds, Kurdish women, and women in general. The motto “Jin, Jîyan, Azadî” (“Woman, Life, Freedom”) has long been used by Kurdish female fighters (YPJ) in Rojava. The protests in Iran, that have spread globally, have developed into an issue way beyond the question of the hijab, which has never been an issue for the Kurds in general, though it remains a fundamental issue for the regime. 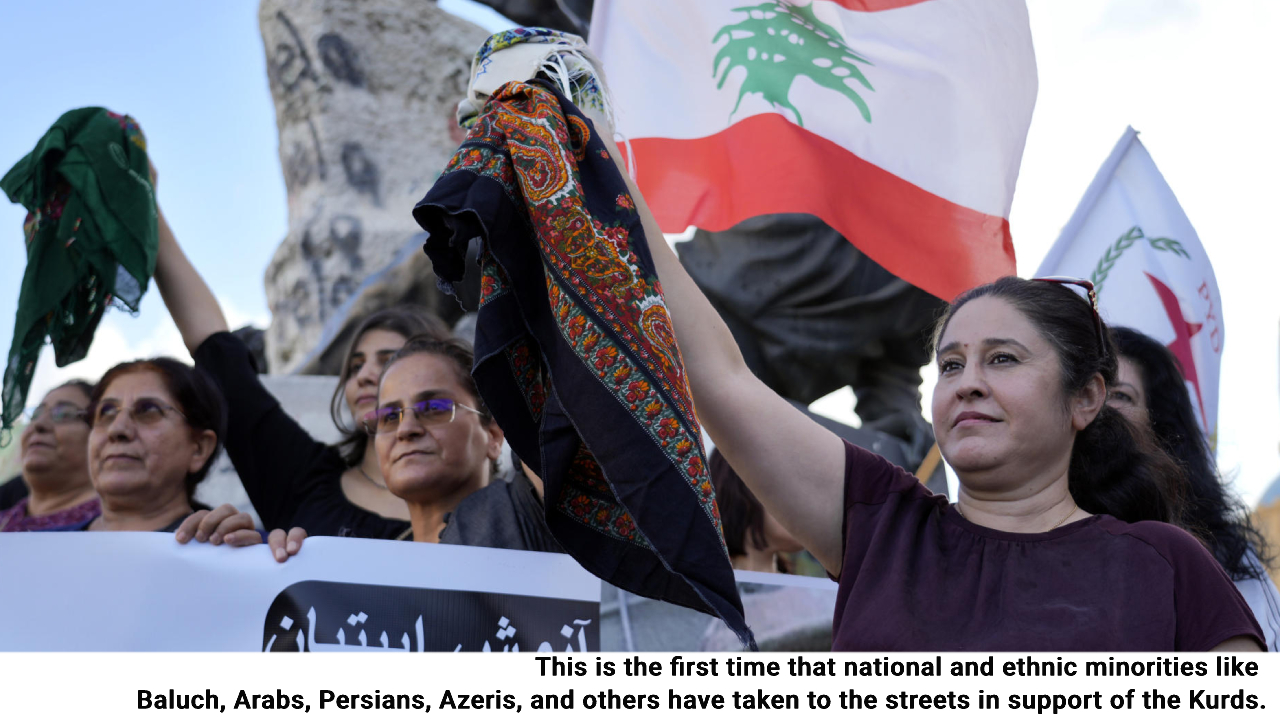 The global collective uprising following the Jîna Amini-case carries within it the seeds of something new, a solidarity that extends beyond self-interest, in which women across different backgrounds, ethnicities and borders are empowered to make a common cause to improve women’s situation. Despite the danger to their own lives and health, this collective action could change the political system in the long term. Collective mobilisation is nevertheless nothing new in Kurdish history. Particularly during the last 40 years after the PKK appeared on the political scene, Kurds have increasingly shown their disagreement by collectively taking to the streets – also in diaspora. This, on the one hand, has cost them dearly in the form of persecution, imprisonment, torture, and murder. On the other hand, the reward has been a significantly stronger Kurdish people with an identity and critical consciousness that may even lack parallels in world history. The PKK which was founded as a political party in 1978, and its leader Abdullah Öcalan has credit for the Kurds being lifted out of silence and being given a voice.

Kurdish uprisings and protests from the 1990’s and onwards are often termed ‘Serhildan’. The first of a series of actions against police officers and state institutions occurred in 1990 in North-Kurdistan in Nusaybin near the Syrian border as a reaction to the killing of thirteen PKK guerrillas. The uprising spread to the entire region. No one could have anticipated the outcome of these actions, and how they would enforce, and raise, the Kurdish struggle to a new level. Serhildan have added an important dimension to the struggle, namely the force that lies in collective mobilisation, collective identity, and collective memory. Even the PKK was surprised at the strength of these first uprisings, and they showed people’s willingness to mobilise for a cause they believed in and how it created a strong sense of community among the participants. 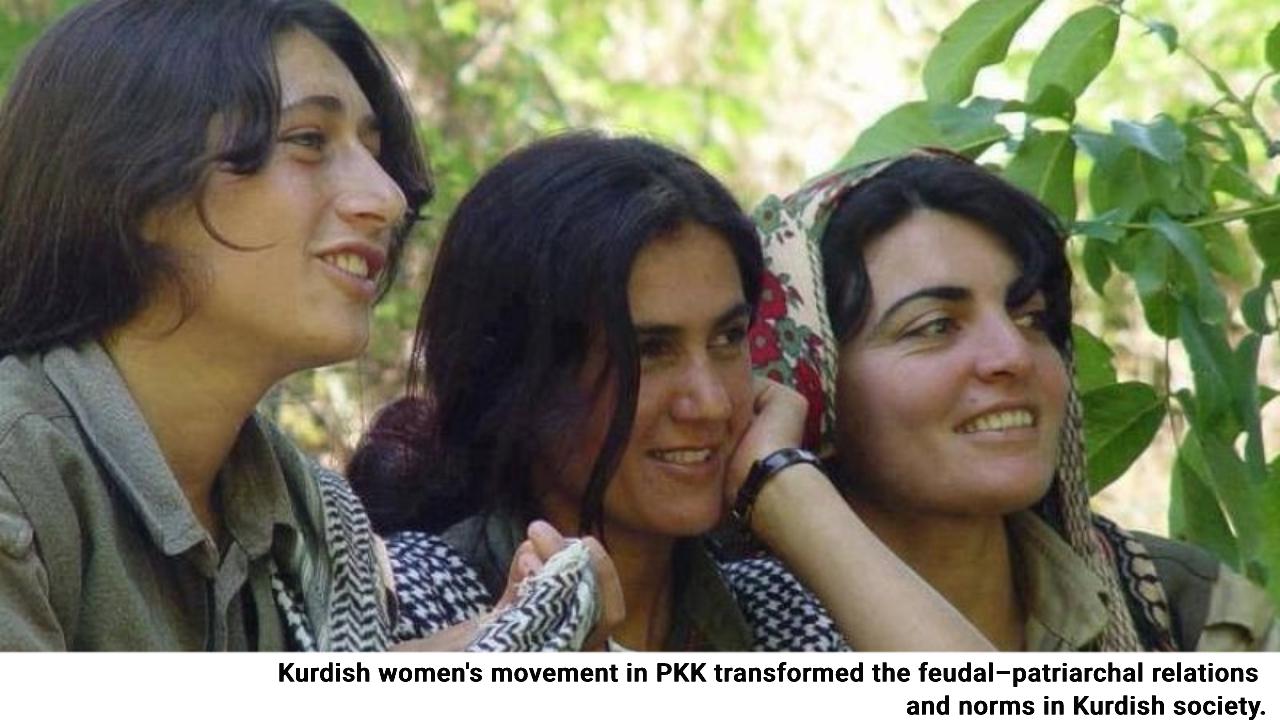 One could argue that individual incidents and people sacrificing their lives for a cause they believe in underlie and motivates collective mobilisation and uprising, such as in this Jîna Amini case. What happened to her has fuelled the emotional process by giving energy to the mass but gives strength and courage also to the individual participant. Even as people gather to express their sorrow and grief for Jîna Amini, the emotional atmosphere also gives space for the ‘historic pain’ of the people. So, what we have experienced in these last few days is that collective mobilisation around an incident or a common cause often increases the participants’ critical awareness and enables them to perceive and act upon the actual social and political situation in a different way. The Jîna Amini uprising are both a collective reaction to a horrible incident where a woman was murdered exactly because she was a woman and Kurdish. On the other hand, the uprising is a reaction to the historical pain inflicted on women in a male-chauvinistic priesthood or male-dominated environments.

There are of course many reasons why people take to the streets showing collective protest. One aspect is that acting together with thousands of others with the same goal, entails an element of excitement, touching on the emotional aspects of specific life -and political- situations. Emotional reactions caused by horrible experiences are stirred when people get the chance to express them – individually or collectively. When people gather around shared beliefs or actions filled with emotions, the atmosphere often reaches a high energy level, creating a sense of emotional togetherness. In these emotional collective moments, political meaning is created, and collective memory established (Halbwachs, 1992).

Collective uprisings like those we are watching at the moment always carry the intention of transforming society. Gramsci, in his prison writings, claimed that collective learning takes place when the participants discover the relationship between collective action, political meaning, and change, and can transfer these experiences to the next collective event. In this way, collective action improves and develops with time and experience.

Jîna Amini is dead and buried. A young life has ended as so many other Kurdish lives. We will forever remember her sacrifice as a woman, as a Kurd. She lit a spark that turned into a world-wide fire torch. It is a hope that the torch never burns out but is held high and continues to burn in solidarity with oppressed and gagged women around the world.

To conclude with Peace in Kurdistan (PiK) solidarity message “The people will prevail” (27.09.22):

Women are at the forefront of this historic struggle that is rapidly developing into an unstoppable force that will see the sweeping away of all the hated theocracies, along with their archaic rules and antediluvian codes. As inevitably as day follows night, the people will prevail.

Dear Jîna, may your light burn and call us who are still here to action.