A review of ‘Rising among ruins, Dancing amid bullets’ by documentary photographer, Maryam Ashrafi

In an age when we have become used to films being colourised to bring us closer to the past, Maryam Ashrafi reminds us of the power of the traditional black and white photograph. ‘Rising among ruins, Dancing amid bullets’ is a testament to Kurdish resistance delivered through images that manage to be both symbolic and intensely human.

With the prevalence of smartphones, the world is awash with pictures of every event. Still, books such as this remind us that the ability to frame a shot and catch the decisive moment, use light and focus to enhance a scene, and let faces unselfconsciously tell their own story remains a rare and essential skill. This book is striking, but it also presents a vital historical record of the Kurdish struggle in Iraq and Syria between 2012 and 2018. 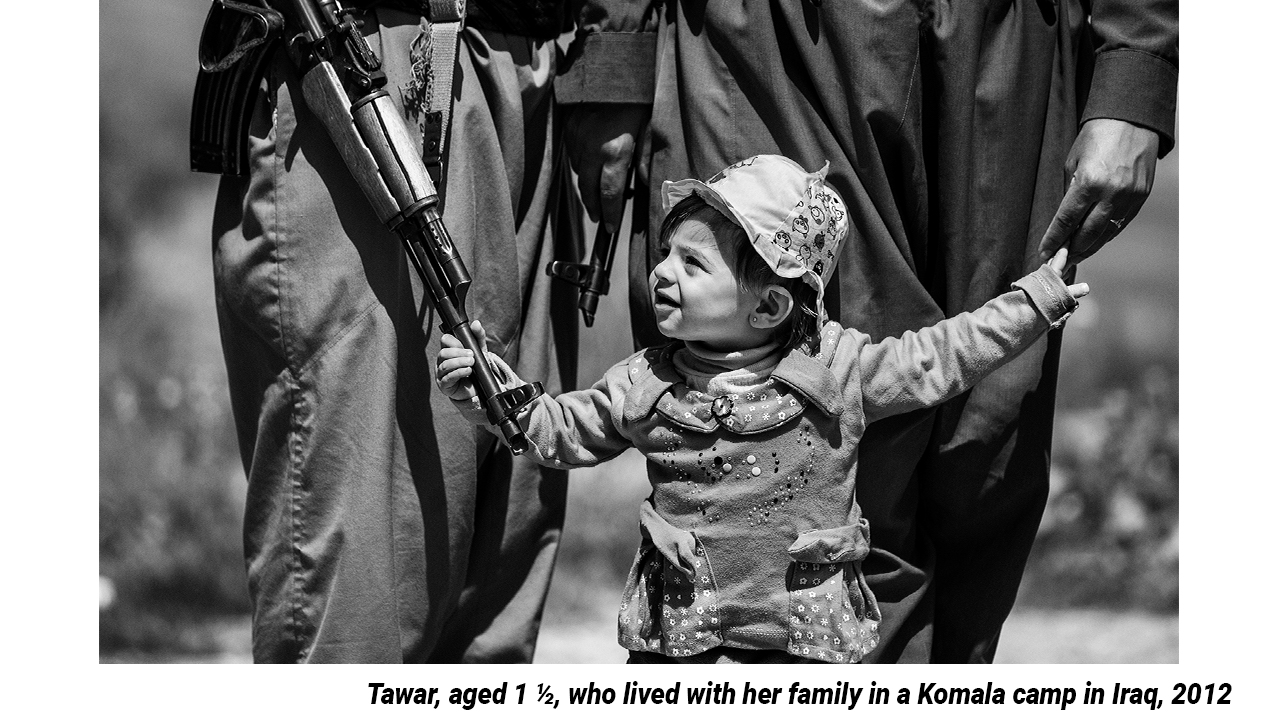 Black and white photographs can strip away the chatter – or as Maulène Sauloy puts it in one of her contributions to the book, black and white “magnifies the essential… Freed from the distraction of color….” Colourised photographs aim to bring the past into the present and seem more tangible. Black and white pictures of current events also link the present with the past, which can often seem more vital and less trivial due to our distance from it. These images are simultaneously distant and intimate, compelling the viewer to engage. 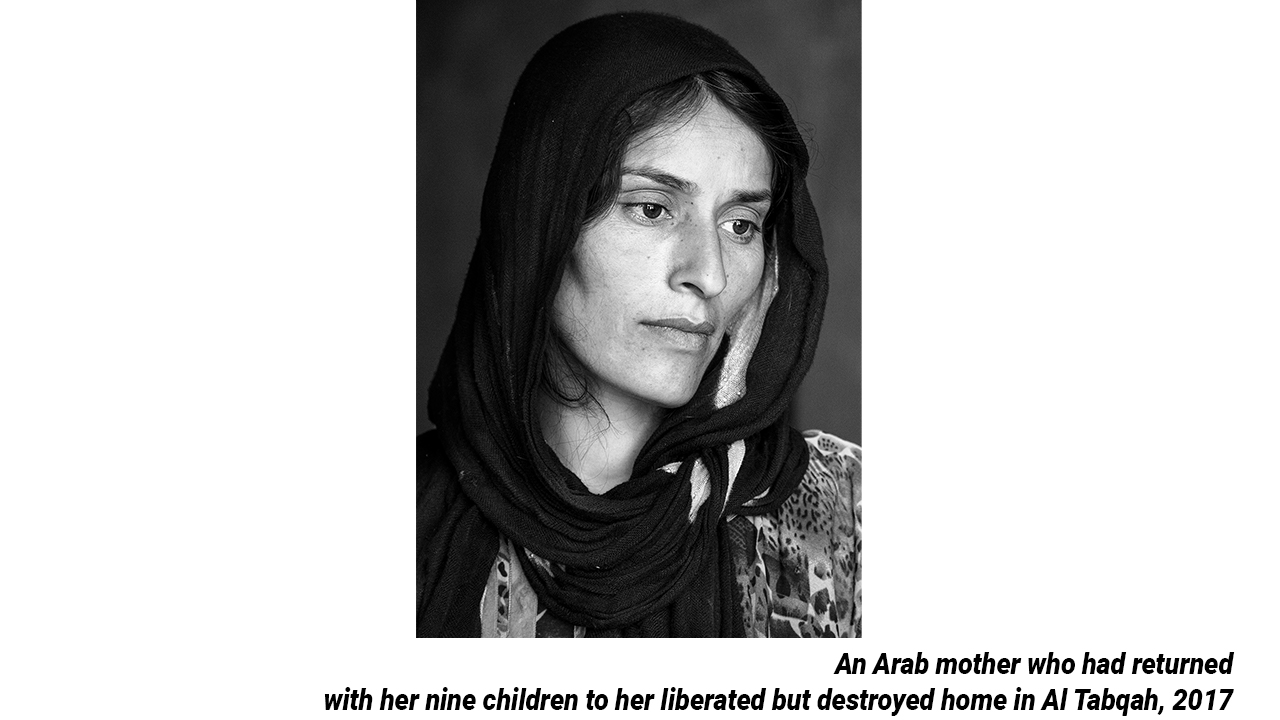 For Ashrafi, the book represents a personal and political journey. The child of parents actively engaged in left-wing politics, she left her native Iran as a teenager for life as a refugee in England, and more recently, in France. And although her family is not Kurdish, the Iranian Kurds gave her a sense of hope. The physical journey recorded here began in 2012 when Ashrafi returned to the Middle East with her camera to contact Kurds from Iran who had established guerrilla bases in the mountains of Iraqi Kurdistan. The first images depict the lives of these rarely reported groups – the communists of Komala, the Kurdish nationalists of the Kurdistan Democratic Party of Iran, and the followers of Abdullah Öcalan’s philosophy in the Party of the Free Life of Kurdistan (PJAK). 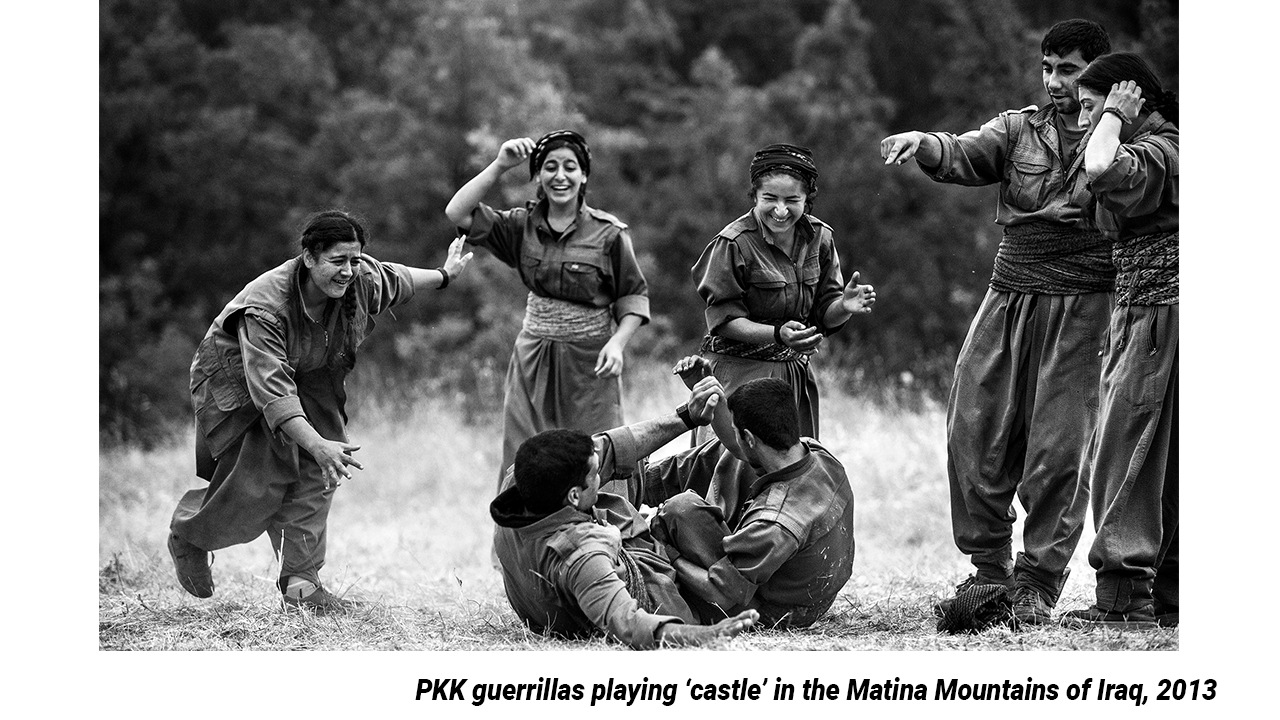 Later, Ashrafi was able to spend some days at a PKK camp in the Qandil mountains and observe the active role of the PKK women and the overriding influence of Öcalan’s ideas.

Back in Paris, demonstrations for Kobani persuaded her of the need to document the consequences of the war in northern Syria: the combination of destruction and rebuilding, with its hope for change, in a place where the ‘concrete reality’ of these ideas was being constructed, and women were taking a central part.

Ashrafi arrived in Syria in 2015, shortly after the battle of Kobani turned the tide against ISIS, and she had to be smuggled over the border. This became the first of several visits, and when I met her as a fellow member of a women’s delegation to northern Syria three years later, she remarked that that was the first time she had crossed the border legally. Ashrafi explains that Turkey’s antagonism towards the Autonomous Administration of North and East Syria and, to a lesser extent, by the Kurdistan Regional Government in Iraq has doubly impacted journalistic coverage of this war through the closing of borders and subsequent restriction of access. 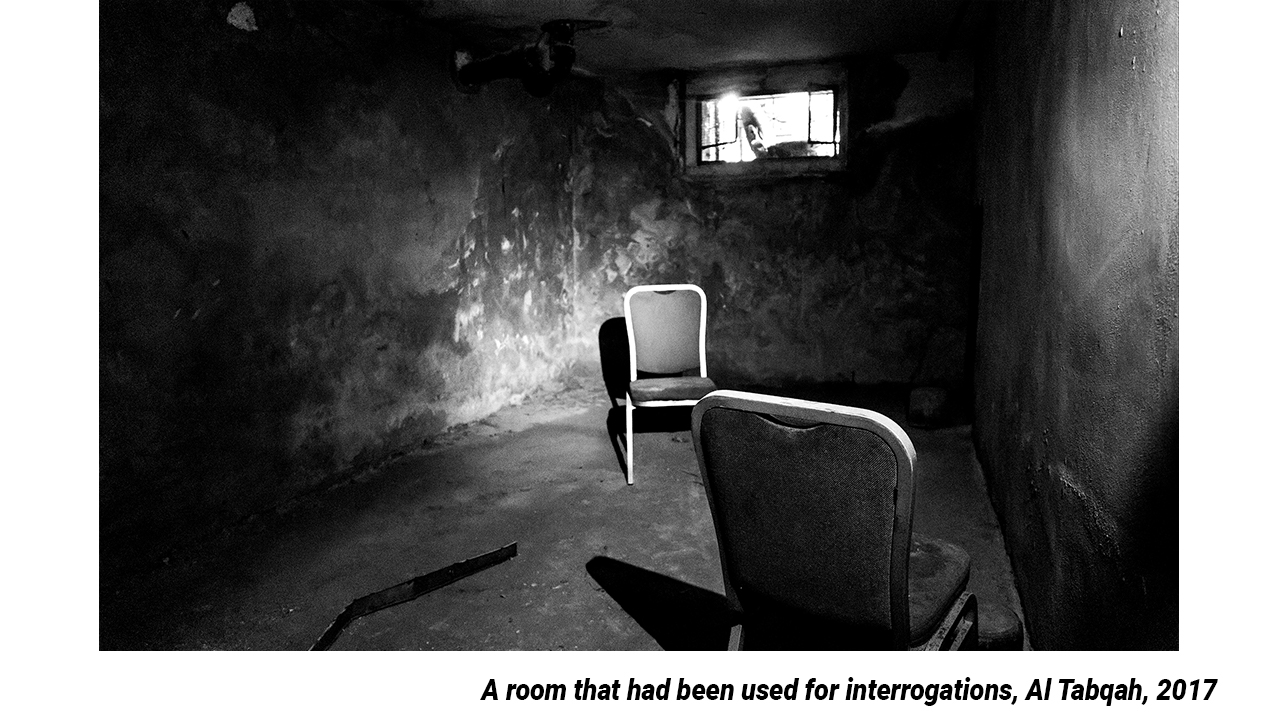 Ashrafi photographed in liberated Kobani and in the Raqqa Governate, where the war was still ongoing. Her pictures do not attempt to show the battle but provide a record of the fighters’ lives behind the lines and – in her words – ‘ordinary people caught up in the cogs of war’. She documents not just the destruction, with its reminders of recent occupation by ISIS, but also ‘the specific ways in which the [Kurdish] movement came to inhabit these reconquered ruins’ – ’a society in the process of transformation’.

Other sections take us to the Yazidi homeland of Sinjar (Şengal), refugee camps with children wise beyond their years, Peshmerga searching for ISIS members in Kirkuk, and some of the Kurdish demonstrations that have filled the streets of Paris.

For the most part, war is ‘out of shot’ but ‘omnipresent’; however, Ashrafi also includes the dreadful moment when an accompanying soldier lost his life to a boobytrap bomb left behind by ISIS.

This kind of photography requires not only bravery but also sensitivity towards people undergoing life-shattering experiences. Rather than any personal risk, it is the latter that has worried Ashrafi, who is very concerned about being true to her subjects. She explains, ‘I had to try to become a familiar face, try as much as possible to become part of the world of these women.’ She is petite and almost hidden by her camera, but what really makes her unobtrusive is an evident empathy with the people she is photographing. She explained to me that because this was a long-term project, the women she was with would become used to her and forget about her camera, but that they also welcomed the fact that she was there to let the world know about their situation. When photographing funerals, she would find her professionalism coming into conflict with the grief she shared with the community she had become part of. Still, she would remind herself that she was there for a purpose. 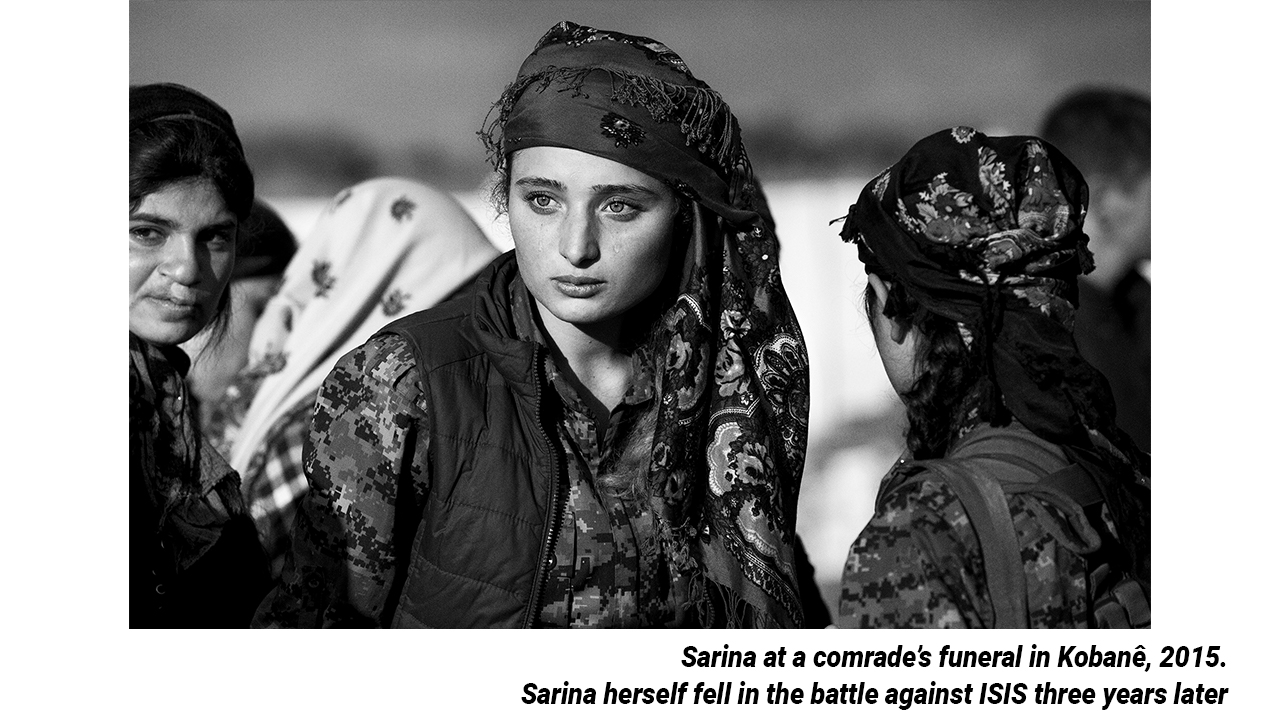 The book begins with a lengthy interview with Ashrafi, quoted above. The photographs have extended descriptive captions, and the book also includes essays by various writers. These work best when they provide a background to the images, as with Kamran Matin’s helpful outline of the Kurdish resistance organisations in Iran. Ashrafi wanted to bring in different perspectives, but I am not convinced that all the discussions and other personal memories, however interesting they may be in themselves, add much to the photographs’ message. Allan Kaval’s writings introduce a more negative note that sometimes seems at odds with the pictures’ story. It would be wrong and unhelpful to pretend that the Kurdish freedom movement is without problems, but problems need nuanced and engaged analysis rather than a juxtaposed narrative. I was left wishing that we could have heard more of the essential background from Ashrafi herself.

But, of course, it is the pictures that really tell the story.

Ashrafi is now working on a different project that looks at the impact of land mines. Still, she emphasises that the project represented by this book, like the history it documents, can’t be considered finished. She laments how quickly the media moves on and how difficult it is to raise public awareness, especially the understanding needed to bring about political change. Of course, she wishes she could do more, but this book makes a decisive contribution.

You can see more images on Maryam Ashrafi’s website, where you can also order the book in English or French:

All images are copyrighted to Maryam Ashrafi.