Thousands of women took to the streets at the weekend in Istanbul, Ankara and other centres across Turkey in anticipation of 8 March, International Women’s Day. They applauded, whistled, sang, and chanted battle-cries against patriarchy and all forms of discrimination against women. Their banners read: “Step up the fight against poverty, violence and exploitation.”

These weekend rallies were only the prelude to the “annual feminist night march”for 8th March, the big event, that after two decades of vigorous battles has eventually become an “annual nightmare” for the tyranny, as it attracts tens of thousands of women to join in one of the most vibrant, energizing, and creative rallies across the globe. And the governor of Istanbul has already banned the “night march”, as it has since 2017. 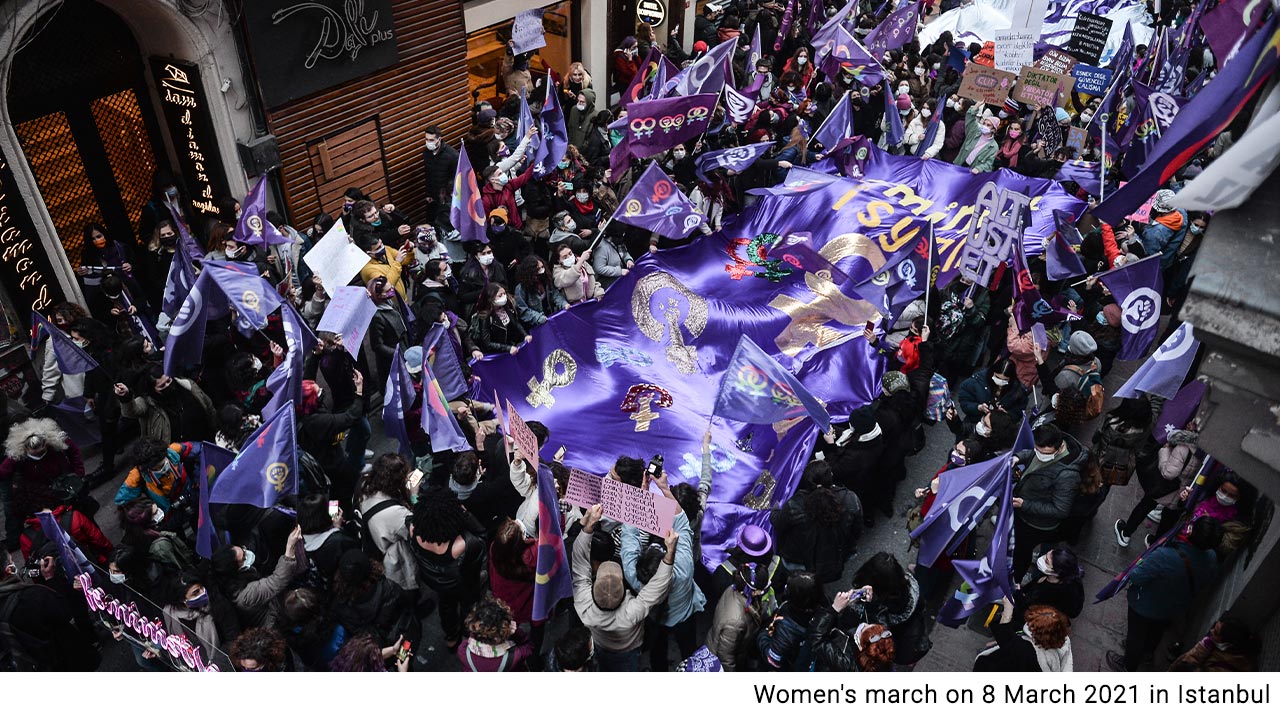 Despite the ban, this year the march might draw an even greater number of women into its ranks, particularly in Istanbul as it is going to be the first 8th March celebration following Turkey’s withdrawal from the Istanbul Convention under a controversial presidential decree issued by Erdogan on 20 March 2021.

“The Istanbul Convention is a ground-breaking international treaty specifically designed to tackle systematic and widespread violence against women and girls” as described by the International Federation of Jurists (IFJ).

“The Istanbul Convention sets out comprehensive standards for the prevention of violence against women, protection and support for survivors, and prosecution of perpetrators, as well as establishing obligations for State parties to provide minimum essential support services to victims, such as shelters and medical assistance. The Convention requires State parties to respect, protect and fulfill women and girls’ human rights, including refugee and migrant women. Importantly, the Istanbul Convention contains provisions to hold the authorities accountable for meeting their treaty obligations.”

Erdoğan had justified his decision for withdrawal with the pretext that the Istanbul Convention was being exploited for “normalizing homosexuality”, and was “incompatible with Turkey’s social and family values”, albeit it was legislated under his AKP single party majority in 2011 and remained in force for a full decade throughout successive Erdoğan cabinets -ironically,with particular support from the AKP’s own women branches and pro-AKP GNGOs . Yet, Erdoğan, could not but give way to the misogyny of the zealot Islamist factions and orders whose political support he desperately needs to stick to power vis-à-vis constant decline of his popular support in the downward spiral of political and economic crisis.

The Council of State of Turkey had turned down an appeal by the opposition IYI Party, to annul Erdoğan’s decree, immediately after its issuing. However, in two recent cases in January and March 2022, prosecutors Elmas Mucukgil and Aytaç Kurt – challenging Erdoğan’s self-presumed authority for withdrawing from an international convention approved by parliament- have restated fresh calls for its annulment for infringing the law. Obviously, the ongoing stark legal controversy is an immediate reflection of the massive women’s reaction against elimination of a major legal shield for women’s protection from male domination and violence, just as the successive legal opinions challenging its annulment would inevitably reinforce the ongoing campaign for an urgent repeal of Erdoğan’s decree, a major column of women’s resistance this year.

Indeed, this conflict extends far beyond the sphere of legality and provides insight to the basic issues as well as the scope and impact of the women’s liberation movement in Turkey and Kurdistan. The women’s movement in the last four decades have gained massive proportions and political import in relation to two major changes: rapid urbanization and relative growth in women’s literacy and employment in general and the massive politicization of Kurdish women.

However, the Kurdish urbanization, under the army’s counter insurgency strategies structured for denying rural support to the Kurdish guerrilla PKK, has taken an unusual turn: during the “scorched earth” campaigns in 1990s “dirty war”, millions of Kurdish villagers have been forced to flee Kurdistan and ended up in the outskirts and suburbs of the Mediterranean centres of Mersin, Adana and Antalya and of İstanbul, İzmir and Ankara to the farther west instead of resettling in Kurdistan provinces -thus dumping the inflammable material of political dissent from urban to rural areas.

On the other hand, the literacy rate among women from 50 percent in 1980 has reached to 94 percent in 2019. Although these figures, due to regional inequalities as well as to ethnic and national discrimination should be considered relatively lower for the Kurdish provinces, they still indicate a visible rise in the last four decades. The ratio of schooling among Kurdish girls too has also grown and channels are opened for increased social mobilization and contacts as well as for female employment. 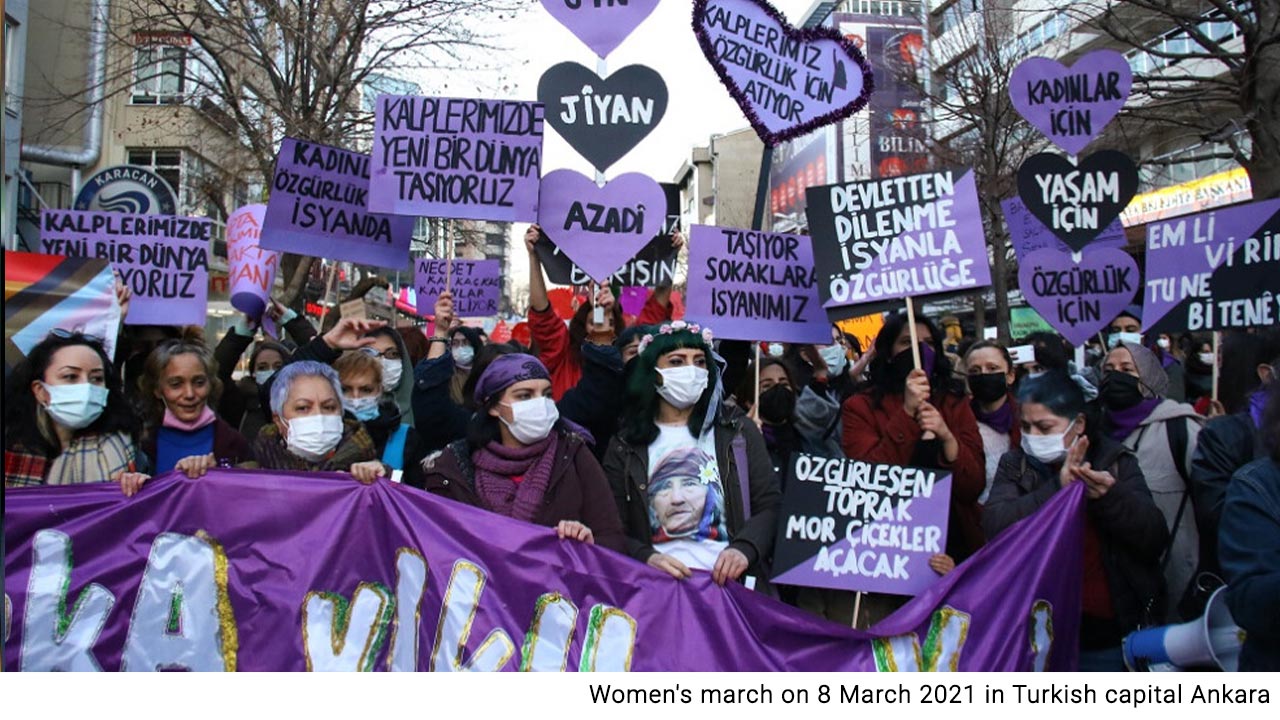 Nevertheless, these objective changes as such, could not have necessarily lead to the present level of feminist activity if the political dynamics were not in the working. Alongside the relatively limited development of the material basis -access to participation of women in work, in education, in sports, arts and politics- the “modern” barriers for women’s empowerment too was intertwined with obsolete patriarchal patterns, calling feminist action to the fore in order to transform the basic social relationships wherever women existed -at home, in the workplace, at school, in the media etc. If the three decades of continuous fighting by the feminist vanguard against the main pillars of male domination within both the state and the civil society had not taken place, the magnificent “feminist night marches” and the liberated mass behind it would have never existed.

However, if there had not been the Kurdish liberation movement’s particular emphasis on women’s liberation -a specific understanding of women’s activism that evolves from the heritage of the free communal Kurdish women and extends to connect with the urban women’s liberation movement and a philosophical and political trend grown out of the specific necessities of liberation as well as a rebirth of a nation from its ashes, the women’s movement across the country would never have been able to bring together the rich experiences of women’s struggles against patriarchy and all forms of discrimination from both ends of the women’s front: the Kurdish women’s energy and inspiration with the experiences and imagination of the metropolitan women. The Kurdish women’s battle-cry “Jin, jiyan, azadi” (women, life, freedom) summarizes this long journey in three words and adds its tone to the general fight. 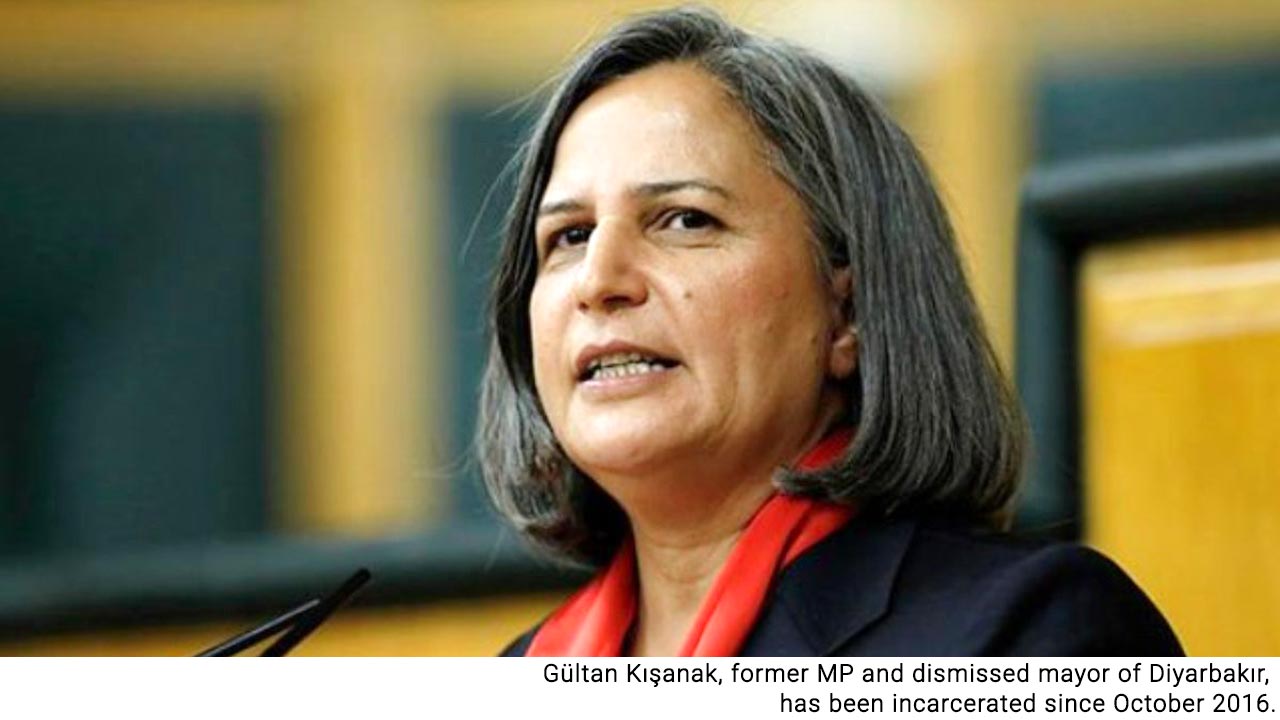 On this occasion I would like to recall two women in particular: Gültan Kışanak of the Democratic Society Party (DTP) and Sebahat Tuncel of the Peoples’ Democratic Party (HDP) who have made invaluable contributions to build bridges between the Kurdish women’s liberation and the political struggles and social movements in general, integrating the Kurdish women’s liberation struggle as an organic component in the general human liberation – and for that they have been paying a very heavy price in prison. 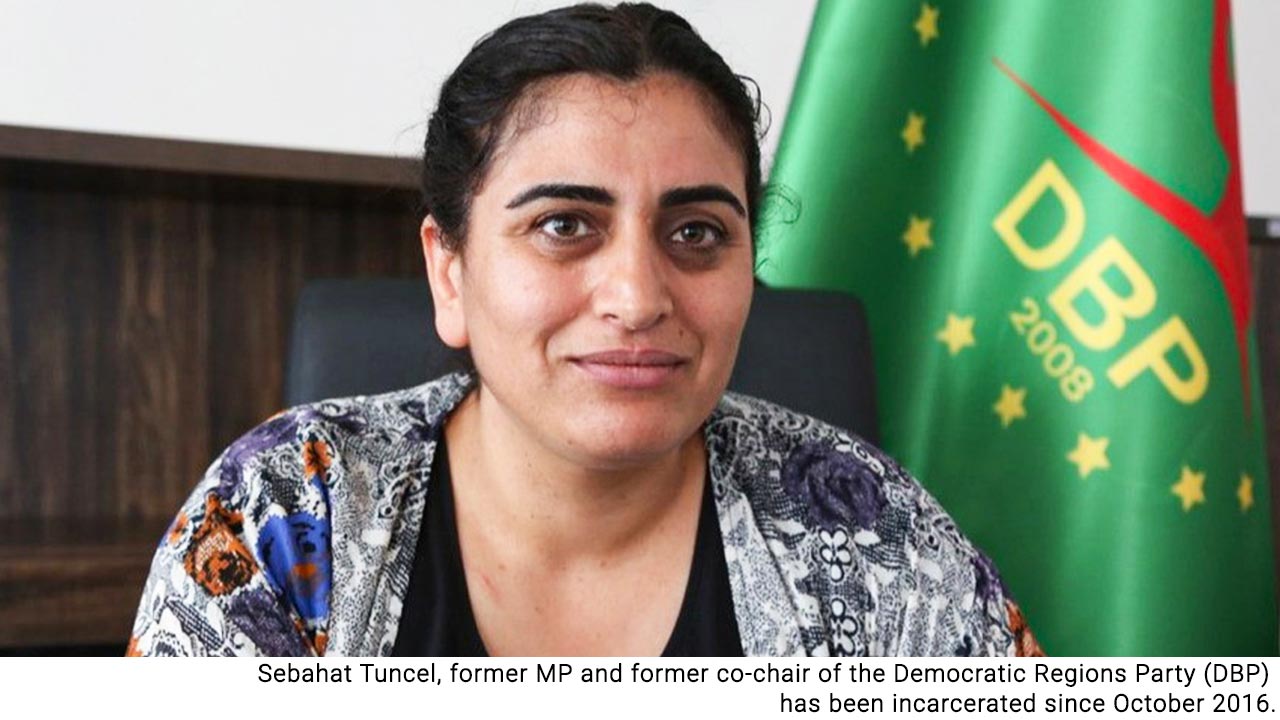 The disproportionality of the tyrants’ cruelty in response to the two women’s peaceful line of action might amaze an onlooker, but a deeper look would provide the clue: They have played the part of the vanguard in bringing about viable channels to help raise the women’s movement to the forefront of human liberation in a society where “humanity”is conceived simply as the negation of Turkishness and male domination. Questioning the raison d’etre of this “allaturca” establishment is the biggest crime in this part of the world.