“It has been exactly 30 years; since he was tortured and killed. Then the state attacked his funeral… 11 more deaths…Today I wanted to write about Vedat Aydın; but it is hard to write… My feelings have never changed; neither when I wrote seven years ago, nor after that…” writes Eren Keskin for Yeni Yaşam.

It’s been exactly 30 years. The babies born on that day have become adults today. The children of Vedat Aydın who was tortured to death by counter-guerrilla forces 30 years ago have been living with the burden of their father’s loss for all these years.

Last night, on the anniversary of his death, I wanted to write a new article for Vedat Aydın. However, I couldn’t write it. That’s why I wanted to share this article from the past, once again.

The 1990s in Kurdistan was a period with “sufferings added to sufferings”. We didn’t even have time to grieve for an incident. Every day a fresh report of suffering was received. When I look back on those years, I recall our loneliness and the solidarity amongst ourselves.

I also recall blind consciences, discriminative approaches even in the field of human rights, and those people who regard the right to live only as an exclusive right for themselves…

As a matter of fact, maybe it was the social apathy in the face of sufferings of the 90s, that state of not seeing and hearing, which strengthened the solidarity between the Kurds and their small group of friends.

I remember how we were trying not to give up to one of the most basic human emotions, fear. We were so lonely and so abandoned, just clinging to one another and strolling our way. And in those days, exactly 30 years ago to be precise, all the defenders of human rights suffered a great agony; an agony not to be forgotten till the end of our lives.

Vedat Aydın, one of the most important representatives of the human rights movement, was snatched away from us… Pitilessly, brutally…

Vedat was a special and beautiful person: someone never to be forgotten. Even in the worst days, he inspired strength to the people around him. He made us all laugh with his jokes. 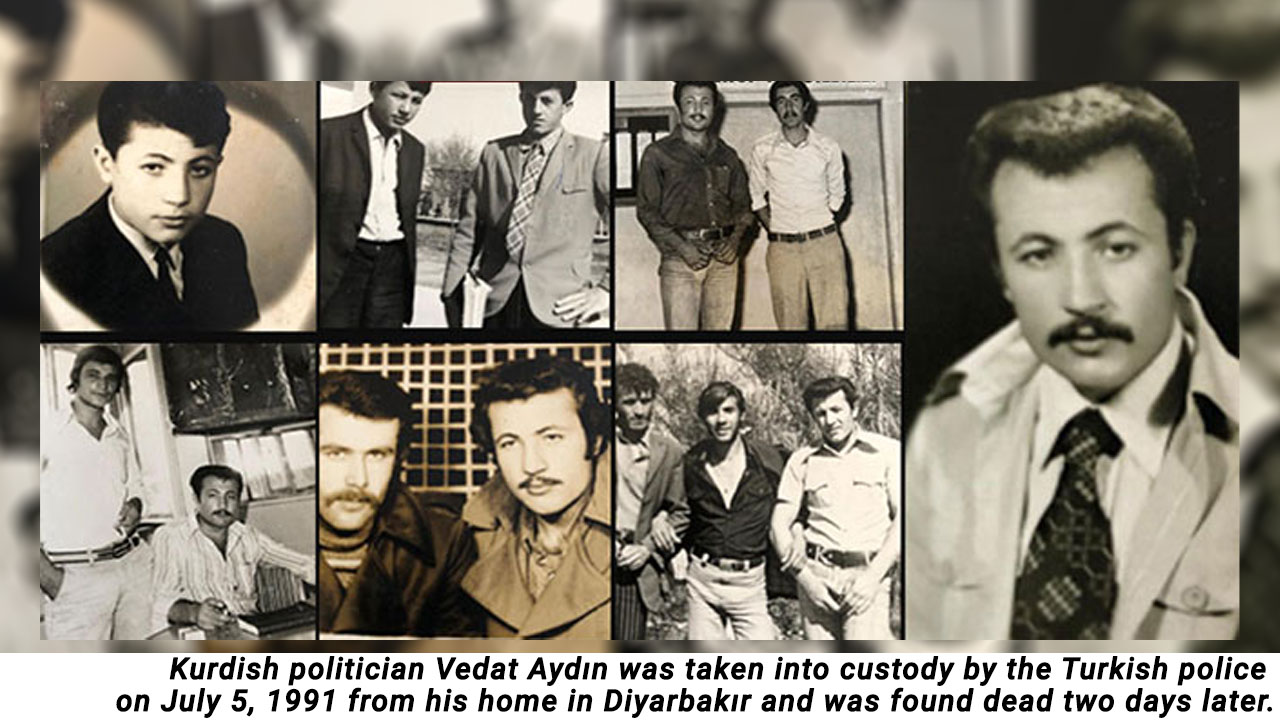 In 1990, at the congress of the Human Rights Association, during a time when no one dared to speak Kurdish, he climbed on the stage and spoke in Kurdish. He spoke on Kurdistan, the guerrilla and the war. That speech he made in Kurdish led to a great controversy within the the human rights struggle. Some tended to see him as a kind of criminal, and criticised him. His attitude gave us, the majority in the struggle, great strength.

Vedat Aydın paid the price of having spoken in Kurdish by getting arrested. But he did not yield and continued to speak in Kurdish at the court hearings as well. His attitude actually led to a change in a law at that time. I think the decision was taken for Vedat Aydın’s murder on the same day he spoke in Kurdish at the congress.

The state’s mentality of crushing any kind of rebellion with blood, could not tolerate the rebellion of Vedat Aydın either.

They killed Vedat Aydın brutally. But even this wasn’t enough; they carried out another massacre in his funeral. None of the Kemalists, believers or white Turks of this land, none of them turned to look and witness this agony.

After the murder of Vedat Aydın, Hüseyin Kocadağ, who was an official in Diyarbakır at the time, was openly threatening all of us, and trying to make everyone accept that the killing was carried out by PKK. We all personally experienced this. And that Hüseyin Kocadağ died in a car accident in Susurluk in 1996.* He died along with the racist trigger man of the deep state.

Vedat Aydın and thousands of people like him were brutally murdered, and made to disappear in custody. However, the murderers unfortunately continue to live. And the rulers of the state will always have dirt on themselves as long as they do not give up these murderers.

* Editor’s note: Hüseyin Kocadağ was the high-ranking police official who died in the 1996 Susurluk incident along with Abdullah Çatlı, a fascist criminal used in covert operations of the state. The incident led to the revelation of a secret counter-guerilla organization, JİTEM (Gendarmerie Intelligence Organization), and illegal activities of state officials, primarily in Kurdistan.