Many Syrian refugee women who have fled the crisis and sought refuge in Turkey have to work in the streets of Urfa (Riha), desperately trying to earn a living, often searching inch-by-inch along the streets to collect waste paper, Mesopotamia Agency reports.

Many Syrian women, who have already been exposed to various forms of atrocities and violations during the armed conflict which began in 2011, now have to desperately work to make ends meet in jobs that are insecure and put their health and lives at risk. As they often have to work whilst caring for babies and young children who are with them, they are also subjected to risks. 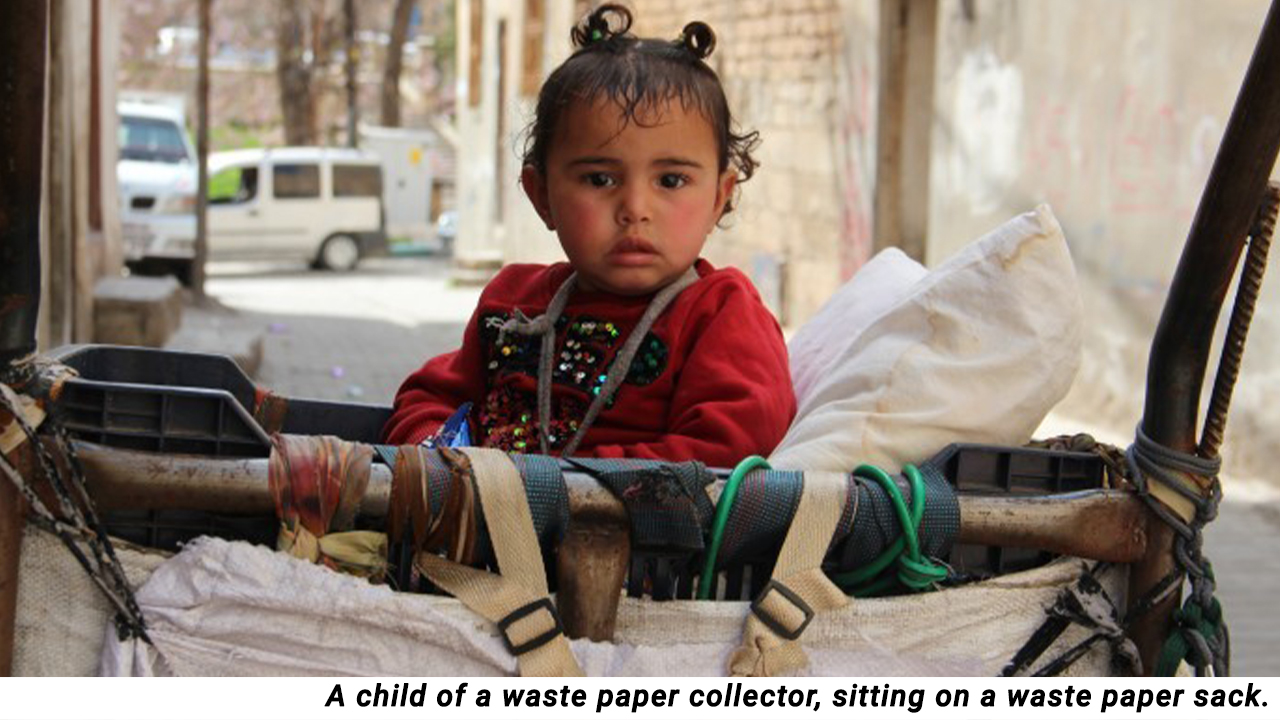 There are approximately 423,000 Syrian refugees in Urfa, a southeastern province in Turkey, according to the official estimates, but the real refugee population in the city is estimated to be far higher. Most of the refugees living in the Kamberiye neighbourhood of Central Haliliye district earn their living by collecting waste. In many refugee households, there are children, women, young and elderly refugees who have to work in the streets everyday from early morning collecting waste paper. 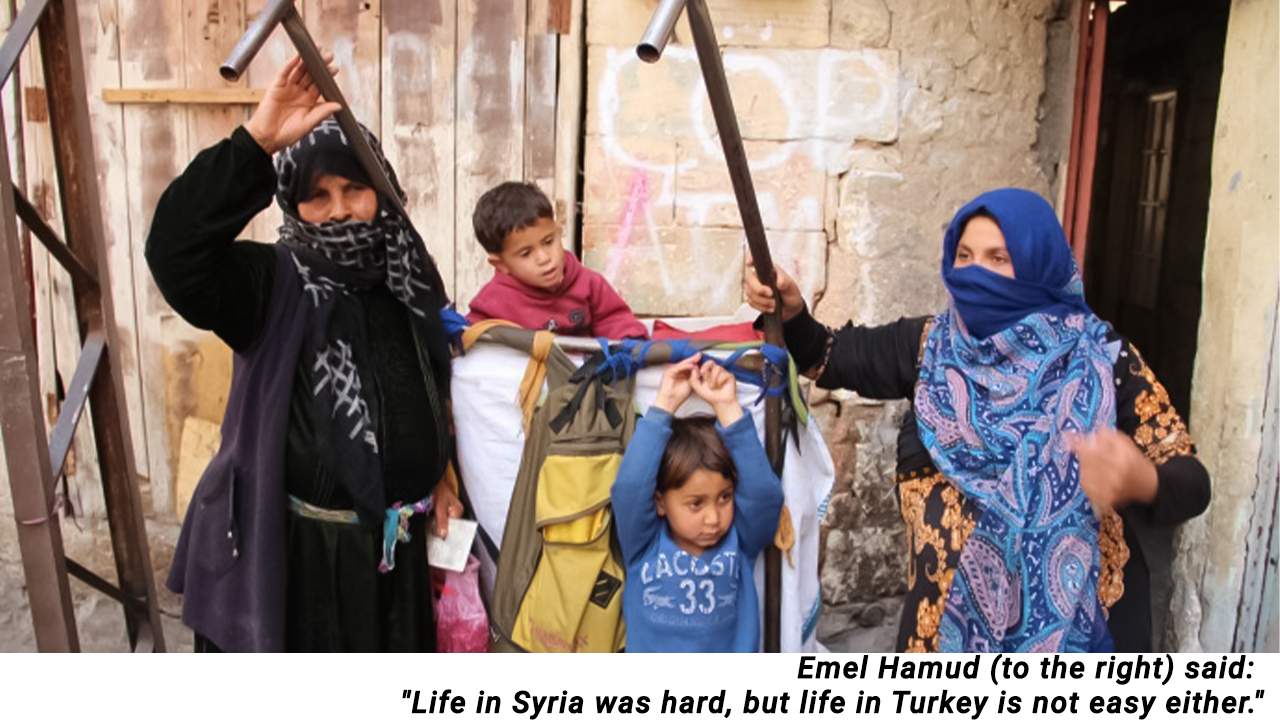 Struggling against intense poverty, discrimination and violence, refugee women – seeking alternative ways to make a living and support family members – have been collecting waste paper in the streets of Urfa. It is a back-breaking job that only brings them a daily income of 25 Turkish lira. 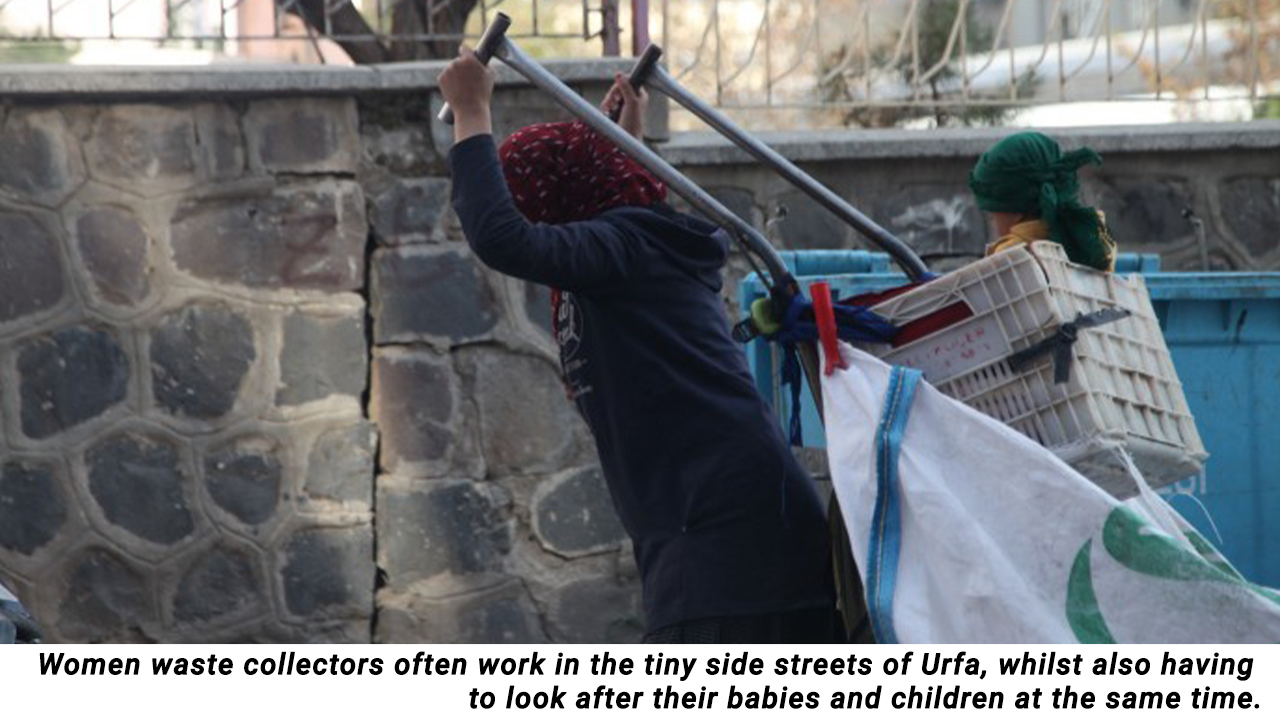 Woman waste collectors often work in the tiny side streets of Urfa, whilst also having to look after their babies and children at the same time. Carrying and transporting huge sacks – sometimes weighing up to 200 kgs – women waste paper collectors are often seen carrying their new born at the same time and tending to children aged up to four as they work.

For every 100 kg of waste paper that they collect, they are paid 15 Turkish Lira. During an average day, most women collectors earn about 25 Turkish Lira. 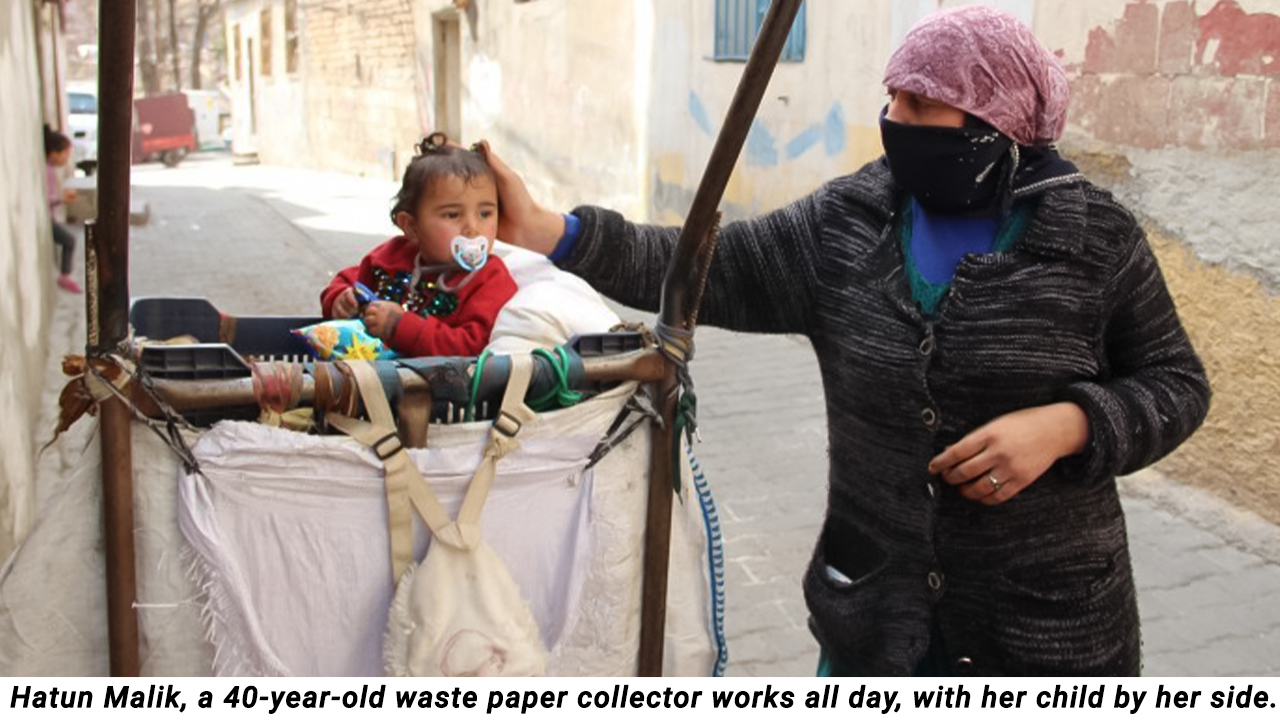 “I have no money to buy baby food for my two year old son. My rent is 600 TL. With other bills, I have to pay 900 TL per month. Nine of us live in the same house and work, yet our total daily income is only around 200 TL”, said Hatun Malik, a 40-year-old waste paper collector. 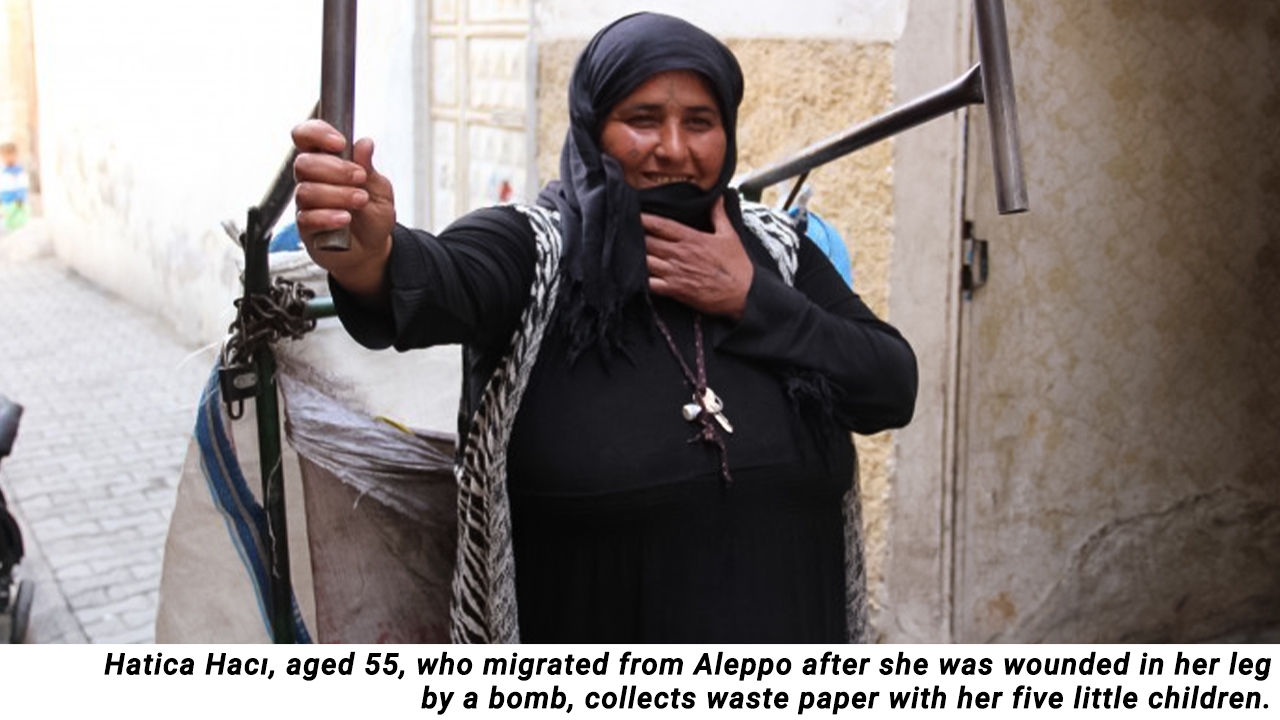 “I can collect around 100 kg of waste paper daily. I can barely earn 15 TL’s per day”, said Hatica Hacı, aged 55, who came from Aleppo to Urfa two years ago after she was wounded in her leg by a bomb that exploded beside her.

Hacı collects waste paper even as she has to look after five little children as she is the sole income earner for her household, after her husband left her after she was permanently disabled after her injury. 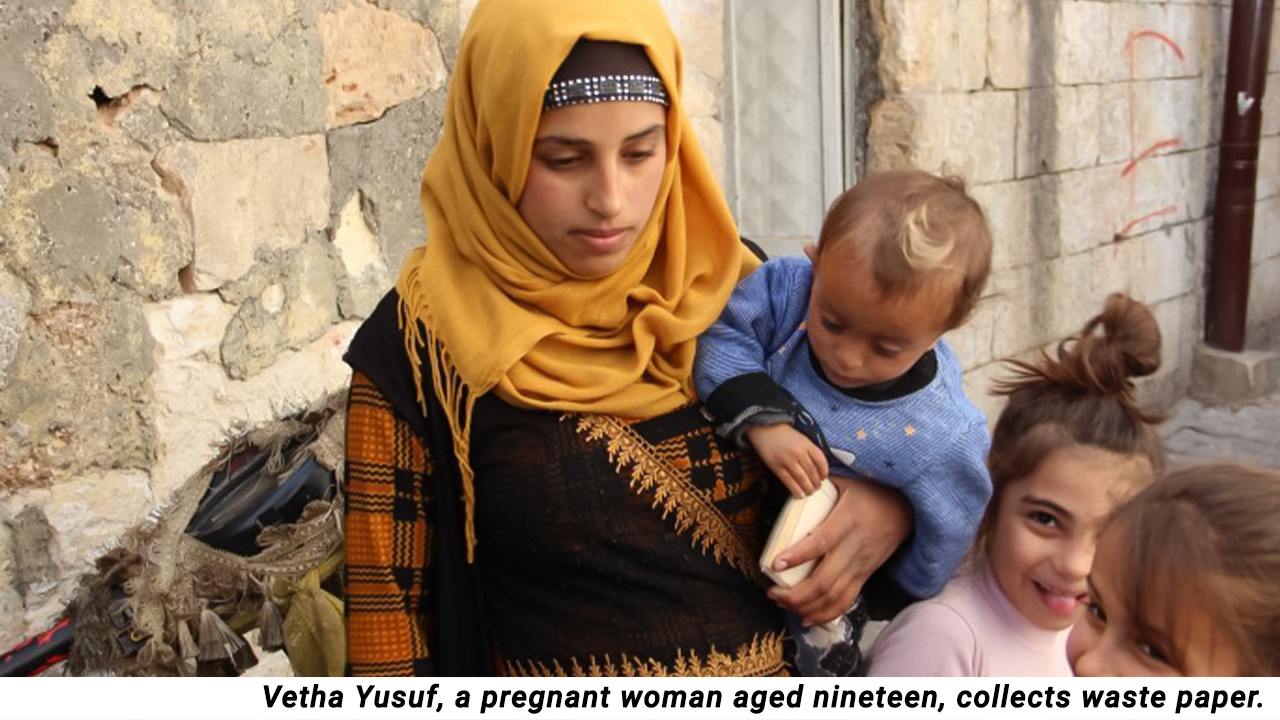 A young pregnant woman carrying a huge bag of waste paper, whilst also tending to her two small children, spoke to Mesopotamia Agency. “I live with 16 people at home”, she said and added: “I am not the only pregnant woman at home who needs to work. I have three other pregnant friends who work under these conditions, like me”, said Vetha Yusuf, aged 19.

Emel Hamud (17) is another pregnant woman who has to work in the streets as a waste paper collector despite expecting a baby. “We came from Aleppo to Urfa five years ago. It is of course hard to carry all that weight, but what am I supposed to do if I’m not working?”, she said. “Life in Syria was hard, but life in Turkey is not easy either”.