The Centre for Socio-Political Field Studies conducted a survey to assess the views, approaches and tendencies of citizens in the mostly Kurdish populated cities of Turkey towards the ‘Kurdish question’, Mesopotamia Agency reports. 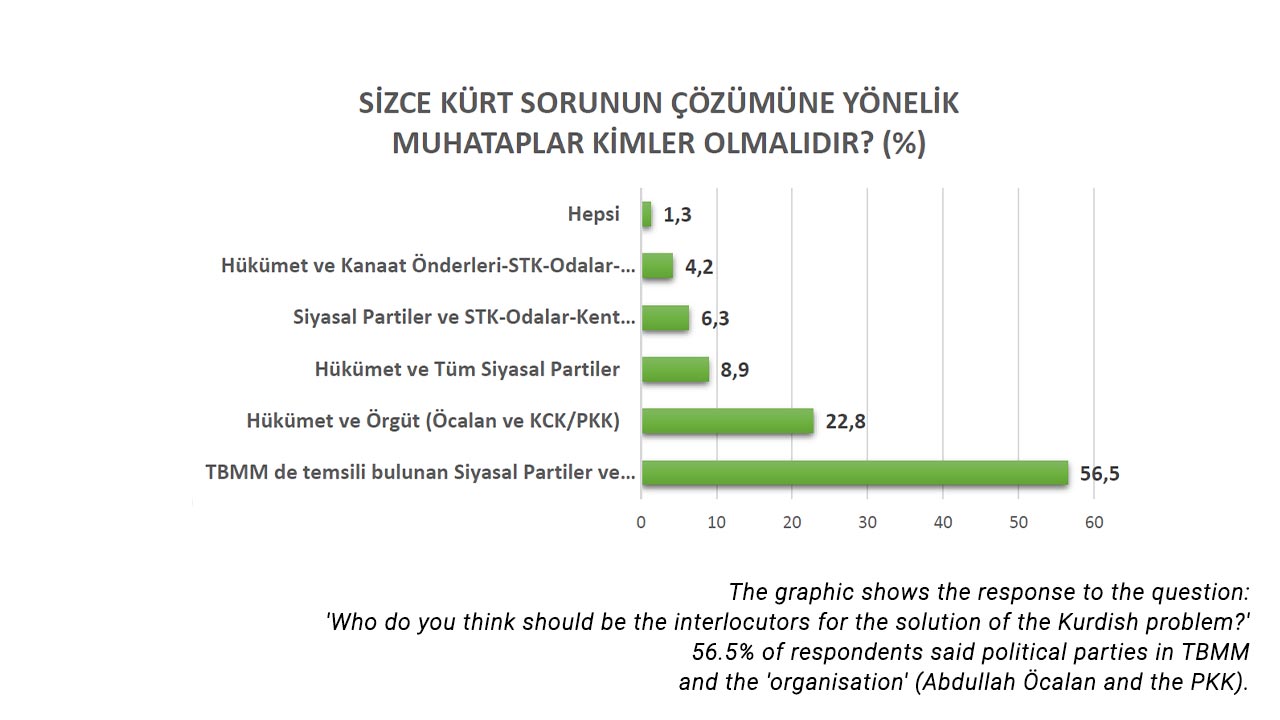 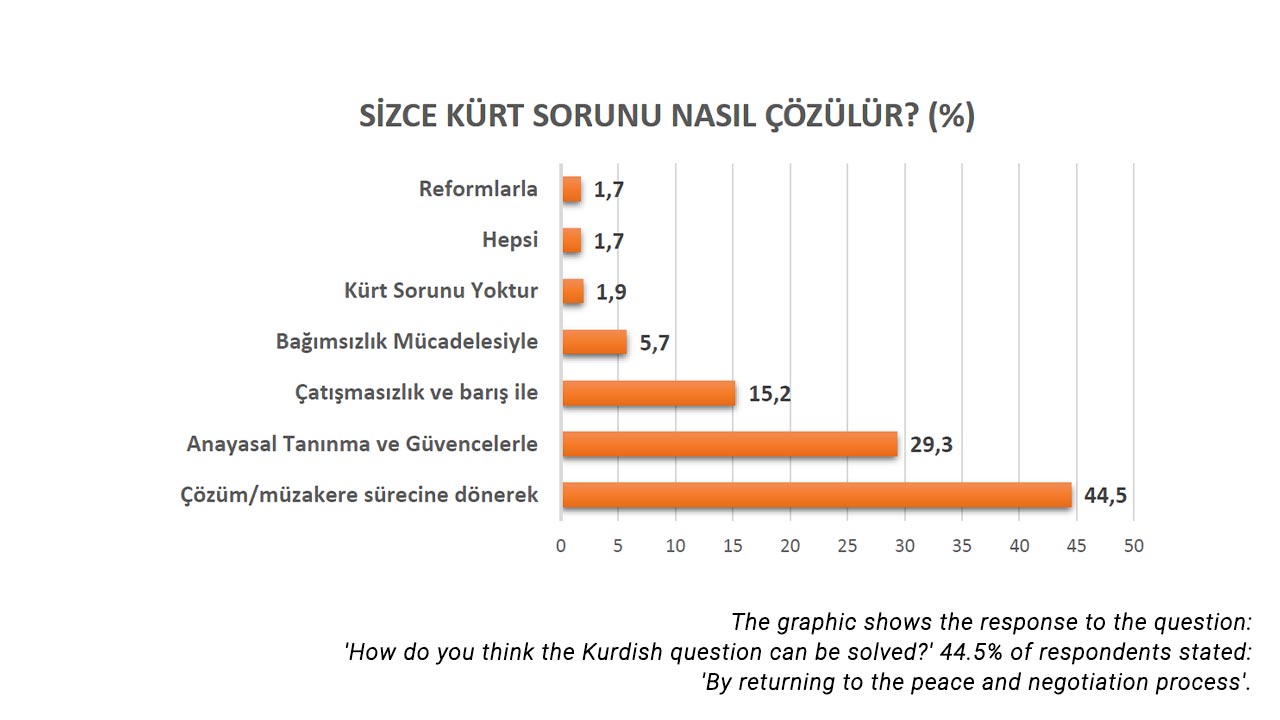 95.4% of the participants of the survey defined themselves as Kurdish when they were asked about their ethnicity.

When the participants were asked the following questions regarding their views concerning the definition of the ‘Kurdish question’, the answers came out as follows:

– In total, 82.3% of respondents did not agree with the suggestion that “there is no Kurdish question”.

– 82.5% of respondents agreed with the definition that: “It is a cultural problem that has arisen due to the non-recognition of the mother tongue and identity rights of Kurds”.

– 86.9% of respondents agreed with the view that: “It is a problem arising from not having equal citizenship rights”.

– 55.9% of respondents did not agree with the suggestion that: “It is the problem of an underdeveloped region in terms of economic and educational levels”.

– 61.4% of respondents agreed with the definition: “The Kurdish problem is a problem that arises because the Kurds want to govern themselves”.

– 52.1% of respondents disagreed with the suggestion that: “The Kurdish problem is a problem arising from the Kurds’ desire to establish a country”.

– 81.7% of respondents agreed with the suggestion that: “It is a historical problem with its origins in the past”.

‘Cumhur Alliance is an obstacle’ 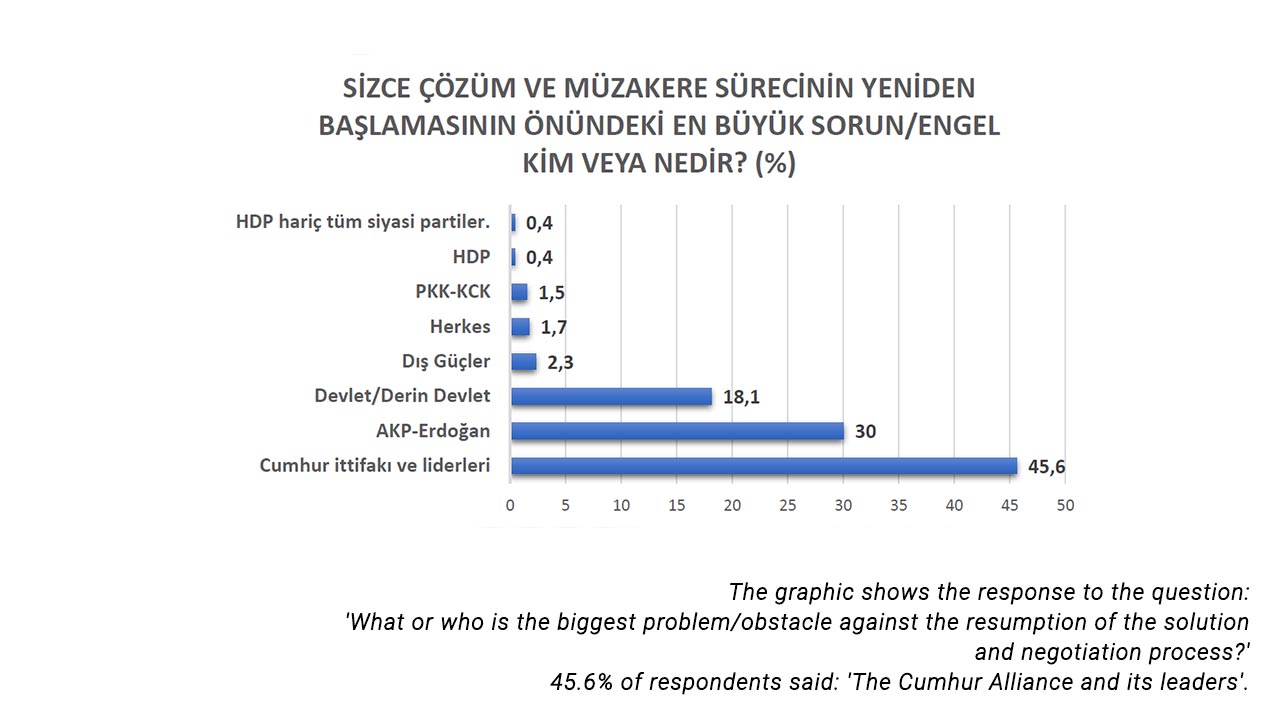 When the participants in the survey were asked: ‘How do you think the Kurdish question can be solved?’, they provided a range of answers. 44.5% of the respondents said: “By returning to the peace/negotiation process”, 29.3% stated “by constitutional recognition and security” and 15.2% stated through “non-conflict and peace”.

When the participants were asked: ‘What or who is the biggest problem/obstacle against the resumption of the solution and negotiation process?’, 45.6% identified the “Cumhur Alliance and its leaders”, 30% “AKP-Erdogan” and 18.1% the “State/Deep State”.