Supporters from Australia, Malaysia, India and Pakistan have called for a hashtag campaign - scheduled to start on 8 October - to demand the release of jailed Kurdish leader Abdullah Öcalan from Imralı Prison.

The Kurdistan Digital Media Council has announced the start of a social media campaign on 8 October, aimed at securing the freedom of the imprisoned Kurdistan Workers’ Party (PKK) leader Abdullah Öcalan.

The campaign is being organised on the date of the anniversary of Öcalan’s expulsion from Syria.

The Kurdistan Digital Media Council made the statement in its Twitter account, noting, “The international ruling powers are continuing their attacks against the search for a democratic and liberationist solution [to the Kurdish Question]. The most merciless of these attacks was having the leader of the Kurdish people, Abdullah Öcalan, expelled from Syria on 9 October 1998 and eventually handing him over to Turkey on 15 February 1999 to become a captive on Imralı Island.”

The hashtag campaign for freedom for Abdullah Öcalan will run through October, and its peak will be on 8, 9 and 10 October at 20.00 CET (at 19.00 Diyarbakır/Amed, Turkey time). Supporters from Australia, Malaysia, India and Pakistan called for the campaign. 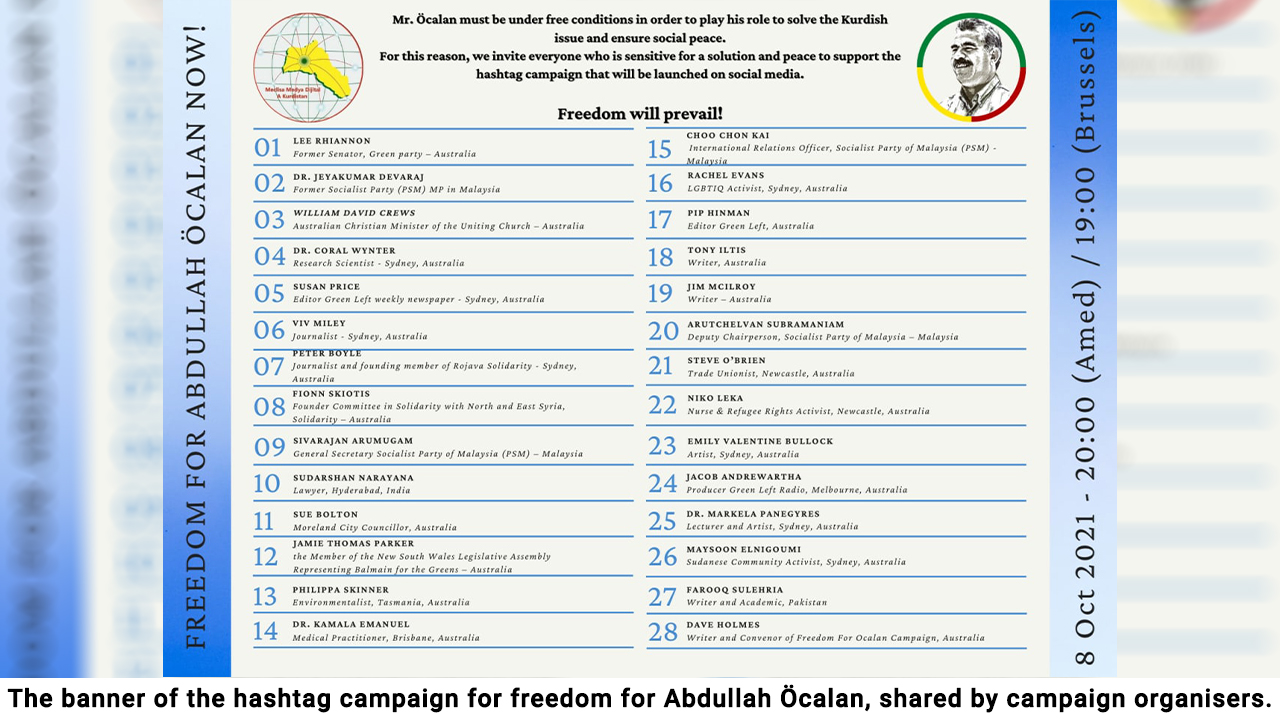 The Council appealed to people to join the campaign, saying, “We call on the Kurdish people and their friends to join our campaign, and cry out, ‘Freedom for Öcalan,’ in every language, in every colour, everywhere.”

“The time has come for freedom for Öcalan. The day has come to raise hope against this historic wrong and injustice. At every point of the campaign we will wave the slogan, ‘Freedom for Öcalan,’ as a flag for democracy and freedom,” the Council added.

The Kurdistan Digital Media Council said that they expected the campaign to spread internationally, stating, “With this campaign we will fight for Mr Öcalan’s health, security and physical freedom in the streets and on social media. With this aim in mind, we announce to the world this united struggle for democracy and freedom and call on all relevant international institutions to take up their responsibilities.”