Russell-Moyle: ‘The British Government needs to re-look at the case for the proscription of the PKK’

Several MPs, during a parliamentary debate, have appealed to the UK government to review its listing of the PKK as a ‘terrorist organisation.’

In a UK parliamentary debate on ‘Kurdish Political Representation and Equality in Turkey,’ held on 2 November, a number of MPs called upon the UK government to review its listing of the Kurdistan Workers’ Party (PKK) as a ‘terrorist organisation.’ They also highlighted linked criminalisation concerns detrimentally affecting Kurdish communities and people, not just in Turkey but in the UK and Europe in a wider context.

Lloyd Russell-Moyle MP, the chair of the UK All-Party Parliamentary Group (APPG) for Kurdistan in Turkey and Syria, expressed his concern over “the Turkish Government’s expansive definition of terrorism: anyone who supports Kurdish political leaders or even just gender equality.”

“It becomes an extremely slippery slope” in this context, he noted with alarm, as people become criminalised in Turkey in frightening ways. He asked the UK government minister present at the debate, the Minister for Asia, Amanda Milling, to extend support in the following way: “Therefore, will the Minister make it clear that supporting Kurdish aspirations for some form of autonomy, supporting Kurdish political leaders, or even supporting those who have renounced violence and who call for dialogue should never be a reason for someone to be fearful of an accusation of ‘terrorism?’

“I do not ask the Minister that for an academic purpose; I do it because recent cases in Belgium, and potential cases in other European countries, show that the Turkish Government is increasingly and proactively trying to persuade their so-called NATO allies to prosecute those who support the Kurds.

“That is producing,” he warned, “a chilling effect in Kurdish communities in this country and around Europe. Any listing must be based on evidence of indiscriminate violence, a determination to undermine and destroy democracy, and an intolerance of other people’s views.

“The second line of defence in the Belgian court case, where the Supreme Court failed to convict the defendants for running a Kurdish newspaper and radio station, was that they were simply not ‘terrorist acts,’ and that the listing of the PKK was based on information that had been discredited.”

He added: “Here is the list of the pieces of evidence that were given to the European Union in the listing of the PKK. One can go through each one of them and show that they are not acts of the PKK. A number of them have been acts of the Turkish police force or Turkish army, and Turkish courts have prosecuted Turkish authorities for such acts, but they are still listed as ‘PKK acts,’ even though Turkey and its courts recognise that they are not. There needs to be a review of this situation, as the Turkish courts have shown.”

In particular, Russell-Moyle noted the significance of a recent Belgian court case and what the lead defence lawyer, Jan Fermon, had to say about the matter: “The court upheld their defence on the first point: that the PKK is a national movement of self-determination in a legal civil war. The treaties on definitions of terrorism that Belgium has signed up to are the same treaties as Britain has signed up to. All bar one explicitly say that if civil war actors are covered by the laws of war, they cannot be regarded as ‘terrorists,’ and the one that does not mention that is just silent about all definitions.

“That is of course quite right,” he observed, as “it is to stop anyone just labelling their opponents as ‘terrorists’ when there is a legitimate internal conflict taking place. Under the Geneva and Hague conventions, the laws of war outline the requirements to be classed as an actor.”

Russell-Moyle: ‘The Belgian Supreme Court found’ that the PKK ‘could not be classed as a terrorist organisation’

As Russell-Moyle noted in the debate: “One of the things is a command structure, and another might be an identifiable uniform. Suffice it to say that the Belgian Supreme Court found on all counts that the PKK fulfilled those requirements. Therefore, it could not be classed as a ‘terrorist organisation.’ In finding that the PKK was involved in a belligerent and internal conflict, the court struck down the ‘terrorist’ listing.

“The same process also happened in the European Court of Justice, where a Europe-wide listing was struck down, and the justices found that the PKK had not met the European or international listing definitions. Although we are not a member of the European Union” any longer, after Brexit, he confirmed that “the laws of war that interpret treaties are now directly part of our domestic laws and we are signatories to the international treaties that they interpret.” 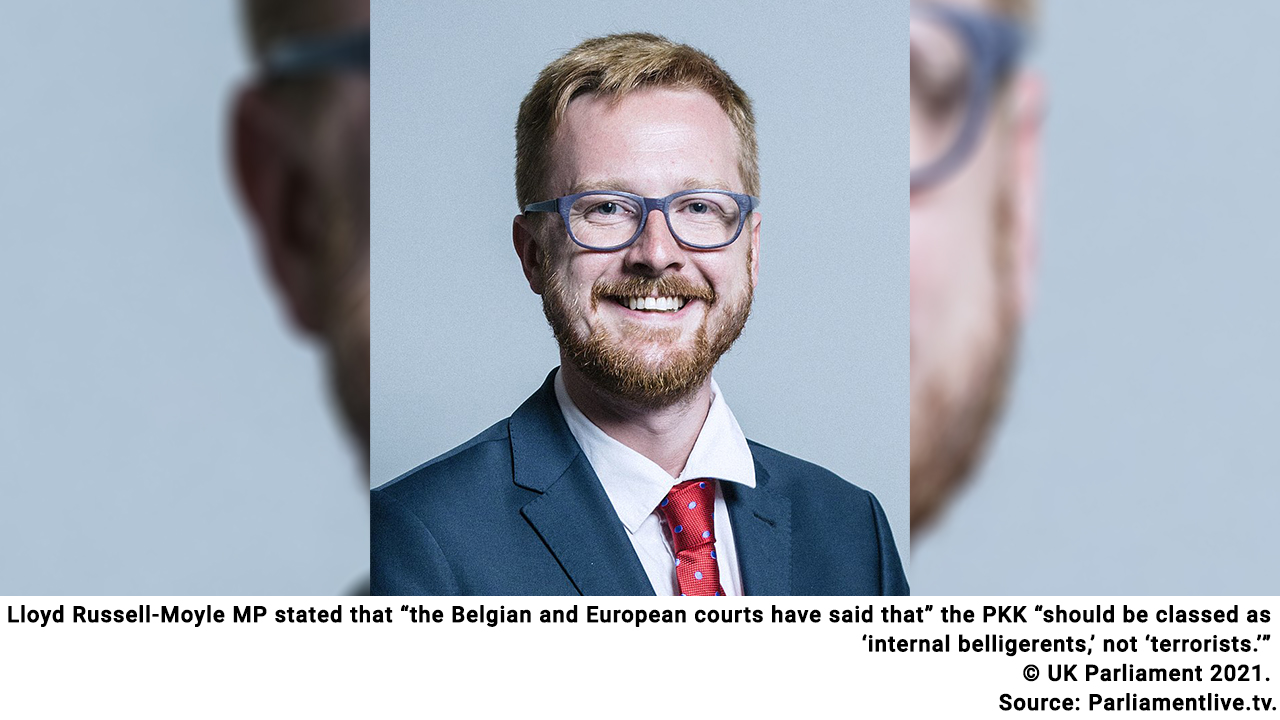 In this context, Russell-Moyle argued that “the British Government needs to re-look at the case for the proscription of the PKK and take into account the latest evidence from the Turkish courts and the ‘terrorist acts’ that were not committed by the PKK but by others. The Belgian and European courts have said that they should be classed as ‘internal belligerents,’ not ‘terrorists.’

“A strong fight against terrorism can be achieved,” he argued, “only if the listings that the Government maintain are accurate and not liable to change. Will the Minister commit to conduct an immediate review with her Home Office counterparts and report back to this House” in light of these issues and concerns, he asked.

He added: “If we are to seek peace in Turkey, we must see how organisations can go from being classed as ‘terrorist’ to seeking political solutions through political aims. The UK’s role in Colombia, although not perfect, and incomplete, shows how the FARC [Revolutionary Armed Forces of Columbia] could be brought into a mainstream political discussion. If we look at our history in Northern Ireland and the African National Congress in South Africa, each is different and unique, but each had a process that has ended politically and not violently, and that is what we all want to see in Turkey.”

In a linked context, he also raised the following questions: “What serious discussions have the Government had with Turkey about restarting the peace negotiations? What practical support has the Government given for domestic and international channels for the discussions?”

Kim Johnson MP: ‘Review the listing of the PKK as a terror organisation’

Kim Johnson (Lab) MP also spoke during the debate: “I want to focus in particular” on the June 2021 All-Party Parliamentary Group (APPG) for Kurdistan in Turkey and Syria report entitled ‘Kurdish Political Representation and Equality in Turkey’ and its “recommendations to revisit the automatic listing of the PKK as a ‘terrorist organisation,’ especially considering the outcome of the case in the Belgian Supreme Court, which found that the PKK was a legitimate combatant in a civil war, rather than a ‘terror organisation.’ That historic ruling must have significant ramifications for our Government’s position. 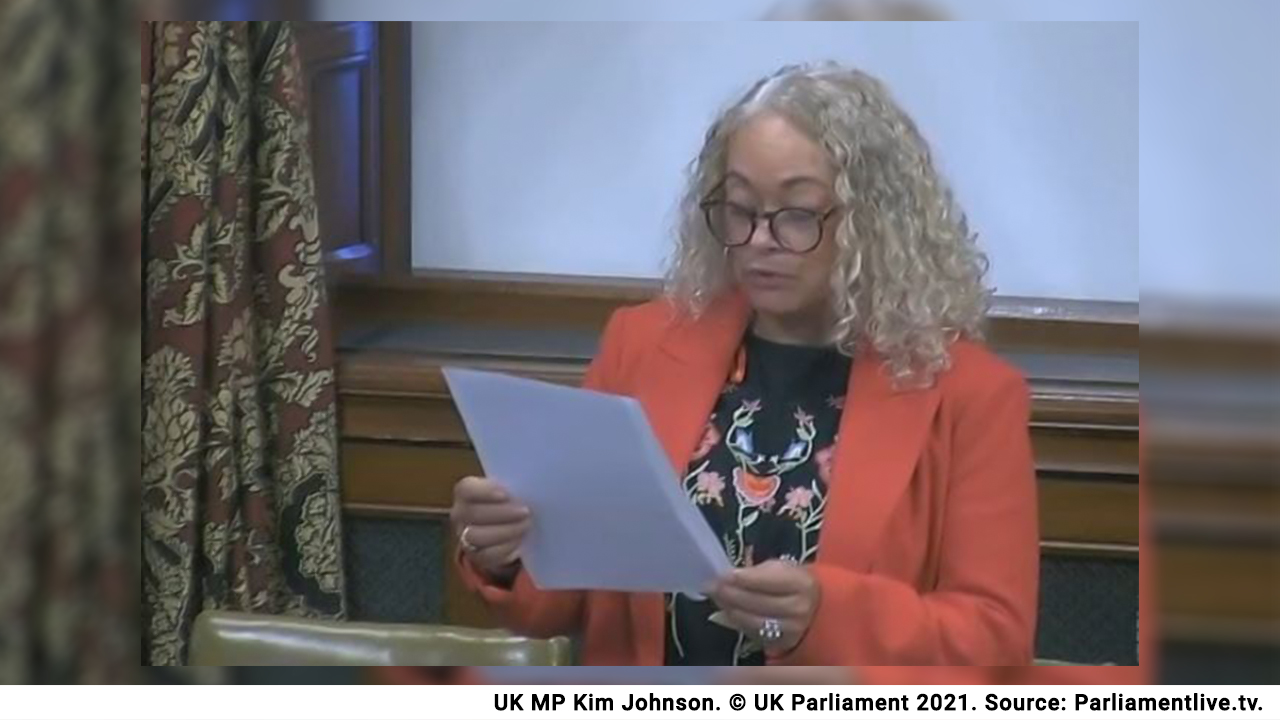 “I call on the Government to take up the report’s recommendations to review the listing of the PKK as a ‘terror organisation’ in the light of that evidence. Britain has a significant amount of power to progress the conditions for a return to peace talks, both as a unilateral actor and through European institutions. (…)

“I call on the Government to do everything in their power to adopt the recommendations, hold Turkey to account as our ally and take urgent steps to secure progress towards resuming peace talks.”

Crispin Blunt (Con) MP also spoke during the debate: “I concur with the points that have been expressed about closely questioning the PKK’s terrorist designation. It is designated a ‘terrorist organisation’ because Turkey has asked us to do that.

“Frankly, that is not adequate and needs proper examination, if possible in our courts, to see if they would come to the same conclusion as the courts of Belgium. I look forward to the Minister’s contribution to see if matters are now moving in a more satisfactory direction in respect of the values we seek to stand for.” 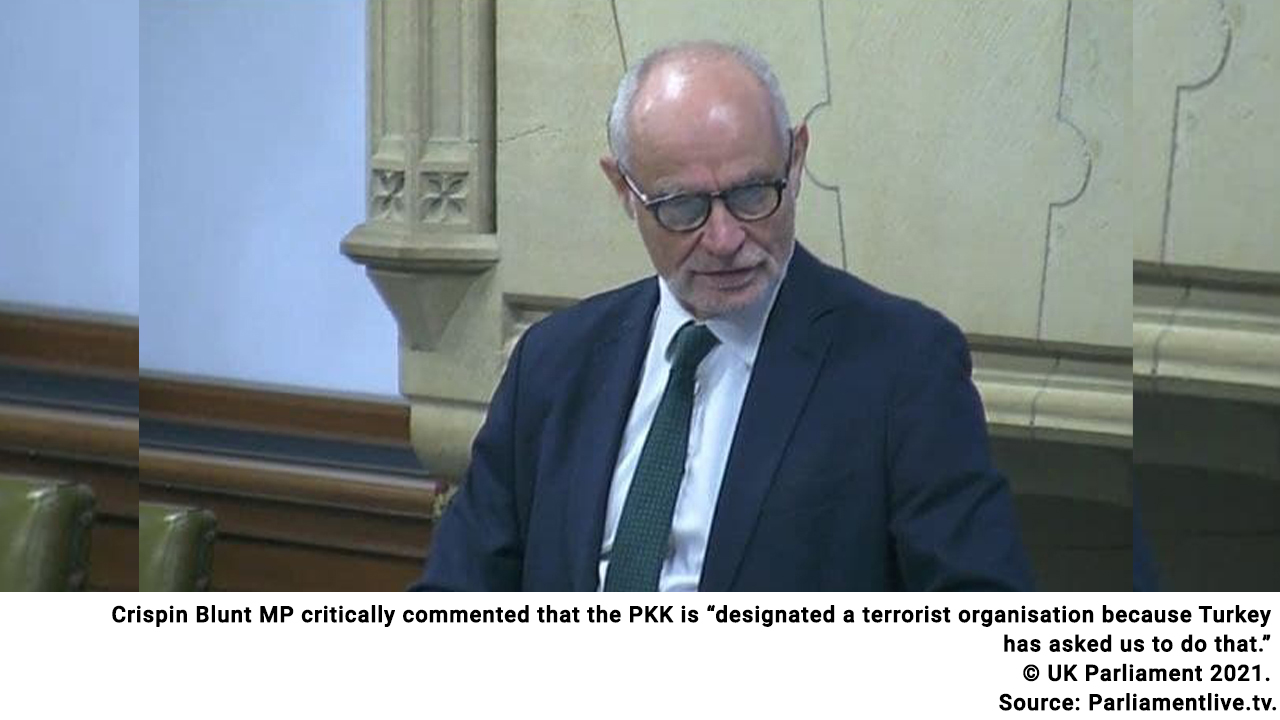 Responding to the appeals from the parliamentarians, the UK Minister for Asia, Amanda Milling, speaking for the government in the absence of the Under-Secretary of State for Foreign, Commonwealth and Development Affairs (due to the summit in Scotland), stated: “It is well known that the UK has proscribed the PKK as a ‘terrorist group,’ as have many of our international partners.

“We do not share the view of the APPG and some Members today that there are grounds to justify unproscribing the PKK while it continues with terrorist activities. According to the International Crisis Group, the conflict has caused nearly 5,700 deaths since the latest peace process broke down in July 2015. We urge the Peoples’ Democratic Party (HDP) to distance itself from the PKK and its ongoing terrorist activity.”

Disappointed by this reply, Russell-Moyle responded: “I am keen for the Minister to elaborate here – or in writing, I suspect – what activities she refers to. To some extent, that will also help us to make sure that we negotiate with the PKK to move away from those activities she alleges, and help us to scrutinise them.

“In the listing in Belgium and in the European Union, almost all the cases that were claimed to be ‘terrorist’ can be examined and, in fact, they were not the responsibility of the PKK, or were the responsibility of other organisations with different proscriptions. That would be really useful for us. Will the Minister do that?”

Faced with this request, the Minister simply replied: “We have a clear position on this, but I will ask my Hon. Friend the Minister to follow up after today’s debate.”