Rober Koptaş: “The Turkish state and the prevailing nationalists view Armenians as an enemy” 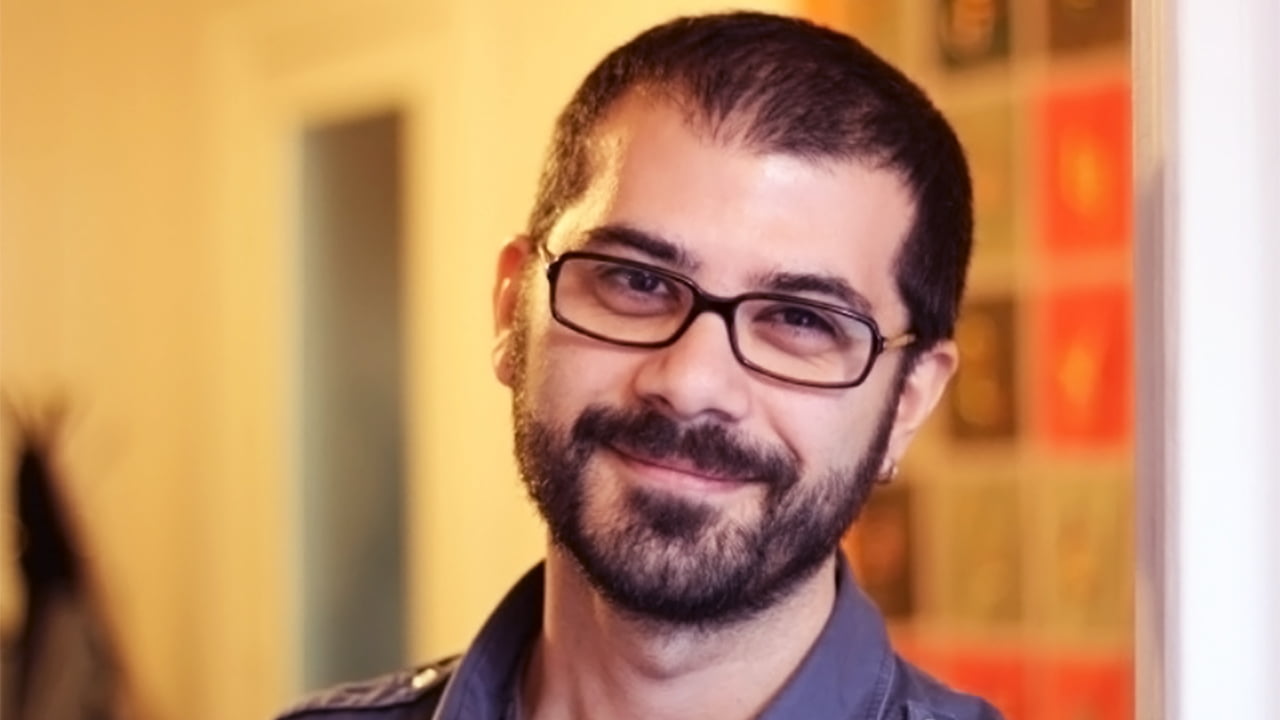 As the conflict in the disputed Nagorno-Karabakh region between Azerbaijan and Armenia has entered its fifth day, there have been provocations against Armenians in Turkey. MedyaNews interviewed Rober Koptaş, a member of the Armenian community in Turkey. He expresses the concerns that other Armenians share in Turkey.

Mobilization and martial law has been declared in Armenia. The United Nations, the United States, Russia, NATO, the Organization for Security and Co-operation in Europe (OSCE) and the Council of Europe have appealed to the responsible parties to end the conflict.

Turkey’s President Recep Tayyip Erdoğan declared his support for Azerbaijan. In a speech, he said: “Armenia has shown once again that it is the biggest threat to peace and tranquility in the region. The Turkish nation stands by its Azerbaijani brothers with all their means”. Armenia’s Prime Minister Nikol Pashinyan called on the international community to ensure that Turkey does not involve itself in Armenia’s conflict with Azerbaijan over the Nagorno-Karabakh region.

Peoples’ Democratic Party (HDP) deputy Garo Paylan raised the issue of the conflict in the Turkish parliament. Paylan asked Vice President Fuat Oktay: “Why are we calling for a war when the whole world is calling for a ceasefire?” Paylan also asked: “Why do you see Azeris as brothers and Armenians as enemies when we have both Azerbaijani and Armenian citizens? Are you not aware that your hate speech against the Armenian people makes Armenian citizens a target?”

On the second day of the clashes, a support convoy for Azerbaijan was held up in Kumkapı, a quarter in Fatih district of Istanbul, on the street where the Armenian Patriarchate is located and the Armenians live. This incident led to many social media discussions, and many Armenians who live in Turkey wrote about their fears in their accounts. 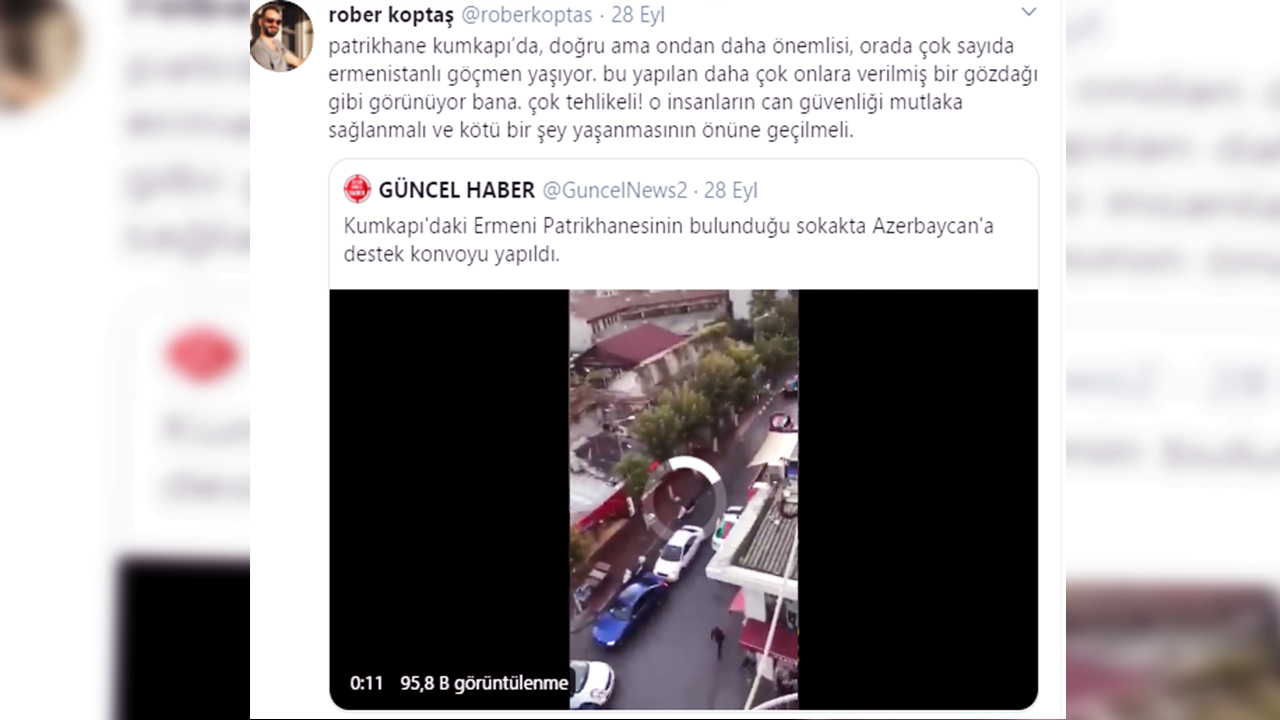 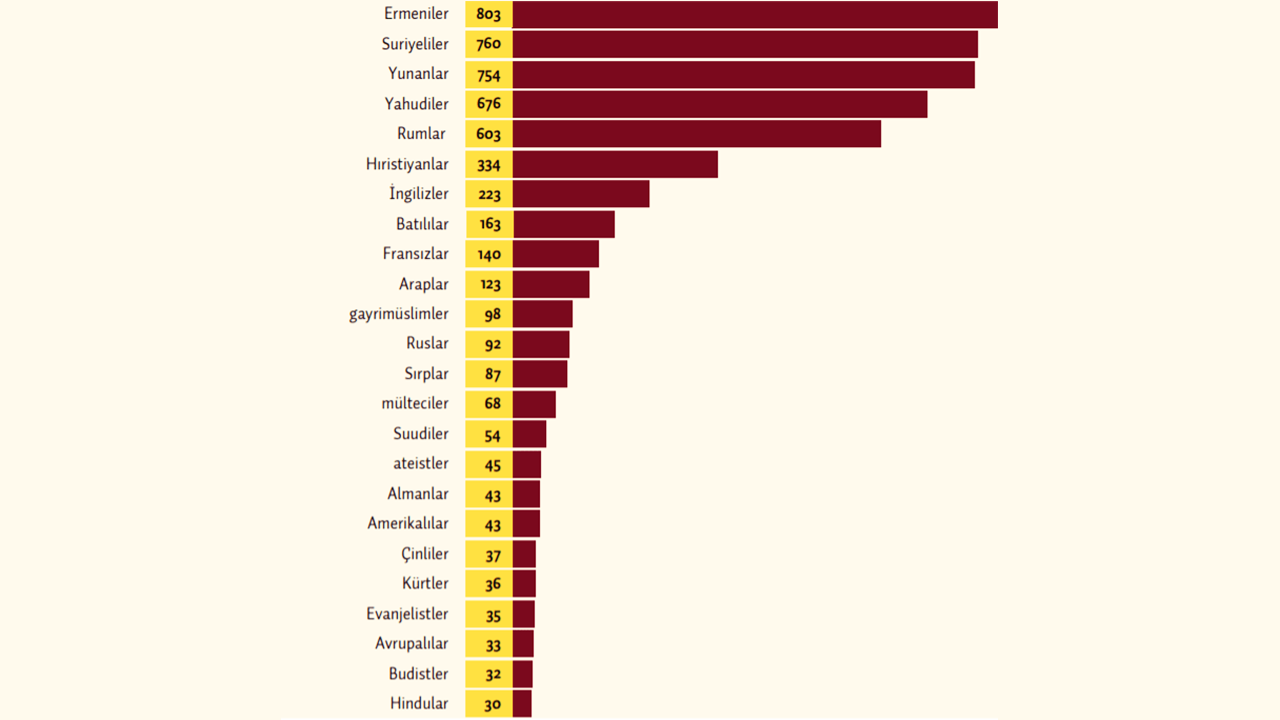 Acts of provocation against the Armenians in Turkey have taken place. The convoy in front of the Armenian Patriarchate, hate speeches in social media: How do you feel about all these concerns as an Armenian?

Turkish Armenians are very small in number. While the country’s population was approximately 15 million 105 years ago, there were 2 million Armenians in these lands. However, today, the population in Turkey is 85 million, but only 50,000 Armenians live here. This small community lives with the traces of all past traumas: genocide, pogroms, and discriminatory practices that have spread fear and anxiety.

That is why this small number of people try to be almost invisible, rarely crossing the boundaries of its community. When an Armenian strays beyond these limits, he/she tries to secure his/her security by changing his/her name, that is, by hiding one’s ‘Armenianness’, or he/she develops discourses just in line with the truths imposed by the dominant nationalists.

However, despite all of this, neither prejudice nor hate speech against Armenians disappears. This is because the Turkish state and the prevailing nationalists view Armenians as an enemy. This ‘knowledge’ has been passed on to Turkish children for generations. Whether Armenians are invisible or ‘loyal’ to the state, this prejudice towards them does not change.

These fears increase when incidents take place of the kind that we have witnessed over the past few days. The nightmares of the 6-7 September 1955 pogrom and genocide come to mind. And this is not an unfounded fear: When you look at the hate speech on social media and television, and the convoys passing through the districts where Armenians live, you realize that it is not unfounded.

Whilst many countries have called for a ceasefire, Turkey has supported Azerbaijan. Can you comment on this?

Turkey has always sided with Azerbaijan during tensions between Azerbaijan and Armenia, but what is different today is that Turkey has given up using diplomatic language. Instead, it openly calls for war. For instance, the Armenia/Turkey border is the only closed gate in Europe. This shows the support of Turkey to Azerbaijan.

Turkey has increasingly been using ‘war-language’ since the conflicts that took place in July. Turkey is selling guns to Azerbaijan, providing military training. Some claim that Turkey is also sending soldiers to Azerbaijan. If we look at what is happening since Sunday morning, we are in a war. Azeri people are called brothers, ‘blood relatives’. I do respect the Azeri people. But I am sure that people in Turkey do not know anything about Azeri culture, maybe they know some popular Azeri songs, or they make jokes about how Azeris speak Turkish. However, Armenians and Turks have lived together in these lands for centuries. But they ignore that fact and build a discourse focusing on ‘blood relatives’. I think this is a racist attitude, and the politics of Turkey comes from a racist perspective.

How do you find the language that the opposition parties use during this conflict?

When we look at the big parties, the Justice and Development Party (AKP), The Republican People’s Party (CHP), The Good Party (İYİ Party), and the Nationalist Movement Party (MHP) declared in a joint statement their support for Azerbaijan even as they condemned Armenia. No other country, no other responsible parliament, did a similar thing. The only party in parliament that has called for a ceasefire is the Peoples’ Democratic Party (HDP). There is no call for peace and dialogue apart from the HDP who represent Kurds. Even when we look at intellectuals, very few people have spoken out in a manner that deviates from the official discourse. It is upsetting that when it comes to Armenians and Kurds, everyone agrees with nationalism.

Giyas İbrahimov, a peace activist from Azerbaijan, was detained by Azerbaijan Security Forces. What was the aim of that operation?

As far as I know, Giyas İbrahimov was detained because of his posts about the war on Facebook. I appreciate him for being so brave in an authoritarian country like Azerbaijan. Aliyev’s regime is oppressive, so they will not let any different ideas spread these days. Armenians and Azeris lived together in the past in Bakü, Karabakh, and in many other places. People who lived during the Soviet Regime are missing those days. Things that happened during the last 30 years changed people, and they became more nationalist. However, I hope people like İbrahimov and peaceful Armenians will build up peace in the future.

Nationalist and racist discourses against Armenians are increasing. According to the 2019 Report by the Hrant Dink Foundation, the group exposed to hate speech the most in the media was the Armenians. Where do the roots of this hatred against Armenians lie in Turkey?

We should go back to the days before the genocide, the days that the traditional structure of society in the Ottoman Empire was changing. Starting from the Sultan Abdülhamit period, Armenians’ demands regarding their rights were always silenced by using violence. Ideologies about Islam’s unity were becoming more common in the country, and the biggest non-muslim community was the Armenian community. Armenians who organized against this violence were called enemies. This mentality wanted to “cleanse society from Armenians” and as a result, the Armenian genocide happened. They killed the Armenians and took over their properties. The Turkish Republic was built on these crimes that were committed against the Armenians. To deny these crimes, the discourse of “betrayal” became the official discourse in Turkey. As a result of this, generations have grown up with this lie that Armenians cannot be trusted. This leads to oppression, attacks, and hate speech against Armenians. Armenians are a useful tool for constructing Turkish identity. Armenians become “the other”, the enemy. We are currently living in one of these phases.

Söyler preserves the art of pipe playing in Diyarbakır in Turkey

Rober Koptaş: “The Turkish state and the prevailing nationalists view Armenians as an enemy”

Söyler preserves the art of pipe playing in Diyarbakır in Turkey