It has been three years since Turkish state occupied Reco, a town in Afrin (Efrin) district in North Syria. The city and it’s surroundings have lost 70% of its population after the occupation. Tens of thousands of villagers have had to leave their lands and migrated to other areas. The people who stayed in the region have to give payoffs to harvest, sell their products or to travel, according to a Yeni Özgür Politika report.

The city of Reco is 30 km away from the northwest of Afrin, a Kurdish town full of olive trees and fruit agriculture. In 2018, almost 90 percent of the population was Kurdish before the Turkish attacks. Only 20 percent of the city population is Kurdish now and the wave of migration continues.

The frontline of the war against jihadists In 2011, civil demonstrations started in the Dera resulted in the involvement of international forces and pressure of the Syrian regime.

The Kurdish people established their local assemblies and self-governed administration with the Democratic Union Party (PYD). In January 2014, the Canton was declared as a form of a new ruling system. Canton’s self-defence forces were organized to defend the town against any attack.

Reco was at the frontline of the war against the attacks of jihadist groups in this period. Reco was also hosting asylum seekers from other conflict areas in Syria.

A town witnessed the peoples’ spring 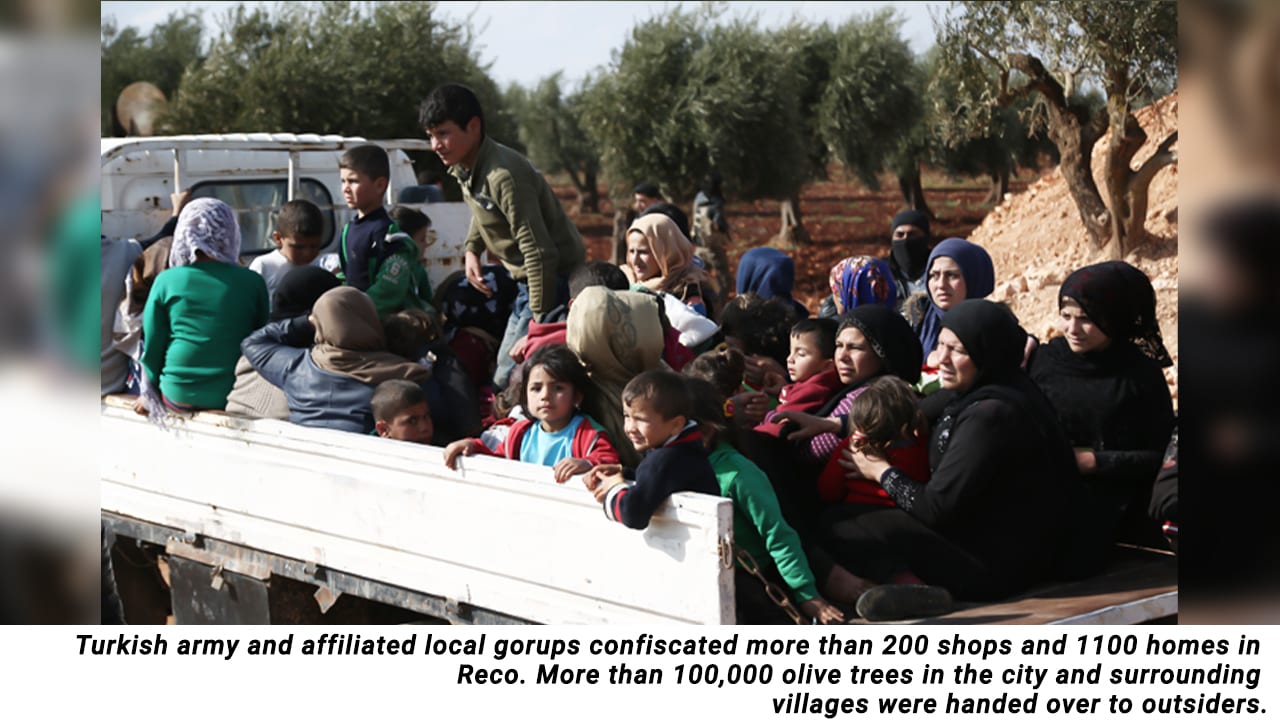 At the beginning of the crisis in Syria, the town’s population exceeded 22,000 and the numbers rose further after people left the city of Aleppo.

The economy of the town was based on the agricultural production ranging from the vineyards, peanut breeding, all kinds of grain and vegetable production as well as olive production were the major areas of production.

Reco, was a rare land, where the jihadist and other extreme groups could not find any ground to organise themselves. The peoples of Reco have also created its own self-establishment,and organised as an assembly. The demographic structure is changed after the massive attacks in the region. 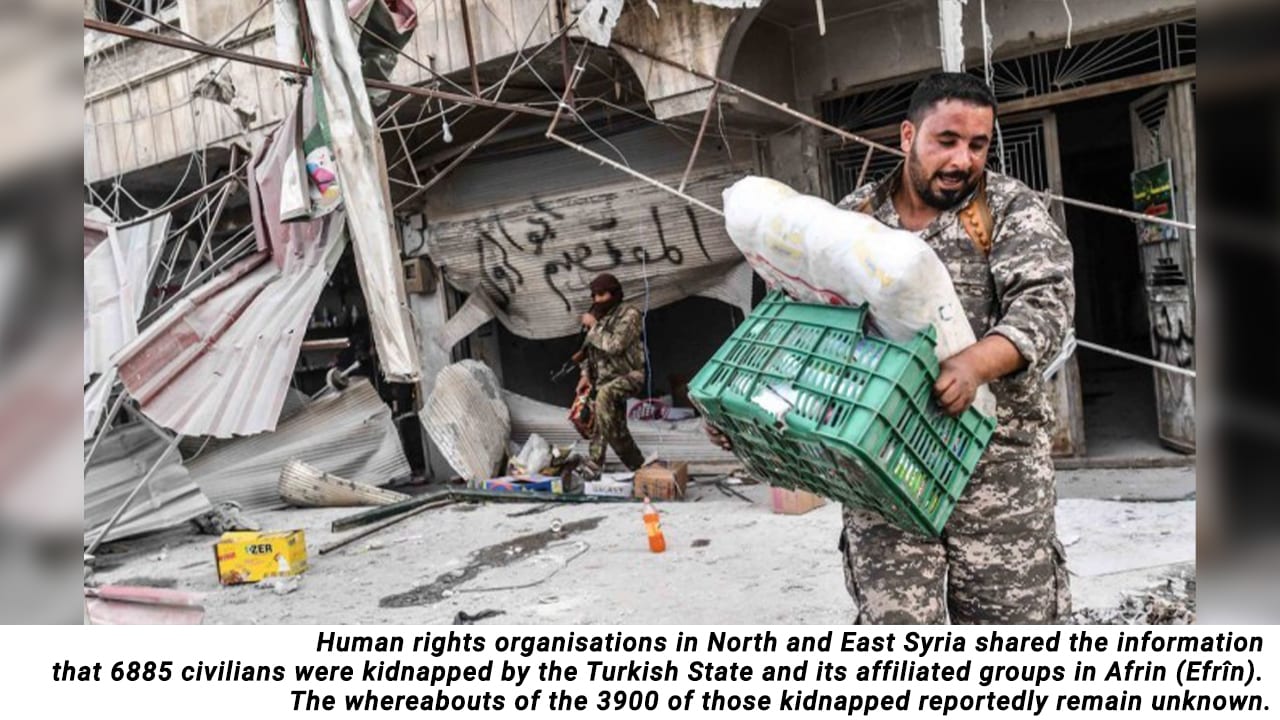 Reco was one of the first places bombed by Turkish forces because of its geographical intimacy. According to the records of the canton, large-scale attacks started on 26 April 2017. The villages of Farfark, Qera Baba and Herkarka Bridge and civilians in other populated areas, were killed and injured by bombing and shelling using heavy weapons. These bombings and attacks was just the beginning.

After an agreement signed between Turkey and Russia on 18 January 2018, Reco became the target of massive attacks again.

The first massive attack started with the shellings of the Turkish air forces of the villages of Qera Baba, Cammaresh, Cisir Herşharka on 17 January 2018. The attack continued over the next days. Hopka village and the city centre of Reco were bombed with Turkish airstikes.

Confessions on the walls 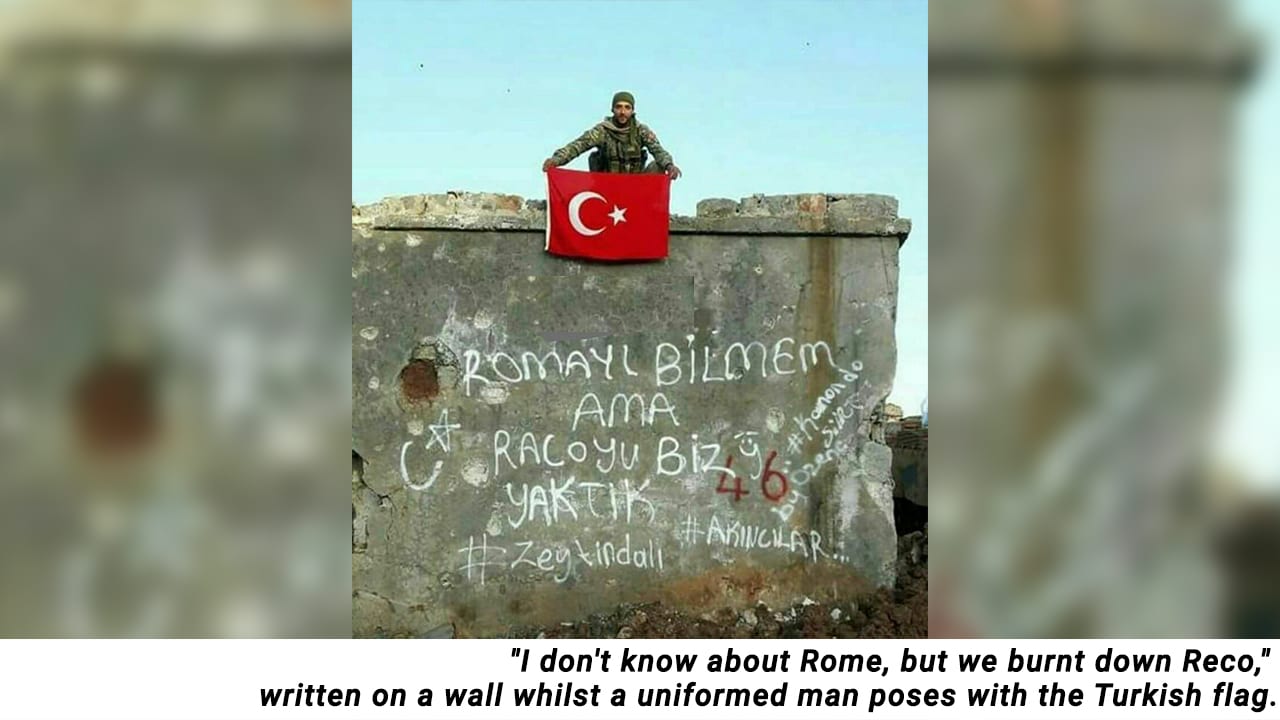 The Turkish army and its affiliated armed groups confiscated more than 200 shops and 1100 homes, according to the data shared by the human rights organisations in North and East Syria. More than 100,000 olive trees in the city and surrounding villages were confiscated by the outsiders.

A post on social media caused much debate regarding the occupation of Reco. “I don’t know about Rome, but we burned down Reco,” was seen written on a wall in Reco whilst a uniformed man was seen posing with the Turkish flag.

However, it was not only this single post that raised questions about the plunder of the town. The Turkey-backed groups reportedly burned down 20 houses and six houses.