Remembering the thousands who died in the Halabja Massacre

The first chemical attack in the Middle East, known as the Halabja Massacre, was the last in a chain of massacres by the Iraqi regime, ruled then by Saddam Hussain. The massacres began in 1983 in the Barzan region, and eventually caused the deaths of more than 100,000 Kurds.

On 16 March 1988, Iran and Iraq were still at war and planes could be observed in the skies over Halabja, a Kurdish town in Iraq that was controlled by the Peshmerga forces.

While some people rushed into shelters, others continued their daily routine.

In a matter of seconds, Halabja was shelled. Falling bombs broke all the windows, but the second round of bombing was different. Eight MIG-23 war planes shelled Halabja with chemical weapons filled with poisoned gas.

Later, survivors shared their memories of those horrifying moments. They said that “Halabja smelled like apples”. The smell of apples filled the homes and the shops and the streets of Halabja. But this was actually the smell of death.

More than 5,000 Kurds, including babies, children, women, and the elderly, are estimated to have been killed when Saddam Hussein’s forces dropped mustard and sarin gases on Halabja.

Known as biggest chemical weapons attack ever directed against a civilian-populated area, the Halabja Massacre targeted Kurds who were opposed to Saddam Hussein’s regime.

The attack left 7,000 people wounded, while many residents of Halabja still suffer the after effects of the chemical gas. Their physical health is compromised, but there is also the traumatising effects of what they saw, images that are still vivid 33 years after the massacre. 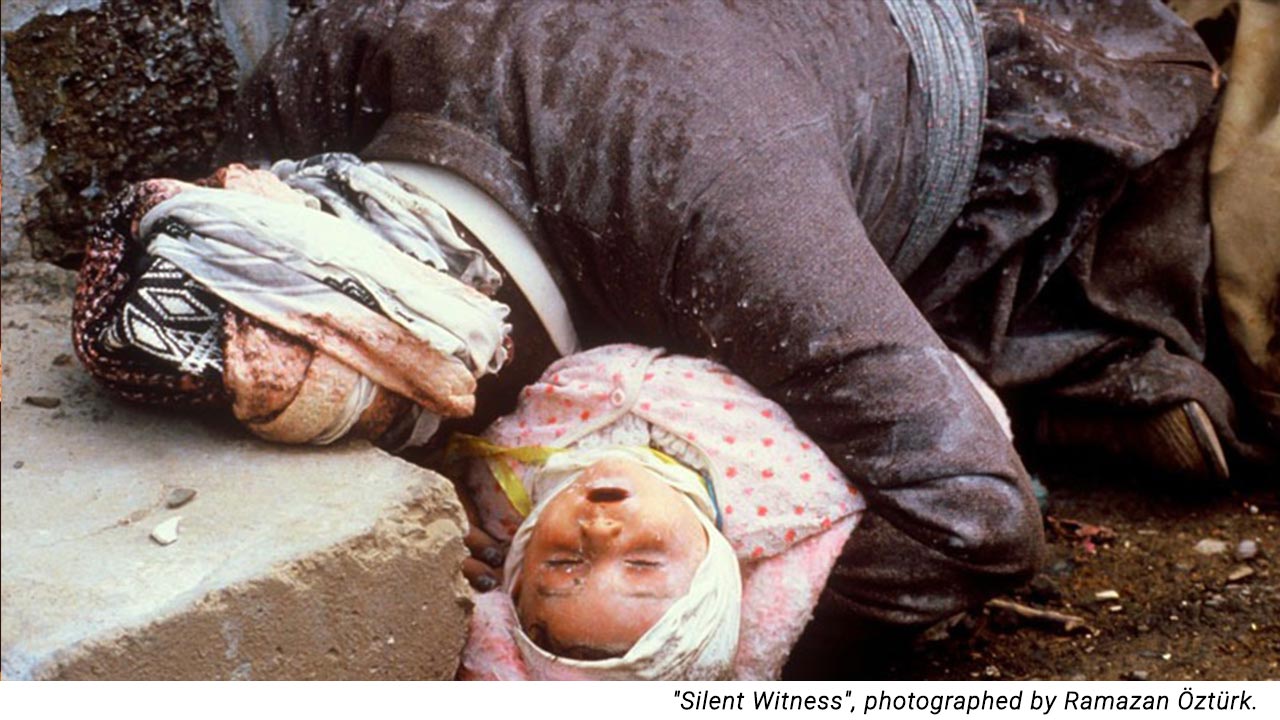 Ramazan Öztürk was among the first journalists who reached Halabja after the bombing.

In one of his photographs, Ömer Xaver is seen dead on some stairs, holding his son, whom he was trying to save.

This striking photograph, titled “Silent Witness”, is considered a frightening but permanent symbol of the Halabja Massacre.