Racist violence breaks out in Turkish capital against Syrians and Afghans

Syrian and Afghan refugees living in the Turkish capital have been the target of violent racist attacks last night. Constituting almost five percent of Turkey’s population, refugee communities are subjected to a rising wave of racism in Turkish cities.

Emirhan Yalçın, aged 18, was killed on 11 August during a fight between Turkish and Syrian groups in the Battalgazi neighbourhood of Ankara, mainly populated by Syrian refugees.

Following the death of the Turkish youth, civilian Turkish groups formed a mob and looted Syrian-owned businesses in the evening hours, violently attacking and breaking down the windows of the stores owned by Syrian shopkeepers in the Önder and Battalgazi neighbourhoods.

The attacking crowds stormed the neighbourhoods carrying Turkish flags, chanting “takbir, Allah u akbar”. During this public lynching campaign, many vehicles were also set on fire. 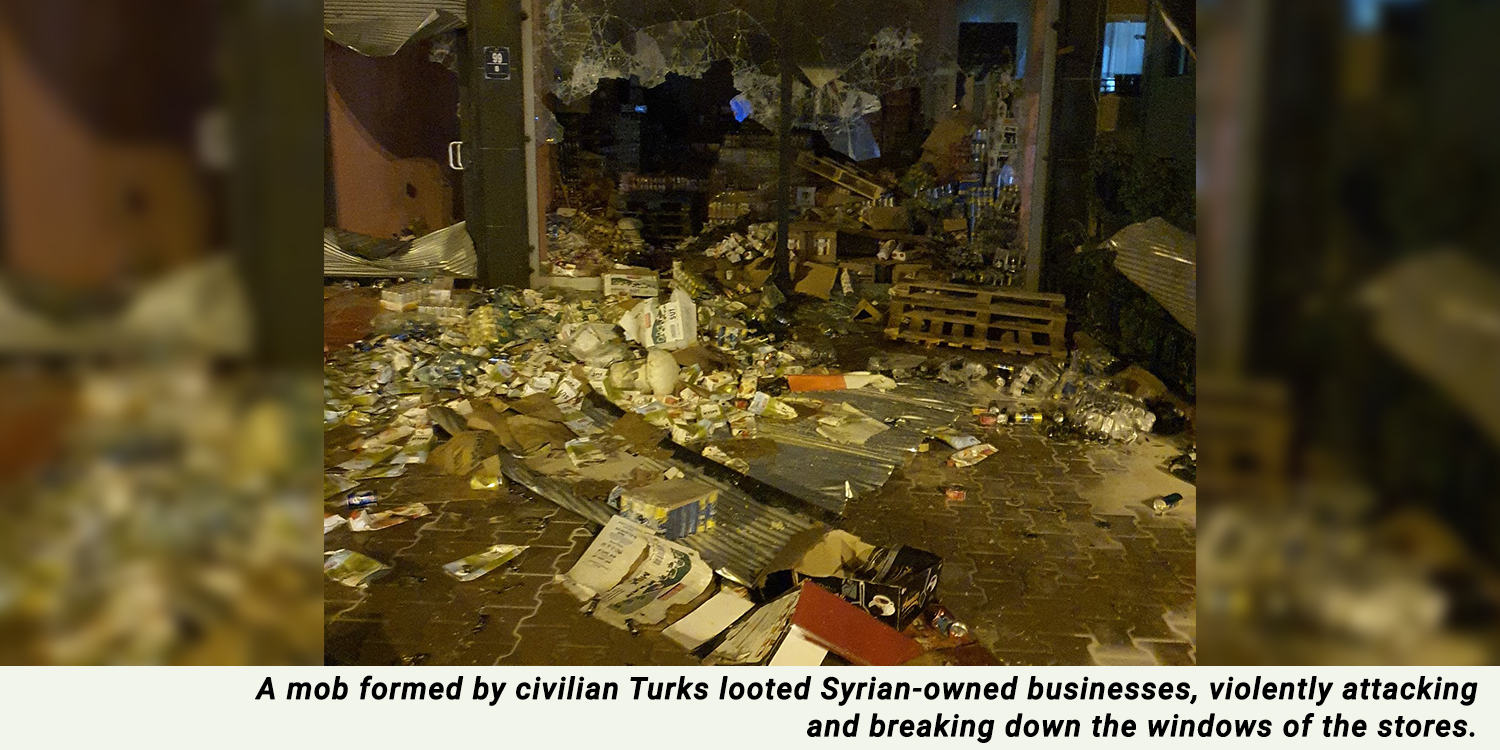 Some refugees left were able to leave the area in busses of the neighborhoods where their lives were under serious threat whilst other families were stuck at home, in fear and helplessly waiting for the crowd to disperse, according to T24.

Even after the police arrived at the scene, the violence continued to spread in the neighbourhoods where the angry mobs attacked the homes, cars and stores of the refugees. 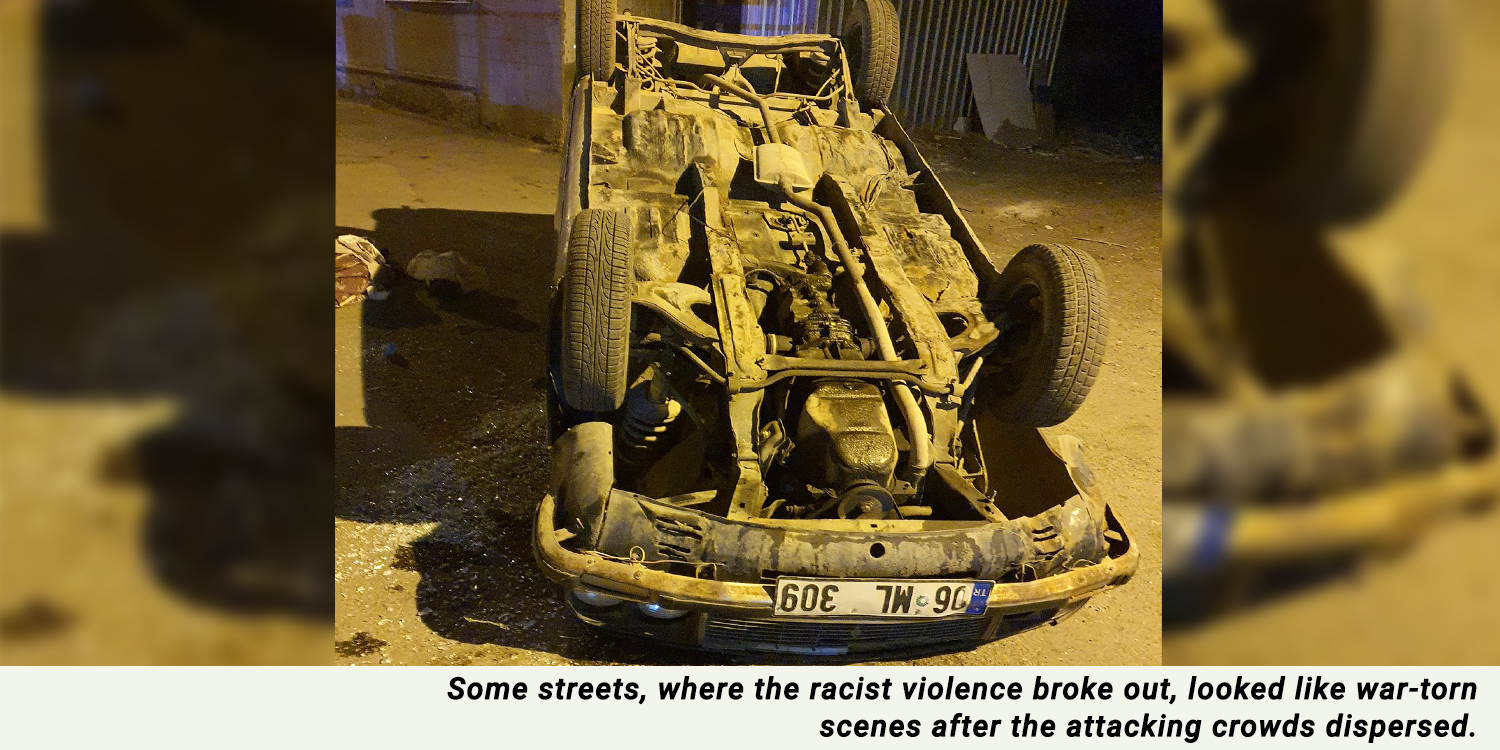 Despite the increasing intensity of the violence threatening the lives of many Syrians and Afghans the police still did not intervene or disperse the crowd, according to MA. 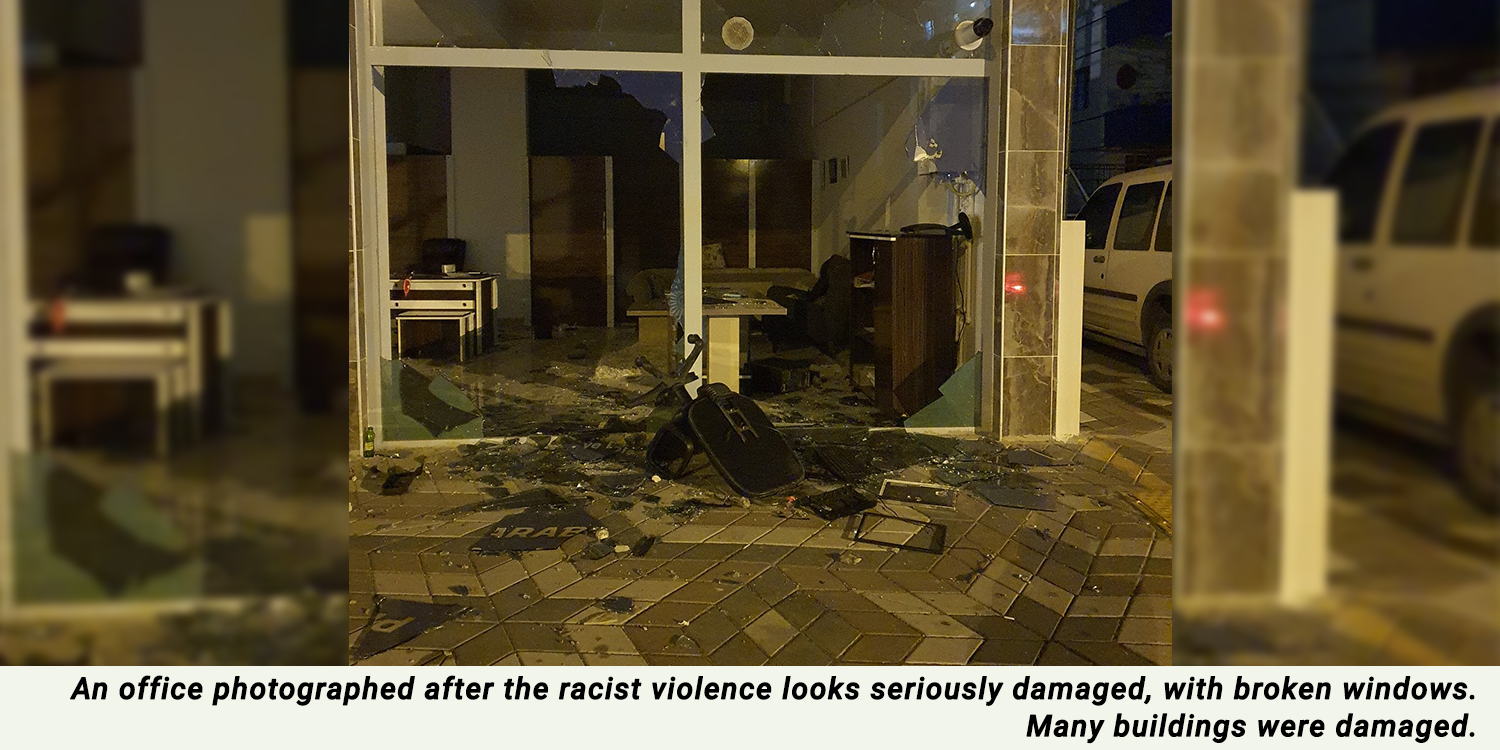 Whilst the mobs stoned the homes belonging to Syrians and Afghans in video footage from the scene, attackers amongst the mobs were heard shouting in a racist tone, using words like, “We do not want Syrians, the only brothers of the Turks are the Turks, we have voted for the AKP [Justice and Development Party], but now we call on our president it is either us or the refugees.” 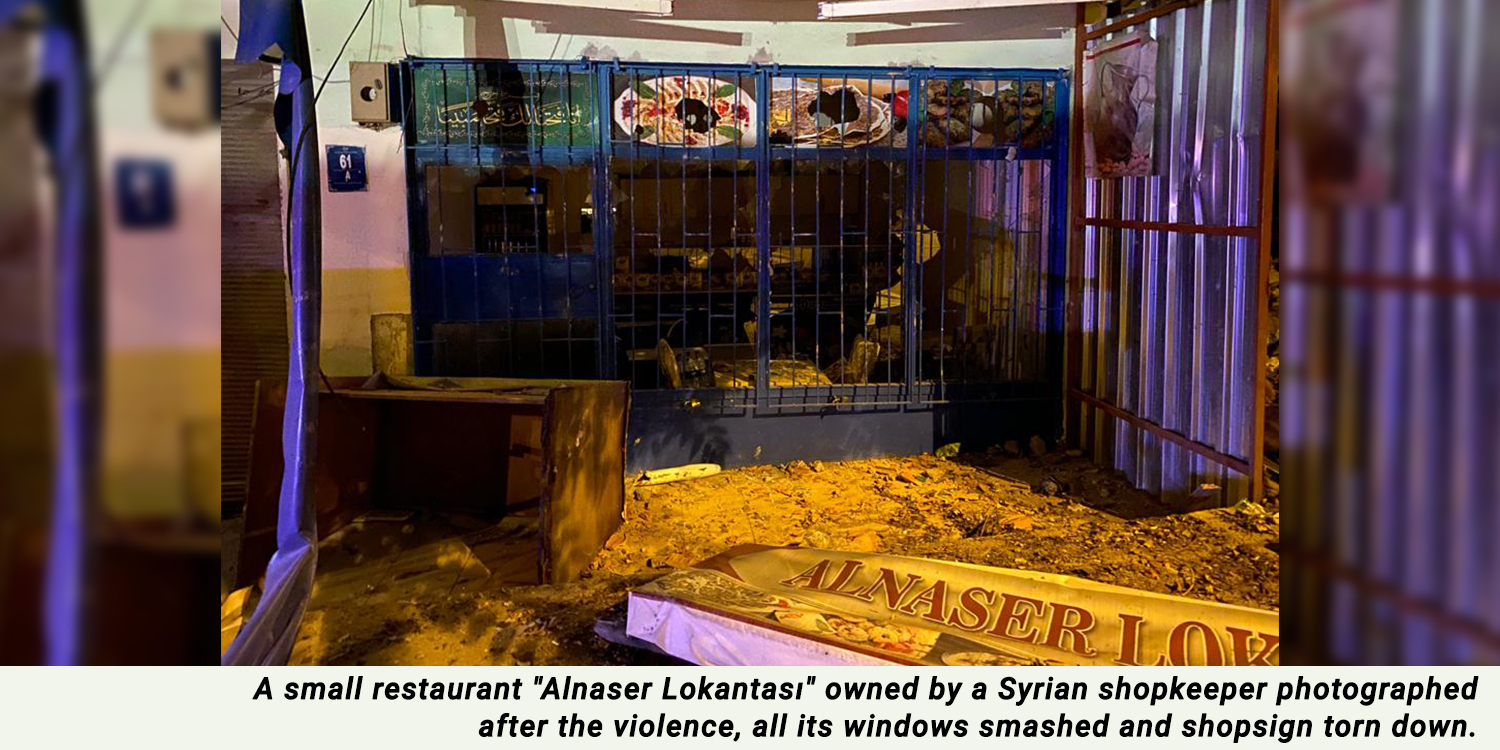 Ankara governor’s office after midnight announced the end of the violent attacks on Twitter, thanking “the calmness of the citizens and hard efforts of the security forces”.

“It is kindly asked that our people do not give credit to provocative news and posts,” said the governor’s office.

Ankara Security Directorate announced that there was “no vehicle or building that was set on fire” during the mob attack.

“Legal action has been launched against those who broadcast such provocative posts and video footage,” said Ankara Security Directorate, targeting mainly the people who share “posts and news” about the racist mob violence, rather than those who actually took part in the violent action. 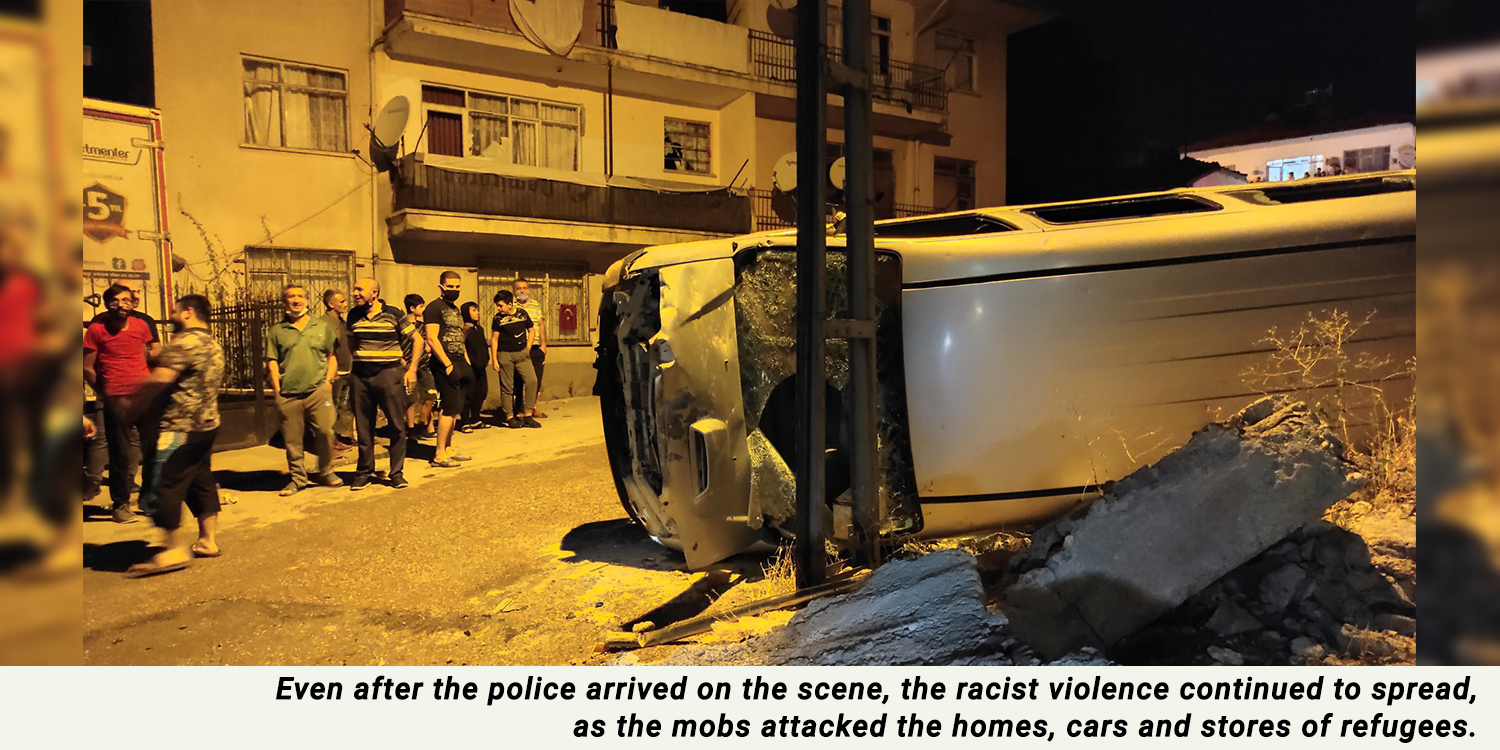 Similar violence against Syrians and other refugees has occurred in previous years. Following the deaths of 33 Turkish soldiers in an air strike by Russian planes in northeastern Syria in 27 February 2020, violence aimed at the Syrian community broke out in several towns across Turkey, France 24 reported.

Turning refugees into objects of fear and loathing came as a result of the political narratives based on a phobia of the outsider currently dominant in the Turkish political narrative and the discourse of this authoritarian regime targeting “the other” based on race, ethnicity, religion, sexuality and language.

Kurdish people have been raising the issues of the rapid rise of racism in Turkey following several racist attacks targeting the Kurds. Amid such a tense atmosphere racist attacks against Syrians and Afghans followed.

Seeking to end the irregular migration from Turkey to the European Union countries, the parties signed the EU–Turkey Joint Action Plan in 2015.

The EU began disbursing 3 billion euros for the facility of keeping refugees inside Turkey on June 2016 as part of the EU-Turkey deal, as announced in a European Council statement.

Six years after the EU–Turkey deal on keeping refugees inside Turkey, the achievements of deal have been a controversial topic as refugees have become ‘weaponised’ as an instrument of diplomacy and even a black-mailing tool for Turkish president Recep Tayyip Erdoğan to maintain his relations with the EU.

Yet, the EU is about to give Turkey extra massive funding again to incentivise Turkey to keep refugees inside of its borders, 3.6 billion euros over the next few years, European Union leaders announced on 25 June.

The negative attitudes of Turkish citizens to refugees, in relation to co-existing with Syrian refugees was compounded by Turkey’s authoritarian political climate and an ongoing economic crisis.

There are several studies showing that the perceptions of Turkish citizens vis-à-vis Syrian refugees has significantly swung to a negative perception. According to Turkish-German University’s Migration and Integration Research Centre, 72 percent of Turks believe that Syrian refugees will harm Turkey’s socio-cultural structure while 82 percent of Turks feel they have no cultural commonalities with Syrians.

The Turkish government’s attitude towards the approximately four million Syrian refugees living in Turkey changed in July 2019 when it faced a blow in the local elections, losing all big cities, including Istanbul, Ankara and Izmir to the opposition.

Since then Syrian refugees have been targeted and subjected to a witch-hunt like campaign by the Turkish police, some being deported as others were constantlybeing encouraged to go back to the regions controlled by Turkey in northern Syria, including the conflict zone Idlib.