Protests and the future of Lebanon

Nabila Ghosein is a Lebanese journalist, director and activist. She has written many articles about feminism and activism and has always defended the weak, oppressed and marginalised. She has been with the protestors of Lebanon since day one, as well as with other oppressed people such as the Kurds and Palestinians. After her visit to Sinjar, she directed a movie about the massacre of the Yazidi people. She was asked about her point of view and thoughts on the revolution in Lebanon, the new protests in Tripoli, and how she sees the future of the country. 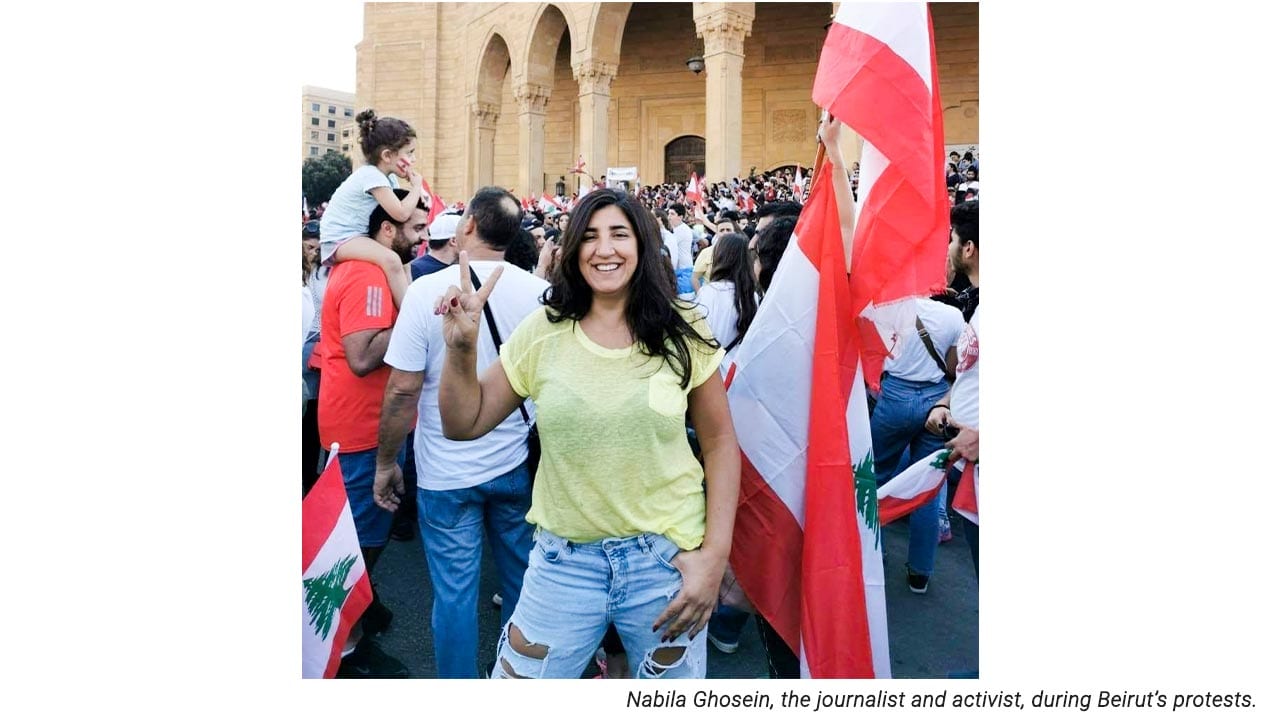 Regarding the 17 October revolution in Lebanon, she said, “I can’t separate it from the previous movements and protests by the Lebanese people several years ago, from the campaign to bring down the sectarian system to the ‘toleet rihetkon’ campaign to end the garbage crisis which suffocated the people. We always say that real action is a series of cumulative actions. October’s revolution was a stage or a step in a series of actions, and whatever protests or revolutions come afterwards will be wider, broader and will include new social segments and various new concepts”. 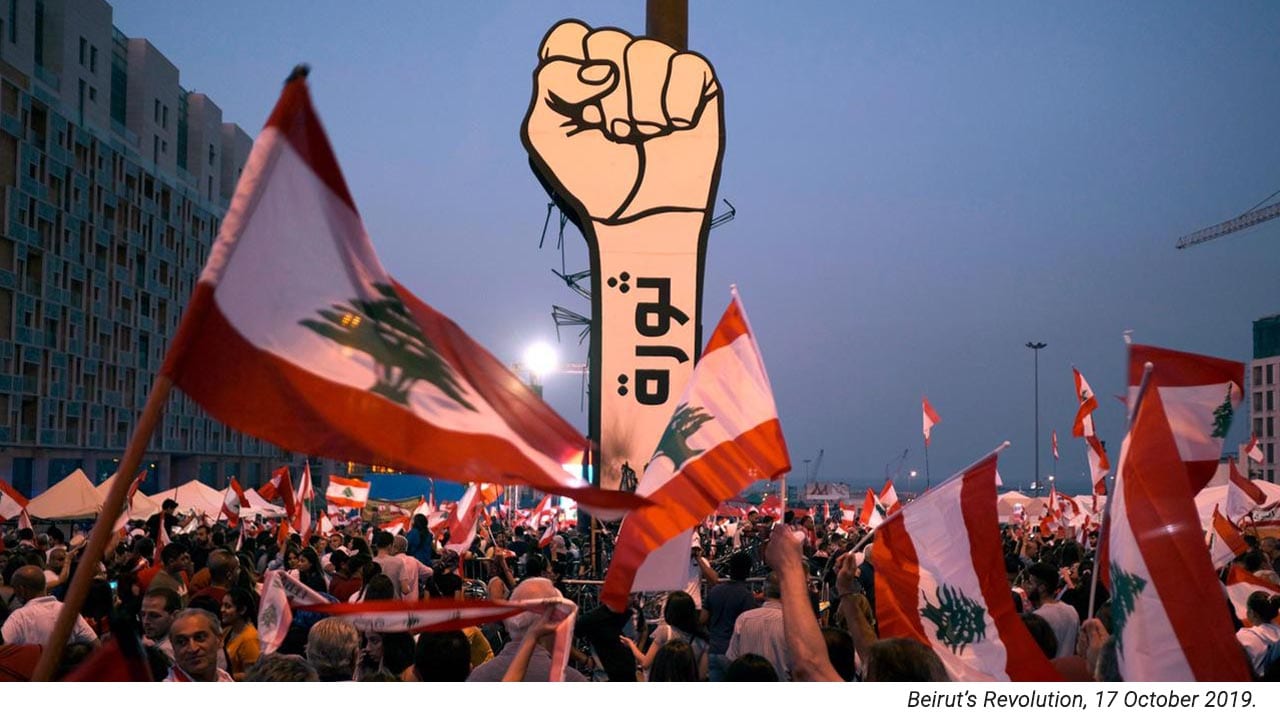 Reasons for the revolution

“There are many reasons, whether direct or indirect, for the uprising of 17 October against the government”, said Ghosein. “The direct causes, which were the flame to the fire of rage, were several situations that the government couldn’t handle. Examples include putting taxes on the WhatsApp application, the huge fires of Michrif that the government admitted it didn’t have the supplies and abilities to control, the TVA on almost everything … These showed people how irresponsible and ignorant our government is that it did not have an emergency plan in case of huge fires, no helicopters or drones to put it off, no quick solutions to sudden problems, delay and laziness in their actions and so on.

“The other causes, which have worsened over the years, were hard living conditions, poverty, chaos, corruption, absence of a real government that would help and solve its people’s issues… Each party or sect wants its own benefit rather than the whole country’s, and each politician or person in power wants to serve only his own audience”. 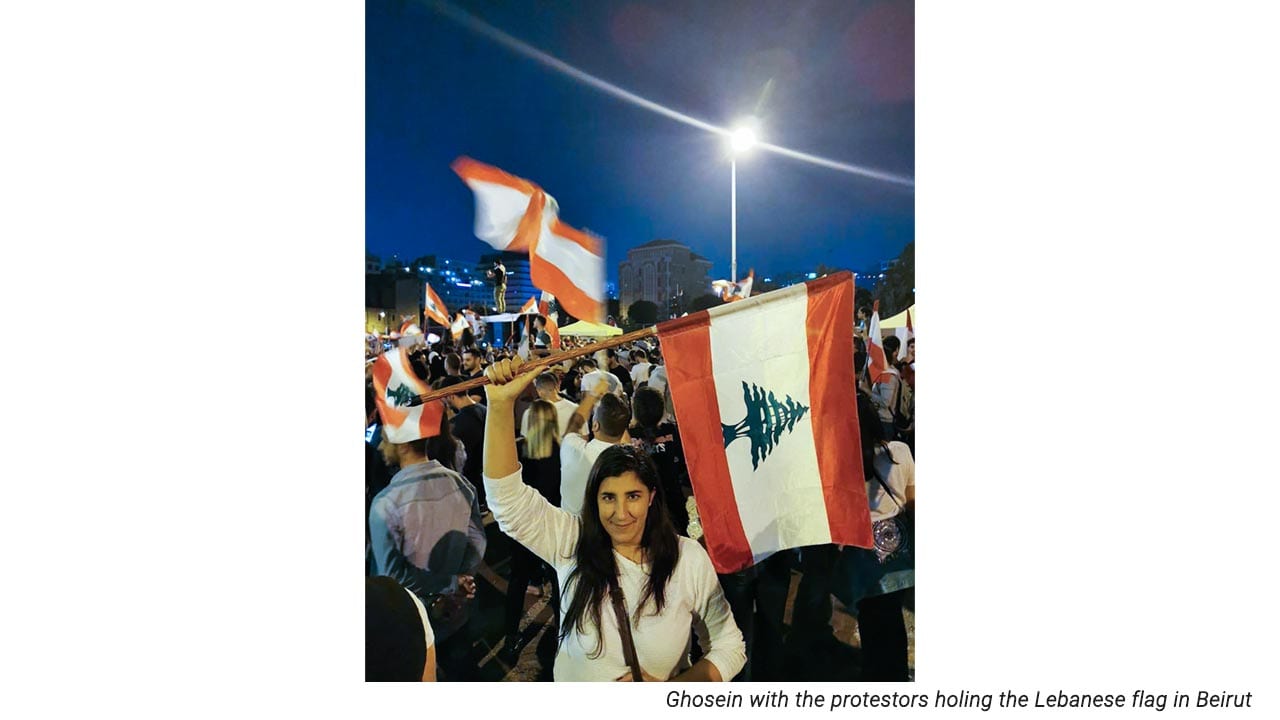 What is special about the 17 October Revolution?

“What made this revolution special was the participation and the presence of the new generations and youths on the ground against the government, even if these people were present only for the first few days. This shows a very clear picture in our minds of how spontaneous and transparent and honest this revolution was. The way everybody from all sects and religions and ages was next to each other and having one purpose and one voice in the first few days of the revolution was the real true part of it all. After that, each party leader started giving his political speeches and dragged his people out of the revolution whether by new promises or by threats. To be honest, this was normal and expected in a country where parties and sects have control and power over their people instead of laws and justice. People, brainwashed I would say, couldn’t easily leave or get over their political concerns or even political fear”.

Where did things go?

Ghosein explains: “There are a lot of factors that thwarted the revolution. The pandemic, for instance, was a very important factor. The spread of the virus among people would turn catastrophic if the people kept gathering and showing up in crowds. People’s health comes first of course. Other factors were the economic crisis, where people’s jobs and small businesses ended because of Covid and the lockdowns going on… People were looking for a way to bring home food and their families’ necessities amid very hard conditions. Also, the political interference made a lot of people leave the revolution and muted their voices.

“Moreover, we revolutionaries still don’t have enough maturity or the mental ability to recognise how to use and direct our rage and anger. That’s why we were accused of being supported by foreign embassies or being funded by the outside. This was because we lacked experience and weren’t completely ready to know how to direct and control and orient our rage and thoughts and voices”. 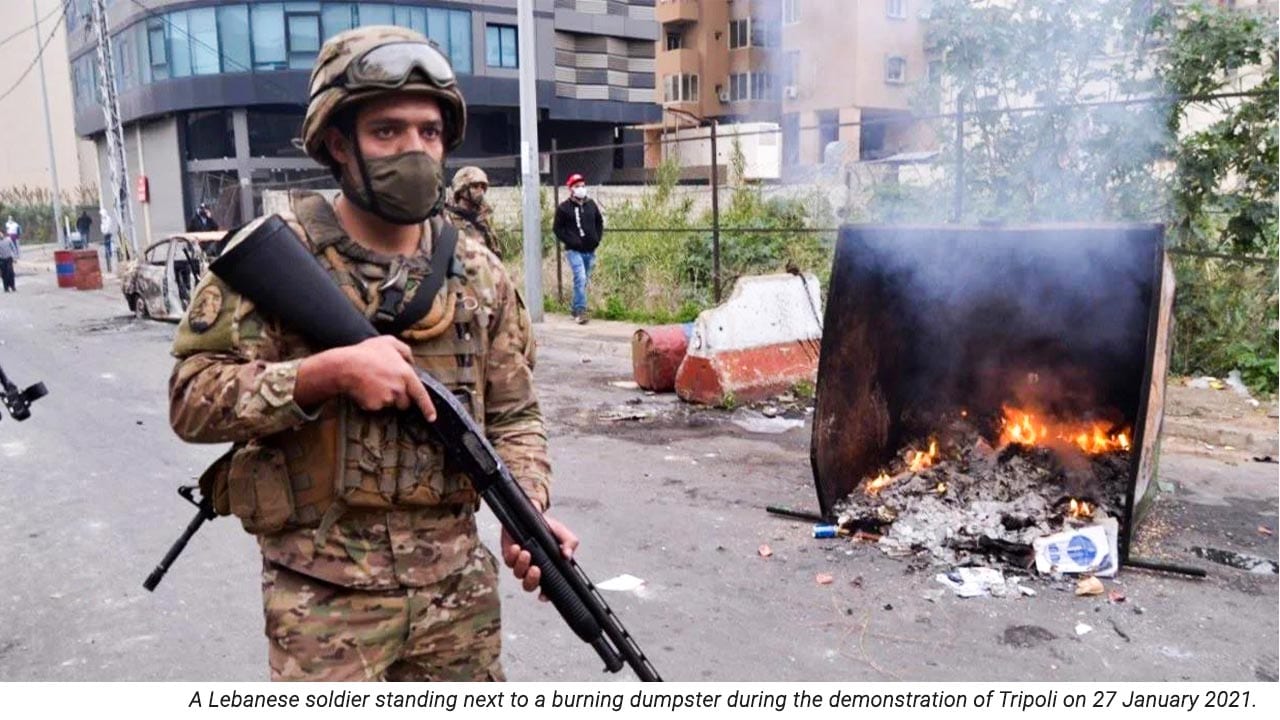 “I consider the revolution in Tripoli to be a continuation of the 17 October revolution. I wouldn’t relate everything to October’s events because all people should learn how to control and direct their potential. And most importantly, the main purpose of activism should be to end the sectarian system and lay the solid foundations of a methodology for a social justice system, a system that could guarantee the rights of all sects and marginalized groups.

“I can also consider what happened in Tripoli as a new revolution and new event that has nothing to do with October, because Tripoli has its own features. Tripoli has been known for its poverty and chaos, being marginalised and ignored and systematically and deliberately politicised. It’s one of the poorest cities in Lebanon and never gets the attention it deserves as a city with a large population”.

Is there a group behind the Tripoli protests?

Nabila answers: “I never believed there would be anyone behind any protest or action done by the people of a country. No one and nothing leads to action except the people’s own suffering, own pain and hunger… Their rage over their conditions is the first drive towards revolt. I wouldn’t totally deny the attempts of other political parties or foreign countries that may want to twist and distort the people’s revolution to their own benefit whatever that may be. But there will never be a more important drive to revolution than the people’s own pain”.

“I personally do not count on foreign initiatives even if they may be useful sometimes. I say this because we have seen previous initiatives that turned out to be helpless: the French initiative to help form the Lebanese government, for instance. And this failure is because our political characters and parties in Lebanon do not really care about anything else except what may come to their future benefit, what may be useful for their people in the country and their supporters and allies from other countries. So any initiative, not only the French example, will not work and will not be helpful if it doesn’t fit every Lebanese leader of every sect, which definitely sounds impossible. 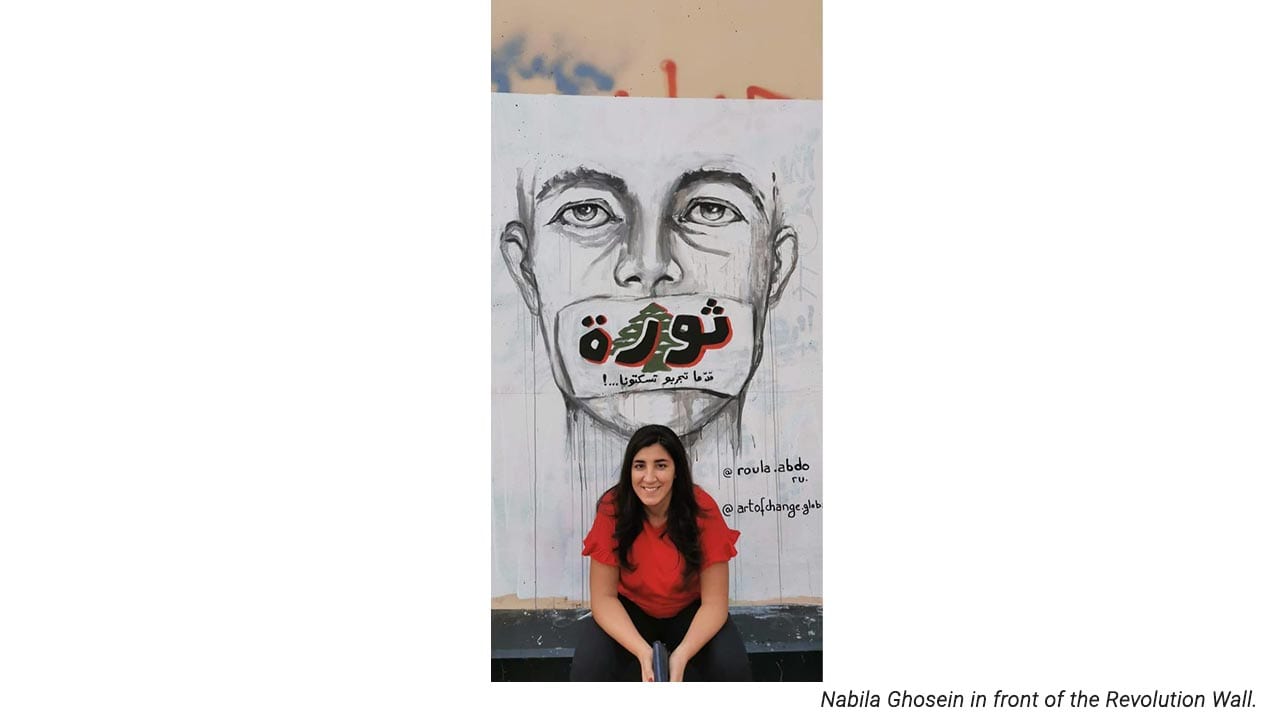 “My personal role is actually divided into two parts: as a Lebanese citizen and as a journalist. As a journalist, I always try to shed light on injustice, corruption and people’s suffering and issues, straighten things out and work on investigating and revealing the subtleties and hidden corrupt projects and actions. Personally, as a Lebanese citizen, I always work on keeping our voices heard, always demanding and claiming our stolen rights and never giving up for the people in power. At the elections, I must know who I am giving my voice to. I may not participate in elections when I feel there is no one worth electing, or I may submit a white clear paper. This is all I can do, because the size of the catastrophe we are in exceeds the ability of individual roles and trials to serve our country and straighten the mistakes of our politicians who destroyed every bit of Lebanon. This also applies to the NGOs and associations of civil society. This is proven after all the protests and revolts because even with so many people taking part none of it made a difference”.

The future of Lebanon

“I also say that we still need a lot of knowledge and awareness and experiences, and I don’t know how we’ll get them. Regarding Lebanon’s future, I may say that we won’t get over the economic crisis and hard conditions in less than five to six years, if not more, because there hasn’t been any clear policy to try find a solution. We always try to count on foreign help and aid from financial grants or conferences, and this never builds a country back. So, I do not see how we can overcome what we are going through, and even if we did, we would eventually face these problems again in ten to fifteen years. This has created desperation and depression in people, especially the youth, which has caused a lot of international immigration so that they can secure their futures”.