President Erdoğan: “It is crystal clear: World War I is not over yet”

At home, President Recep Tayyip Erdoğan has given many speeches that are not mentioned in European media. He has promised his voters to create the Greater Turkey that Atatürk failed to achieve. When the media is silent, it’s easier for other state leaders to pretend that they don’t know that Erdogan’s violation of international law is part of a general strategy.

Today, we should view the invasion of northern Iraq, which started on April the 17th, in light of the promises made by President Erdoğan. To understand where Erdogan is moving, we should take a look 100 years back in time.

The Ottoman Parliament adopted the National Covenant – Misak-ı Millî – on January 28, 1920. It was later ratified by the newly established Turkish Parliament. General Mustafa Kemal – who later took the name Atatürk – had written the document. 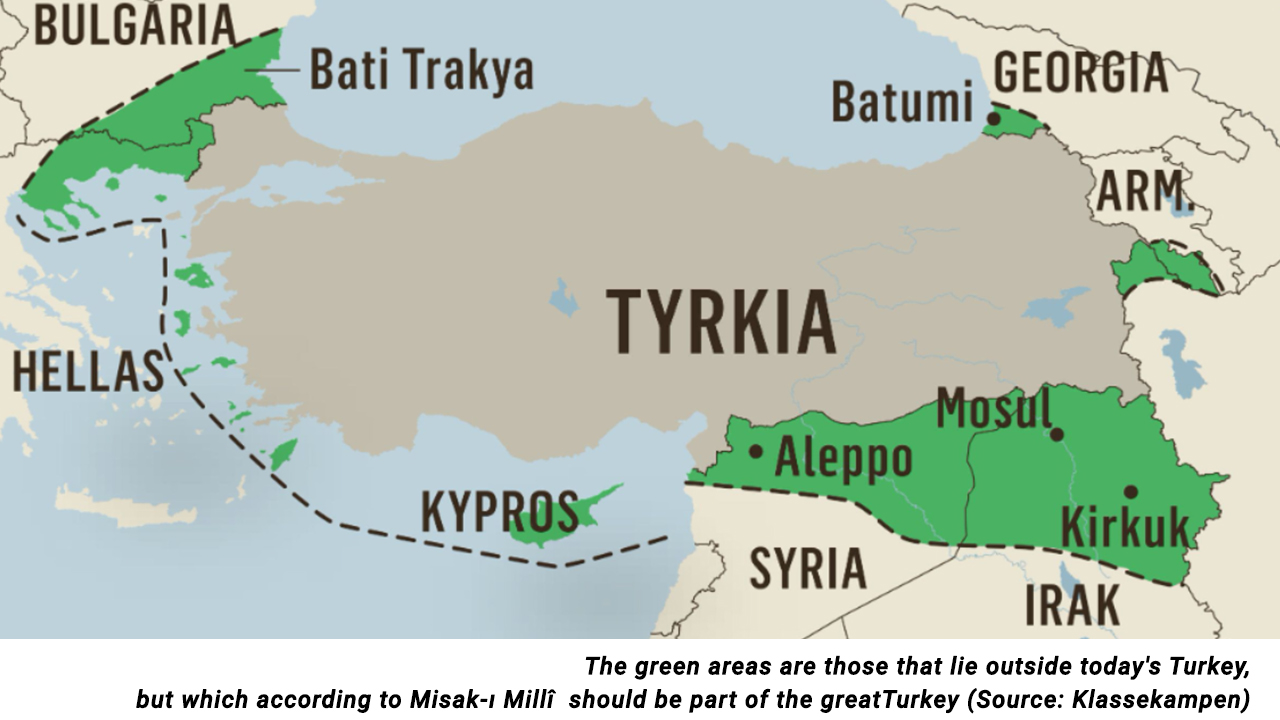 Today, Turkey has its New Turkey Strategic Research Center (Yeni Turkiye Stratejik Arastirmalar Merkezi). The name makes me think of The Project for the New American Century, a think tank created in Washington in 1997. The purpose was “to promote American global leadership.” The invasions in Afghanistan in 2001 and in Iraq in 2003 were the first sub-projects.

“It is crystal clear: WWI is not over yet”

Erdogan wrote a foreword to this book. It is titled “The key of the parenthesis that never closed: Misak-ı Millî”. This is an excerpt:

“Our country has a historic past of more than 2.200 years. There are many facts, examples of our glorious past that we should draw lessons from. (…)

“The Ottoman Parliament declared the Misak-ı Millî, the claim of the minimum of territories we could accept. The National Assembly that convened after the foundation of our Republic fully accepted this ‘National Agreement’ that added to our existing borders Mosul, Kirkuk, Aleppo, the Western Thrace, Batum, Cyprus and a few islands.

“You can understand our interest and our involvement in what happens in Syria, Egypt, Iraq, Libya, the Balkans and Caucasus by looking back at our historic past. History will give the best answer to those that say ‘what business does Turkey have in these places?’

“It is crystal clear: WWI is not over yet. We will continue the struggle and our efforts with the strength we draw from our history and our culture, against those that try to cover up the blood with blood and barbarism with barbarism. The prime condition for our struggle is not to forget Misak-ı Millî.”

This programmatic statement from 2017 is often referred to as Erdogan’s manifesto. It helps explain why President Erdoğan wants to revenge Atatürk’s humiliating defeat at the Lausanne Conference in 1923. The victors of the First World War finished dividing the Middle East when they met in Lausanne. They rejected Atatürk’s “Greater Turkey”. He had to accept that the largest imperialist states of the time – England and France – controlled the fertile and oil- and gas-rich areas of northern Syria and northern Iraq. Atatürk had to say goodbye to the Greater Turkey he had described in Misak-ı Millî three years earlier.

In October 2016, President Erdoğan spoke at The International Law Conference in Istanbul. It was on the same day that the US-led coalition forces launched the attack to liberate Mosul from IS (Islamic State). Well in advance, Erdogan had sent well-trained soldiers and tanks to the Turkish Bashica base, located just outside Mosul and about 100 kilometers from the Turkish border. Mesud Barzani, who was then both party leader and president, had given his consent to these troop movements through the Kurdish region.

Now Erdogan explained why he did not accept that Turkey was shoved aside. New Arab wrote; “Turkish President Recep Tayyip Erdogan has not let a day go by without complaining that he was not invited to the Mosul liberation party.”

New Arab reproduced excerpts from his speech under the headline: “Erdogan gives Iraq a ‘history lesson’ on Mosul”:

“Speaking at the International Law Congress in Istanbul on Monday, he invoked an early 20th century document which claimed Mosul was on Turkish soil: – In Mosul a history lies for us. If the gentlemen desire so, let them read the Misak-i Milli (National Oath) and understand what the place means to us, Erdogan declared.

“The Turkish president referred to an Ottoman parliament-sealed 1920 pact that designates Kirkuk and Mosul as parts of Turkey. ”

New Arab’s comment was brief: “Erdogan’s history lesson is likely to fall on deaf ears once more, especially now the party’s started without him.”

The next day, the Turkish Daily Sabah wrote that Erdogan assured that Turkey would participate in both the liberation of Mosul and the negotiations afterwards:

“Turkey will take part in Mosul operations and we will be at the table, Erdoğan says. The Turkish President vowed that his country would join both the Mosul operation that began in the morning and any talks regarding the Iraqi city’s fate in the aftermath of its capture from IS.

“(…) ‘They say Turkey should not enter Mosul. Come on! How do I not enter? I have a 350 kilometers (217 miles)-long border with Iraq. And I am under threat from that border,’ the Turkish President said. ‘They tell us to withdraw from Bashiqa. Nobody should expect us to do so,’ he added.”

The liberation of Mosul was another defeat for President Erdogan. The United States supported the Iraqi government, which refused to allow Turkish forces to participate. Erdogan’s tanks and well-trained soldiers could not move outside the Bashica base. Kurdistan 24 also wrote, and this is true, that “the map of the ‘National Oath’ included the islands of the northern Aegean and the Dodecanese, western Thrace and Macedonia up to Thessaloniki, Cyprus, Antioch, Aleppo, Jarablus, Der al-Zor, Mosul, Kirkuk and Sulaymaniyah.”

Three invasions after the defeat at Mosul

After the government of Baghdad and the United States had refused to allow President Erdogan to take part in the liberation of Mosul, he has carried out both three invasions in Syria and many “minor” attacks in neighboring states. The governments of Syria and Iraq have protested. They have also demanded that the Security Council address Turkish violations of international law. But they have not been heard. The Security Council appears to have adopted an informal rule where President Erdogan is exempt from following key elements of the UN Charter.

Both the United States and Russia have so far approved on beforehand or tacitly accepted the Turkish invasions of Syria and Iraq. This also applies to the latest invasion of Iraq, which started on the 17th of April 2022.

All heads of state have historical figures they look up to. And Mustafa Kemal Atatürk is not Erdogan’s only role model. In 2016, he received many questions before the referendum to change the constitution and make the president virtually the sole ruler.

At a press conference on January 1, 2016, President Erdoğan once again answered critical questions about why he wanted to change the constitution. Did he think that such a change would work well in Turkish society? Erdogan answered succinctly:

“There are already some examples in the world today, and also some from the past. You see it when you look at Hitler-Germany.”

In this way, Erdoğan himself focused on a possible similarity between his own methods and the methods used by Adolf Hitler after he had become a dictator.

So it makes good sense to look for any similarities between Hitler and Erdogan when it comes to conquering new lands. In 1938, Hitler demanded the incorporation of part of Czechoslovakia into Germany. The Heads of State of England, France and Italy accepted this. On September 30, 1938, they signed the Munich Agreement, which gave part of Czechoslovakia to Hitler. The government of Czechoslovakia was not given permission to participate in the negotiations. Hitler guaranteed that he would not demand further German expansions. 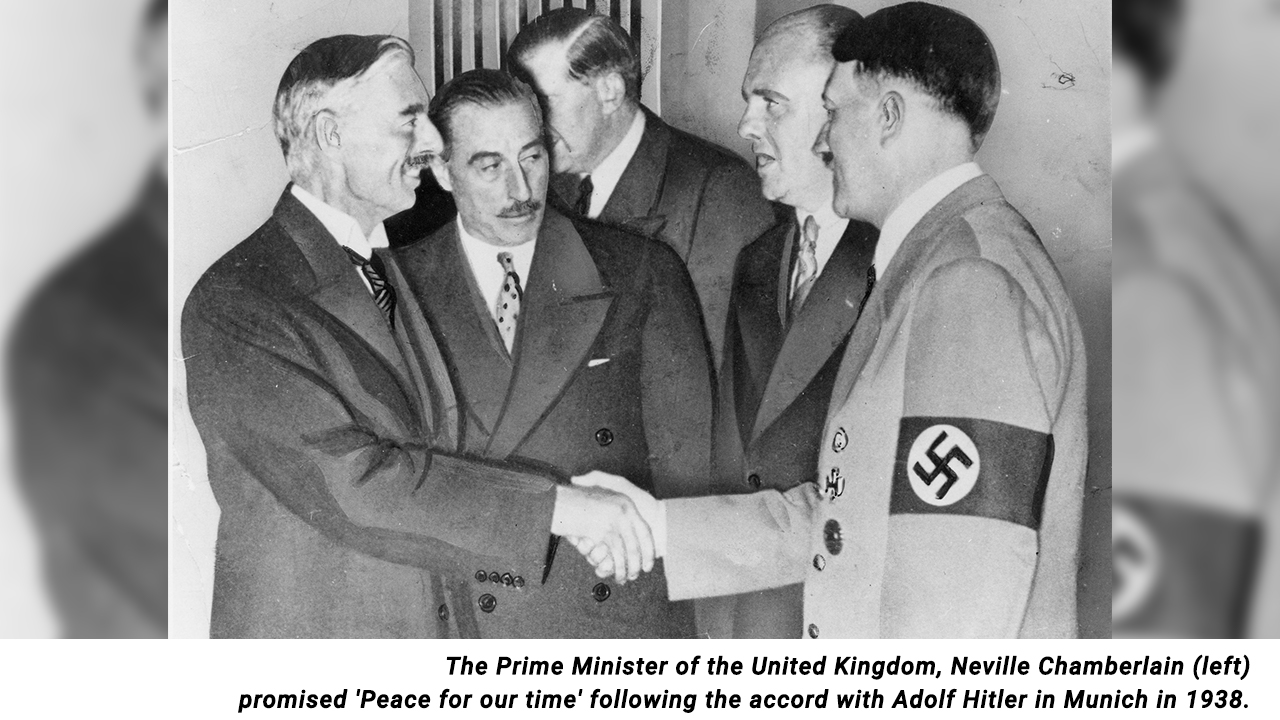 Chamberlain, the Prime Minister of the United Kingdom, declared that the agreement would ensure “Peace for our time”.

Six months later, Germany occupied the rest of Czechoslovakia. Today, everyone knows that this was the beginning of World War II.

Who can stop Erdogan?

In May 2022, it is only the PKK guerrillas in northern Iraq and the SDF (Syrian Democratic Forces) in Syria that are resisting against President Erdogan’s campaign of conquest, with NATO’s second largest army. Militarily, it’s a battle between a military giant and a tiny dwarf. Yet Turkey has failed every time when it has declared that the next invasion will “eradicate the very last PKK terrorists”.

In the autumn of 2021, President Erdogan declared that the 100th anniversary of Lausanne will be “the biggest milestone on the road to building a great and strong Turkey.” Heads of state who do not put their foot down now, will in the future be compared to those leaders who, in 1938, met Adolf Hitler with appeasement.