Two Islamic State of Iraq and Syria (ISIS) suicide bombers had consecutively attacked  ‘Labour-Peace-Democracy’ march in front of Ankara’s train station on 10 October 2015 in Turkey. Over one hundred people were killed and over five hundred were injured as a result of the attacks. Following the suicide attacks, the police had attacked people as they lay injured, rather than helping them. Five years later, the proceedings of this case continue.

Thousands of people had gathered in front of Ankara’s train station for the march, organised by the Confederation of Public Employees’ Trade Unions (KESK), the Confederation of Progressive Trade Unions of Turkey (DİSK), the Union of Chambers of Turkish Engineers and Architects (TMMOB) and the Turkish Medical Association (TTB). The march was taking place under the slogan “Urgent peace, Urgent democracy”.

The two detonations by the suicide bombers had occurred at the central point of the gathering just before the march began. The explosions occurred at 10.05am, creating mayhem. The first explosion targeted the place where mainly Peoples’ Democratic Party (HDP) members and supporters were gathering and the second targeted Labour Party (EMEP) and Socialist Youth Associations Federation (SGDF) members and supporters. After the incident, footage of the scene indicated that the bombs had been laced with marbles and jagged metal fragments.

The police attacked the injured

Following the explosions, members of the TTB and the Trade Union of Employees in Public Health and Social Services (SES) treated the injured instantly. People urgently attempted to transfer the injured to ambulances and hospitals. Even banners for the march were used as makeshift stretchers to carry the injured. After the incident, people criticized Recep Tayyip Erdoğan, the premier of Turkey, for what followed. 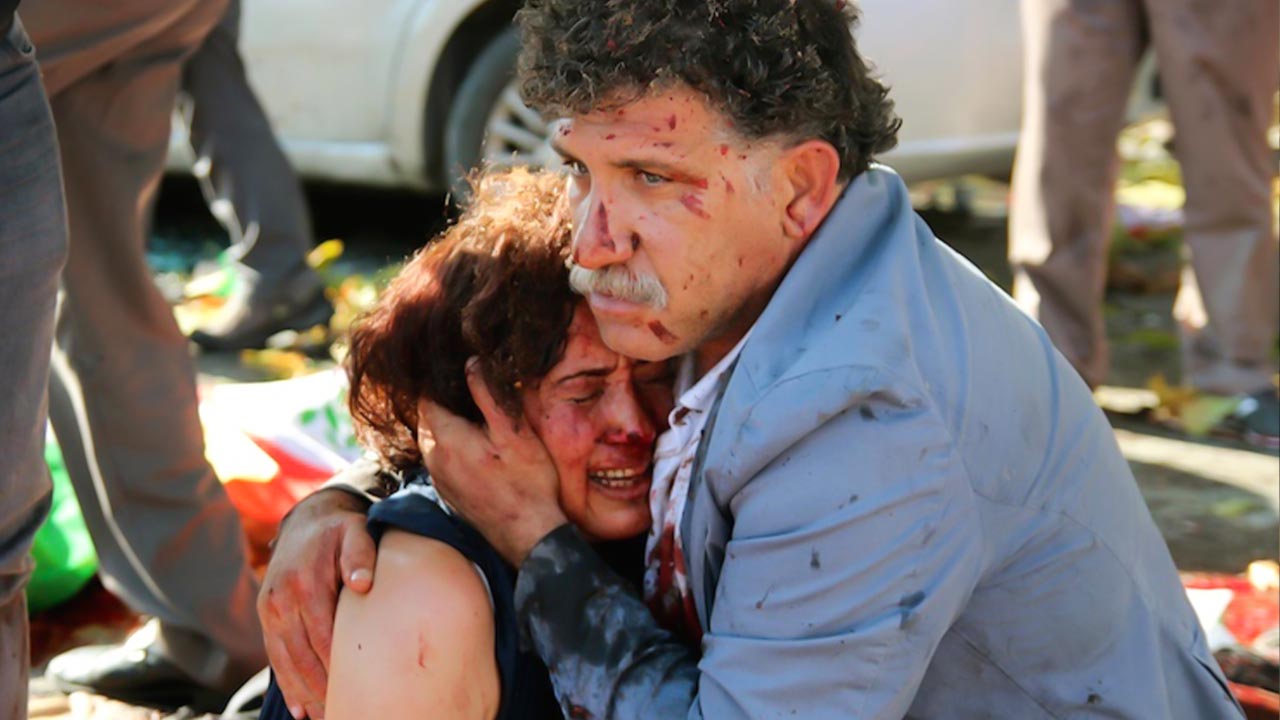 According to the TTB’s report of the incident, riot police were deployed at the scene before the ambulances arrived. They attacked people who were at the scene of the carnage and used tear gas and water cannon against them. Police also blocked the road with police vehicles so that ambulances could not reach the dead and injured at a critically important time. Later, citizens had to physically move the police vehicles to open the road to allow the ambulances access to the injured and dead.

Police tried to block Ambulances from arriving at the scene

As some police left the scene as efforts were made by deputies of the HDP and the Republican People Party (CHP) to assist the injured, it was observed that other police officers tried to block the ambulances from reaching the scene of the suicide attacks. Many people at the scene were angered by the police behaviour. The injured were transported to hospitals using private vehicles as well as ambulances (once they were able to access the scene). 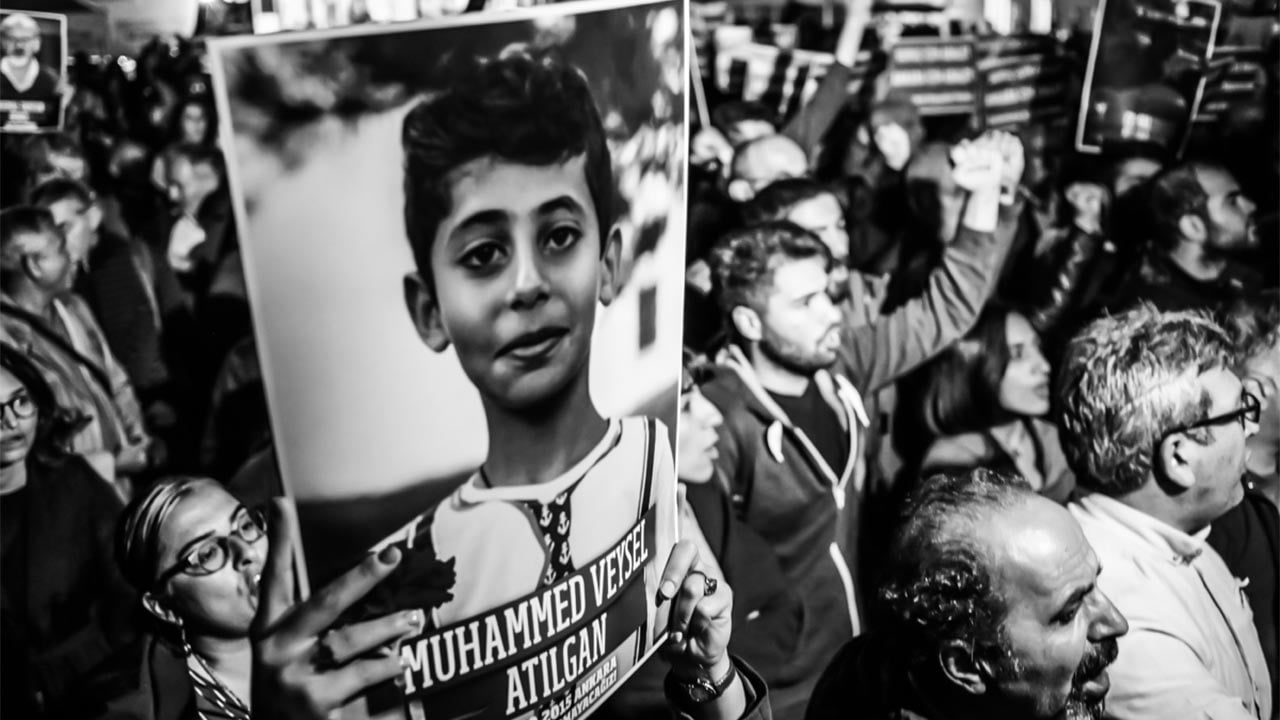 After the incident, the meeting coordination committee of the march announced that the march had been cancelled and they urged everyone to leave the vicinity due to the possibility of another suicide attack. TTB, SES and people from various health care organizations immediately established a committee at the crime scene to investigate the incident and carried out emergency actions for the injuried. The TTB confirmed that 103 people had lost their lives and over 500 were injured.

The case regarding the 10 October suicide attacks began on 7 November 2016 at Ankara Courthouse. The indictment had been prepared nine months after the incident. The prosecutor had demanded that 35 defendants, linked to the Islamic State of Iraq and Syria (ISIS), be sentenced to 101 times the aggravated life imprisonment sentence on the grounds of “attempting to destroy the constitutional order and membership of a terror organization”. However, only 15 prisoners and 4 other defendants appeared in court. It was stated that the other accused defendants could not be caught. No public officers were tried during the case. The families of the victims demand justice. After five years, no public officers who were involved in the incidents described, have been included in a lawsuit process. It was further revealed – via a report released by the National Intelligance Agency (MİT) in 2018 – that the Turkish government had prior information that some actions were planned before the suicide bombings occured.

The families of the victims and various organizations have held commemoration events every year at the place where the explosions took place. Despite the Interior Ministry’s 2 October decree banning all union and NGO public events until the end of December due to the coronavirus pandemic, the victims stated that they would hold a ceremony in front of Ankara train station at 10.04 am on 10 October.

However, police attacked the victims’ families and people who gathered this morning and detained eleven people. As police blocked people from reaching Ankara train station, the commemoration was held in another place in Ankara and the names of the victims were read out during the commemoration. 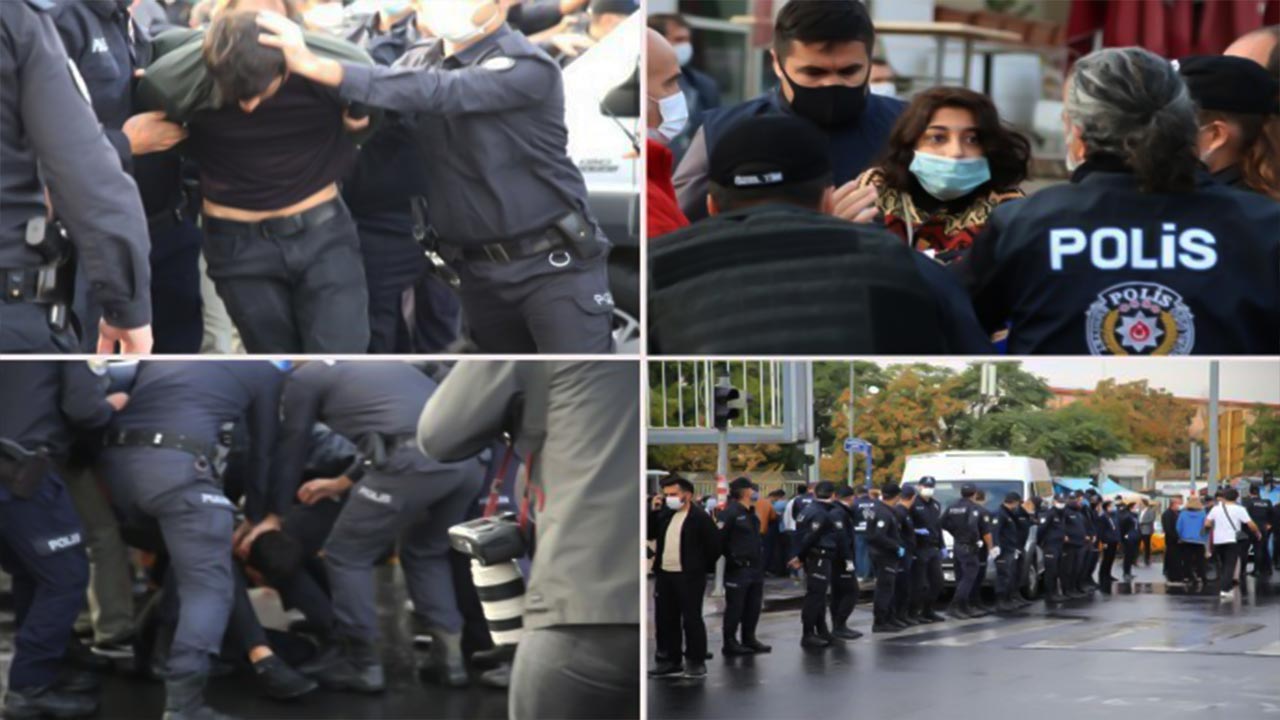 Many people lost their relatives and beloved ones during these explosions. Mustafa Doğan’s son Güney Doğan lost his life during the explosions. Mustafa said: “I promised Güney when we buried him that I will be in the square where the massacre took place, on the 10th day of each month. I will not forget your murder”.