A ‘name list’ of paramilitary fighters who were reportedly paid by Turkey and sent from Syria to Libya to fight, has been published by ANF.

Beritan Sarya from Fırat News Agency (ANF) has stated in a report that 18,000 armed men, mainly members of the Syrian National Army (SNA) which has been backed by Turkey, were sent to Libya via Turkey.

It should be noted that the UN Working Group on the use of mercenaries had also, earlier in June 2020, “expressed alarm at widespread reports about the use of mercenaries and related actors, particularly since the start of the offensive by the Libyan National Army (LNA) to seize the capital Tripoli in April 2019. ‘This is a breach of the existing arms embargo imposed by the UN Security Council which includes a prohibition on the provision of armed mercenary personnel, as well as a breach of the International Convention against the Recruitment, Use, Financing and Training of Mercenaries to which Libya is party’”, Chris Kwaja, who chaired the Working Group, had stated at the time.

The Working Group had stated that: “Reports have emerged that Turkey has engaged in large-scale recruitment and transfer of Syrian fighters to take part in hostilities in support of the Government of National Accord (GNA). ‘These fighters were recruited through armed factions affiliated with the Syrian National Army (SNA) that have been accused of serious human rights abuses in Syria’, Kwaja said. Thousands of Syrian men, including boys under 18 years, have reportedly been sent to Libya via Turkey in recent months.

“‘We are concerned that these children come from an extremely vulnerable social and economic situation and are being exploited for the purpose of recruitment as mercenaries’, he added. The experts” had also conveyed their concerns directly to the Government Turkey.

Ali Barada had also reported in July 2020 that: “A United Nations report revealed that several countries have expressed concern over the arrival of thousands of ISIS and al-Qaeda terrorists to Libya. The UN Security Council Committee concerning Libya said 7,000 – 15,000 mercenaries and terrorists from Syria have entered Libya through Turkey to fight alongside the Government of National Accord (GNA). The report found that ISIS boasts a few hundred fighters in Libya. One member state said that the number is as much as 4,000. It expressed concern over reports that 7,000 – 15,000 fighters had been transported from northwestern Syria to the capital Tripoli through Turkey. The interim Syrian government in Turkey has helped send forces to Libya, it found”.

After the UN Security Council called for foreign fighters to leave Libya, Ankara returned 1,226 mercenaries to Syria to present a message that they were complying with the UN call, reported ANF.

ANF’s report has stated that at least 12,835 mercenaries – 1,226 of whom were reportedly sent back to Syria after the UN’s call – were transported to Libya since the beginning of the civil war in Libya.

Transfer to Tripoli via Istanbul

ANF also obtained a ‘name list’ of 2,700 mercenaries, who were reportedly brought from the Afrin-Azez region into Turkey over the Hawar Kilis border and then transported to Libya via Turkey. The armed paramilitary fighters were reportedly transferred to Tripoli from Istanbul by air, according to the local sources who spoke to ANF. 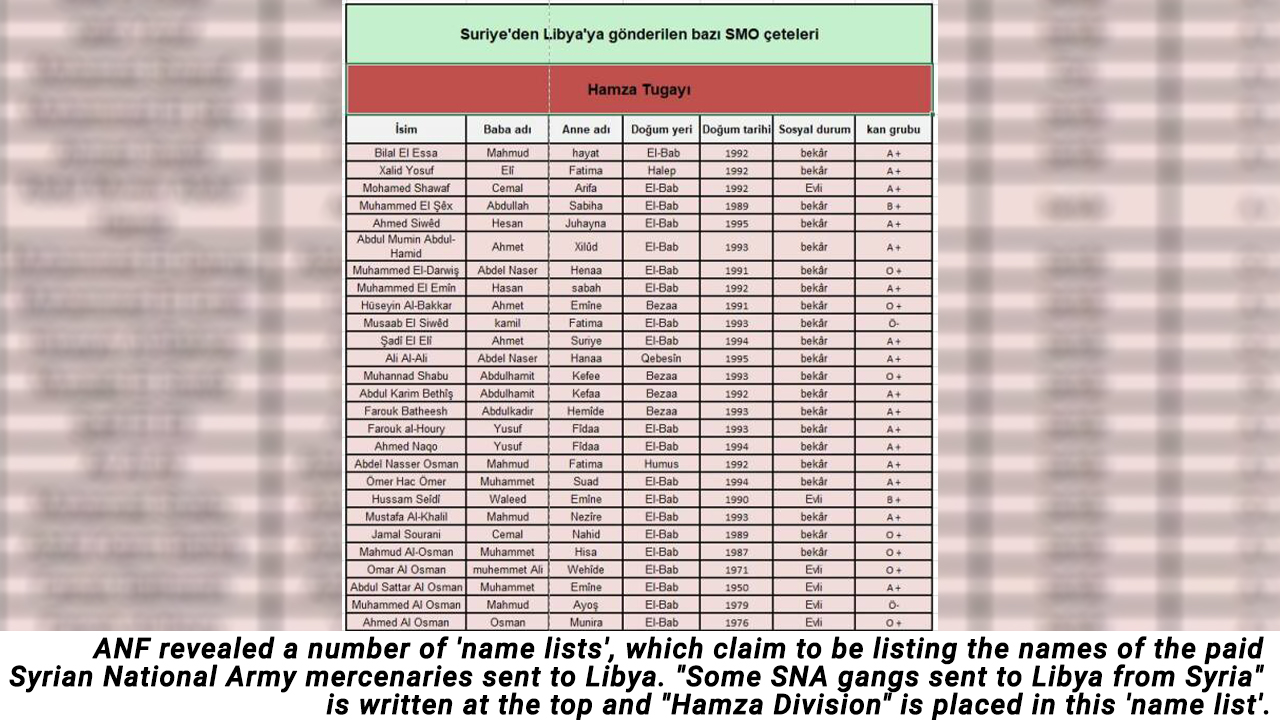 It was also reported that the mercenaries who were wounded or died in Libya, were sent back to Syria via Turkey.

“The mercenaries sent to Libya under the name of the ‘National Army’ are supposed to be paid $2,000 USD by their contracts, but Turkey generally pays half of this sum”, local sources told ANF. This reported claim, if true, suggests that Turkey pays Syrian jihadist mercenaries to fight in Libya.

Another source reportedly stated the following to ANF: “The contracts of most of the mercenaries are over. The ones who want to return to Syria are able to do that by paying a bribe of $500 USD to their commanders. Libyans hate Syrians. There are many Syrians who would like to go back to their country, but the Turkish authorities and the commanders insist on keeping Syrian armed forces in Libya”.

Among the Syrian armed groups reportedly sent to Libya are ones that are infamous for the atrocities they committed against civilians in Syria – namely, according to ANF, the Sultan Murad Division, the Hamza Division, the Süleyman Şax Divison, El Tesha and Feylew El-Mecid.

Sources speaking to ANF also shared the information that there are many former ISIS members among the SNA mercenaries who were sent to Libya. “Led by Ebu Yezqan Misri, this special group is formed by former ISIS members, who are not from Syria”, the sources told ANF.