Turkey has been ranked 6th among 193 countries in the 'state-embedded actors' in international crime list and second in the categories of 'arms trafficking' and 'human smuggling,' according to Geneva-based GI-TOC.

Turkey has been ranked 12th among 193 United Nations members in ‘organised crime,’ according to a recent report released by the Global Initiative Against Transnational Organised Crime (GI-TOC), an independent civil society organisation headquartered in Geneva, Switzerland.

While Turkey has been placed just outside the top 10 countries with an average of 6.89 in the Global Organised Crime Index 2021, it has been ranked 2nd in the whole world in both categories of ‘arms trafficking’ and ‘human smuggling,’ 6th in the ‘heroin trade,’ 6th in the category ‘state-embedded actors’ in organised crime and 11th in ‘Mafia-style groups.’

“The democratically governed countries had higher levels of resilience to criminality than authoritarian states, and state actors are the most dominant agents in facilitating illicit economies and inhibiting resilience to organised crime,” the report noted.

The Democratic Republic of Congo, Colombia, Myanmar, Mexico, Nigeria, Iran, Afghanistan, Iraq, the Central African Republic and Honduras made up the top 10 in average scores in the listing.

The GI-TOC Index placed Turkey 6th in terms of the impact of ‘state-embedded actors’ in organised crime. It was noted that “the Turkish government often leverages certain criminal markets, such as the gold and oil trade, human smuggling and arms trafficking, for its own benefit and political purpose.”

‘Turkey, a Mafia state more than ever’

“Turkey has become known as a mafia state and the evidence suggests that this is the case, now more than ever,” the report concluded.

“State-embedded individuals are thought to be involved in illegally transferring weapons to Salafi-Jihadist groups fighting in Syria and Libya, as well as providing weapons to paramilitary groups in Turkey. Organised crime and state-embedded individuals have extremely strong and complex links, dating back many decades and continuing to today. There are a significant number of mafia-style groups operating in Turkey, modelled on the traditional mafia typology, with a strong hierarchy centred on the head of the family, known as a baba.”

In the context of other countries that include parts of Kurdistan, Syria was ranked 1st and Iran 3rd in the category of state involvement in organized crime.

The report indicates that while the Turkish government has taken a public stance on organised crime, “it has been used merely as a rhetorical tool for the state’s own political purposes” as “an increasing trend towards authoritarianism by Turkish President Recep Tayyip Erdoğan reached its peak in the wake of an attempted coup in 2016.”

“Transparency and accountability are very limited and deteriorating,” it said.

“Almost all oversight mechanisms in the country are directly appointed and controlled by the government and are often used as a political tool to clamp down on dissent and political opposition. Corruption is rife across all levels of the state apparatus, due in large part to the ineffective anti-corruption agencies in the country and the inconsistent application of anti-corruption laws, all of which combine to create a culture of impunity.”

In a series of incidents supporting the report’s observations, bosses of some of the largest crime networks in Turkey have been released in recent years.

Kürşat Yılmaz, convicted on the charge of setting up and leading a crime organisation, was recently released on 30 October after he had served a prison term of 16 years and was acquitted on a number of other charges.

Alaatin Çakıcı, the biggest crime boss in Turkey according to police data, was released on 16 April 2020 after a new regulation on the execution of prison sentences was passed in the Turkish parliament, due significantly to intensive efforts that were exerted by the Natonalist Movement Party (MHP) leader Devlet Bahçeli (where the MHP forms part of the ruling coalition).

Bahçeli had said in November 2020 that Çakıcı was a comrade of his who had fought for the same cause. 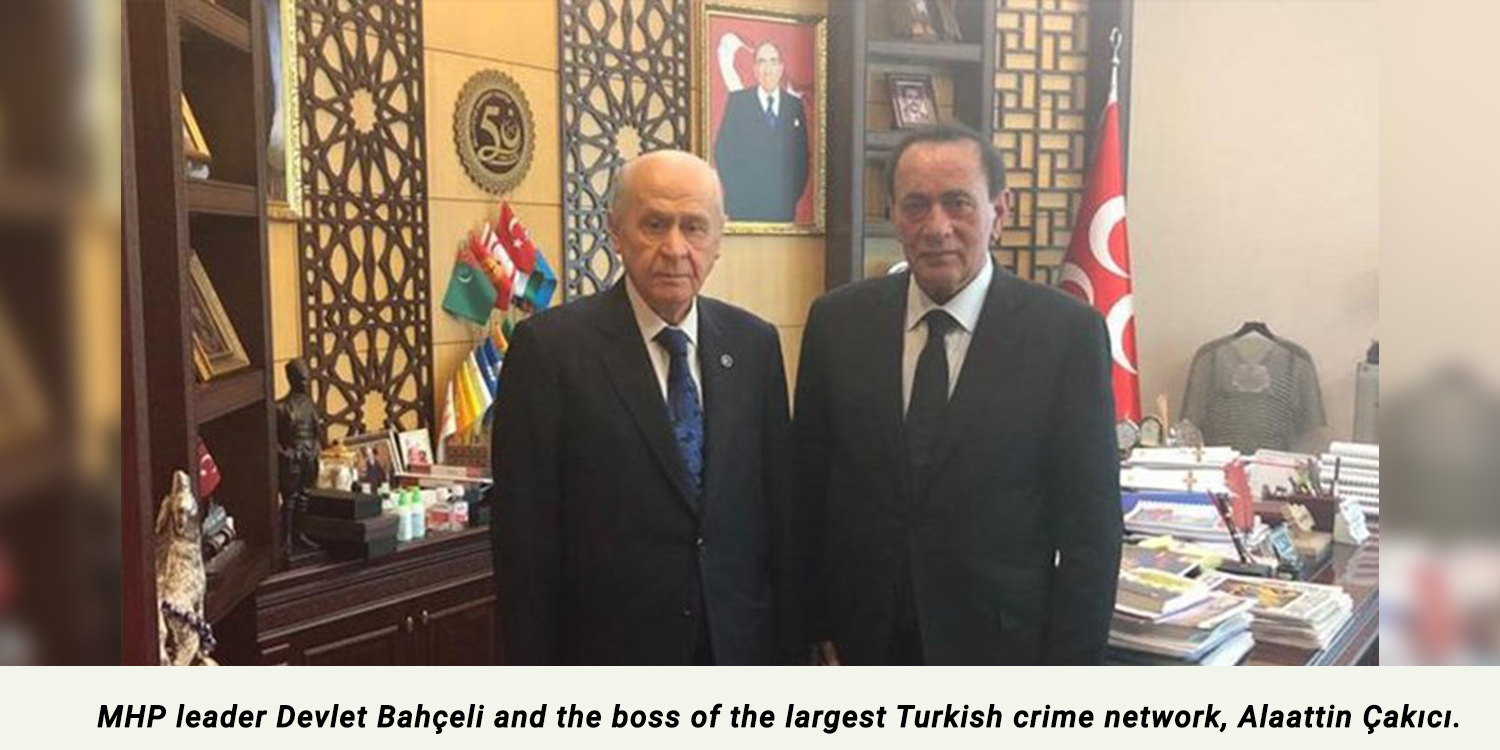 According to police data that was made public in March 2021, the network led by Çakıcı ranks first in Turkey, with 428 active members serving under him.

Sedat Peker, another network boss, had organised political demonstrations in support of the government and had donated a fleet of off-road vehicles to the Turkish military’s proxy Free Syrian Army (FSA) during Turkey’s military campaign in 2018 before he had gone ‘rogue’ in 2021, reportedly due to conflicts with rival Alaattin Çakıcı. 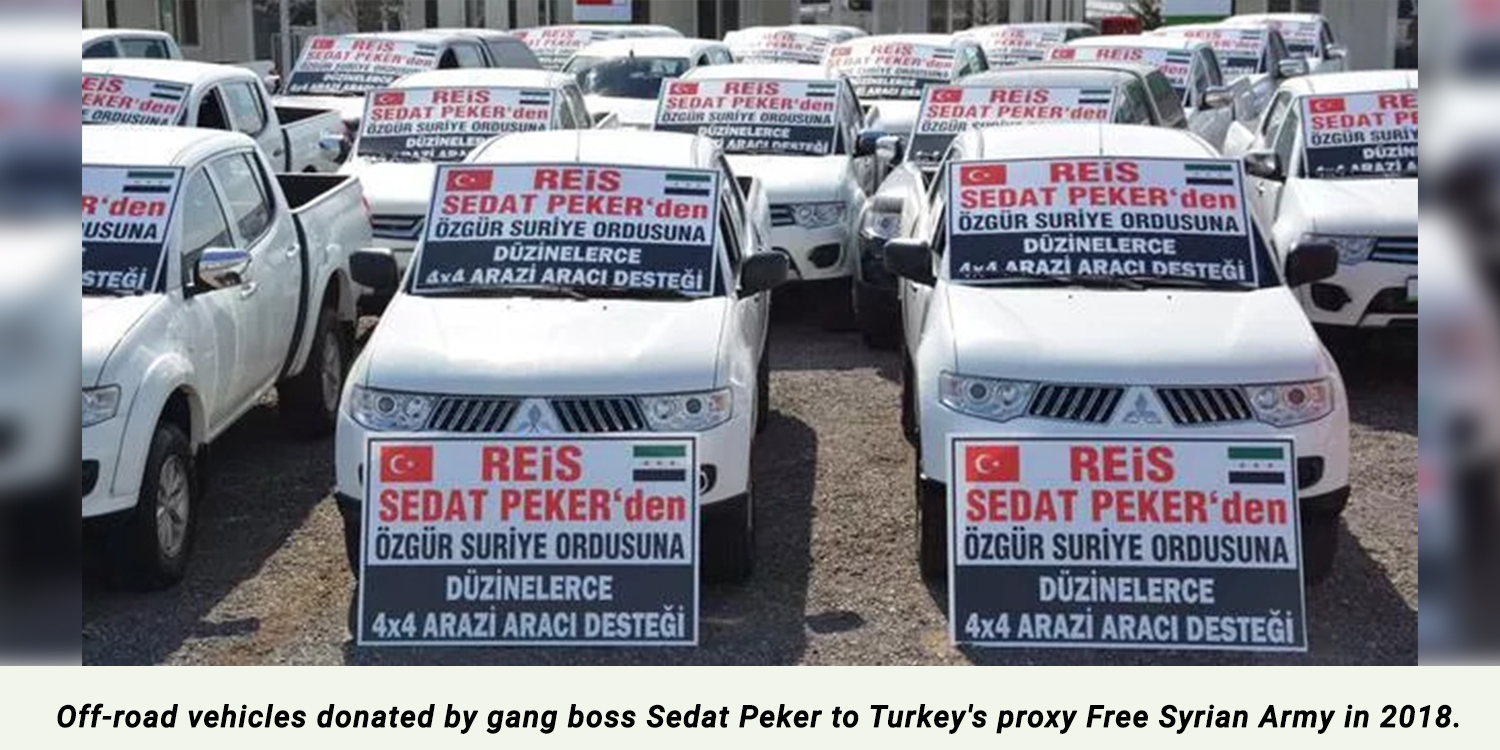 Peker had been ranked 3rd according to the police data, with 253 gang members actively serving under him.