Reports say three Syrian Kurds were forcibly kidnapped in various parts of Afrin. The suspects accused of the kidnappings are Turkish intelligence officers.

A local source on Friday informed ANHA that two civillians were abducted at a check-point in Qibar, a village in Afrin, North East Syria. The check-point is reportedly used by Turkey’s armed affiliates and the Turkish Intelligence Organisation (MIT).

Another Syrian Kurd named Xelîl Tahir Mihemed was also abducted and taken to a prison complex located in Mare`.

ANHA reported that another civillian, named Hebeş Reşîd Hebeş, aged 26, was abducted from an hospital located east of the Syrian border town of Azaz.

Mistefa had reportedly decided to go back to Afrin upon the pro Turkish, Kurdish National Council’s (ENKS) call for the locals of Afrin to return home, but his whereabouts has remained unknown since he left Aleppo. 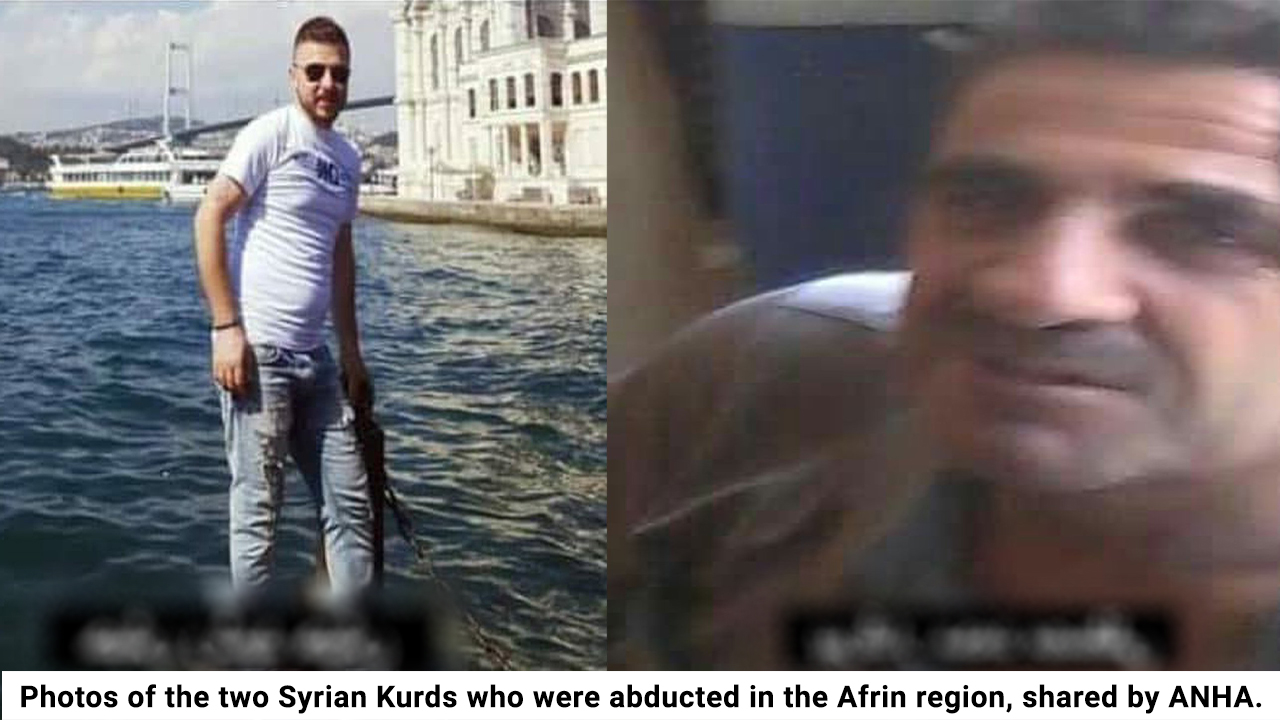 There are increasing numbers of incidents that have been reported from the Afrin region regarding the abduction of Syrian Kurds, who have been kidnapped upon their return to Afrin.

The most recent of these reports were announced by the Syrian Observatory for Human Rights (SOHR). SOHR activists reported that last week members of the Turkish-backed al-Hamza Division kidnapped a woman from Afrin on 12 September and another Syrian Kurd from Kerzayhel village in Shirawa district in Afrin countryside, who was beaten and arrested by Ahrar al-Sham, after he returned to his village 20 days ago.

Local sources told the Afrin Post that the Turkish-backed forces on 8 September raided the home of the 32-year-old man and took him to an unknown address.

In January 2018 Turkey launched a military operation in Efrin and has been controlling the region ever since.

From the very beginning of the invasion and occupation of Afrin, an open campaign of ethnic cleansing targeting the Kurdish people, the Yazidi people, especially women and girls and the other peoples who had lived and co-existed peacefully and safely in Afrin under the Autonomous Administration since 2021 was launched by Turkey and their proxy forces, Meghan Boddette, an independent researcher and founder of the “Missing Afrin Women Project” previously told Medya News.

Many Kurdish civilians in the region have reportedly been subjected to severe mistreatment, torture and acts of barbarism by Turkey’s proxies as many reports of horrendous and cruel attacks on civilians, kidnappings and disappearances of civilians and war crimes targeting women have been continuously reported from the city of Afrin and surrounding areas.