The Migration Monitoring association’s study of the forced migration of women from Turkey’s provinces of Diyarbakır (Amed), Şırnak (Şırnex), Mardin (Merdin), and Hakkari (Colemerg) between the years 2015-2016 sheds light on the migration experiences of women and reveal the undocumented archives of memory, Yeni Yaşam reports.

480 women were interviewed for the research project entitled, The violation of rights and experiences of women during the curfews and forced migration process”. Some of the interviews conducted as part of this research in Sur, Cizre, Şırnak, Yüksekova, Nusaybin and Van were included in the book “Migration Stories of Women”.

Mirjana Morokvasic assessed critically in her article entitled “Birds of Passage” in 1984, the lack of gender studies in the mainstream production of knowledge on migration. Women’s experiences had been largely ignored in studies of international migration. “Migration Stories of Women” is a very meaningful step taken in Turkey within this regard, as it focuses on the invisible victims of forced migration and shows the women’s perspective on war and displacement.

According to the research, 500,000 people were displaced and 1,000,809 people were indirectly affected as their fundamental rights and freedoms were violated in this process; such as health, education and security. Mainly women and children have become the victims of the forced displacement.

Another important issue discovered was that women experienced forced migration for the second time, after the evacuation of villages in the 1990s.

98% percent of the women participated in the study stated that their mother tongue is Kurdish, and 28% percent did not know Turkish.

Multiple displacement over the years

Also according to the research, a large part of the population who experienced curfews and migration were also forced to migrate due to village evacuations/burnings since the second half of the 1980s.

37% percent of the women had also been subjected to forcible migration before 2015, and 84% percent of them had to migrate as a result of the village burning/evacuation and village guard imposition in the 1990s.

“Our house has been demolished three times, we had to leave our village first in 1992. We left behind our house and all the belongings. First we went to Silopi, then to Cizre, then to Kumçatı. We migrated 4-5 times,” said a 58-year old woman from Şırnak province.

“During the village evacuations in the 90s, they bombed and burned our house, we were afraid and we escaped to Syria. Our house was also burned in Syria, so we returned to Turkey. It was very, very difficult. Here, too, the house was destroyed. Nobody saw what we have been going through,” said a 36-year-old woman from Mardin’s Nusaybin (Nisebin) district.

‘Get out you Armenians or we will burn you’

31% percent of the interlocutors had to leave their places due to the direct threat of life after evacuating their villages; as a result of the curfews and the pressure of security forces.

”We didn’t leave the house. My parents and our neighbours stayed in the basement, We lived in this situation for almost two months, I was mentally depressed. We did not have enough water and food. We were full of rage. We were not even able to contact with our neighbours. We did not know who was dead or alive. We heard the announcements: “Get out you Armenians or we will burn you.” 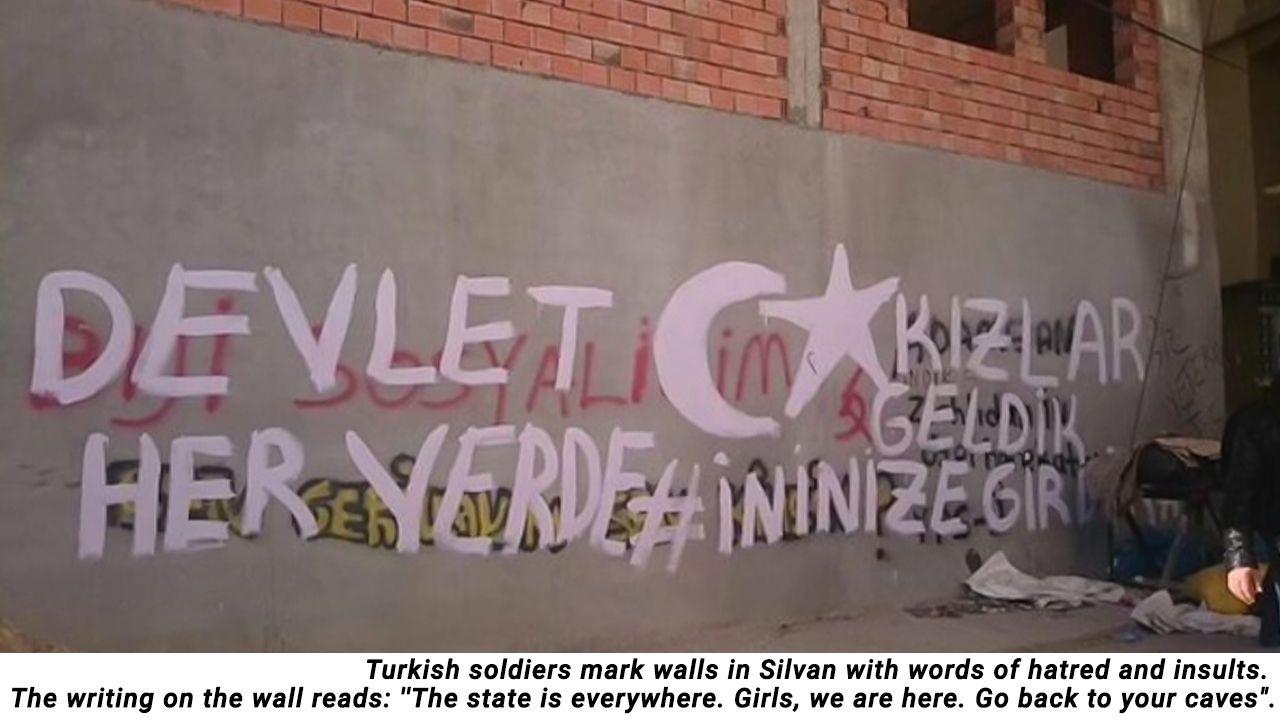 During the curfews, women said how they were subjected to harassment and human rights violations. However, one of the important points is that a significant majority of the women responded to the questions with silence.

”I have no strength to talk about those days, I have nothing left. I am totally devastated. I watched my child eat nothing for three days, I had a miscarriage, these are the simple examples. I remember we cried just because of thirst. As if bombs or bullets were not enough, we were also subjected to verbal harassment,” said a woman from Cizre (Cizîr) district of Şırnak province.

‘The soldiers were stealing the underwear of women’

”I don’t want to talk about it, but I remember the soldiers were stealing the underwear of women, it was very ugly, they wrote on the walls, saying ”Wait for us Kurdish girls, we are almost there’,” said a 43-year-old woman from the Sur district of Diyarbakır province.

According to the report, 75% of the participants stated that they experienced psychological violence during and after the curfews; and most of them had difficulty sleeping.

”We did not leave the house during the curfew. We stayed in the basement for three months. We were seven families, we were all starving and had no water. A lot of people were injured. We could not go to the hospital, we could not buy medicine, we could not go out,” a 35-year-old woman from the Cizre district said.

”When we had to leave Cizre with my children, we were targeted by the soldiers and fired upon. We were running, two people fell to the ground, I don’t know whether they died or not, I couldn’t look back. Later, I could not forget that moment. I was thinking about Cizre once whild combing my hair, I said to myself at that very moment, how could you leave them! Then I cut off all my hair,” said another woman from the Cizre district.

”We were locked in the basement for weeks. Bombs and gunshots were constantly coming from the outside. We had psyhological problems. My uncle beat women, the women beat the children, and the children broke their toys,” said a 23-year-old woman from Cizre reveling how the domestic violence also increased as a result of the state violence in Cizre.

‘They didn’t let us bury our son’

One of the most painful of rights violated severely during the process was the right to mourning and burial. During this period, many families were not allowed to bury their relatives dead bodies for a long time, and some could not even reach their bodies that often laid out on the streets for days on end.

“We came to Cizre to bury our son in the cemetery, but they did not allow it. They put a gun in my face and screamed ‘Don’t move, don’t move!’ I could not even touch my son’s deceased body. I just started to cry. They surrounded the cemetery all around, and did not allow anyone to come to the funeral. I still believe that my son will appear at the door,” said a 60-year-old woman from Cizre.

According to the report, the economic difficulties and insecurity also rose to a great extent after the forced displacement. 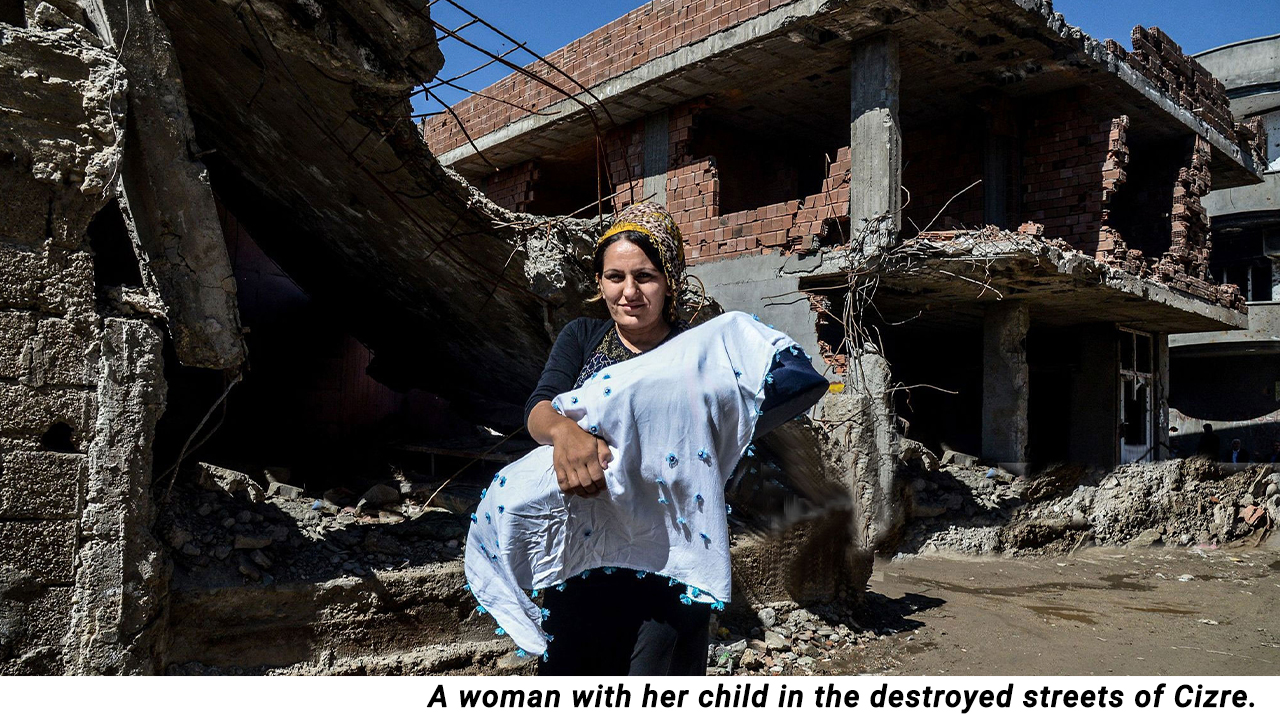 ”No help, we don’t have a municipality anymore, a new trustee has been appointed to the municipality and nobody helps us. We are in dire and desperate need. I want to go back to my old neighborhood. My neighborhood should be safe now,” she added.

”Lots of people killed themselves afterwards’

The Migration Monitoring association also emphasized in the report that after the harsh process that they have been through, women of the region suffered from great psychological problems and that cases of suicide increased.

Problems such as not being able to bond with children or excessive attachment, sexual problems, inability to carry out activities alone, decreased sense of trust, and an inability to communicate are among the problems that the women shared during the interviews.

Some excerpts from the women’s stories shared in the report are as follows:

”I am at a dark place in this world, I cannot walk anywhere, nor communicate with people. When I go out on the street, there are memories everywhere; where they sat, where they laughed, where they held a wedding. So I hate myself, I still say to myslef, why am I still alive. Being dead is better than living like this. I had psychological problems and refused treatment. They forced me to see a doctor, they gave me medicine, and I burned all the medicine when I got home. I don’t know what I am going to do now. I look at the world as if some people do not know what happened.” (Cizre-age 44)

”I stayed at home during the blockade process. I was insistant that I would not go, I will not leave this place. I said that my land is my honour, I will resist to the end and I will celebrate the victory of my resistance. The attack was so violent that sometimes we bit our hands, we put cotton in our ears. We were singing loudly and shuffling trying so that our children would not be affected. I feel uncomfortable sharing my pain, because I believe this would be unfair to all those freedom fighters who lost their lives defending our lands.” (Cizre-age 67)

” One of our neighbors, a bride who recently got married killed herself. Her psychology was so low. She hung herself. But I know she is not the only one. Lots of people killed themselves after the curfews.” (Yüksekova-age 80)

”My wife and I stayed in the basement of our home, voices were coming from outside. We couldn’t go anywhere. We just stood there for days. Then our food ran out. We didn’t have any water. I couldn’t go out. The whole place echoed with the sounds of darkness and bombs. Then, I finally managed to get to our neighbor’s house. They also had little water, they gave half of theirs to me. My wife was crying. I gave a little water to her mouth. I wanted to die at that moment. ” (Cizre-age 52)

More that 500 thousand people were displaced during the curfews in the Kurdish majority provinces of Turkey, mainly in the eastern and southeastern Turkey between the years of 2015 and 2016.

1,000,809 people were indirectly affected. The curfew declared in 11 provinces in total (Diyarbakır, Mardin, Hakkari, Şırnak, Bitlis, Muş, Bingöl, Dersim, Batman, Elazığ, Siirt). In this process, approx 3,638 people died due to the conflict, according to estimated figures.