Neşe Toprak paints the Kurdish women’s struggle: ‘I wanted to illustrate hope amid the darkness’

Kurdish painter says the struggle of imprisoned Kurdish women during the Covid-19 pandemic was the inspiration for her latest work exhibited in Istanbul: "Stuck in a small area, they have struggled for survival, twice. I wanted to remember them and remind people of them."

Launched just before 25 November, the International Day for the Elimination of Violence against Women, the Women’s Time Association in Istanbul hosted the opening of the exhibition “Woman’s Memory in the Time of Woman” on Saturday, according to Jin News.

Hosting the work of female artists, Neşe Toprak, Leyla Güç and Senan Doğan Dağdeviren, the exhibition displays a visual collective memory with the artists works illustrating violence against Kurdish women, the struggle of women in Turkey’s prisons against the injustices in prisons, and the state violence in southeastern Turkey during the curfews and prison hunger strikes.

“Women’s Time Association has invited us here for exhibiting our work. We have very happily accepted this invitation, because we try to give voice to our problems everywhere,” Neşe Toprak said.

Visitors can see the artwork depicting the stories of many Kurdish women, including Gülistan Doku, a young Kurdish woman, who has been missing for more than 600 days and Deniz Poyraz, a Kurdish woman who was a member and a worker of the Peoples’ Democratic Party (HDP) who was killed in June by a far-right gunman who raided the party building in early in the morning.

“I have covered imprisoned women, because hunger strikes in prison have topped our agenda for a while and there is the global Coronavirus crisis, which has affected these women most,” she said.

“Because they have nowhere else to go. Stuck in a small area, they have struggled for survival, twice. I wanted to remember them and remind people of them. If we are artists, we cannot ignore these issues.” 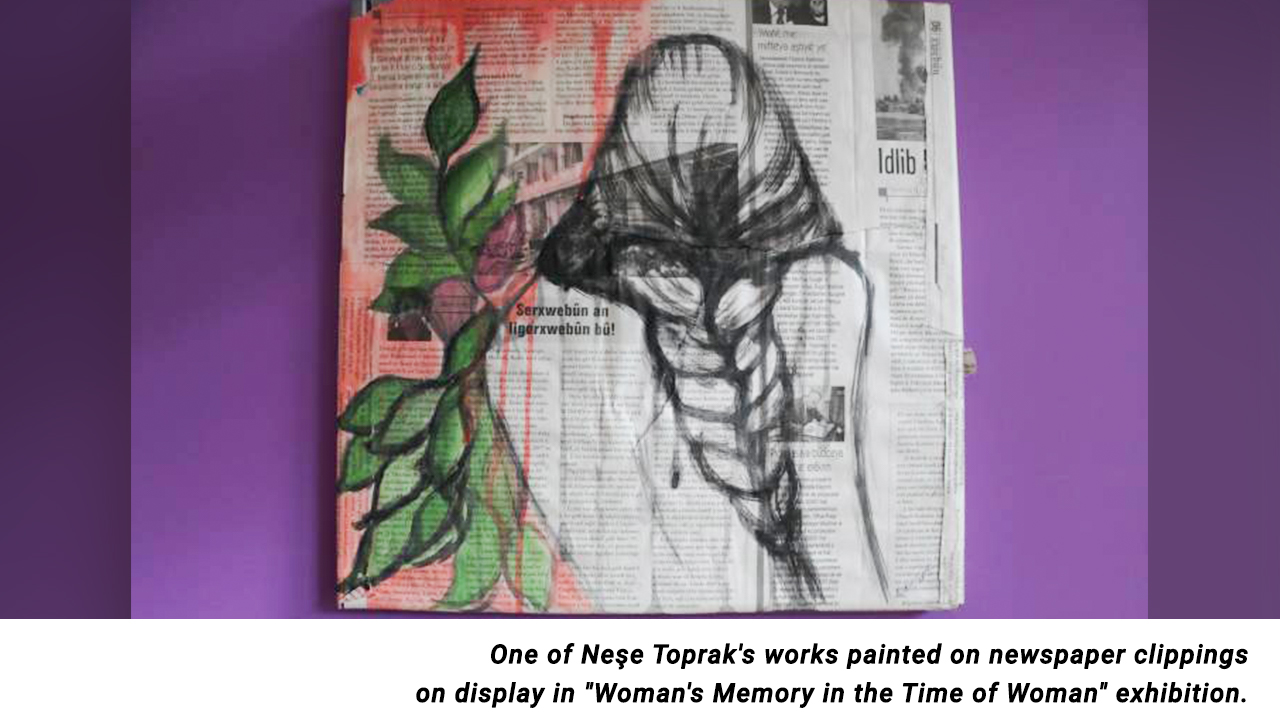 Many works painted on canvas can be seen in the exhibition, but Neşe’s works are not among them, because she paints on newspaper clippings.

“These are not random pages from random newspapers. These are the pages of our own newspapers,” she explained, referring to the daily Yeni Yaşam and the daily Xwebûn, which is published in Kurdish.

Women’s voices are missing from the main stream media and from main stream TV channels, Neşe emphasised. “Especially when you are a Kurd, a woman and have a political stance.”

“That is why we hear such news only from our own media and why I used newspaper clippings from the articles published in our media.”

Neşe says she likes to use bright colours red, orange and blue in her works, in order to illustrate the “hope” that she finds in the Kurdish women’s and people’s struggle.

“Blue red and orange, these bright colours represent hope to me and since I wanted to illustrate the hope amid darkness, I use these colours,” she said.

“No matter that there are quite a lot of hardships, Kurdish women stand strong,” she concluded, “Even stronger in prison. Yes, we pass through a very dark period, but there is also this very strong stance.”

“Kurdish people have always had and will always have this hopeful stance. I wanted to illustrate that.”