Mother calls on everyone to campaign for Nudem Durak’s freedom

Hatice Durak calls for everyone, including foreign state officials, to urge the Turkish administration to release her daughter, jailed since 2015 for performing Kurdish songs that contained political content.

The mother of Kurdish musician Nudem Durak, who’s been incarcerated since 2015, calls all artists, musicians, and officials of foreign states, to urge the Turkish authorities to release her daughter, who is suffering from serious health conditions including goitre and osteolysis.

Speaking to Jin News, Hatice Durak said that the only crime Nudem Durak committed was to sing in her mother tongue, Kurdish, and to sing Kurdish songs.

“That’s all. She was jailed just because of her work,” she said. “She didn’t do anything wrong, didn’t break any rules. She was just singing, and actually not only Kurdish, but sometimes Turkish songs as well.”

Adding that her daughter’s health deteriorated after she was jailed, the mother said that she was currently suffering from goitre, a weakening of her bones due to osteolysis, and a short sight.

“They’re under so much oppression in their prison cells. They don’t want to let us know what they’ve been facing because of their pride, but we know about it all the same. Just knowing that their cells are raided by the guards every single day and searched thoroughly each time! They poke their fingers into any objects, books, notes, anything they want. They try to intimidate the prisoners and disturb them any way they can. She once even told me that they’re not able to sleep at night because of these raids.” 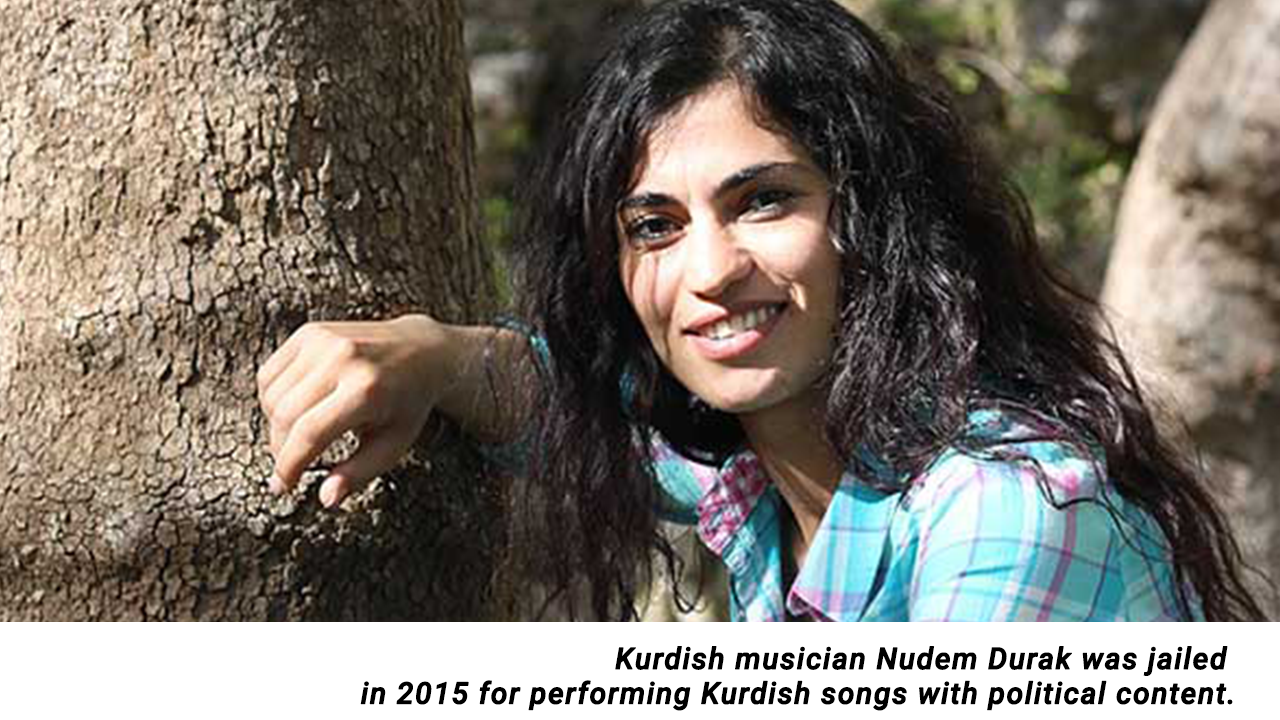 She expressed her gratitude for the international solidarity campaign that many intellectuals, musicians, actors and politicians from various countries supported.

“There is an international solidarity campaign for her freedom. Very distinguished people support her and call on Erdoğan [the Turkish president Recep Tayyip Erdoğan] to release her. If some states had called on Erdoğan for their jailed citizens to be released, Erdoğan would have released them even if these people had committed murder, even if they’d killed a police officer. But he is deaf to the calls for my daughter. He should have her released. She is very young and innocent.”

“I very much appreciate and send my respectful gratitude to all those people who have made calls for Nudem’s freedom. I kindly ask all artists, musicians, prominent people, and the states to urge the Turkish government to release Nudem from prison.”

Everyone can express their feelings about the situation surrounding Nudem Durak on Twitter under the hashtag #FreeNudemDurak.