Güney deeply affected people with his films, novels and work and still lives in the hearts of the people.

He was born in 1937 in Yenice district of Adana province of Turkey. His parents were seasonal cotton field laborers. After studying law and economics at university, Güney dropped out and started working in the film sector when he was 21.

Güney first appeared in front of the camera in 1959 in the movie “Children of this country”. During the era in the 1960s when filmmakers were producing movies about gangs of Istanbul and street fights and nightclub life, he acted in various films and was nicknamed “The Ugly King”. He often acted as “the brave and just” young man who resisted the authorities as well as gang life and corruption in Istanbul. He also came to represent the symbol of the “proud Anatolian young man who is oppressed and belittled” in those movies.

Güney sat in the director’s chair for the first time in the movie “At Avrat Silah ” (Horse, Woman and Gun) in 1966. In 1968 with the movie “Seyit Han”, in which he worked as an actor, producer, director, and scriptwriter he received the “Best Actor” award. Later, he received the Best Film award at the Antalya Golden Orange Film Festival in 1970 with the movie “an Ugly Man.” 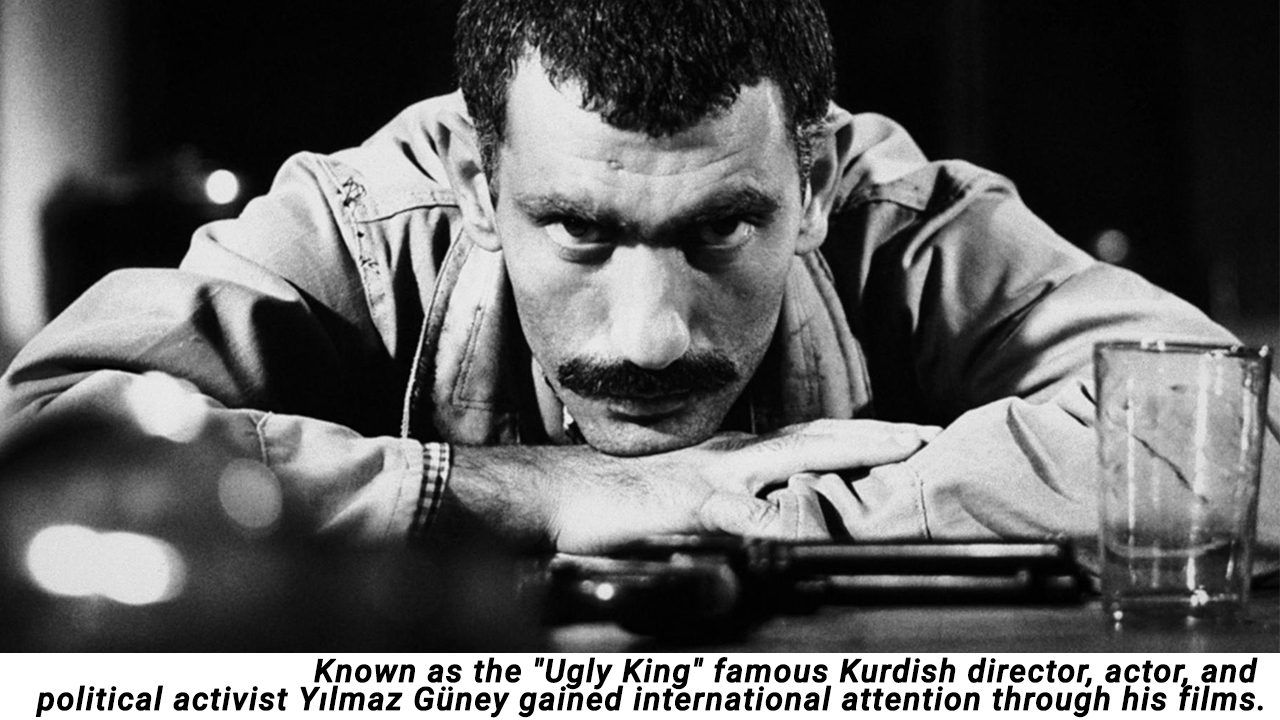 In life, Yılmaz Güney was a revolutionary artist and believed in social change. He began to make movies about villages in Kurdistan, life in the mountains, prisons, street children, and working-class people’s lives. His movies began to project the voices of oppressed people in society, detrimentally affected by the actions of authorities in Turkey.

Besides his acting and directing career he was also a passionate writer. He wrote many articles and stories in magazines as well as some books. He was prosecuted many times for his writings which started from a very young age. In 1955, when he was a university student in Istanbul, an investigation was opened against him because of his article “Inequality systems with 3 unknowns”. He was sentenced to 18 months and 6 months of exile for making ‘communist propaganda’ because of this article.

His novel Boynu Bükük Öldüler (They Died in Destitute) was published by Dost Publications in 1971 and won the Orhan Kemal Novel Prize in 1972. He was then sent to prison for being a “threat” for Turkey in 1972 because of his art. He wrote three more novels named Salpa, Hücrem ve Sanık (Salpa, My Cell, and Defendant). His latest novel was entitled “Soba, Pencere Camı ve İki Ekmek İstiyoruz (We Want Stove, Window Glass, and Two Breads). All of them were written during his prison years. 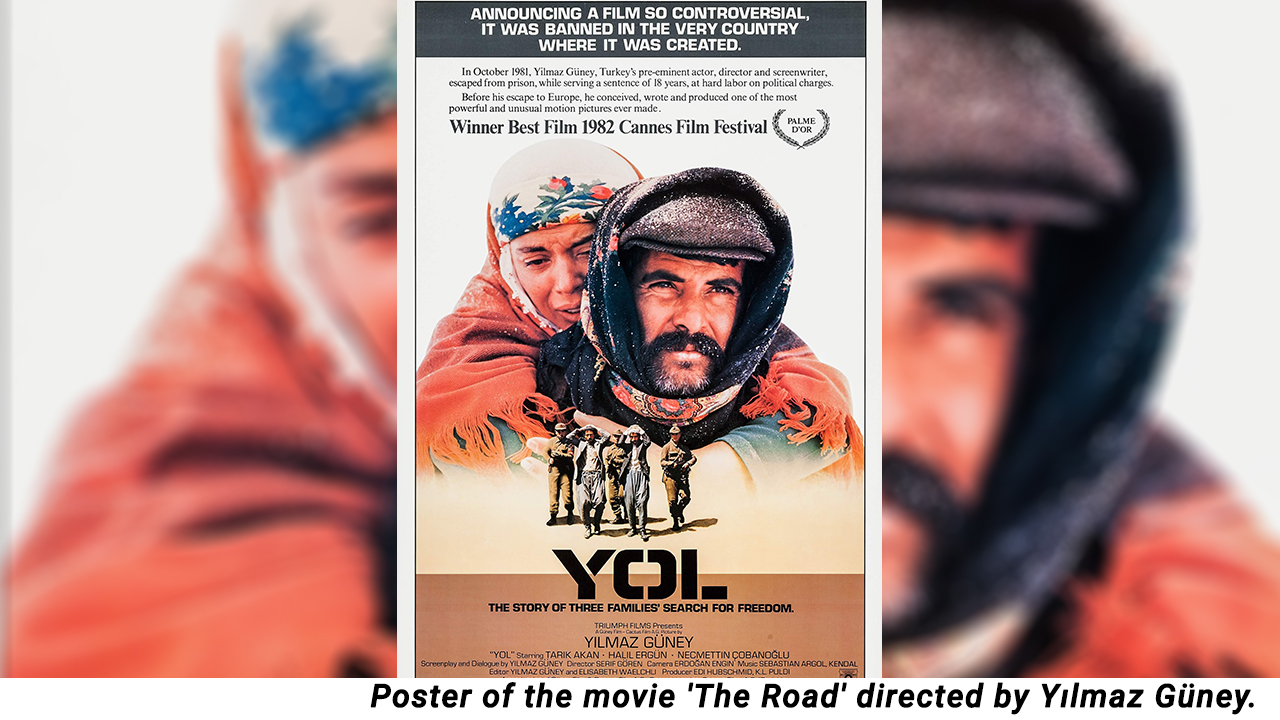 The movie “Sürü ” (The Herd), which Güney wrote the script for while he was in prison, was screened by director Zeki Ökten and became very famous. He also won the Palme d’Or in 1982 with his film “Yol (The Road)” which he co-produced with Serif Goren, another important director from Turkey. He again wrote the script of that movie while he was in prison. Since the movie points out the injustices that took place in Turkey, the Kurdish question, and the September 12 coup d’état, the screening of it was banned until 1999 in Turkey. 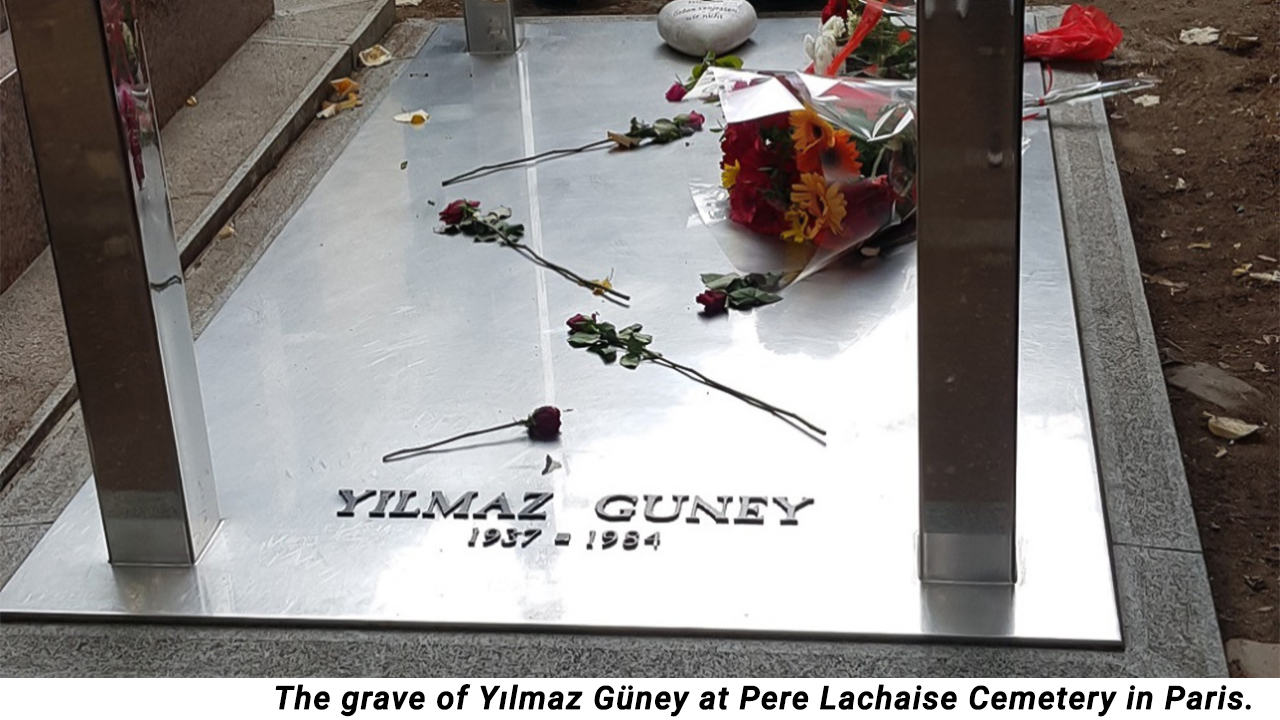 Yılmaz Güney’s works were banned by the new military junta and he was given a prison sentence of nineteen years for allegedly shooting a prosecutor but after five years he escaped prison and fled to France in 1981. He always declared that he was innocent of the crime he had been sentenced for.

Yılmaz Güney died of cancer on 9 September 1984 in Paris, France. He was buried at the Pere Lachaise Cemetery in Paris.