Kurdistan – in the shadow of Ukraine

On March 29, the spotlight of the global media once again centred on Dolmabahçe Palace. Delegations from Ukraine and Russia met in the palace that was formerly the summer residence of the founder of Turkey, Mustafa Kemal Atatürk. It was also here that he lived his last days in November 1938.

Erdoğan stopped the peace process in 2015

This is not the first time that peace has been negotiated in this building. Seven years ago, other peace talks were concluded in the Dolmabahçe Palace. At a press conference, Deputy Prime Minister Yalçın Akdoğan announced the outcome of lengthy talks between the government and a delegation from the HDP (People’s Democratic Party). The HDP negotiators had visited Abdullah Öcalan at the Imrali prison the day before. On the 28th of February 2015, Deputy Prime Minister Akdoğan told Turkish TV viewers that “we have reached an important stage in the peace process”.

The pictures of smiling negotiators shaking hands with each other signaled that something historic had happened. But the process was stopped. Recep Tayyip Erdoğan intervened. He was the president. But at that time, the president had no political power in Turkey. He had a formal, almost symbolic role. Power lay with the government and the parliament. But Erdoğan did not respect the constitution. He swept the government aside and stopped the entire peace process.

In the media, President Erdoğan is now emerging as the initiator who wants to end the war in Ukraine. The new peace-broker giving the world hope has firm support from Israel.

This “peace alliance” is natural. Israel has, at least since the 1990s, been a reliable ally and arms supplier for Turkey’s war against the PKK. Thus, the Turkish-Israeli cooperation against the Kurds in Turkey began before Erdoğan became prime minister in 2003 and later became president. And Israel has not broken off cooperation, even though Erdoğan has been striving for years to become a leader for Muslims throughout the Middle East.

Israel and Turkey – a natural alliance

Amnesty International, that recently completed a study on the state of Israel’s treatment of the Palestinians, summarizes:

“Amnesty International has specifically examined the inhumane acts of forcible transfer, administrative detention and torture, unlawful killings and serious injuries, and the denial of basic freedoms or persecution committed against the Palestinian population in Israel and the OPT [Occupied Palestinian Territory]. The organization has concluded that the patterns of proscribed acts perpetrated by Israel form part of a systematic as well as widespread attack directed against the Palestinian population, and that the inhuman or inhumane acts committed within the context of this attack have been committed with the intention to maintain this system and amount to the crime against humanity of apartheid under both the Apartheid Convention and the Rome Statute.”

Human Rights Watch and the Israeli human rights organization B’Tselem have in 2021 and 2022 also said that Israel practices apartheid.

If you summarize all rulings against Turkey by The European Court of Human Rights (ECHR), you will find similar descriptions. The main difference is that the ECHR does not use the word apartheid. Israel, which has occupied Palestinian soil since 1948, also holds a world record for violating legally binding UN Security Council resolutions.

And now the heads of state in Israel and Turkey are acting almost on behalf of the world community. They have appointed themselves peace mediators between the occupying power Russia and the partially occupied Ukraine.

If we only look at the last six years, Turkey has waged war in violation of international law in the neighboring states of Syria and Iraq. In Syria, Turkey now occupies land along half of the border between the two states. On a daily basis, Turkey or Turkey’s mercenaries also attack civilians in towns and villages outside the occupied territories. Many of these attacks are war crimes as defined in Article 8 of the Rome Statute of the International Criminal Court. The statutes state that it is a war crime when a warring party “intentionally attacks the civilian population as such or civilian individuals who do not directly participate in the hostilities.” In August 2021, I met with some of the survivors after such an attack about 900 meters outside the Turkish-occupied area in Syria. 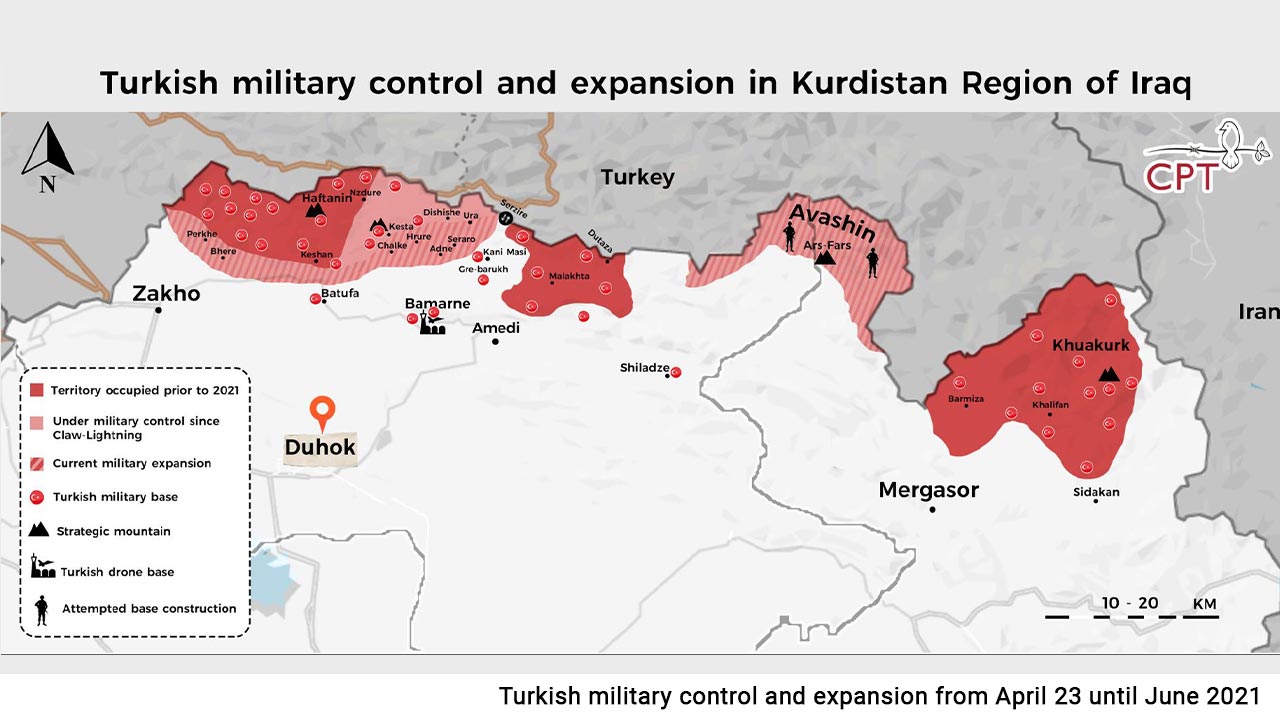 Turkey’s war in northern Iraq has a similar character. Turkey has for several years occupied some areas along the state border. On April 23, 2021, President Erdoğan launched a new offensive to expand the occupied territories. [See the map from Christian Peacemakers Teams.]

In May 2021, Süleyman Soylu, Turkey’s Minister of the Interior, gave a speech to Turkish soldiers at a base in occupied territory, just a few kilometers from the village of Hirure. He spoke clearly: “Our goal is the same here as in Syria. We have come to stay in Iraq.”

Shortly after Soylu’s appeal, a Turkish soldier shot the peasent Ramazan Ali (70) in Hirure. He can never again water the fields or harvest nuts from the fields around the village. “The grenade struck three meters behind me, and then everything turned completely black,” he told me from his sickbed when I visited him three weeks later. His life was saved when his neighbors took him to the nearest hospital.

Ramazan tried in vain to get up in bed. I saw how the body jerked from the pain of Turkish shrapnel. “Turkey is waging war against us civilians. Not against the PKK. Bring this message from me to politicians and others in Norway!” he said before we said goodbye.

“Kurdistan is a candidate to become the next Ukraine”

Nowadays, freedom of expression has poor conditions in Bashur (The Kurdistan Region of Iraq). The regional authorities persecute both journalists and political activists. During a two-week stay in March 2022, I met women and men who were happy to talk about the difficult situation in this part of Kurdistan. For understandable reasons, most of them wanted to remain anonymous.

Iran had just launched a rocket attack on Hewler (Erbil). Every day there were reports of Turkey’s war in the far north of Bashur. While we were there, a dramatic verdict also came from the Supreme Federal Court in Baghdad. It states that the Iraqi government in Baghdad has the right to control oil and gas resources in the Kurdish region. The verdict threatens President Nechirvan Barzani’s secret agreement on supplying oil to Turkey for 50 years. According to the verdict, this agreement is illegal. Several persons said that Turkey has promised to defend President Barzani and this agreement against the verdict from Baghdad.

The war in Ukraine looks different from Bashur than it does in Norway. Many fear that states already waging war in the Middle East will expand their attacks “in the shadow of Ukraine.” Both the media outside the Middle East and the UN Security Council will for a long time direct all their attention to the war in Europe.

There are many military actors in the different parts of Kurdistan: USA, Russia, European countries, Turkey, Iran, Iraq, Syria, Israel and non-governmental military groups. The various alliances occasionally shift. One thorough description that I heard of this complicated situation had the following summary: “Kurdistan is a candidate to become the next Ukraine”.

Turkey has not made much military progress since its offensive that began almost a year ago. After I left Bashur, Firat News has described secret plans for the war between Turkey and Barzani’s KDP (Kurdistan Democratic Party). The KDP is the main party in the coalition government in KRG. Anonymous sources inside the KDP’s power apparatus have, among other things, described plans to attack both civilians and peshmergas by KDP. This is intended to be presented as attacks by the PKK. The attacks may provide a basis for Turkey to launch a new military offensive from the area near Kani Masi, “to protect civilians and help the KDP”.

So April will show if “peace broker” Erdoğan really launches a new offensive in Bashur, in the shadow of the war in Ukraine. I hope the person that said that “Kurdistan is a candidate to become the next Ukraine” is wrong.