Kobane Trial: Kışanak accuses the judiciary of becoming a ‘plaything of the government’ as politicians request recusation

The third hearing of the ‘Kobane trial’ took place at Ankara’s 22nd Heavy Penal Court in Sincan Campus today (May 20).

Sancar stated that the Kobane Case was a ‘plot’ prepared by the ‘political power’ for revenge, and said: “We will continue to reveal the truths in the courtroom and all areas of democratic politics.”

The hearing started with the former HDP Deputy Ayla Akat Ata’s statement. “What is attempted to be put on trial here is not us personally, but the set of thoughts of the HDP. The people lined behind me are all the ‘othered’ people. I reject every single member of the Court’s board,” Aka said during the trial.

“This file is the file that we will turn from darkness into light. We hope that you too,
by allowing us to speak our words without interfering with our words, by fulfilling the responsibility to reveal the truth, by drawing attention to these issues, will also serve justice,” she stated.

Following Kurdish politician Ayla Akat Ata, Gültan Kışanak, the former Co-Chair of Diyarbakır’s (Amed’s) Metropolitan Municipality, began her speech from Kandıra F-Type Closed Prison via a video-conference system: “This case is a case of removing us from democratic politics, from parliament.” 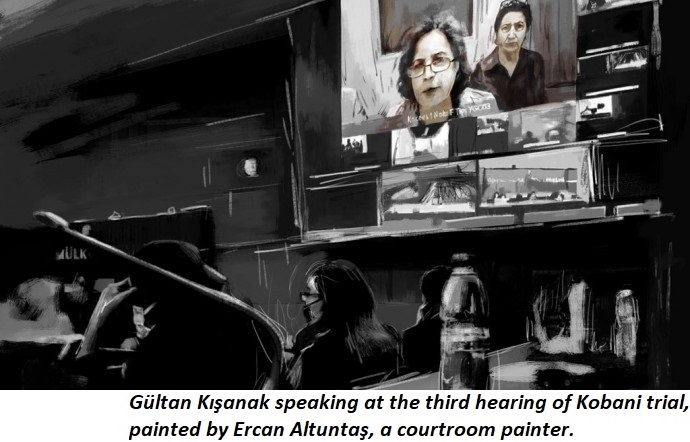 In reference to the Court’s board, she stated: “You are catering to this. Don’t engage in demagoguery here by interrupting our speeches.”

Kisanak continued: “I am Kurdish, I am a Kurdish woman. Don’t find new adjectives for me. They call me a ‘separatist’, a ‘terrorist’ whenever they find it necessary. Once the facts in history are clarified, you will be ashamed. We are giving you the last chance to get out of this shameful situation,” she said.

“Today, there has been a big crisis within the judiciary. The judiciary has become a plaything of the government. Corruption, shamelessness, stealing, and all the mafia relations are covered up. But people are arrested for posting a single tweet,” she said and appealed to the judge.

“We know your side. You showed it on the first day. The state is using you and you can get support from the bosses. You have shown very well that you are not following an independent jurisdiction or a place of law. For this reason, I request the recusation.”

“HDP is the Turkish party. If Kurds, Alevis, Sunnis, Armenians and women are brought together in the same party, it is the party of Turkey. You do not judge the HDP, but you are judging the HDP being a party of Turkey. You say: ‘Don’t stand side by side. The HDP is the bearer of the flag of gender equality. In this case, you say: “Men and women are not equal”. This is a lawsuit against the equality of men and women. You judge the ecological movement. By throwing the HDP out of politics, you want fascism to be free of obstacles. This case is a case of removing the barriers in front of fascism. It has nothing to do with the Kobane incidents.”

Kışanak also reminded the Court’s board that the ones responsible for the murders on 6-8 October 2014 have not yet been investigated: “There are some so-called lawsuits related to the 6-8 October events all over Turkey. Why, who killed those people, who gave orders to these provocateurs those days? I wish you could come up with this. I wish there was a judiciary investigating this instead of judging us. There are politicians in this room, we are here. We are the ones who desire to find solutions to problems and do not hesitate to pay a price when necessary. What you say as ‘evidence’ are only the press releases. There cannot be an indictment from these.”

After Kisanak spoke, the HDP politicians continued with their statements. The HDP’s former Mardin MP Gülser Yıldırım gave her defense in Kurdish. However, Yıldırım’s and other politicians’ defence statements were not translated since there was no interpreter in the courtroom and the demands of recusation and those who made their defense in Kurdish regarding their eviction requests were received without a Kurdish interpreter being present.