Kobanê movie to come to audiences in Europe and Kurdistan

Featuring 200 Kurdish fighters and internationalists, and reflecting the aspect of the war against ISIS which was led by women, the Kobanê movie will be screened in Sulaymaniyah city in the Kurdistan Region of Iraq as well as in various European cities.

Kobanê, a movie depicting the successful defence of the Kurdish-led forces against Islamic State (ISIS) jihadists in the harrowing six-month siege of Kobane in northern Syria in 2014, will be screened in Europe and Sulaymaniyah city in the Kurdistan Region of Iraq (KRI) throughout January and February.

Directed by Özlem Yaşar and co-produced by the Rojava Film Commune and the Kurdish arts movement TEV-ÇAND, the movie was directed in Kobanê city, in Kurdish-controlled North and East Syria.

The film features 200 Kurdish fighters and internationalists and reflects the aspect of the war against ISIS which was led by women.

The trailer of the movie, which focuses on the siege of the city in September 2014, when 350 villages around it were occupied, was released online on 13 September.

“We didn’t follow chronological order in our film ‘Kobanê’,” said Özlem Yaşar in an interview. “We based fictional aspects of the film on reality. We did interviews with hundreds of people who actually experienced the war at first hand, and with residents of Kobanê. This brought the reality of what happened in its purest form and we did our best to hold on to this reality.”

The movie is planned to be screened on 5 January in Sulaymaniyah, 12 January in Frankfurt, 14 January in Marseille, 4 February in Stockholm. 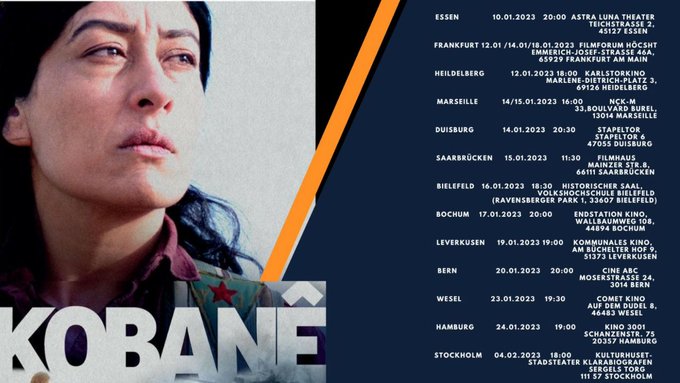