Kışanak speaks out from prison: ‘Those on the outside must look out for those behind bars’

Imprisoned Kurdish politican Gültan Kışanak says that the Kobane case, in which she is accused of instigating violence, is 'a recent example of the Turkish political tradition of blaming massacres perpetrated by the deep state and the counter-guerrilla on the left.'

Gültan Kışanak, a prominent Kurdish politician, former MP and dismissed mayor of Diyarbakır (Amed), who has been incarcerated in Turkey since October 2016, responded to questions addressed to her by the feminist website Çatlak Zemin.

Kışanak was first arrested when she was 19, as part of the crackdown on Kurds following the 1980 military coup in Turkey. She served time in the infamous Diyarbakır Prison, where she was held in a dog kennel for months on end for refusing to comply with unreasonable orders from guards.

She was recently arrested in October 2016, this time as part of a crackdown by the administration of the Turkish president Recep Tayyip Erdoğan.

Mass arrests of other senior officials of the pro-Kurdish Peoples’ Democratic Party, including co-chairs and MPs, followed a week later in November. She has been in pre-trial detention since then, and with additional charges filed last year, is facing a possible sentence of several hundred years.

One of the main accusations against her is that she acted as one of the instigators of the Kobane Protests in 2014, where dozens lost their lives as demonstrations were staged against a siege by the Islamic State (ISIS) of the Syrian Kurdish-majority town of Kobane, and against the Turkish government’s policy of isolating the people in Kobane who were resisting the siege with only small firearms.

Below are only some of the questions addressed, and the answers by Kışanak. There is also a note included at the end of the interview.

You have been behind bars for five years. Your trial continues still, and all your cases were combined with the Kobane trial in July last year. What awaits you now?

This case has political significance. Criminalising society’s reaction to the barbarism of ISIS means upholding that barbarism. They want to make democratic politics pay for the defeat ISIS suffered in Kobane. But it was the people’s resistance there that allowed the Middle East to breathe a little easier, and that victory is in part due to the democratic public in Turkey showing solidarity.

For us women, ISIS represents the most vile patriarchy and organised misogyny. As such, we consider this case also to represent the wrath against women’s claim for freedom. It harms my dignity to face trial as a woman for speaking to the press against ISIS attacks on Kobane. I spoke because I, as a woman of conscience and responsibility, could not sit silently while ISIS sold women in slave markets and used them as concubines in Kobane, as they did in Sinjar and other places.

This case is also a recent example of the Turkish political tradition of blaming massacres perpetrated by the deep state or counter-guerrillas on the left and on revolutionaries. Another aspect of the case is that it is being used to shut down grassroots politics. Certain opposition groups have started to avoid taking to the streets for fear of “provocation”, and this is the point to which the state wants to bring all forces of democracy.

The only evidence against us is conspiracy documents, and the trial itself has virtually been made into a method of torture. There is a two-week long hearing, followed by a week off. We are expected to sit on a chair for hours on end for two weeks at a time following the proceedings, and in the week in between inspect thousands of pages of accusations and prepare our defence immediately. The case files are not delivered to us in print, they are uploaded to the prison computers, to which we only have limited access. They want to usurp our right to defend ourselves, and wear down our lawyers. But we will prevail with our democratic struggle despite all the injustice. 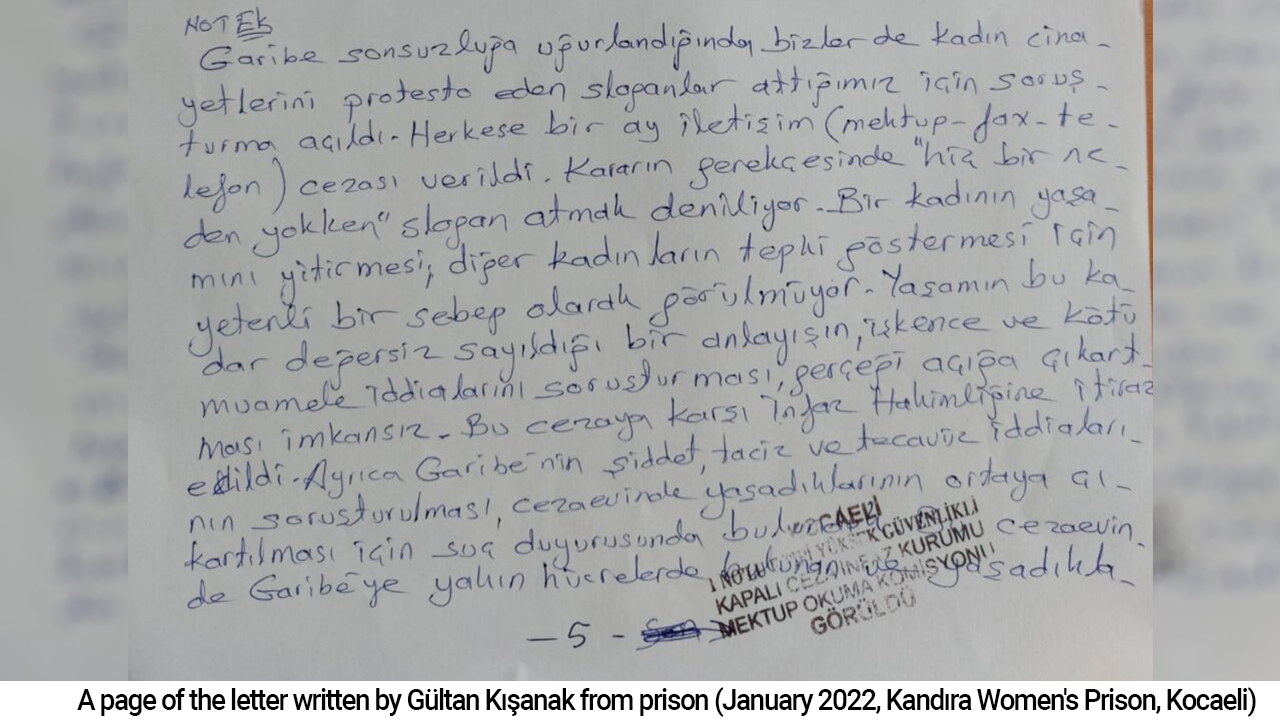 You have spoken out about the covid-19 pandemic normalising isolation conditions in the prisons. Added to the harsher political climate in Turkey, how has the pandemic affected inmates? What rights violations have you encountered?

The pandemic has turned prisons into places of absolute isolation. We were not allowed open visits for 19 months, we were not allowed to touch our loved ones. On 9 December, we were allowed a visit limited to half an hour from two people each. It is still not clear whether we will be able to receive visitors in the future.

There is no longer any communication within the prison. We used to have several hours in the week to gather in the yard, chat and exercise. Since March 2019, we have not been able to meet with anybody but our cellmates.

We face new restrictions on visitors, and almost none of us are allowed to exercise our right to receive three non-relatives regularly. The wardens, prosecutors and courts are all in agreement on making things difficult for us.

As women political prisoners, we try to keep our spirits up and stay healthy. Women’s solidarity in here and on the outside is our greatest support and hope.

Did you know Garibe Gezer? She was found dead a few months after publicly accusing the guards of sexual assault. Some women say this was murder. What could have been done differently?

I did not know Garibe personally. We didn’t hear when she was transferred to our prison. These Type-F prisons are so isolated that one only hears news about the nearest three or four cells. I do not know what she suffered, I only heard of her when she was placed in a cell in my corridor for 10 days or so. She was on hunger strike because she was not allowed to move to a cell with a friend of hers. We did not hear from her again after she was placed elsewhere, but we were relieved when we heard she had met with lawyers. We read about the sexual assault she suffered in the newspaper. We could not stay silent, but we have been asking ourselves ever since we heard about her death what else we could have done to prevent this horrendous outcome. We are wounded and furious. We feel a responsibility, despite the isolation. Her resistance and rebellion gave us a false sense of comfort.

Any sound out of the ordinary in these cells raises a flurry of questions, what happened, who was it, did something happen, was that crying? Most often we can only guess. This is why NGOs, rights defenders and legal supporters have to be in constant communication with prisoners because solidarity restricted to those inside is not enough. Those on the outside must look out for those on the inside, and be their eyes and ears. Under isolation conditions, prisoners cannot see beyond the walls of their cells or hear beyond the concrete.

You have witnessed the condition of Aysel Tuğluk, your comrade behind bars, your friend. Her dementia is getting worse. Women’s solidarity comes to the fore more at this point. What can you say about her? How is your solidarity behind bars?

We have known each other for so long. We grew up in the same neighbourhood, and when I was working as a journalist she was a human rights lawyer, working in the fields of justice, the Kurdish issue, peace politics and women’s rights, among others. Later we worked in the same political parties together, and for the last five years, we have served time together. Her health problems today break my heart.

We don’t know what Aysel will forget next. Sometimes things come back, but she forgets them again. She needs constant company and a “memory comrade”, so to speak. We lack the resources here to slow the advance. She is separated from old friends, she can’t talk with people or watch others share social activity, she cannot visit familiar places. All her time is spent in a small cell, in a routine away from all stimulation. Dementia thrives under these conditions. In the final stages sufferers will forget to turn on their side while sleeping, or to swallow. They lose all vital function. Aysel Tuğluk must be released. This we insist on, to save her life.

We women in the prison support her the best we can, but it is not enough. Two of our friends stay with her, the maximum allowed, and they take care of her needs voluntarily. But she needs to have different people accompanying her, and we do not have that option. The administration insists on keeping her alone in quarantine after she goes to hospital. We are struggling to resolve these problems.

An inquiry was launched against us because we chanted slogans in protest against femicide as Garibe Gezer’s funeral was going on. A one-month communication ban (letter, fax, phone) was imposed on everyone involved. The official explanation for the ban was ‘chanting slogans without reason’. So they don’t consider the death of a woman as a sufficient reason for other women to react. It is impossible for such minds, so indifferent to the value of life, to investigate claims of torture and ill treatment and reveal the truth. We lodged an appeal against this disciplinary action. There are also women prisoners here who lodged a criminal complaint concerning Garibe Gezer’s death in suspicious circumstances and who called for an investigation into the claims regarding violence, abuse and rape that Garibe had been subjected to. These are prisoners who had been incarcerated in cells close to Garibe’s, who had been witness to what she lived through, who had listened to her, and who know whether or not the intervention of the prison administration in the case of Garibe’s death was timely. We ourselves lodged an application for these women to be heard as witnesses and for the prosecutor to take their statements into consideration. We also sent letters to the Ministry of Justice. We now expect the public as a whole, and women in particular, to be sensitive about this matter.