Jeremy Corbyn: ‘Negotiations with Öcalan are actually a path to peace in the future’

In a wide ranging analysis of the manner in which Kurds have been repressed, Jeremy Corbyn explained why he believed that "negotiations with [Abdullah] Ocalan," leader of the Kurdistan Workers' Party (PKK), "are actually a path to peace in the future."

Jeremy Corbyn, the founder of the Peace and Justice Project and also UK MP for Islington North and the former leader of the Labour Party, presented his perspectives on the nature of the repression of Kurds at a Defend Kurdistan, Defend Freedom event that was hosted by the Kurdish People’s Assembly.

The event, which was chaired by Kulsoom Jafri, also featured Nilüfer Koç (a member of the Executive Council and spokesperson for the Commission on Foreign Relations for the Kurdistan National Congress – KNK), Hisyar Öszoy (an MP for the Peoples’ Democratic Party – HDP in Turkey), Joshua Virasami (a Black Lives Matter UK representative) and Kate Hudson (General Secretary of the Campaign for Nuclear Disarmament – CND).

Speaking as a representative of the Peace and Justice Project, Corbyn noted at the outset that “the events that have happened on many occasions” – i.e., the repression of the Kurds – “should be underpinned and understood in the context of decades and decades of discrimination against Kurdish people within all the nation states that includes Kurdish people but, in particular, within Turkey where there was no recognition of the Kurdish language, of Kurdish identity, of Kurdish organisations and, indeed, where many prominent, active people within the Kurdish community ended up in prison or on trial and still do.”

He noted that the Turkish state “has been unbelievably brutal in its treatment of Kurdish people within the borders of Turkey but also” beyond its borders, given its “constant forays over the border into the Kurdish area of Iraq and now into the Kurdish areas of what is the national frontiers of Syria and the brutality that goes with that is also matched by the lawfare that is used against Kurdish representatives within Turkey.”

He emphasized, as causes for concern, “the constant attacks on the HDP, the attempts constantly to ban the HDP, the refusal to recognise that negotiations with Öcalan are actually a path to peace in the future and recognition of the Kurdish people are a path to peace in the future.” In this repressive context, he noted that “a number of us have constantly called for the release of Öcalan.”

“The Project for Justice and Peace which I’m representing”, he clarified, “was set up in order to deal in part with international issues and work in solidarity with existing organisations to try to bring about a long term peace and justice. 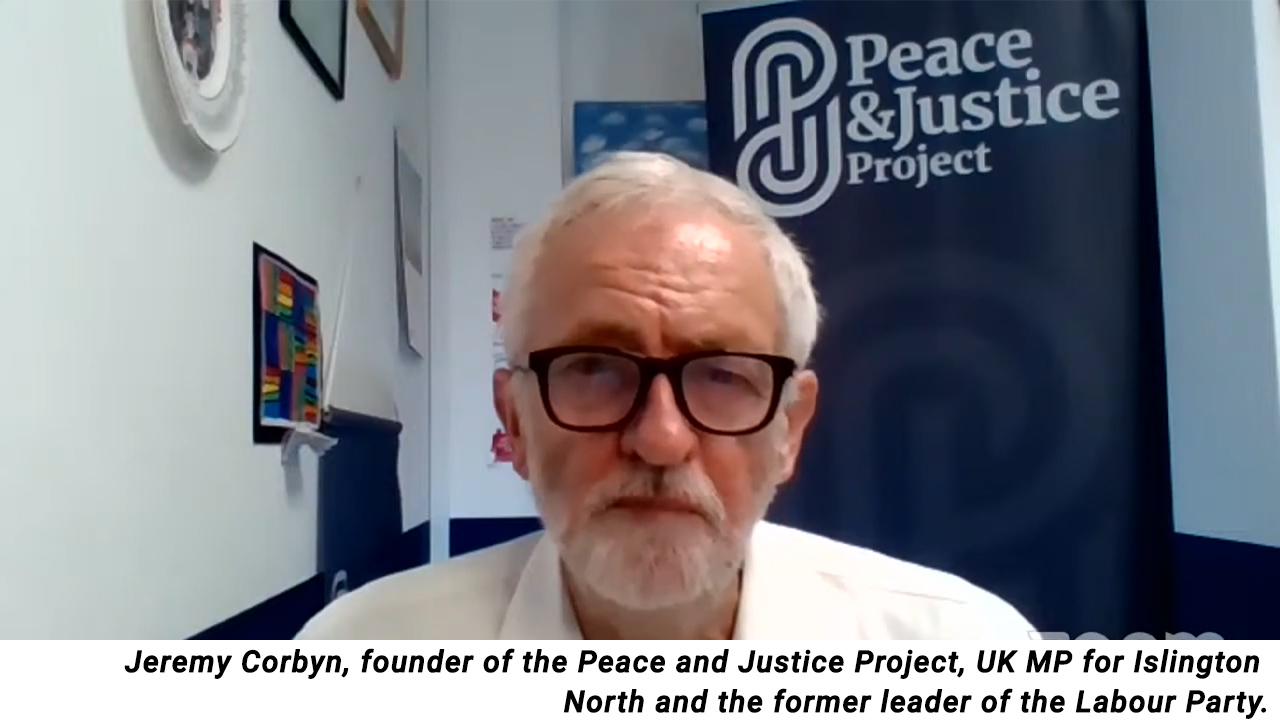 He pointed out that the repression of the Kurds has taken place within a wider geopolitical context: “But it’s also a question of the interests of the west in this. The interests of the west are to keep Turkey in NATO, to continue to supply arms to Turkey even though [Turkey’s president Recep Tayyip] Erdoğan is buying arms from Russia and other places at the same time, and also the way in which Erdoğan uses refugees as a sort of ‘bargaining chip’ and if he’s not given sufficient money by Western Europe, then threatens to deport large numbers of refugees – Afghans and others – into Greece with all the attendant problems that Greece, and so on and so on, face.”

Erdoğan’s actions, he suggested, are not driven by humanitarian agendas: “It’s not sympathy for refugees, it’s often exploitation of refugees, in the situation that they face. And so there are issues that we have to face” and confront.

He called for, and believed, that ongoing public initiatives and solidarity actions could have an effect in changing this situation: “But if the events that we are promoting this evening, the events that you all work so hard on, do bring together a greater sense of unity of Kurdish people within whatever national frontier they have, and create an international pressure to pull Turkish troops out of Northern Syria and recognise the rights of Kurdish people within Northern Syria, then that would be a huge step forward and help to bring about that sense of unity.”

Peace could be achieved if certain concerns could be addressed, he emphasized: “We want peace. You only get peace if you recognise what the causes of injustice are, recognise what the injustices are, and recognise the inalienable right of people to their own self-determination, to their own voice, to their own language, to their own culture. And that surely is what we’re about. There are more allies than you understand in [UK’s] parliament because they’re continually growing. It’s changed a lot since 1988 … We will continue to speak out with you,” he stated.