Medya News talked about Dengbej, jazz, blues, hard rock and modern music with two Kurdish musicians, Yunîs Das and Ferit Sevim. Both started music within a Dengbeji family in Şırnak (Şırnex) and both have made numerous contributions to Kurdish music individually and with their group, Teq û Req.

The two artists, who grew up with Dengbej songs, are now bringing together traditional and modern styles. Ferit says, ”If I had a musical note, it would be ‘Dê’; which means mother, my mother’s voice”. Yunîs says it would be “Le”, because it is unique to Kurds.

Furious as metal, calm as jazz, enriched by the sadness of the blues, this music represents a new development in contemporary Kurdish songwriting.

How did you start in music?

Yunîs Das: I was born in Cizre, where I also grew up. My interest in music came from weddings and musicians in the city. My father used to sing folk poems, not on a large divan, but on his own divan. My mother was good at it, too. Actually, I can say that my interest came from the family. I did not have an education in childhood. I learned bağlama, keyboard and percussion. All were learned outside of the professional sphere. My professional acquaintance with the guitar actually started in college. My family was very patriotic. I had noticed urban and rural life since I was a child. I discovered early the differences between music of the city and the countryside. Again, my childhood coincides with the rise of the Kurdish political movement. Thus, I was introduced to political Kurdish music during the periods of Kom and MKM. This actually points to traditional Kurdish music. It started with seeing Ciwan Haco and modern Kurdish music on MED TV in the 90s. The press actually played a very important part in this respect. 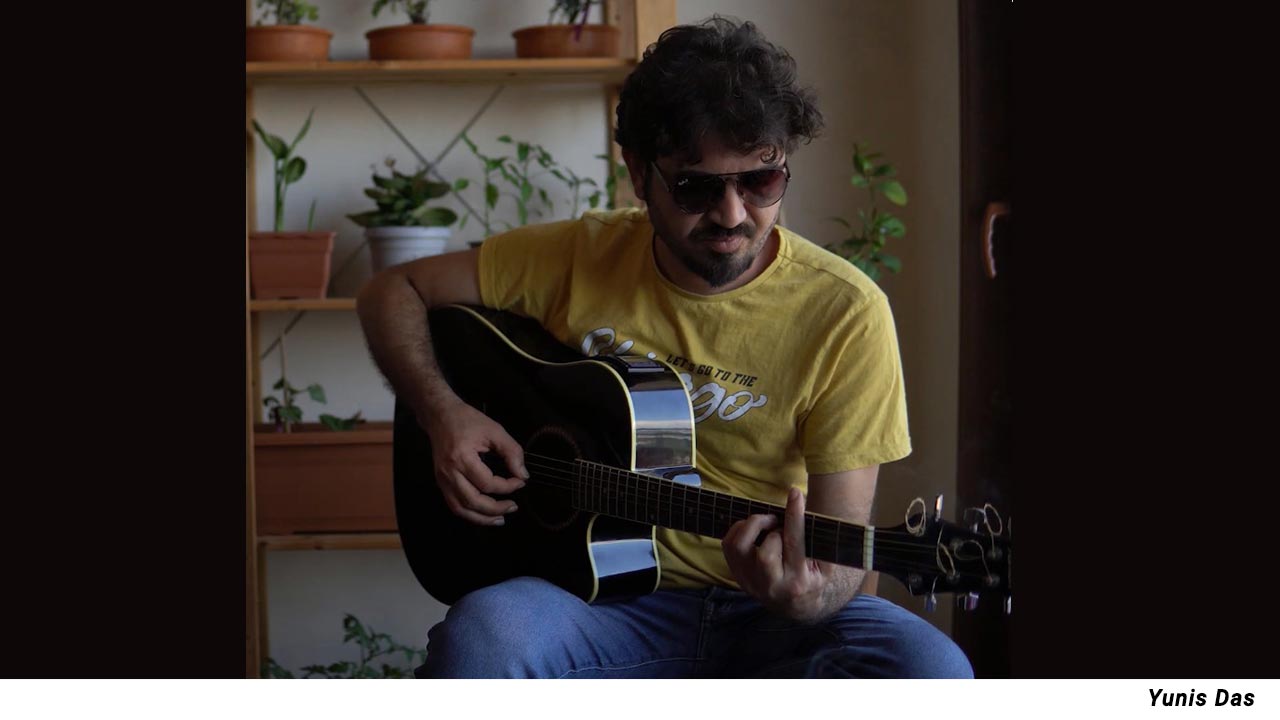 Ferit Sevim: My family comes from the Şırnak Dengbej tradition. My mother and father were Dengbej. I grew up with Dengbej. Actually, I can say that I grew up with music. My interest started in my high school years. I encountered the blues by listening to a track on YouTube at the internet cafe where escaped from school to play games. Mannish Boy by Muddy Waters was a moment when I found myself and started to listen to the blues. My professional work started in 2014. However, around that time, I had a traffic accident. My heart stopped twice and I couldn’t walk for two years. Then, after recovery, I returned to playing music in 2019.

You have a traditional music style that comes from your mother and father, and then you get to know Ciwan Haco and Kom and you admire that style. Was this transition process difficult?

Yunîs Das: Of course it was difficult the first time. Vocals are at the forefront in traditional music. I wasn’t very impressed when I listened to Ciwan Haco with his orchestra. Only after years I was able to understand this ambiance. The transition from traditional to modern did not happen all of a sudden, but towards the end of the 90s I started to understand this style. Modern Kurdish music had a more universal style.

Do you miss the Kom periods, the emergence of Mesopotamia Cultural Center (MKM) and the music of that period?

Yunîs Das: Of course I miss those times very much. Amid the burning issues of the 90s, the Koms provided great morale for the Kurds. They added to Kurdish music with new instruments. In this respect, this process is very important and valuable.

Ferit Sevim: Of course, I miss those times very much, too. We can call it the golden age of Kurdish music. Their contributions to Kurdish music were enormous, and it continues.

How would you describe your style of music?

Yunîs Das: I was a language activist at the university. During my university years, I worked on language, culture and art and we established a music group called Teq û Req during this period. Teq û Req was mostly contemporary world music styles. We also gathered what we learned from language studies and tried to make it visible with music. The work started in 2008, but we released the first album in 2012. All our effort was to contribute to modern Kurdish music. We never did it for the music market. We included hard rock, blues and folk rock styles on the album.

You include three styles that we haven’t heard in any Kurdish music until now. What were the first reactions?

Yunîs Das: Even though the style is different on this album, we actually did not stray far away from tradition. We focused on traditional melodies in the album. Modern Kurdish music still does not get the respect it deserves. I still cannot say that Ciwan Haco’s concert in Batman had enough participation. Perhaps one of the main reasons is the political stance of the Kurdish language in these lands. Kurdish music cannot be separated from Kurdish language and culture. In addition, there is the denial policy on this language. For example, this denial reveals a category: Kurdish music. When you ask a young person what are you listening to, they don’t say blues or jazz in Kurdish. They say I listen to Kurdish music. Language domination. Language becomes a category of music. I do not think that the implication of resistance in the music of the Kurds is strong or effective in any other language. In fact, it is possible to see a serious resistance in music, especially in societies where the colonies tried to dominate. I do not know of any other society in the Middle East where music has become a form of resistance and functions as a language.

Ferit Sevim: There was concern over the first impressions, but my family supported my music. However, there were economic worries in my family. While I was trying to alleviate my anxiety, I was also doing things that I was not happy about. So I started to devote myself completely to music and production. This is actually not just my problem. Today, many of our colleagues are working in other jobs. The main reason why my family supported me is that I was doing music with my native language. I can say that first impressions were positive.

What is Kurdish Generation Z listening to?

Yunîs Das: It may not be accurate to make such a distinction sociologically. I cannot call this “Generation Z”. A digital generation is growing and this generation is dominated by a digital world. I can talk about the Kurdish generation born in the 2000s. Unfortunately, the Kurdish youth do not have good knowledge of their language, but there is a national consciousness developing, maybe to the advantage of the language. This generation has created artists who could not become actors in normal life but can become actors in the digital world. There is a generation that says “I understand but I cannot speak” and this generation only listens to the melody in Kurdish. They do not understand the content of the melody. The children who made music on Istiklal Street gained popularity not because they made high quality music, but because they made it in Kurdish. The main thing here is not how the music is but how it is expressed in this generation.

Ferit Sevim: It is not a CD, tape or record era. Whereas you could measure it in the past, today everything is digital. Thus, Generation Z, which consumes digital content, is decisive. The 90s generation affects the new generation. While the 90s generation was squeezed between the countryside and the city, the 2000s generation has largely adapted to urban culture. Remixed music is added to folk songs, attracting the attention of the new generation. This version of the song is listened to much more than the original. This is partly caused by the political inadequacy of Generation Z.

Do you think that music seen as an identity can be an obstacle to music?

Yunîs Das: I want to answer this question as a teacher, a Kurdish language activist, not a musician. Today, when we look at young people in urban life, we can see how successful the assimilation policy of the state is. Is music becoming an identity, an obstacle to its recognition? No, this can not be only a factor. Today, a generation is growing up that no longer thinks in Kurdish. The language vocabulary is narrow. This leads to listening to music from a nostalgic point of view. Therefore, music does not meet the new ways of life. This is why we criticise our Kurdish artists who do not make modern music. Music that can meet the new ways of life also paves the way for this young generation to spread this music. The language gains a global function and resists assimilation. Here it is necessary to put aside the concern of becoming popular and to realise the pioneering role of music in the development of language.

Ferit Sevim: I want to give a very short answer. Obviously, wherever it is, the existence of a language of music is an obstacle to the universal form of music.

Yunîs Das: Undoubtedly, the pain between the peoples creates the same melodies produced in a similar way. This is not just a situation which oppressed people share. Sovereign or regal music emerges in this way. While all the oppressed of the world say their laments more or less with the same tunes and emotions, the rulers create their anthems. The efforts of all the oppressed of the world to create themselves in music are common. Dengbej is generally based on Kurdish folk tales. It consists of work, love and current issues among the public. Dengbej is not a politicised style. However, the fact that Kurdish itself is political means the expression of Dengbej in this language has made it political. It is possible to compare the Dengbej, written and read against Mir, bey and aghas, to blues, the music of sorrow in America.