Zeynab Jalalian, jailed since 2008 in Iran and sentenced to life imprisonment accused of taking part in armed activities with the PJAK, is denied medical care despite suffering from serious health conditions.

The mother of Zeynab Jalalian, a Kurdish political prisoner in Iran, has called upon human rights activists, lawyers and the Iranian authorities to help her see her daughter, with whom she has had no contact in the last 15 years other than a few short telephone conversations. Zeynab is reported to be suffering from serious health conditions including a post-covid respiratory condition which she has said is so acute that it prevents her from sleeping, and a serious eye condition.

Zeynab was arrested in March 2008 for alleged activities with the political wing of the Party for Free Life of Kurdistan (PJAK), which aims at the empowerment of women belonging to Iran’s Kurdish minority, and Kurdish self-determination. 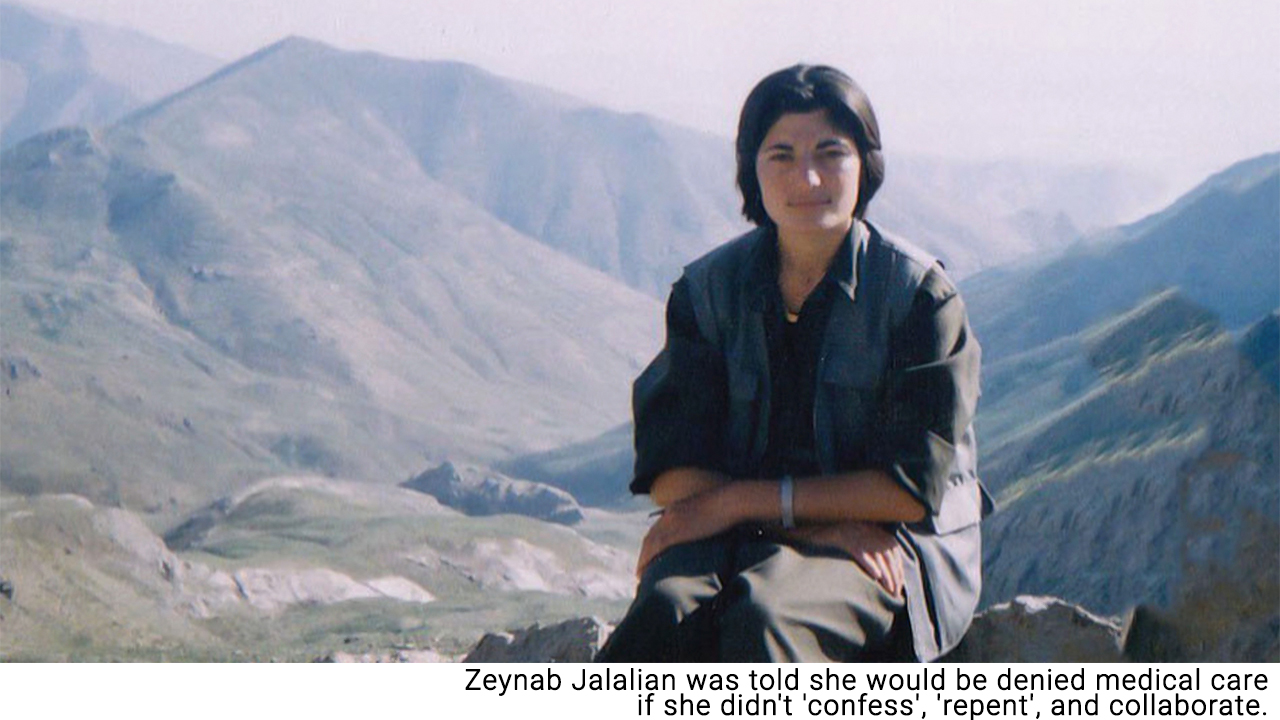 She was sentenced to death in early 2009 on a charge of ‘enmity against God’ having been accused of ‘taking up arms against the state’, despite the absence of any evidence linking her to the armed activities of the PJAK.

Although her death sentence was upheld on appeal in May 2009, it was commuted to life imprisonment in December 2011 after she was granted clemency by Iran’s Supreme Leader. In May 2019, her lawyer Amirsalar Davoudi was sentenced to a lengthy prison term in relation to his human rights work, and Zeynab Jalalian has had no lawyer since then.

Zeynab’s mother Gozel Jalalian recently released a video message, calling for a solution to the tragedy she is living through.

“I call upon the state authorities. They must make the conditions of her incarceration known,” she said in her message.

“They have to allow me, her mother, to go and see my daughter. For 15 years now I haven’t been able to see her even once. They took her to a place very far away. I don’t even know whether she is alive or not. There have been rumours that she got covid, but none of us family members were officially informed about this. The state is responsible for her situation. They don’t allow even lawyers to visit her.”

“This is cruelty to me. Why don’t they allow me to see her? What is her sin? What are we guilty of? Why inflict so much pain on us? I am old, and her father is deaf. I call on the state authorities to arrange some way for me to see my daughter.”

Zeynab Jalalian is known to have spoken to her family on the telephone in early June 2020 when she told them she had recently tested positive for covid-19. She was initally denied a transfer to a medical facility, but was eventually examined in a hospital on 8 June. After she was returned to prison she is reported to have been visited by interrogators from the ministry of intelligence who told her that unless she made videotaped ‘confessions’ repenting and agreed to collaborate, they would deny her access to any further health care and keep her jailed far from her family home.

She began a hunger strike in protest against the denial of health care and demanding to be transferred to Khoy prison or to Tehran’s Evin prison. On 25 June 2020, she was transferred to Kerman prison in Kerman province where she was subsequently held in solitary confinement for nearly three months, and was denied contact with her family until 28 July 2020, when she was permitted a short telephone call. During this call, which took place in the presence of interrogators, she said that the interrogators had instructed her to speak to her family in Persian rather than Kurdish.

On 22 September 2020, Zeynab Jalalian was suddenly transferred to Kermanshah prison, Kermanshah province. In a telephone call to her family from there, she reported a continued cough, respiratory difficulties and an eye inflammation related to her eye condition.

On 10 November 2020, she telephoned her family, this time from Yazd prison, Yazd province. She described the transfers themselves as a type of ‘mental torture’, each prison transfer meaning adjustment to new prison guards, prisoners and systems.

On 29 November 2020, Ali Jalalian, Zeynab’s father, was arrested and interrogated in relation to having spoken with human rights organisations and the media outside Iran about his daughter. He was released on bail a day later.

Zeynab Jalalian is currently serving a life sentence in Yazd prison, 1400 km away from her family home.