Iran: A Kurdish teacher gets a 10 year imprisonment sentence for teaching Kurdish 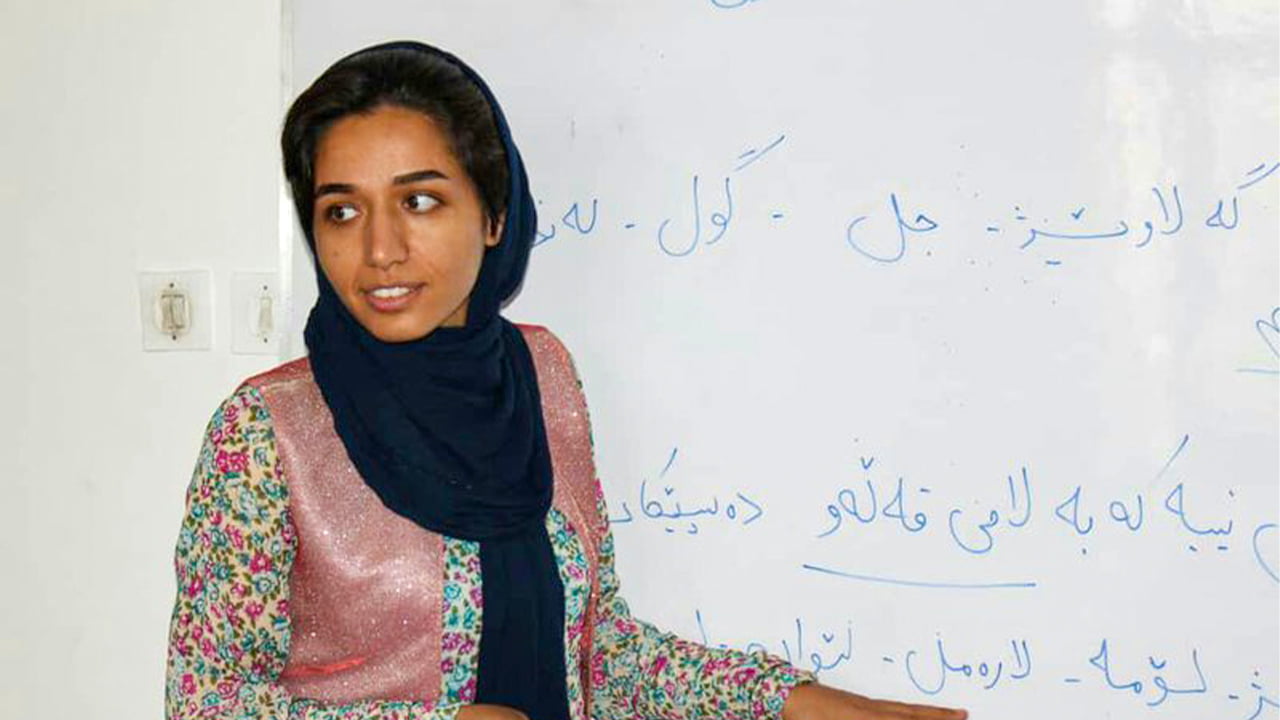 Zara Mohammadi is a 27 year old Kurdish teacher and a Non-Government Organisation (NGO) activist in Iran. She is from Sine, the capital of the Kurdistan region in the country. She is dedicated to teaching Kurdish to students who otherwise cannot learn Kurdish in schools.

Zara was sentenced to 10 years imprisonment by the Iranian Islamic Revolutionary Courts in July 2020. Her crime was to be a Kurdish teacher.

Although teaching and studying minority languages is permitted in the constitution of Iran, it has never been meaningfully practiced. So Zara and her friends founded an NGO called ‘Nojin’ to teach Kurdish. This led to her criminalisation.

She was interrogated by Iran’s Intelligence Organisation of the Islamic Revolutionary Guard Corps and then arrested in her hometown of Sine on 23 May 2019. She was subjected to harsh interrogations and torture during this period.

The court decided to sentence her to 10 years imprisonment, to represent each year she taught Kurdish.

After her arrest, she published a video on instagram about her “crimes”.  She states: “My crimes are teaching my mother tongue, distributing chocolates on Mother Tongue Day and helping the victims of floods in Luristan”.

Zara’s case drew outrage from many human rights activists, human rights organisations, members of the public and public intellectuals worldwide. Amnesty International called for Zara to be released and started a campaign on her behalf on Change.org.

Academics from all around the world also showed their support for Zara and appealed to the Iranian government to allow Kurdish to be taught in the country. Here is the full statement below, signed by ninety-five prominent academics worldwide, including Noam Chomsky, İsmail Beşikçi, Barzoo Eliassi, Ibrahim Sirkeci, Janroj Yilmaz Keles and Feryad Fazil Omar.

A Statement in Support of Zara Mohammadi

On 14 July 2020, an Islamic Revolutionary Court in Iran sentenced Zara Mohammadi to 10 years imprisonment for teaching Kurdish language on a voluntary basis. Zara Mohammadi is a co-founder of the Nojin Cultural Association, a civil society organisation focused on societal and educational initiatives, including teaching the Kurdish language and literature.

The Revolutionary Court’s latest ruling against Zara Mohammadi is therefore only the latest instance of the Islamic Republic’s securitization of the promotion, even by private individuals, of non-Persian languages.

We condemn the Islamic Revolutionary Court’s unlawful verdict, call for immediate acquittal of Zara Mohammadi and an end to discriminatory policies in Iran against non-Persian languages.

Is an early election coming?

Iran: A Kurdish teacher gets a 10 year imprisonment sentence for teaching Kurdish

Is an early election coming?