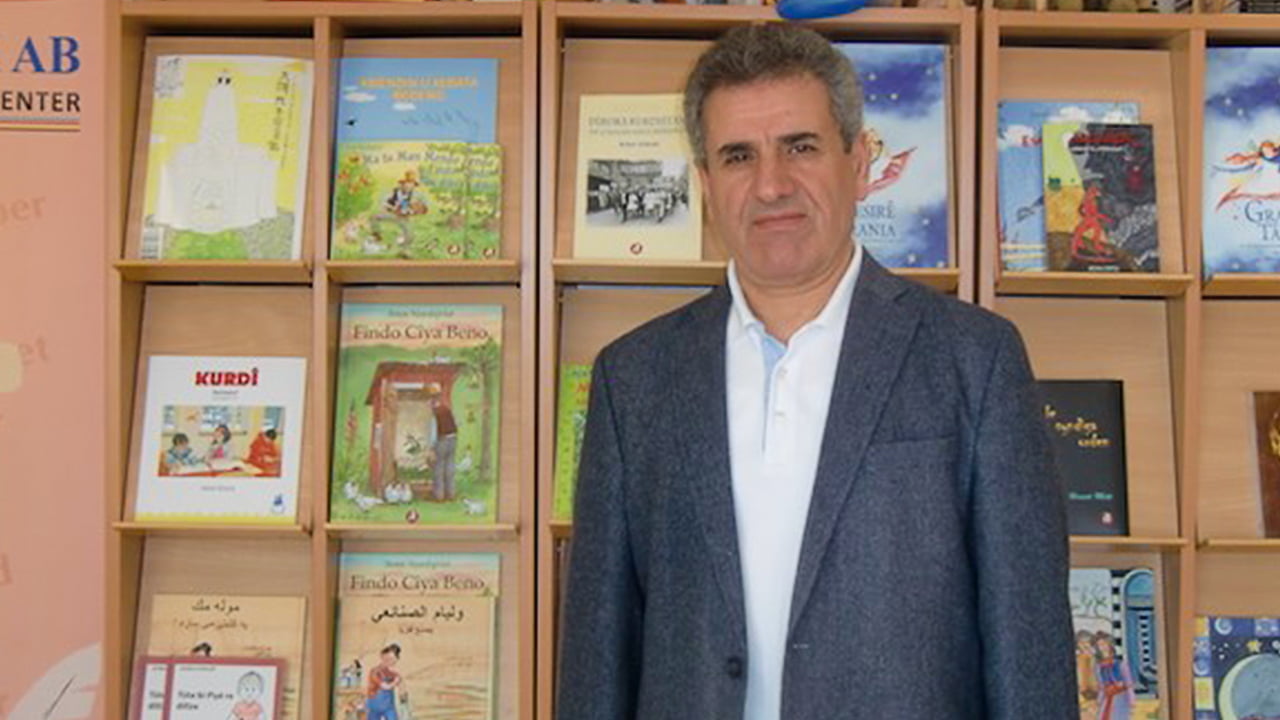 Ali Çiftci owns Apec Press, which is a Kurdish publishing house based in Stockholm, Sweden. Apec has published over 300 books, including 70 Kurdish children’s books since 1988 and several texts focusing on Kurdish history and genocide. In 1992, acclaimed Swedish author Astrid Lindgren personally selected Apec to publish the Kurdish translation of her classic children’s book, ‘Pippi Longstocking’. In recognition of his longstanding efforts to promote literacy and to preserve Kurdish dialects through Apec, Ali received a special award from the Swedish Authors Foundation in 1999 and from the Kurdish federation KOMKAR in Köln in 2004.

1 – Can you tell us about APEC and what motivated you to set up your publishing house? In what year was that?

I came to Sweden in 1980. Here, I continued with my studies at a teacher training college and worked as a teacher in a bilingual nursery school with Kurdish and Swedish children for two years. Since I knew both Kurdish and Turkish, I also worked as a mother tongue teacher with children from these language areas. The supply of children’s books in these languages was small and many Kurdish and Turkish children lost interest in reading. What was available to the children by way of books and texts, to help them with their learning, was mediocre. They had to work with worn photocopied texts that were completely without illustrations. If you put Swedish language books in their hands, it was also just the pictures that were interesting. It was in this environment that certain thoughts and ideas were aroused in me. Consequently, I started the publishing and printing business, Apec, in 1988.

I publish books in different languages, but the emphasis of my publishing activity is on Kurdish. Over 300 books have been published and 70 are specifically Kurdish children’s books. Many books have been translated from Swedish to Kurdish. But I also publish poetry, novels, short stories, history, linguistics, non-fiction and fiction in Kurdish, Swedish and even English. Examples of books published in English include Desmond Fernandes’ ‘The Kurdish and Armenian Genocides: From Censorship and Denial to Recognition?’ and Kristiina Koivunen’s ‘The Kurds: A Nation of Genocides’.

Initially, however, it was a question of urgently focusing on Kurdish children’s literature. Apec has also published Sven Nordqvist’s and Astrid Lindgren’s children’s books in Kurdish. Translations are now being made in both directions of all kinds of literature. Helena Sigander’s book ‘Dosan’, for example, has been translated and published in Kurdish. ‘Grania’s Tears’, by E. A. Nolan, has been published in both Swedish and Kurdish. Apec also actively collaborates with the Stockholm North Fiction Society. We publish books in the following languages: Kurdish (Kurmancî, Soranî, Dimilî), Swedish, Turkish, Vietnamese, Persian, Arabic and Assyrian/Syrian. We, of course, also publish teaching materials for mother tongue instruction in Kurdish. 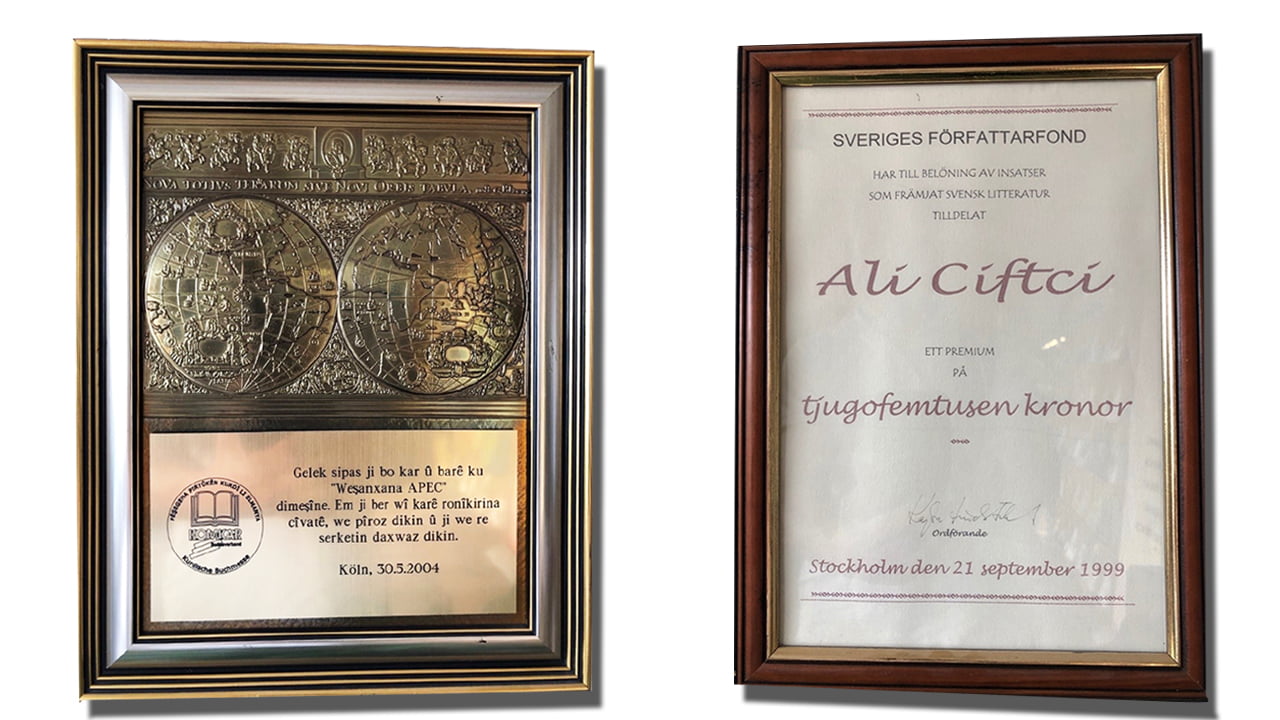 2 – Was it difficult setting up the publishing house in Stockholm, Sweden, in the 1980’s?

No, establishing a publishing house was not difficult or as difficult as it is in Turkey. However, we did have initial financial difficulties. Over time, as we began publishing Kurdish books for both adults and children, we received support from the Swedish State Council for Culture.

3 – Have there been any major obstacles you have had  to overcome over the years – any governmental pressures?

We have only experienced difficulties when we have sent children’s books to Turkey. On so many occasions, Turkish customs authorities have seized our books. They have even hindered our deliveries to book fairs in Turkey. When we opened a branch in the city of Diyarbakir (Amed) in 2014, for example, and sent 10 pallets of books, they were all seized by customs for six months despite all the required documents being arranged and customs fees being paid. This cost us a lot of time and money. I had to pay extra fees to cover storage costs during this time. In the end, the Swedish authorities helped, using silent diplomacy.

With these types of ongoing difficulties, on 7 September 2006, a written parliamentary question in the European Parliament to the Commission by Lena Ek (ALDE) made reference to the fact that “Turkish customs recently stopped a consignment of children’s books” published by Apec “in Kurdish en route to the town of Batman in Kurdistan … The above consignment was sent by an organisation championing children’s rights in Kurdistan, KOMAK, which is based in Sweden … This departure from the Copenhagen criteria, which requires respect for common democratic rules, including respect for minorities, is disturbing”.

Culture News had reported at the time that the Turkish authorities had demanded that KOMAK pay for “five teachers so that they would check for two to three months that the books” – being sent to newly opened libraries in five Kurdish villages – “did not contain any insult to the Turkish state or the father of the country”. The Swedish Embassy in Ankara had suggested sending Turkish translations for each of the book titles being sent but the request was refused. “Every single copy” of the 1,208 books must be read through, replied the authorities.

4 – Do you communicate with other Kurdish book publishers in the diaspora and in Turkey, Iraq (South Kurdistan), Iran, and Rojava in Syria?

Yes, I do. We have kept in touch, but many Kurdish publishing houses have closed in recent times. We have been cooperating in southern Kurdistan with Spîrêz. I have also attended book fairs in Diyarbakir where we have met each other.

5 – Have you had any recent economic/distribution/book-launch challenges because of the  ‘Covid-19 pandemic’ and related lock-downs in several countries?

Covid-19 has had a great impact on distribution and especially book presentations and launches. The book industry has been hit hard.

6 – Can  you also tell us  more about  the Kurdish cultural  magazine you publish? What are  the themes and issues it addresses?

‘Bîrnebûn’ (‘Unforgettable’) itself is a reminder to the reader of how important it is to express self-confidence and to not be forgotten. Initially, the magazine was in bilingual Kurdish/Turkish. Now, however, it is wholly published in Kurdish. Apec has been publishing it regularly since 1997.

Our editorial staff consists of Kurds who come from Anatolia. This gives the magazine a special identity – for and by Kurds from Anatolia. The magazine focuses on aspects relating to the lifestyles of Anatolian Kurds: daily language use as well as literature, history, religion, art, dance, music, clothing, marriage and funeral ceremonies, food culture and eating habits, etc. We engage with oral histories. In addition, ‘Bîrnebûn’ publishes occasional historical texts and cultural news by Kurdish writers from other parts of Kurdistan, which also links our histories together. The editorial language is North Kurdish (Kurmancî), which is spoken by the majority of the Kurdish population. Articles are also written in other dialects such as Zaza and Sexbizînî.

7 – How do you see the future of the Kurdish language?

The two main dialects, Soranî and Kurmancî, will survive because these two dialects are widely used today in new media such as the internet and social media. But the future of dialects such as Goranî, Sexbizînî and Zaza are uncertain. There is a real risk that these dialects will disappear.
As for the Kurdish language in northern Kurdistan, i.e., the Turkish part of Kurdistan and for Kurds in central Anatolia, the language is under serious threat. The situation of the Kurdish language has worsened over the past five or six years in Turkey. Nowadays, both in Turkish cities and in Kurdish cities, school-age children are rarely heard speaking Kurdish. I myself have attended the book fair in Diyarbakir several times and could see this so clearly. Today, the situation for Kurdish children is desperate.

In 2013-2014, for example, I was at the Diyarbakir book fair and it is customary that for its first two days, all primary and middle school students can visit it. Since we are a children’s book publisher, I had on display many children’s books in Kurdish. Most of these books were translations from Swedish children’s book authors and these books had attractive, beautiful cover pictures. Almost all the children came to our stand and looked through the books and liked the pictures immensely. When I then asked them in Kurdish what they thought of the books, they could not answer because no one knew Kurdish. It was tragic!