Seventy-five women's organisations and individuals have urged the UN to condemn Turkish aggression against the Kurds and mobilise its mechanisms to stop Turkey’s cross-border attacks.

A group of women’s organisations and individuals, feminists, union representatives, journalists and academics have called on the United Nations to take steps to stop Turkey’s attacks against Kurds in north Syria, east Syria, the Kurdistan Region of Iraq (KRI) and the Yazidi homeland of Sinjar.

A meeting, organised by Kurdish women in Syria’s Kurdish city of Kobane on Monday concluded with a statement making a joint call on the UN. 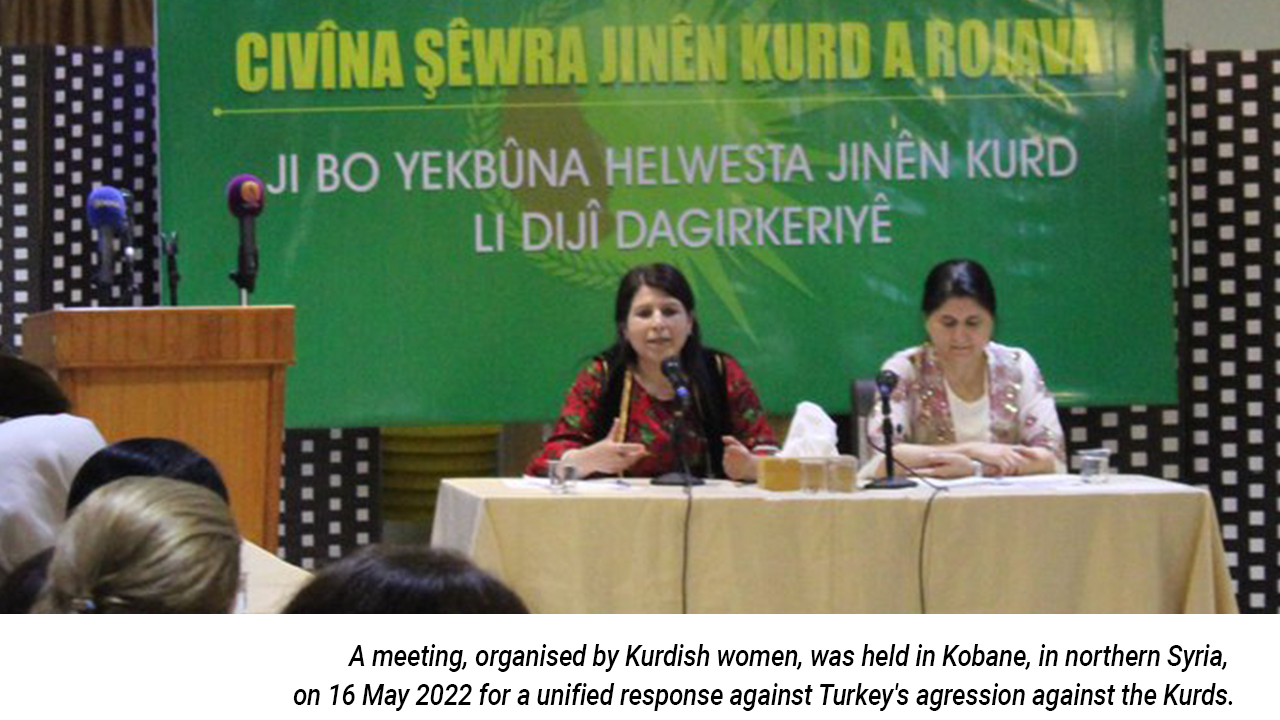 The statement, signed by 75 organisations and individuals from across the world, reads as follows:

“To the UN Secretary-General,
To UN Women,

Turkey’s aggression against the Kurds reached a new stage in 2017 when it started its airstrikes against North East Syria, the Yazidi homeland Sinjar, and Camp Makhmour in North Iraq, where more than 11,000 Kurdish refugees live.

Since then, Turkey has occupied the mainly Kurdish populated cities of Afrin (March 2018) and Serêkaniyê / Ra’s al-‘Ain (October 2019). Turkish armed drones permanently fly over North East Syria, Sinjar, and Makhmour, creating an atmosphere of fear and deep insecurity. Civilian infrastructure, cars, and houses are attacked without warning. People flee their land because they fear further Turkish attacks and occupation.

Turkey justifies its extrajudicial killings, drone attacks and military occupation operations as ‘self-defence’ in terms of Article 51 of the UN Charter. (…)

Suborganisations of the UN themselves regularly produce reports on the security situation in Syria as well as in Iraq. Neither North East Syria, the Yazidi people of Sinjar nor the Makhmour Refugee Camp pose a security threat to Turkey. (…)

We the undersigned do not accept the UN backing of Turkish aggression against Kurdish people in North East Syria and Northern Iraq. We reject Turkey’s claim of self-defence and stress that the Turkish state is the attacker. We call on the UN to condemn Turkish aggression against the Kurds and mobilise its mechanisms to stop Turkey’s cross-border attacks on North East Syria and the Kurdistan Region of Iraq / Northern Iraq.”

Among the signatories are

Judith Butler, Maxine Elliot Professor in the Department of Comparative Literature and the Program ofCritical Theory, University of California, USA

Neemat Koko, Director of the Center for the Gender Studies, Sudan

Rita Segato, feminist academic and Professor Emerita at the University of Brasilia, Argentina