HDP’s Buldan speaks at the funeral of Deniz Poyraz: ‘This was an operation, not a provocation’

Thousands of people attend the funeral of Deniz Poyraz in Kadifekale, Izmir to bid her a last farewell.

Onur Gencer, a man who fought with Turkey’s affiliated gangs in Syria and reportedly a supporter of the MHP, a junior coalition member of the Turkish government, walked into the Peoples’ Democratic Party’s (HDP’s) office in Izmir and shot and killed Deniz Poyraz, a Kurdish woman who was a member and a worker of the HDP in cold blood as she ate her breakfast.

Thousands of people gathered in the Kadifekale, Kurdish-majority neighbourhood on Friday for the funeral of Deniz Poyraz, MA reports.

The mother of Deniz, Fehime Poyraz, lamented for her daughter as they carried the body of her daughter to be buried in the Kadifekale Cemetery.

“Whatever torture he did to my daughter, may God give torture to him in the same way. I have never cursed anybody in my life, but now my heart is on fire, so let the heart of the mother of that killer also be on fire. Deniz will never die, more Denizs will come. I am so happy and proud that I am the mother of Deniz,” she said.

“How can you torture a woman like that? You fascist. Did you have any right to do all that to my daughter? May God curse you,” she said, in pain and agony, to the killer of her daughter.

Deniz Poyraz’s coffin was carried on the shoulders of women, who were continuously applauded and performed “zılgıt”, a Kurdish exclamation of rage or suffering.

Thousands of people, who welcomed Deniz Poyraz at the entrance of the neighborhood where her home is located, marched to the home of her family with the slogans of “Şehid namirin” (“Martrys are immortal”) and “Jin, Jiyan, Azadi” (“Woman, Life, Freedom”). 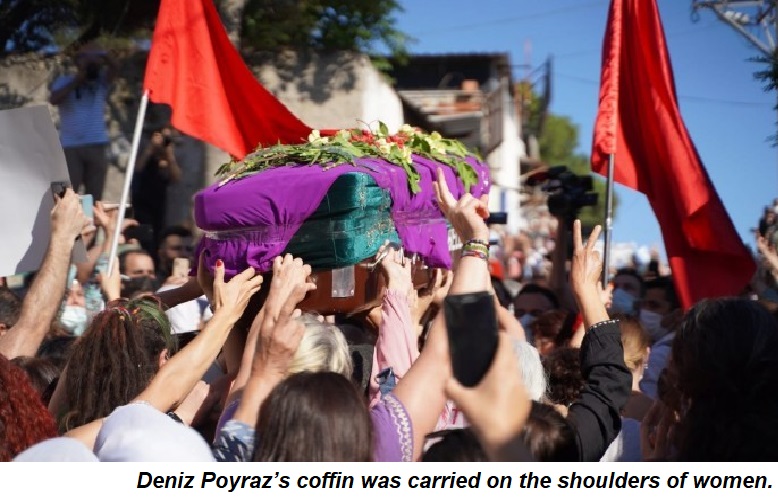 HDP  co-chair Pervin Buldan gave a speech stating her condemnation of the killing of Deniz Poyraz.

“Our pain is deep. We will bid our last farewell to our young friend. We, as women promise once again that we will carry the flag and the tradition that we have inherited from Deniz. We will never let the flag that she has left us to carry to fall,” she said.

“A horrible massacre happened in Turkey. Everybdoy should know that this is a preplanned attack by dark forces,” she added. “This is obvious seeing the numerous scandalous photographs of this killer, and also listening to the messages he shared in the police station.”

Buldan went on: “This killer has been sent straight to prison in the blink of an eye without further investigation to look into whether he had connections or not, whether he was ordered or not. Such a quick arrest of this killer without further questioning, without prosecutors opening an investigation to enlighen his connections show us clearly that this is an organised and planned attack.”

Buldan criticised the discourse of a “provocation” which have been repeatedly voiced by many governmental and opposition figures after the attack.

Ömer Çelik, the spokesperson of Turkish President Recep Tayyip Erdoğan’s Justice and Development Party (AKP) was also among those who defined the incident as a “provocation”. Turkey “would never allow such provocations to disturb its peace,” he said in a statement on Twitter.

“Don’t talk to us about ‘provocations’ anymore. This is not a provocation. This is an operation, this is a massacre committed against the Kurdish people and the HDP,” she said.

She continued: “Dear friends, we saw this massacre coming as we listened the president who was threatening us saying, ‘Worse days are to come’. The ones who cursed the HDP have motivated this attack.

“But we will not give up our understanding of democratic politics. We will bring democracy, peace and justice to this country. This we promise to our dear Deniz.”

CHP’s Mayor for Izmir Tunç Soyer also shared a speech. “These bullets were fired, not just at the HDP, not just at the Kurds, but at our togetherness, at our fellowship and our future. But we will continue our path together in fellowship. I wish to share my condolences with all my sisters and brothers who are here today,” he said.

İndividuals and activists from numerous civil society organisations and democratic movements also attended the funeral and all together, to bid a last farewell to Deniz Poyraz.