Friday marks the fifth anniversary of the beginning of Turkey’s “Olive Branch” military operation against the northern Syrian district of Afrin to push Kurdish fighters out. The operation displaced nearly 300,000 Kurdish inhabitants from Afrin.

Turkey’s pro-Kurdish opposition Peoples’ Democratic Party (HDP) on Friday called on the government to end the occupation of Afrin and the rest of Syrian territories it holds together with Islamist opposition groups.

Locals should be allowed to return to their lands and compensated for their losses over the five years the city has been under Turkish control, the HDP said in a statement.

Turkey launched Operation Olive Branch on 20 January 2018 together with factions known as the Syrian National Army (SNA), aiming to take control in the northwestern Afrin district that had enjoyed relative peace during Syria’s civil war until then.

The Syrian Democratic Council (SDC) noted that the region had been living through a tragedy since the beginning of Turkish aggression, adding:

“The city witnesses daily cases of kidnappings, murders, seizure of property, and looting of civilian homes, along with the unlawful torture of indigenous people in detention centres, all of which is added to the policy of Turkification in Afrin, its countryside, and all other occupied areas in northern Syria, where education was imposed in the Turkish language.”

SDC also called on international powers to “conduct independent investigations into the daily crimes and violations committed by the Turkish regime.”

United Nations war crimes investigators have pointed to kidnappings, torture and looting in Afrin by Turkey’s allies in various reports, and have been calling on Ankara to “use its influence much more to bring them into check”.

Turkey’s offensives displaced nearly 300,000 Kurdish inhabitants from Afrin, who, since then, have been taking shelter in Aleppo’s northern countryside, locally known as Shahba region.

Thousands of displaced people of Afrin and residents of Aleppo took to the streets on Friday to denounce the fifth anniversary of the Turkish attacks against Afrin. 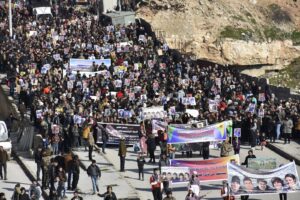