Halabja Massacre: The 34th anniversary of a genocidal attack on the Kurdish people

Thousands of Kurdish civilians who died in the chemical attack of the Iraqi Army on 16 March 1988 are commemorated.

Political parties and organisations under the umbrella of the Kurdistani Alliance Work Group made a joint statement on Wednesday in Turkey’s Kurdish-majority city of Diyarbakır (Amed) on the 34th anniversary of the Halabja Massacre, carried out on 16 March 1988 by the Iraqi Army in Halabja, Iraqi Kurdistan, which left thousands of civilians dead.

The statement was read in Kurdish and Turkish by representatives of parties that include the Peoples’ Democratic Party (HDP), the Democratic Regions Party (DBP), and the Communist Party of Kurdistan (KKP).

The statement stressed that the massacre was in fact ‘a massacre of the future of the Kurdish people’, and said:

“Today is the day that commemorates the genocide conducted by Saddam Hussein and the Baas regime in Halabja and other cities in South Kurdistan, as part of the Anfal campaign. Those who were responsible for this massacre were defeated by the determined struggle of the people.”

“On the 34th anniversary of the Halabja Massacre that killed thousands, mostly women and children, and wounded or left ill tens of thousands, we commemorate the victims of this attack with respect. We will continue to defend the rule of law and the right to live in dignity against all violations of human rights.”

In March 1988, the Iraqi Army carried out a heavy bombardment on the city of Halabja where 40 thousand people lived. Most of the fighters and men in the city took to the mountains, while women, children and old people were left behind.

A chemical attack followed. By the order of Saddam Hussein’s cousin Ali Hassan al-Majid, also known as “Chemical Ali”, warplanes dropped bombs with chemical munition on the city. More than 5,000 people died in the attack, almost all of whom were women and children.

Halabja massacre was part of the Anfal campaign in Iraq which was carried out against the Iraqi Kurds between 1986 and 1989.

The Iran-Iraq war, which was to last eight years had started in 1980 after the Shah’s regime in Iran was overthrown in 1979 by the Islamic revolution.

As Iraq’s dictator Saddam Hussein soon found out that he wouldn’t be able to have an easy victory over Iran as he expected, he turned on the Kurds and Shiites, designated ‘interior enemies’ in Iraq. The Anfal campaign was carried out between 1986-1989 and 100,000 (180,000 according to some sources) Kurds were killed.

It was upon an Iranian offensive in March 1988 that Ali Hassan al-Majid ordered use of chemical weapons against the Kurds. Eight Iraqi warplanes carried out the chemical attack on Halabja.

According to the figures of the United Nations, 6,357 people died in the attack, and 14,765 were severely injured.

The silence of the West

Although journalists reported on the tragic situation immediately after the attack, the Western states which had been supporting the Saddam regime throughout the Iran-Iraq war mostly kept silent over the massacre.

Only when Saddam Hussein occupied Kuwait in 1990 and began to present a threat for the control over energy resources did the West started talking about the Halabja massacre. The coalition forces, led by the United States, even tried to bring up the massacre as a mean of justifying the military attack against Iraq.

Ramazan Öztürk, a journalist who played a significant role in reporting on the Halabja massacre, recalls in a 2019 interview how the states of the West preferred to turn a blind eye on the massacre.

“Saddam, who had become the spoilt child of the West, never had fears about using chemical weapons in Halabja. Iraq used chemical weapons in the frontlines and in civilian settlements from the very first years of the Iran-Iraq war. The West always kept silent. Saddam was sure that this silence would continue in Halabja as well. He proved right.”

“When Saddam occupied Kuwait in 1990, the Halabja Massacre began to be covered in international media. Articles and reports were published as if it was a recent incident. Suddenly photographs of the massacre were in newspapers every day.” 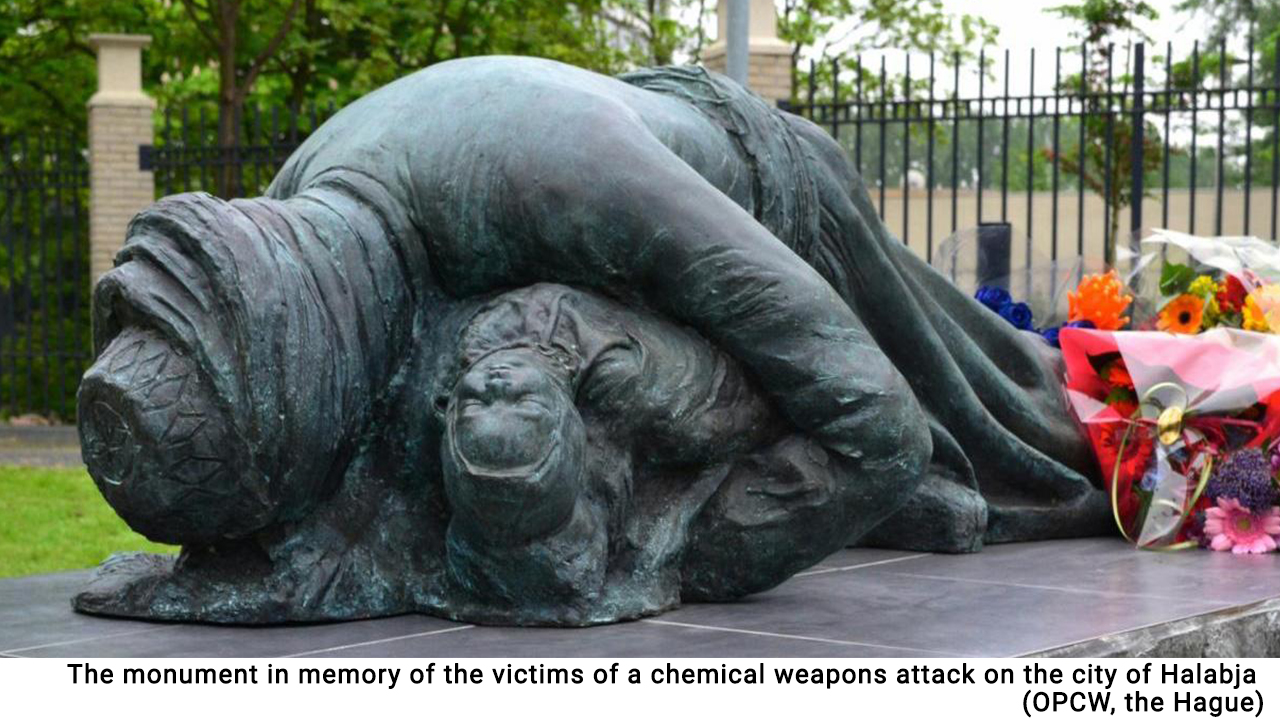 Öztürk is the journalist who took the photo of a father who died with his child in his arms, which became one of the symbols of the human suffering in Halabja.

The photo titled ‘Silent Witness’ was later placed, as the ‘Monument of the Halabja Massacre’, at the headquarters of the Organization for the Prohibition of Chemical Weapons (OPCW) in the Hague.