The recent filmed detention of a Peace Mother due to a scarf she held coloured "red, yellow and green" reminds us of the 1991 smear campaign against Leyla Zana after she appeared at the Turkish parliament wearing the same three colours in her hair.

As thousands of women from various cities converged on the meeting area in Diyarbakir (Amed), they were not exactly welcomed by Turkish police officers, who had taken extraordinary security measures at the entrances of the meeting zone.

During the body searches at the entrance points, some personal belongings of the women, even their own personal hygiene products, were confiscated by the police on grounds of these materials could be a “threat” to the “security” of the meeting. Among the items taken by the police, there were disinfectants, containers of hand moisturiser, notebooks and pens.

The scandalous treatment of women reached it’s highest level when the police officers tried to take away an accessory carried by a Kurdish Peace Mother, Hatice Beytur on the grounds that it had the colours “red, yellow and green”.

The 50-year-old was treated as a ‘dangerous criminal’ just because of the colours of the scarf she was carrying in her hands as tens of police officers surrounded her instantly. 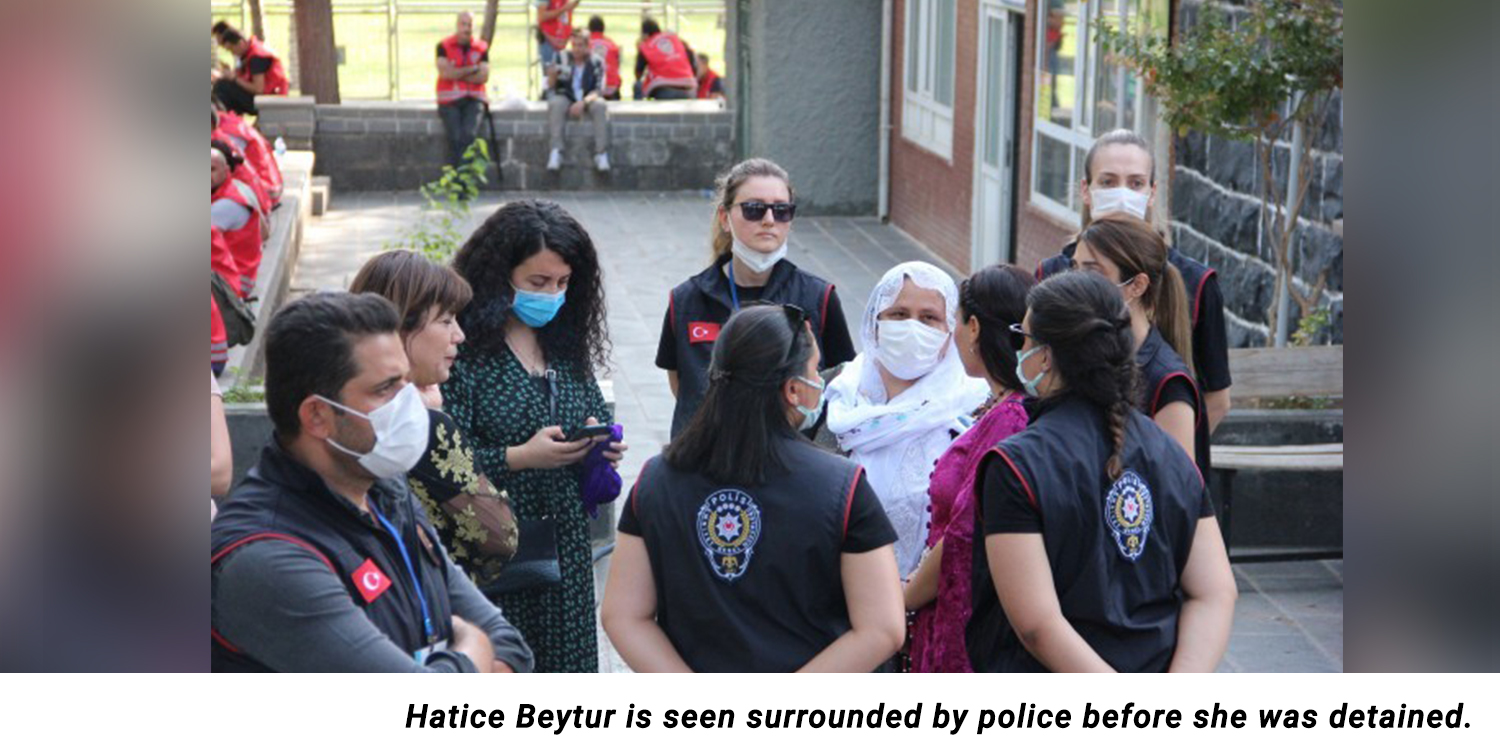 Even though the Peoples’ Democratic Party’s (HDP) MPs in the meeting tried to intervene with the police, she was physically detained and taken to the anti-terror branch of the police station.

After hours of detention, Beytur was released on Saturday.

“I was just holding a scarf, it was coloured red, yellow and green. There were no emblems or logos on it,” she told MA.

Despite her protests that she told the police she was not carrying an organisational flag or anything like that, she was still detained on grounds that she was ‘carrying a Kurdistan Workers’ Party (PKK) flag’.

“They call it a PKK flag when it was simply a scarf of three colours.”

The Peace Mother also shared the shocking humiliation she was exposed to during police custody.

“Why do you carry such flags? Let’s give you Turkish flags and you can go and join the sit-in protest, in front of the HDP office,” the police told her.

“A mother of ours is being detained because she carries the colours red, yellow and green. This is a picture of Turkey in 2021. Hostility against Kurds also requires hostility against their colours. The law enforcement have not freed the mother after two hours despite all our efforts. Just because she carries a headscarf, the prosecutor has now issued a special order.” said Meral Danış Beştaş, HDP’s parliamentary group’s deputy chair, criticising the incident while it was happening staying by the side of Beytur while she was being detained by the police.

The treatment of the Peace Mother recalls the relentless persecution of even the colours of the Kurdish people, especially exemplified by the treatment against the well known Kurdish politician, Leyla Zana, a former MP from the People’s Labour Party (HEP), the first pro-Kurdish party in Turkey when she walked to the podium of the Turkish parliament in November of 1991 to take her parliamentary oath, wearing the colours of “red, yellow and green” in her hair. 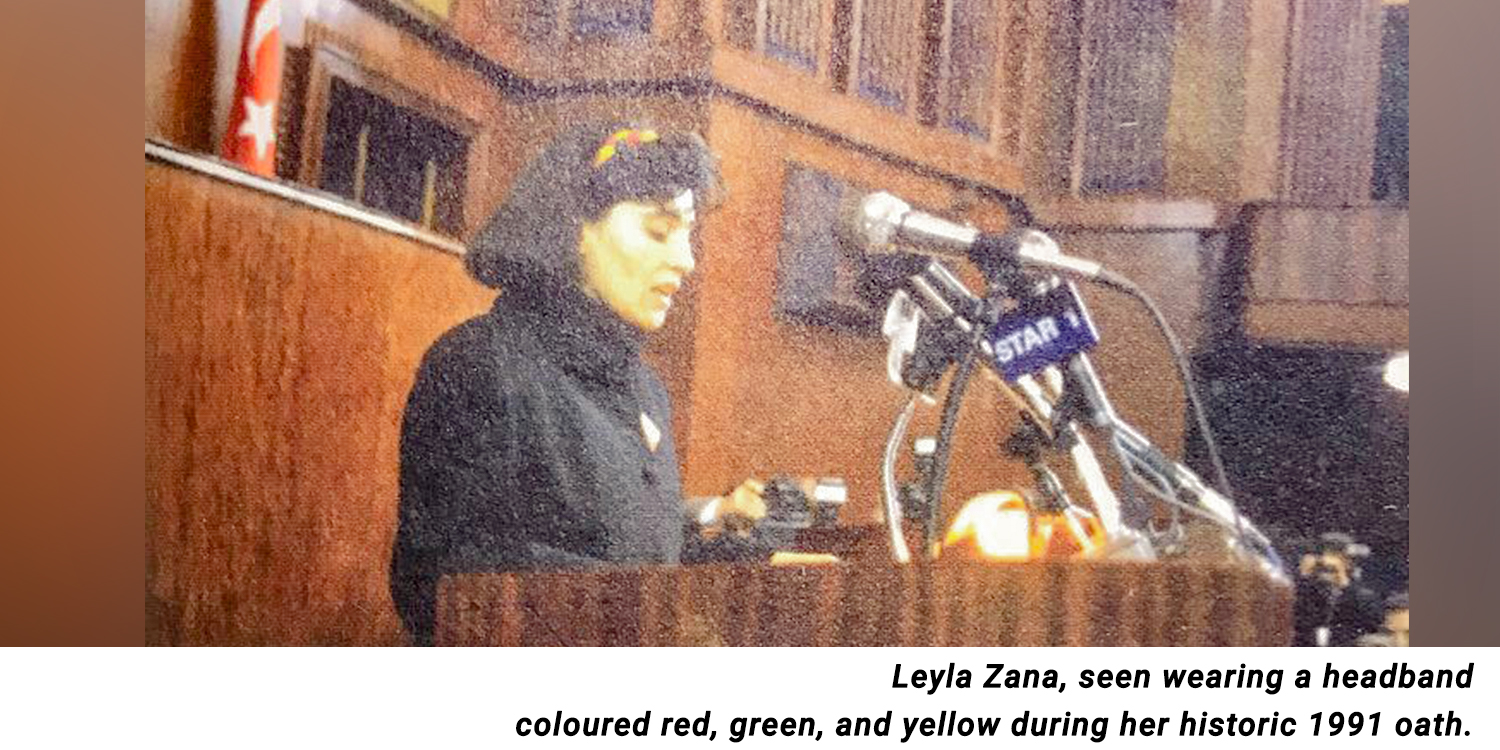 Many of those enraged by this act mistakenly believed that these were the colours of the PKK and the Ankara State Prosecutor, who drew up the indictment against Zana, was among those who reacted strongly to the incident.

The Turkish authorities’ perception of the three colours of, red, yellow and green, does not seemed to have changed since 1991, as they are still perceived as representing a “crime” despite their cultural meanings for Kurdish folklore and history.

These three colours, red yellow and green are known as “kesk u sor u zer” in Kurdish and associated deeply with Kurdish culture and many Kurds living in different countries wear these “Kurdish colours” as part of their traditional clothing.

These three colours also appear in the flag of the Kurdistan Region of Iraq that was adopted in 1946 by the Republic of Kurdistan at Mahabad, the first independent Kurdish republic founded in Iran, as the official flag of the Republic.

Generally, the colour red is seen to symbolise the blood of those who have fought and died for Kurdish freedom, while the green symbolises the beauty of Kurdish nature with the yellow symbolising the sun and the source for all life.

Following these historic background, the flag is widely adopted in Kurdistan and has been raised by various Kurdish movements and entities in all sectors of the land, according to Paris Kurdish Institute.