Forty-six-year-old Gulbihar Esad Ali graduated with a first class degree from Rojava University in 2018, and is now a member of the teaching staff at the same university.

Gulbihar’s first teacher in Kurdish language and literature was her father, and her passion for Kurdish goes back to her childhood. Her father, an open-minded religious scholar who mastered Turkish, Ottoman and Arabic, moved from Turkey to Rojava. He loved his people deeply and had a great interest in Kurdish language and literature. Gulbihar’s brother was the first to follow his father’s path.

The family was determined to preserve their language and culture under the Baath regime’s oppressive policies against Kurds. In her youth, with the encouragement of her brother, Gulbihar and a group of young people in their neighbourhood went so far as to publish a Kurdish magazine called “Aso”. But during a later series of brutal house raids by the forces of the regime, all the magazines were burnt, for fear of punishment if they were found.

Gulbihar tells of her school years under the Baath regime: “It was really hard for us to learn Arabic at the state school we went to. We loved it when we could read in our own language. It was easier, but it also aroused a special feeling in us. I remember this: I couldn’t learn any Arabic in the first three years I went to the Arabic language school. There were not many Arabs in our community, there might not even have been two families; they were all in the one neighbourhood in Qamishli (Qamishlo). I learnt some Arabic in year 4. After that my grades were good, and I developed my Arabic well.”

Gulbihar explained the process of realising her identity was different, she was Kurdish: “In middle school, that is, in years 7, 8 and 9, our class began to become more aware of our identity, and we realised that we were foreigners in the school. We went to school in military-style uniforms, and the system forced upon us at the school made us feel as though we were in a military battalion,” she explains. 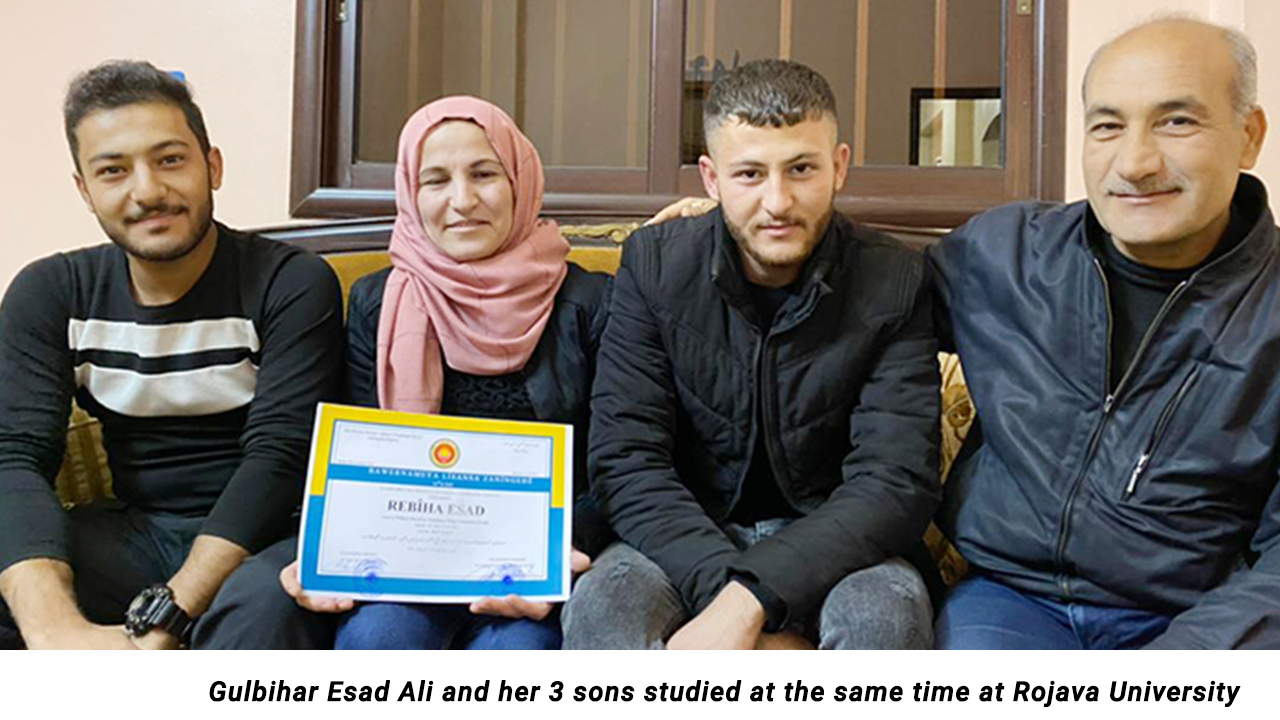 She says that she was very happy when she learnt that a Kurdish language university was to open in Northeast Syria, and also that her husband was a great support in her attending university. “When I went to Rojava University there were people younger than me there, of the same age as my children. There were older people too. We were delighted to be studying in the Kurdish language.” She also says they had to struggle against community pressure: “In the beginning I wondered what the community, and my husband’s family would say. My husband was a great support to me in this. My children were pleased and supported me too. It was with their support that I started university. My dreams had come true.”

Gulbihar says she went to university summer and winter for two years without missing a day, that they completed a four-year course in three years, and that after graduating, she stayed on at the university with three or four friends. She now works at the same university, and her aim is to take a masters degree.