Fifty British MPs from different parties in the UK Parliament have signed a joint letter to the British Foreign Secretary, Dominic Raab calling on the British government to take a more critical stance in relation to the deteriorating human rights situation in Turkey.

The 50 MPs urged the UK government to join US President Joe Biden’s administration in taking a more vocal stance criticising Turkey. The letter is signed by members of different parties of the UK parliament and headed by Conservative MP Crispin Blunt and for the Labour Party, Hilary Benn, former Shadow Foreign Secretary from May 2015 to June 2016.

It is the first time that such an all party message of concern of the UK government’s seemingly uncritical stance to the Turkish regime has been voiced by so many members of the UK parliament.

In January 2017, the British Prime Minister Theresa May welcomed the Turkish President Recep Tayyip Erdogan to the UK with open arms, sending police horses and dogs against Kurdish protestors at the gates of 10 Downing Street.

Behind the iron gates of Downing Street, while the police were attacking Kurdish protestors, the UK Prime Minister discussed a £100 million defence deal signed with the Turkish president Erdogan. Theresa May said: “It marks the start of a new and deeper trading relationship with Turkey and will potentially secure British and Turkish jobs and prosperity for decades to come”.

The UK has been the closest ally of Turkey and the appointment of the ex-ambassador to Turkey Richard Moore to head the UK’s MI6 secret services only underlines how important the UK sees it’s relationship with Turkey.

As many political observers and analysts have concluded, the Conservative government has completely closed its eyes to Turkey’s repressive policies against the Kurds, its reported ‘occupation’ of Afrin (using its sponsored and supported militias there), its invasion of Iraqi Kurdistan and the hundreds of documented crimes that the Turkish state has carried out against the Kurds. It reportedly remains silent even in relation to Erdogan’s brutal repression of the Peoples’ Democratic Party (HDP) and the media.

The opposition in the UK parliament has also been historically relatively quiet as well with regard to raising issues of human rights, freedom of expression and lack of democratic governance in Turkey, so human rights and so pro-Kurdish rights campaigners have welcomed the joint letter.

“It is very late in the day but it is good to finally see that all the campaigning and solidarity work that is being done by a lot of people outside the UK parliament is finally bearing fruit inside the UK parliament. The UK government under Margaret Thatcher shamefully supported the White Aparthied regime of South Africa and this Conservative government under Boris Johnson is doing the same to the racist dictator of Turkey. It is shameful and must stop. We demand that the UK government stop all arms sales to Turkey and use its offices with the Ankara regime to pressurise Turkey to seek a peaceful negotiated dialogue with the Kurdish movement to bring an end to decades of destructive war and injustices towards the Kurds”, said Mark Campbell of the Kurdistan Solidarity Campaign. 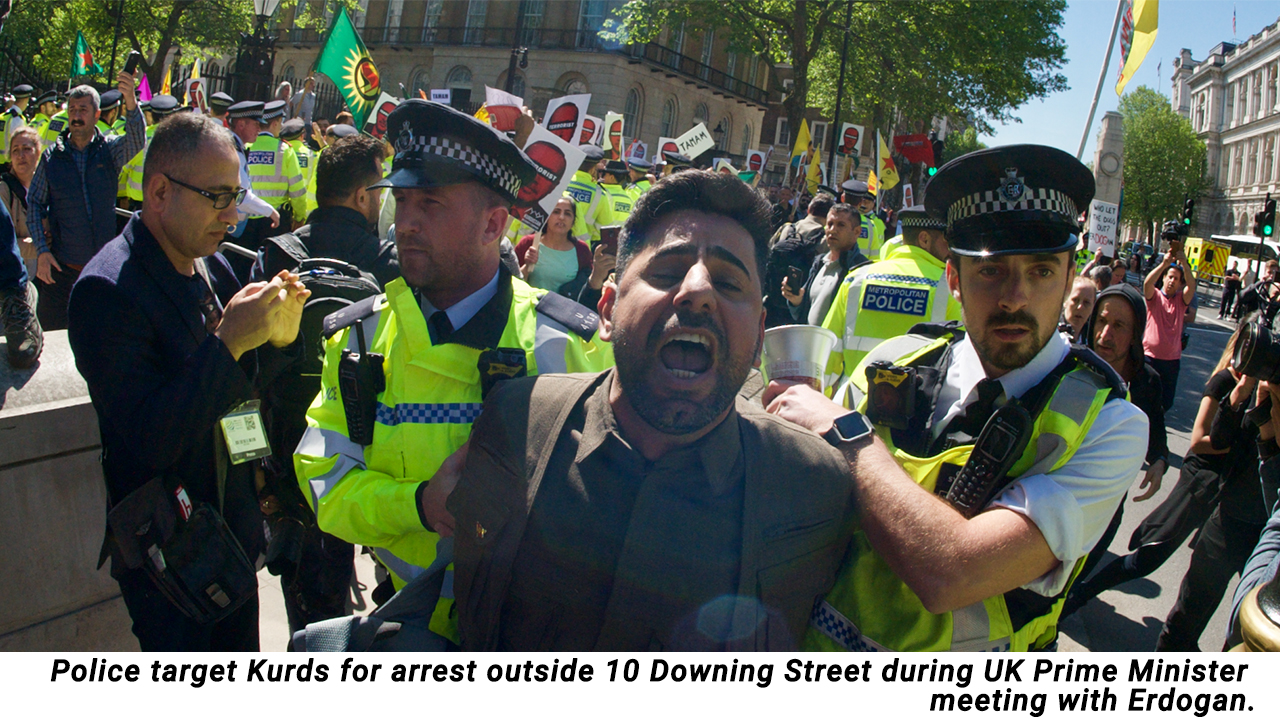 The MP’s letter heading is ‘Britain’s relationship with Turkey’ and it recognises that this relationship is an important one for the UK and that Turkey had in ‘recent decades’ been making important strides towards conformity with laws, values and attitudes to human rights with that of its European partners. But over the last decade, it states that “this progress has gone in sharp reverse under President Erdogan’s leadership and we are writing to ask the Government to take a more active stance in seeking to prevent human rights violations in Turkey.

“The imprisonment of journalists, the suppression of democratic political opposition and the recent wave of intimidation of human rights defenders needs to be addressed, not least in Turkey’s own interests, by showing that there is a cost for doing the wrong thing”.

The letter also draws attention to the recent lifting of parliamentary immunity and imprisonment of HDP’s Omer Faruk Gergerlioglu for a social media post which the letter says “calls into question whether Turkey actually shares our democratic values and attachment to the rule of law”.

“As Parliamentarians, all of us should be worried by the imprisonment of MPs, not least those who have been working for the human rights of all parts of Turkish society. The ideal of a future in which Turks and Kurds, the religious and the secular and the rich and the poor could work together to respect the right of others and minorities is now in danger of being destroyed by the growing oppressive domestic polices of the Turkish government. The very institution of democracy is under grave threat”, it states.

The letter concluded with a call to the UK Government: “We request that you make an early statement to Parliament, making clear to the Turkish government that the United Kingdom’s public friendship cannot be unconditional and that we will always stand up for human rights. The UK’s many friends in Turkey would welcome and draw strength from such a statement of Britain’s position as they work to restore a properly open society”.