‘Feminist Night March’ in Istanbul: The marchers destroyed the borders of political polarization in Turkey

Women’s organizations in Istanbul, Turkey, had announced their annual ‘8 March’ International Women’s Day ‘Feminist Night March’ for the 19th time, but the Turkish police blockaded all areas leading to Taksim Square following the Istanbul Governorship’s 8 March announcement that all roads and streets leading to it were to be closed due to the planned march and protest.

Women from Istanbul called upon marchers and protesters to meet at Siraselviler Street near Taksim Square by 6 pm. However, two hours before the protest march was due to commence, all entrances to Taksim Square and its surrounding area was closed by the police. 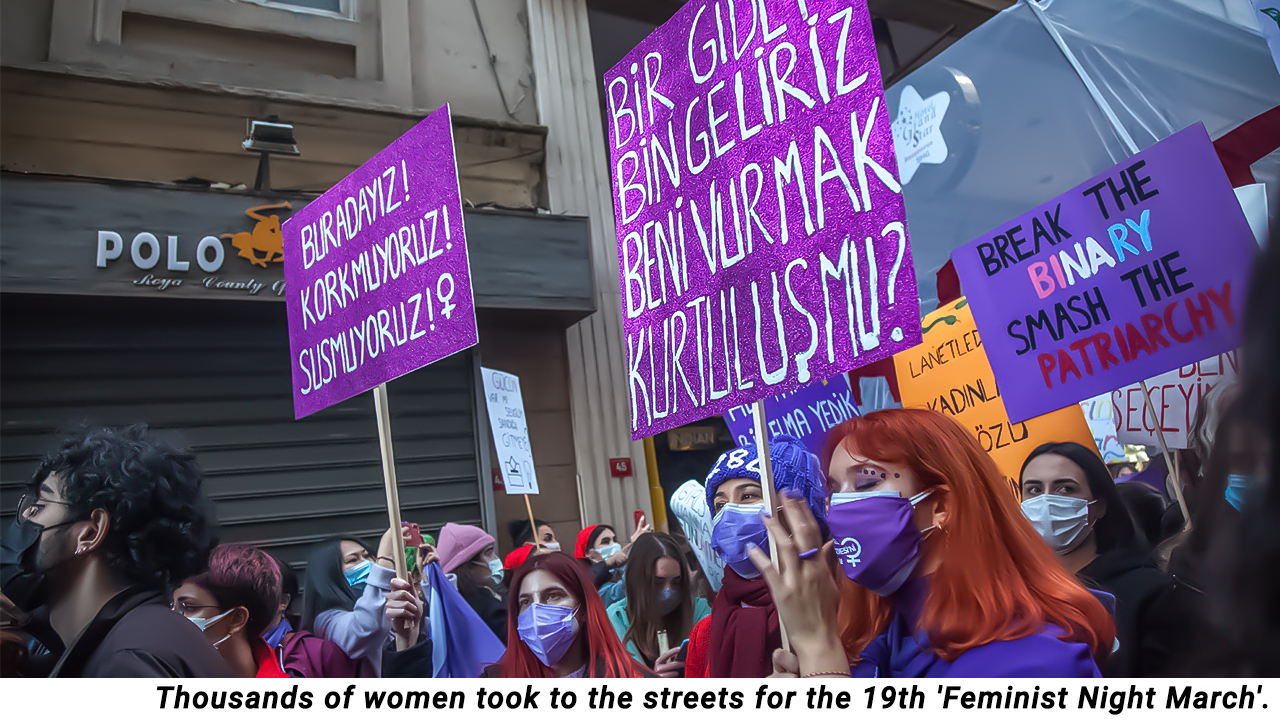 Despite these police actions, from the small side streets, women and LGBTI marchers managed to find their way to Siraselviler Street singing songs and chanting slogans. Thousands of women and LGBTI protesters managed to gather in Siraselviler and continued until 8 pm with their protests on this long narrow street, which became the scene of the most crowded public street protest Istanbul – actually, the whole country – has witnessed for a long time (excluding, of course, the Boğaziçi protests which have mostly taken place within the campus of the university). 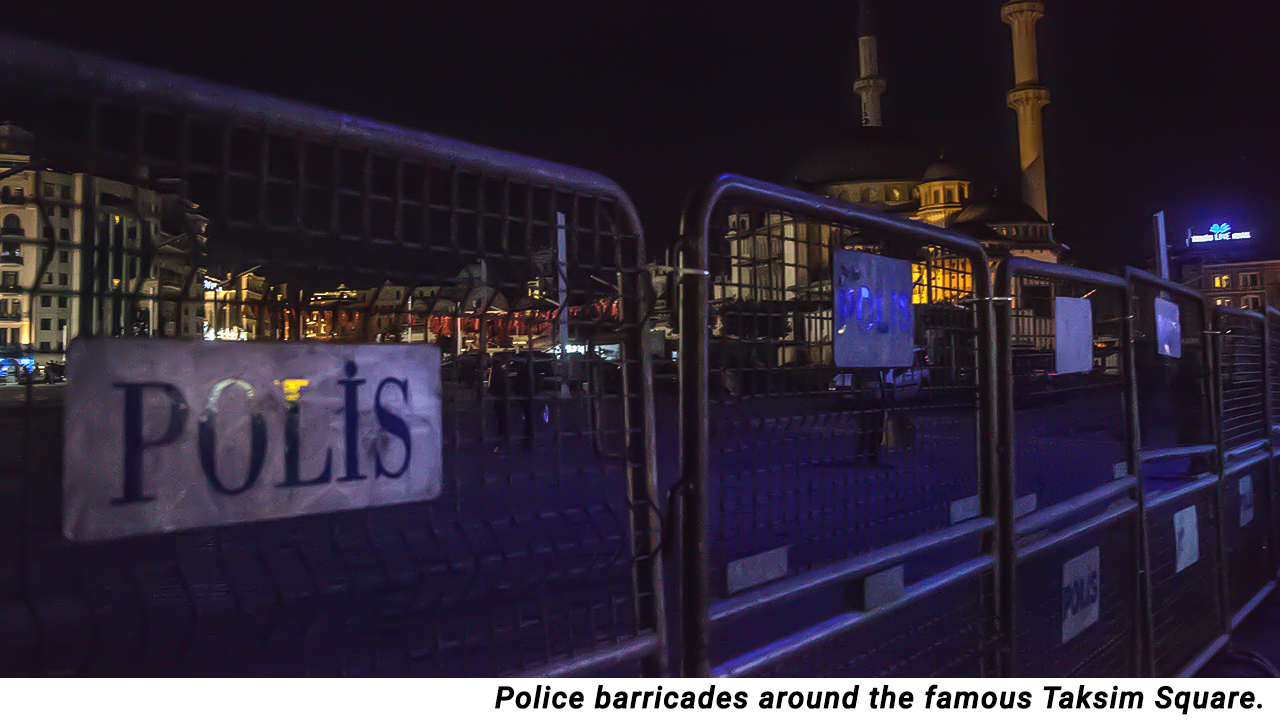 The Kurdish Mothers were also in attendance wearing their traditional white scarves. Banners in Turkish, Kurdish, Armenian, Arabic and English could be seen everywhere. The most visible banners were also those condemning the killings of women and the sexual violence against women. 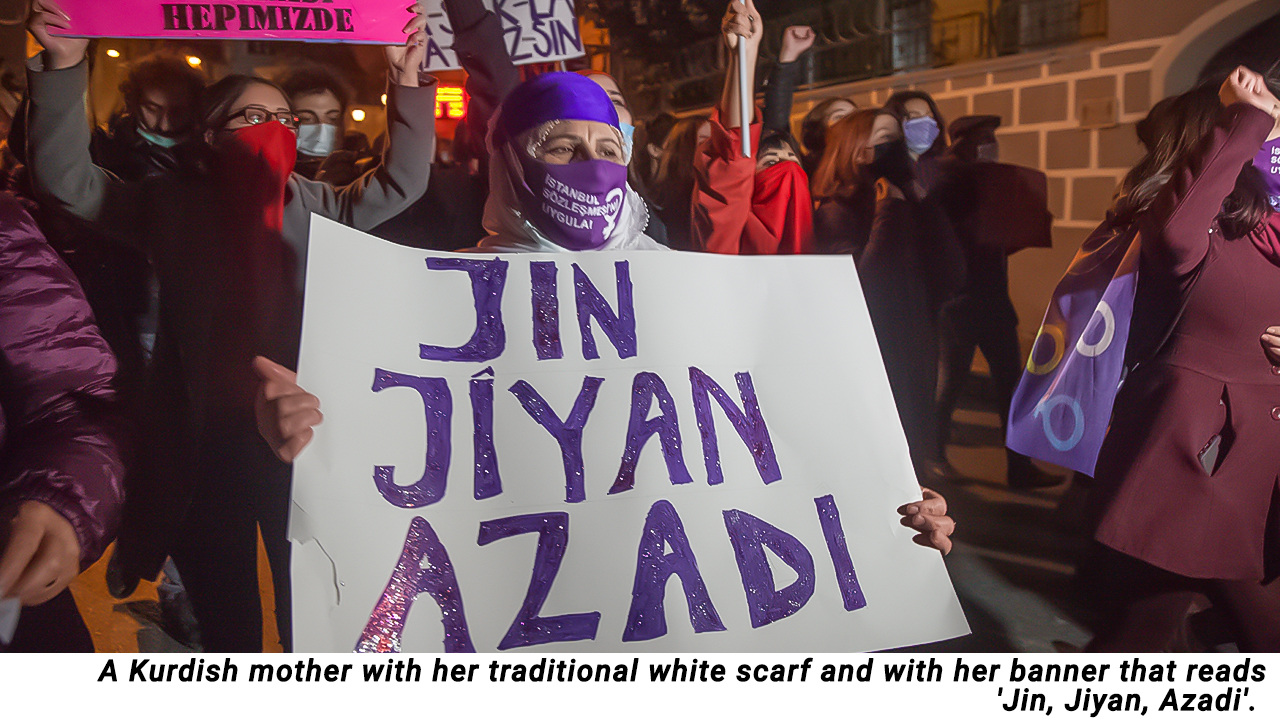 The police maintained strict barriers preventing access to Taksim Square or Istiklal. The women marched through Karakoy, and some women insisted that the march should proceed on Istiklal Street. Women stood against the barricades at Siraselviler Street for about an hour despite the continuous police announcements from police cars that stated: “Your press statement is over, disperse the area immediately!” The women stayed at the barricades even as large TOMA (water cannons) were in place to attack the women any moment. 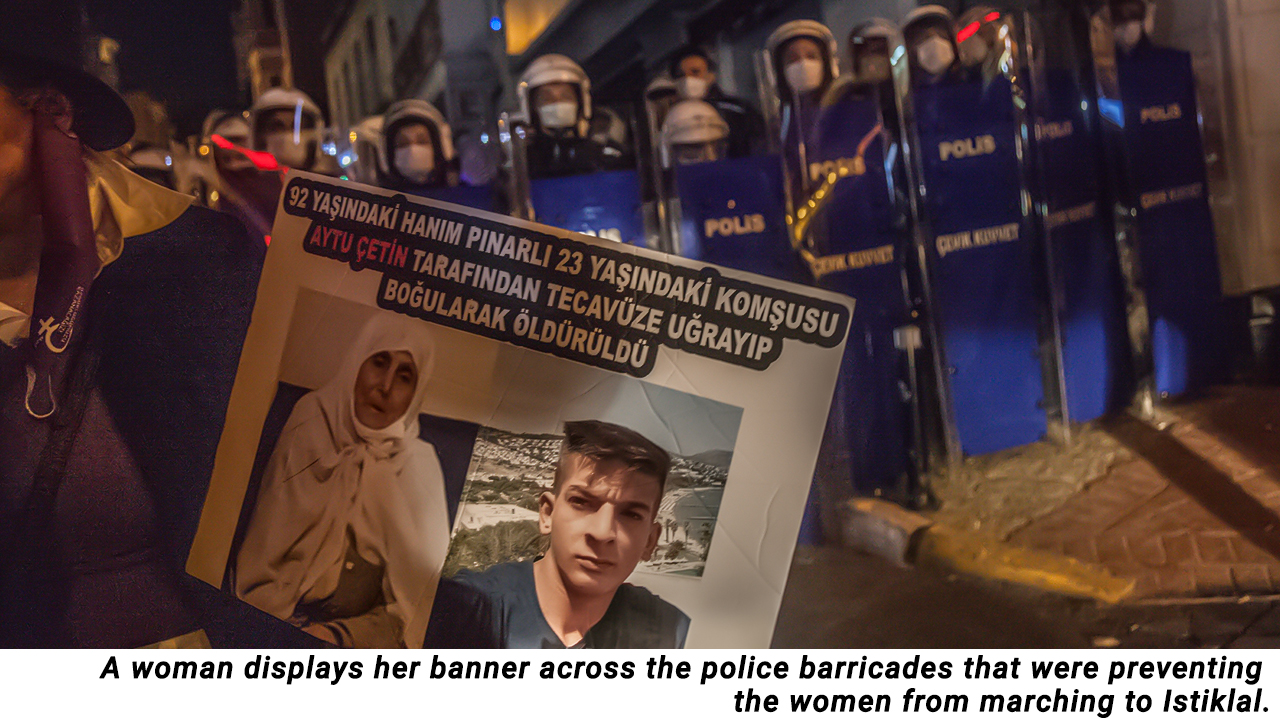 The police also surrounded the women who marched to Karaköy later on in an attempt to stop their march and ruin the unity of the protestors, but the women and the LGBTI who remained together, shoulder by shoulder, eventually broke the blockade and marched for a while longer in the direction of Galata.

The women did not walk in the Istiklal this year, but amidst the pandemic restrictions and over excessive police measures, what should be seen here is that the women and the LGBTI in Istanbul were able to continue a tradition of resistance by gathering for the ‘Feminist Night March’, which is a symbol for the women’s struggle not just in Istanbul, but throughout the country. It has been motivating and empowering all women within the country and internationally: Turkish and Kurdish women in the diaspora and in exile, for example, follow the ‘Feminist Night March’ event very closely.

‘Jin, Jiyan, Azadi’ was continuously chanted by not just Kurdish women but a vast majority of those present

The political climate of Turkey – which, as recognised by many, has long been defined by the polarisation and radicalisation of a wide range of ideologies – has been enflamed by the actions of the ruling regime. Turkey’s President Recep Tayyip Erdoğan has been mostly criticized by the opposition for his ‘polarising discourse’ against the Kurds, against women, against the LGBTI, against students, and against almost all dissenting citizens in the country.

Such solidarity between the various social and political groups of women and the LGBTI at the 19th ‘Feminist Night March’, therefore, should be seen within the context of this type of political turmoil in the country, which has been recently further polarised by the “terrorism” discourse and the increasing “homophobic” discourse that has been raised over Turkey’s cross-border operation in Iraq and the massive Boğaziçi University protests in Turkey, respectively. 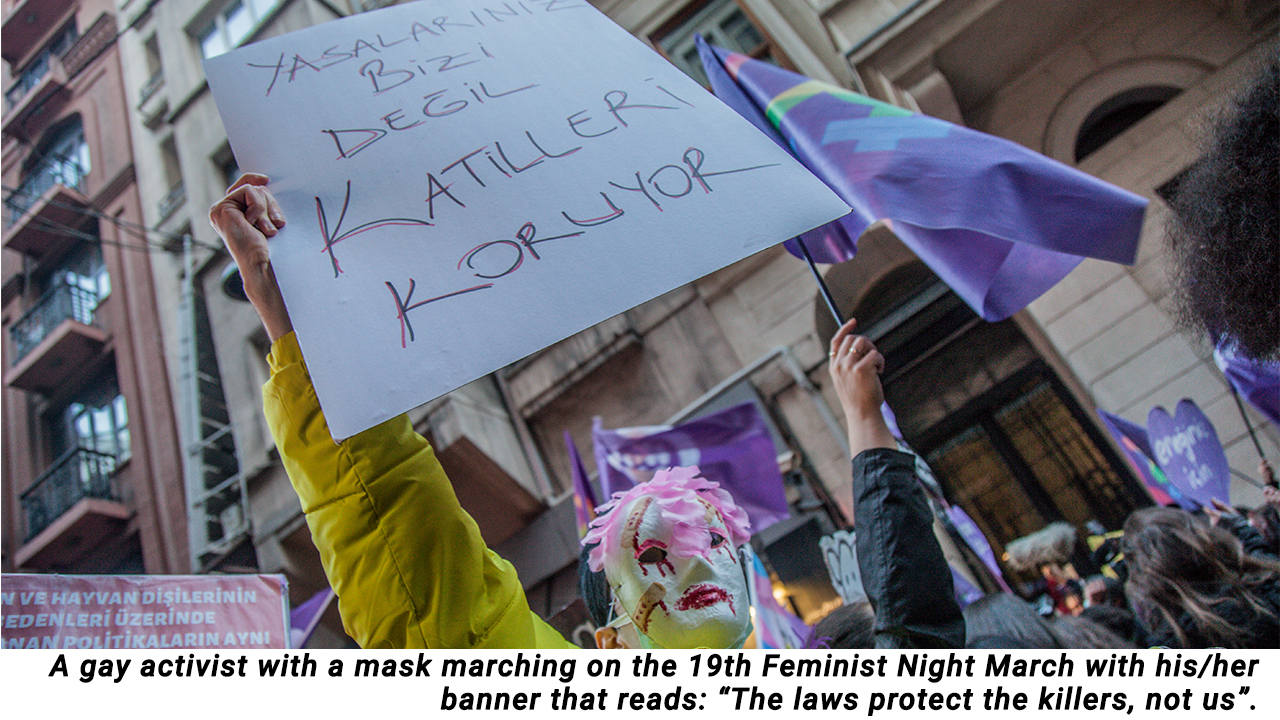 The massive and colourful rally in Istanbul, which united women and people of different ethnicities and sexual orientations, as well as people speaking different languages, created a rich political environment and platform for some of the most-marginalized communities in the country. The ‘Feminist Night March’ enabled positive and unexpected encounters and cultural crossings to take place.

One very important phenomenon was that the LGBTI and the Trans community were visible and present everywhere during the course of the march and demonstration. 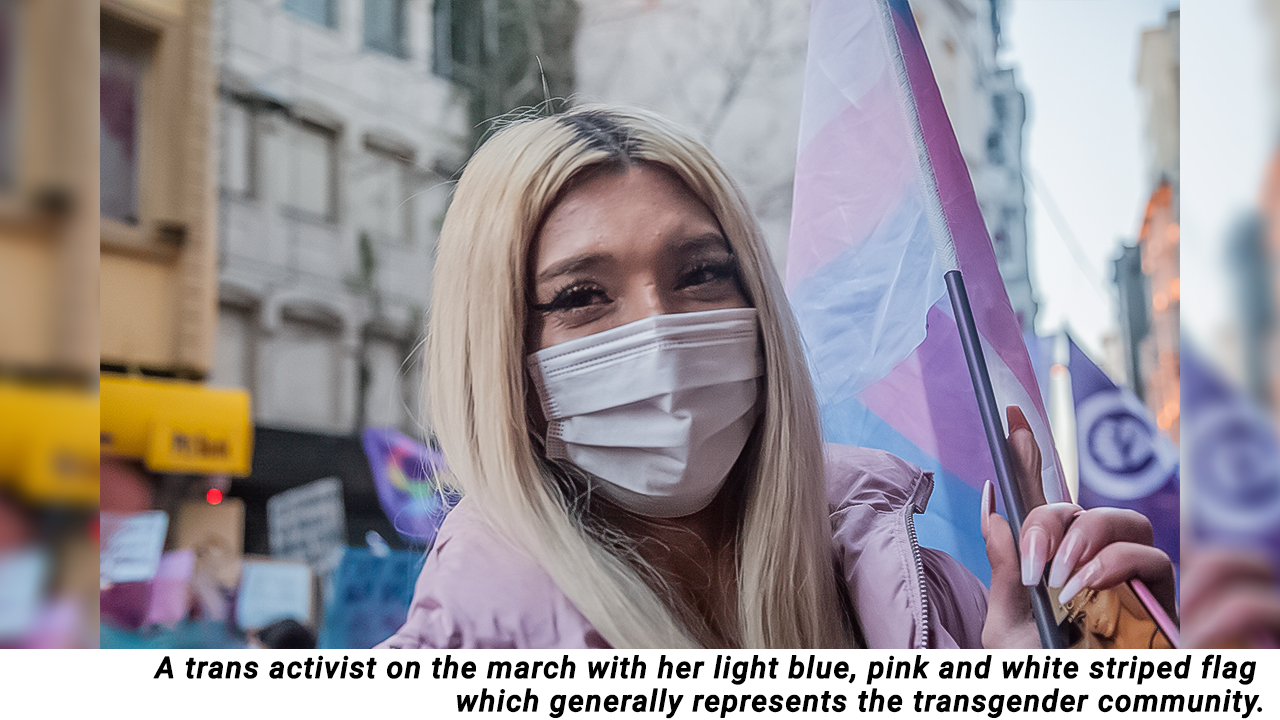 A trans activist who shared her reasons for attending the march stated that she was “honoured to be a trans. I am proud of my identity. I am happy with who I am and I am here to celebrate who I am. All the transphobics will just have to deal with the fact that trans are not going anywhere”, she said.

Kurdish women and the Kurdish Mothers were also visible everywhere and actively participated in the march and protests. 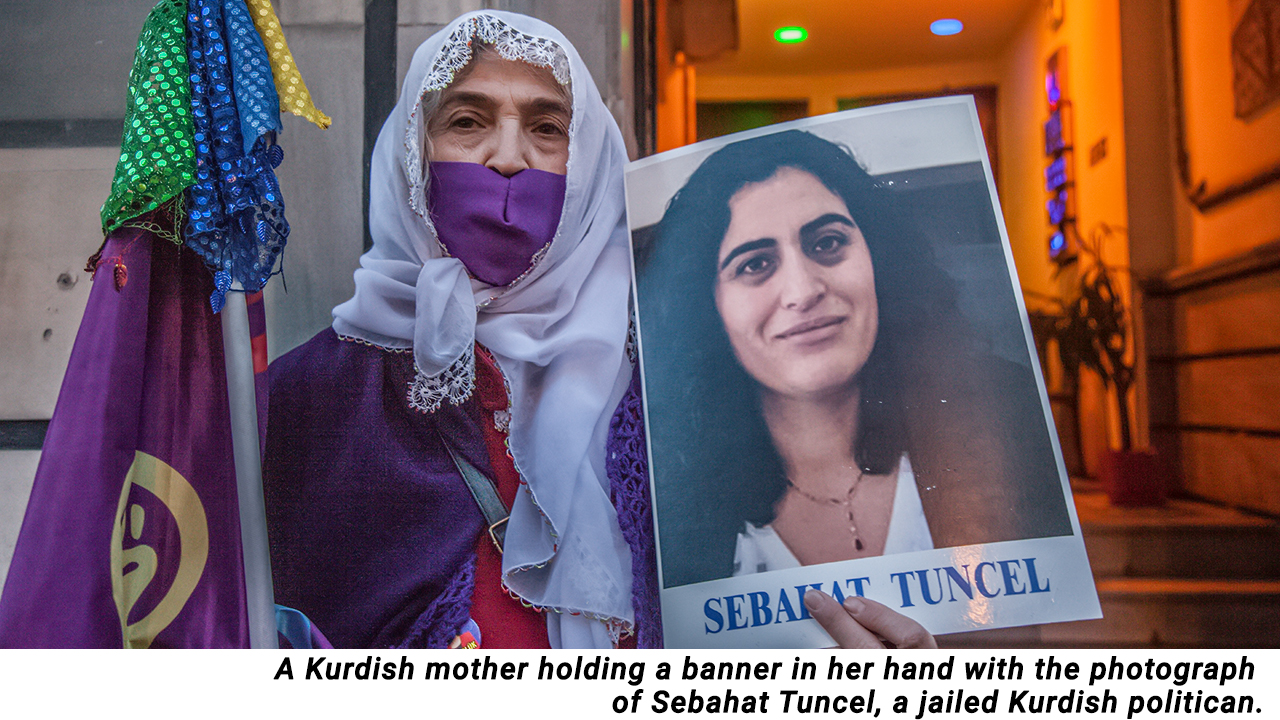 A Kurdish Mother was happy to be present at the march with her Sebahat Tuncel banner. When Medya News asked her what motivated her to be present at the march and demonstration, she said: “We resist against all the pressures that are targeting us. They have jailed our politicians, but we are proud of them. Of course, we carry these banners: these banners represent our free will. These women on these banners represent the resistance of the Kurdish women”, she said.

One could see Kurdish banners almost everywhere during the march and the Kurdish slogan “Jin, Jiyan, Azadi” (“Women, Life, Freedom”) was continuously chanted by not just Kurdish women but a vast majority of those present as they marched and demonstrated. In its essence, the 19th ‘Feminist Night March’ has shown the popularity and universality of the Kurdish slogan “Jin, Jiyan, Azadi” amongst the women and the LGBTI in Turkey who embraced “Women, Life, Freedom” together.

As the thousands of marchers proceeded with their celebrations, protests and demonstrations, one could see Kurdish mothers with white scarves alongside trans activists and people holding LGBTI flags: they all flowed like a river, moving alongside each other. 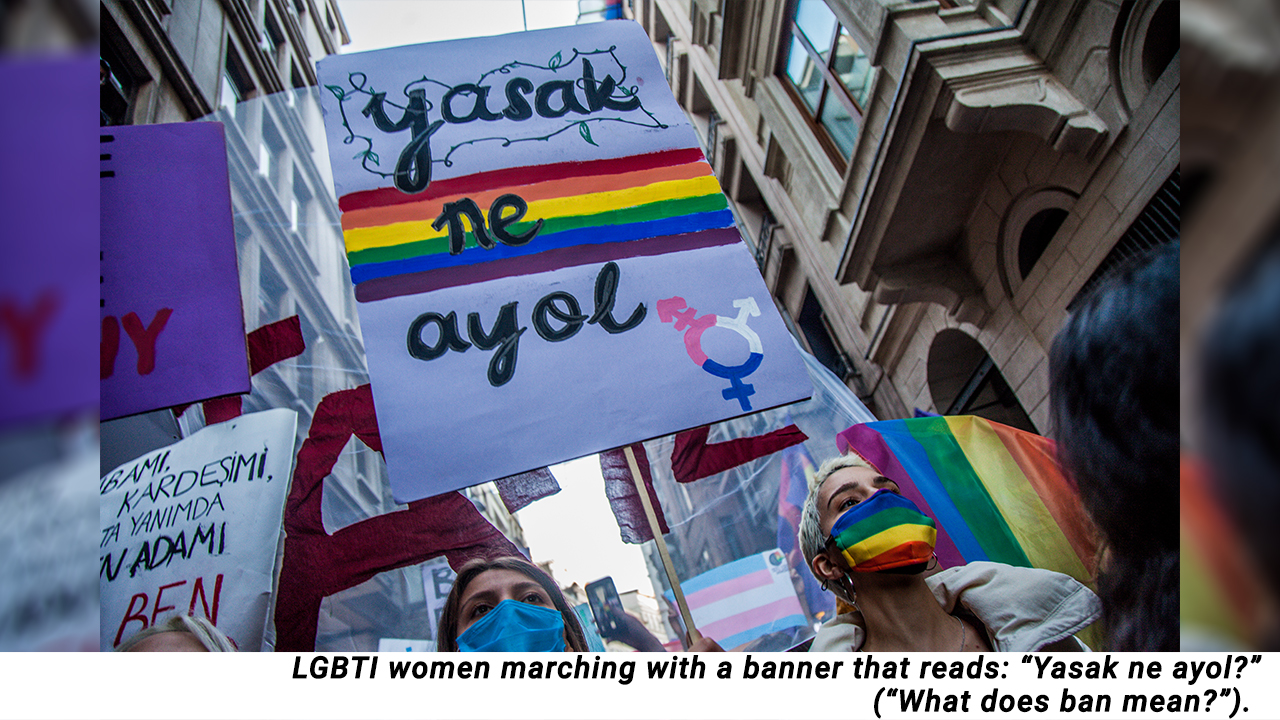 No woman terrorized the other, no woman marginalised the other, and vice versa: those present allowed each other to share their voices as they supported each other’s chants and statements and appeals. When a woman or an LGBTI person began to chant a slogan, everyone around them began to chant the same slogan. They did not interrupt each other but joined in the calls, slogans and voices of each other, helping to strengthen the voice in each call, slogan or statement. 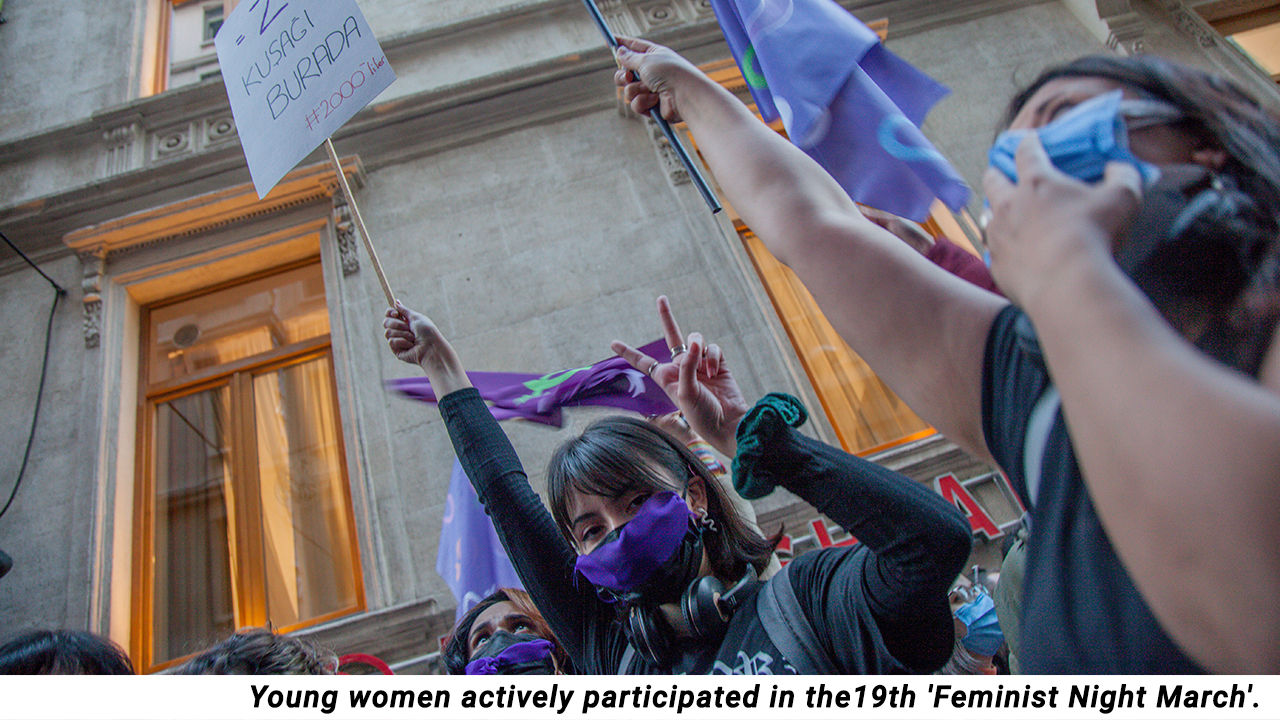 Young women actively participated in the march. Medya News spoke to a young woman holding a ‘Generation-Z’ banner. She said: “They are afraid of our generation, because we do not obey them. As young women in Generation Z, we want to show that they are right to be afraid of us. Now and here, the Generation-Z women celebrate 8 March: we are actively protesting in the streets and we will not be silenced”.

Women and LGBTI’s marched with their own beliefs, their own political discourses, their own demands, their own appeals. The women and the LGBTI’s allowed each other to gently express their voices freely. They embraced each other in such a way that that no one sought to dominate the other. 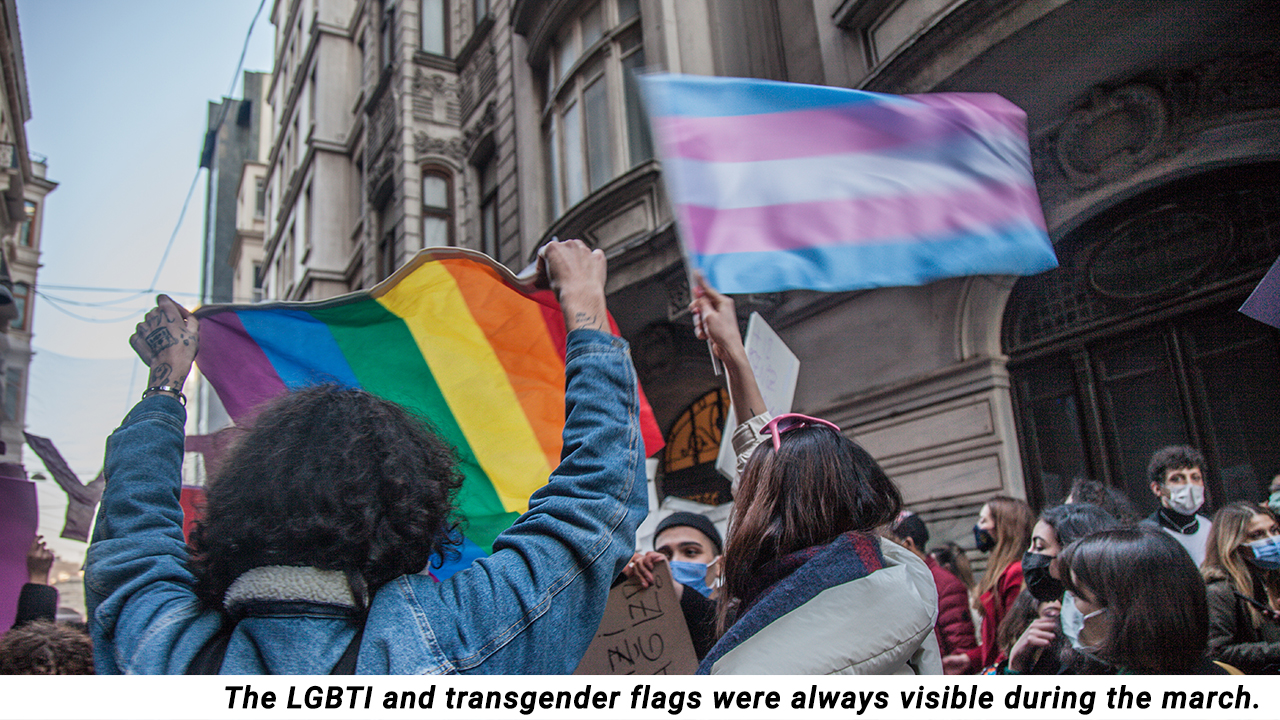 After the ‘destruction campaign’ that has been waged against the pro-Kurdish opposition Peoples’ Democratic Party (HDP), women of the HDP who were carrying their banners of the jailed HDP politicians and co-mayors were embraced by many women and LGBTI marchers.

Women asked each other: “Can I carry that banner for a while?”. Different marchers took turns voluntarily holding up many banners, including the ones that related to Sebahat Tuncel and Gültan Kışanak. “Justice for everyone” campaign slogans of the HDP were visible on the facemasks of some women as they marched. 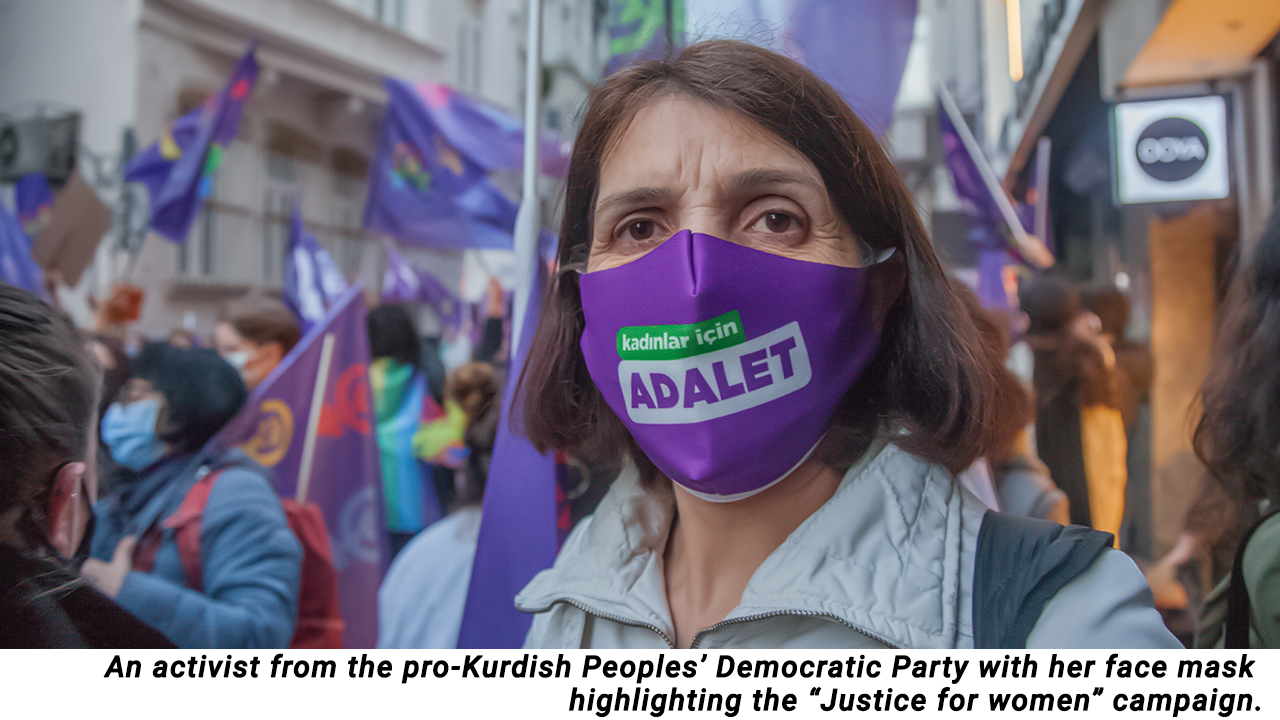 A particular moment worth remembering was when Kurdish women and tambourine players began a traditional “halay” dance. The HDP co-chair Pervin Buldan was amongst the women who danced the halay. Several women from different ages, ethnicities and sexual identities danced in a circle together. As they danced in the circle, Kurdish slogans and LGBTI slogans were chanted.

Anti-LGBTI and anti-Kurdish discourses did not break the unity of the women’s struggle in Istanbul on the night of 8 March. Clearly stated, the march was radically anti-racist and anti-homophobic in its orientation.

Different slogans were chanted and supported during the march. Some political slogans, clearly anti-government in nature, dominated the march from the beginning to the end. They included the following ones that referred to Turkey’s president: “Tayyip – run, run, run: women are coming!” and “Jump, jump: who doesn’t jump is Tayyip”. Resistance to the government was clearly expressed by these slogans expressing a clear stance against the government. 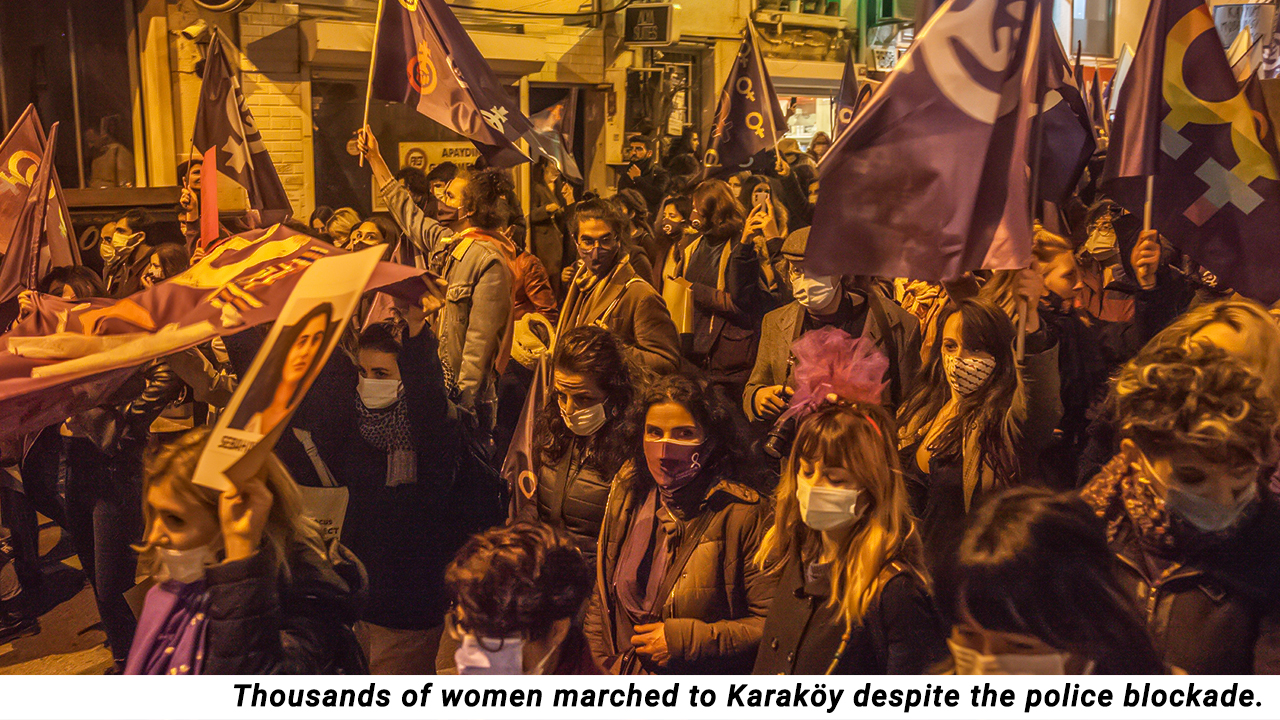 Another slogan that was heard quite often was: “Where are you my love?” The marchers musical response to this was: “I am here, my love!” It embodies the historical declaration of the revolutionary leader Rosa Luxemburg: “I was, I am, I shall be!” in a new language, in a new form. This slogan is a popular one used in LGBTI protests in the country and it was mostly recently heard at Pride. Having been subjected to a smear campaign by the Turkish government, especially after the Boğaziçi protests, and having been subjected to hate crimes in an increasing manner, the support and LGBTI solidarity extended by the marchers against homophobia was evident. 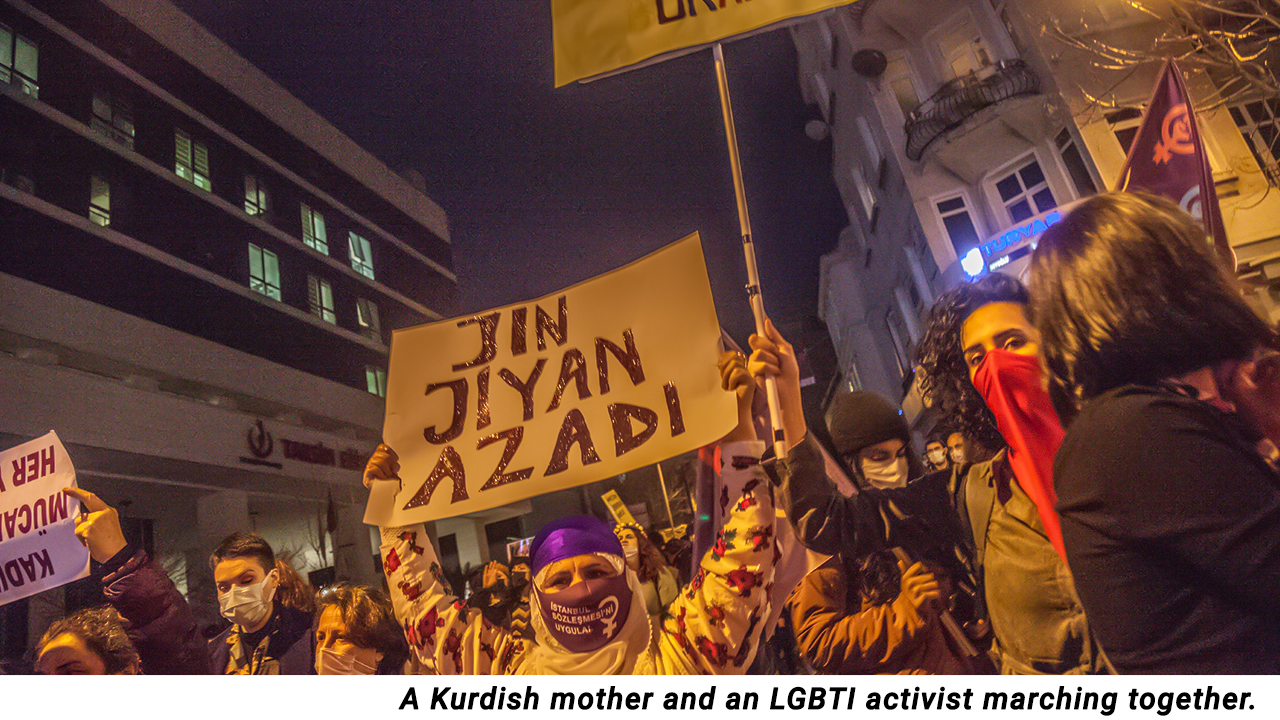 “Ay mother, long live my girl!”, a trans protestor greeted a Kurdish mother who was carrying a banner in Kurdish. An LGBTI activist woman then came and also greeted the mother and asked if she could be photographed with her. They hugged each other and raised their banners together. One said ‘Jin Jiyan Azadi’, the other ‘The people of Lut are here’.

What you see in this picture is more than two women. You can see a Kurdish and a Turkish woman, you can see two women of two different political struggles, you can see a mother with a ‘scarf’ and a young woman who raises her opposition to the homophobic discourse mainly raised by the religious authorities in Turkey as they give reference to “Lut/Lot” people to highlight how these authorities religiously seek to condemn homosexuality. The womens embrace represents the very capacity of women in Turkey to break free of stereotypes assigned to them and destroy the borders of political polarization in Turkey.