On Tuesday and Wednesday, MEPs attending the parliamentary session in Strasbourg got the chance to meet with exiled co-mayors from the Peoples’ Democratic Party (HDP) from the metropolitan cities of Van and Diyarbakir.

Bedia Özgökçe-Ertan was elected as Mayor of Van in March 2019 and suspended from her position four months later. She had previously been an MP and gave up her parliamentary seat to become mayor. She has charges against her both from her time as an MP and as a mayor, and when she left Turkey she faced the possibility of 120 years in prison. (In Turkey, MPs immunity disappears once they stop being MPs.) She escaped from Turkey to Greece, and German politicians helped her to come to Germany, where she is now applying for refugee status.

Fırat Anlı was Co-Mayor of the Metropolitan Municipality of Diyarbakir alongside Gültan Kışanak from 2014 until his arrest and imprisonment in 2016. In 2017 he was released and escaped to Switzerland before he could be rearrested.

The two exiled mayors, accompanied by Fayik Yagizay, the HDP’s representative to the European Institutions, were able to have meetings with Sergey Lagodinsky, Chair of the EU Turkey Delegation; Nacho Sánchez Amor, European Parliament Rapporteur for Turkey; Martin Schirdewan, Co-president of the Left Group; François Alfonsi, Andreas Schieder and Nikolaj Villumsen from the Kurdish Friendship Group; and an advisor to the President of the Parliament.

Both mayors are lawyers by profession and they were able to explain clearly the legal absurdity of the charges against them and other mayors, as well as to explain the political implications of what is happening. I have summarised some of the main points below. 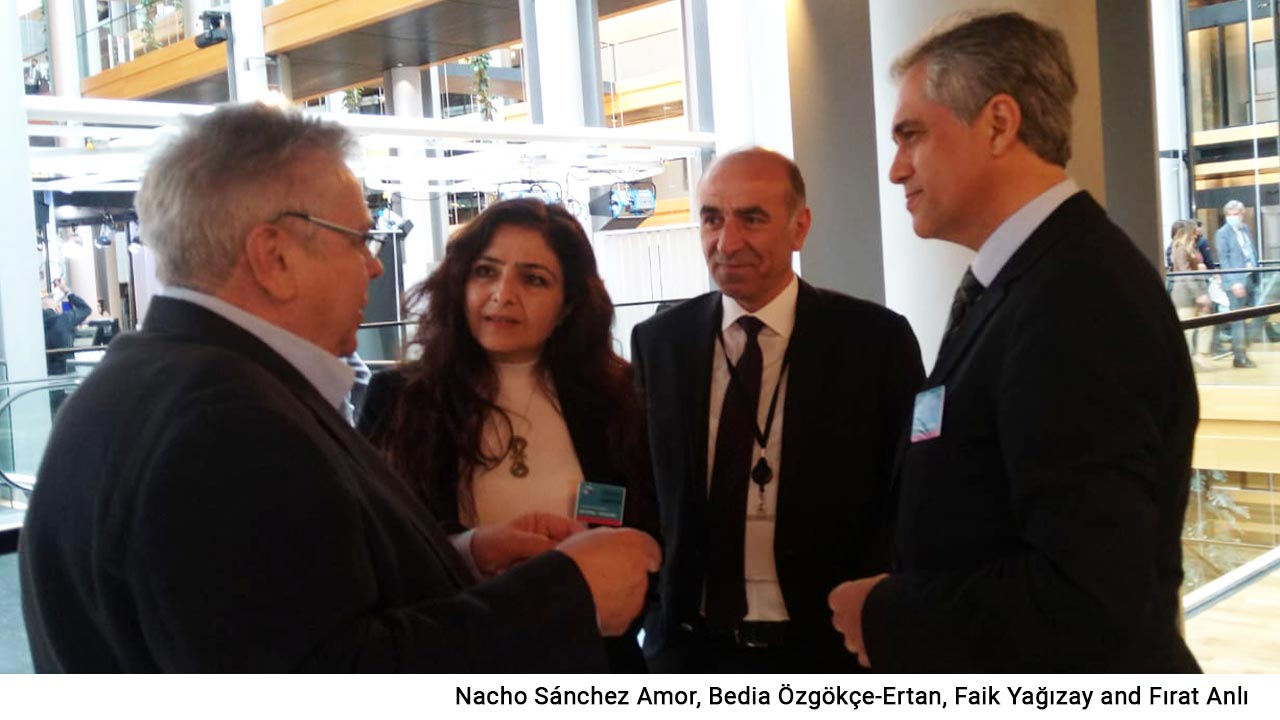 HDP mayors are removed and replaced by a state-appointed governor using a presidential decree brought in during the Emergency declared following the 2016 attempted coup. This decree is against the constitution but has not been repealed. According to the Turkish constitution, a mayor can only be removed if found guilty of an offence related to their position as mayor. The decree allows the Interior Minister to remove or suspend a mayor on the basis of an accusation of illegal behaviour alone. This could be a single complaint. The constitution also requires a replacement mayor to be elected by and from the council. Under the decree, they are replaced by the regional governor who is an appointee of the Interior Minister, and the elected council also stops functioning, so that the governor has complete control with no checks and balances. Governors have been using the municipal budget to support the AKP, as well as closing down the institutions built up under the HDP. Municipal buildings are blockaded by the military. This is effectively a colonial regime, and it has only been implemented in HDP-led municipalities.

In 2014, the HDP won 102 municipalities, but after the decree of 2016, 97 of these saw their elected mayors replaced by government trustees. Before the local elections of March 2019, President Erdoğan announced that elected HDP mayors would be removed again. This time, the HDP won 65 municipalities including 3 metropolitan municipalities (Diyarbakir, Van, and Mardin) and five cities. (The HDP didn’t stand in the West of Turkey in 2019, instead calling on voters to give support to the opposition CHP to defeat the candidates of the ruling AKP.) Six of the elected HDP mayors were prevented from taking up their posts on the grounds that they had previously been dismissed – even though their candidacies had been officially approved. They were replaced by the defeated runner-up, which in each case was a member of the AKP. The three metropolitan mayors were then removed within a few months, and others followed. Now only five elected mayors remain in post, all in smaller municipalities. Many of the deposed mayors are in prison or in exile. 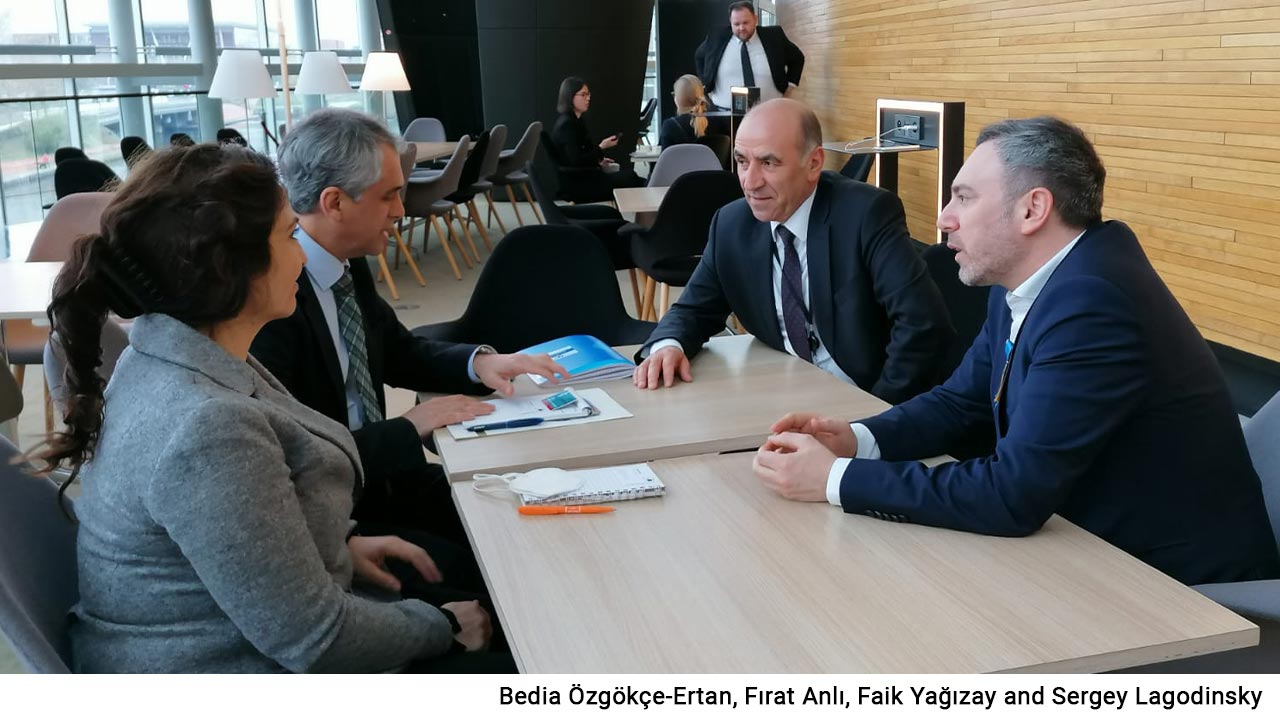 A key point of discussion was the co-mayor system, whereby the HDP elects from the councillors a co-mayor of the opposite gender to work alongside and equally with the mayor whose name is on the ballot paper. The mayors explained how this was able to bring a revolutionary change in the political representation of women, and that although it was not government policy, it had been accepted de facto. The co-mayors had working relationships with government departments until the government decided to use the co-mayorships as another excuse with which to attack the HDP. Then they not only condemned the system as unconstitutional but claimed it as evidence of terrorism.

The mayors were also able to describe the elimination of judicial independence, noting that a crucial ten of the fifteen judges that will deciding the case for the closure of the HDP were appointed by Erdoğan, and that, while the authorities can make quick decisions when it suits them, when the mayors have tried to bring cases against their mistreatment these are allowed to drag on without end.

The charges against Bedia Özgökçe-Ertan that were used to suspend her from her elected position as mayor of Van include: That under her mayoralty, Van helped a smaller municipality with the supply of oil – a municipality that was also HDP-run, and so, by equating the HDP with the PKK, they were ‘helping a terrorist municipality’. That she listened to a speech given by the HDP co-chair without protesting – which could be punished with 4 years imprisonment. And that, when she gave a press conference, someone behind her was wearing a scarf in Kurdish colours.

The mayor of Diyarbakir who was elected in 2019 (after Gültan Kışanak and Firat Anli) is a medical doctor who has been imprisoned with a 9-year sentence for treating a wounded guerrilla. Not only is a doctor obliged to provide treatment to all who need it, but the allegation is unproven. It is based on the evidence of a secret witness, who said he had heard this from someone else, but who subsequently withdrew his statement. The Supreme Court did not accept this withdrawal.

Before they were deposed, the HDP mayors were able to do a lot to support all cultural minorities in their regions. The prominence given to women and minorities was revolutionary. Thirty years ago, a Sunni wouldn’t drink water in the house of an Alevi, but in Kurdish cities millions have drunk water controlled by an Alevi woman. The government is ideologically opposed to this progressive politics, and not just to Kurds as Kurds. Rather, Erdoğan is a supporter of radical Islamic groups.

Although the people who met with the mayors showed genuine interest and often significant knowledge of the political situation, the mayors raised their concerns that actual relations between Turkey and the EU have not been helpful, and that Europe has just got used to the situation in Turkey. (Even the Heseke prison uprising wasn’t discussed in Europe despite its huge potential implications.) They pointed out that although there is huge resistance to Erdoğan within Turkey, as demonstrated by the millions who came out for Newroz, there is also repression and no freedom of the press, and the Ukraine war is not only dominating international attention but also allowing Erdoğan to pose as an international statesman. Thus, if Turkey is not to follow Hungary in re-electing their authoritarian leader, outside support is needed. They called for voices to be raised against Turkish oppression, and they suggested that if a fraction of the sanctions being imposed against Russia could be applied to Turkey, we could be looking at a very different scenario.