The European Left Congress hosted the speeches of various delegations and representatives on Saturday. Kurdish activists from different countries took the stage to tell of their struggle against the oppressive regimes in Turkey, Syria, Iraq and Iran, and were saluted by their European peers.

The Congress of the Party of the European Left, which gathered between December 9-11 under the slogan “Peace, Bread and Roses”, also saluted the Kurdish struggle against oppressive regimes in different countries.

The party, which operates as an association of democratic socialist and communist political parties in the European Union and other European countries, brought together politicians, international guests, trade unionists, social movements and other representatives in Vienna.

The Congress elects a new leadership and adopts a new programme and a three-year guideline.

“It sums up our main objective for the next few years: the creation of a social, ecological, democratic and peaceful world,” said the President of the European Left Heinz Bierbaum, on the 2022 slogan.

“We are facing profound economic, social and political upheavals caused in particular by the ecological challenges like climate change. The Russian invasion of Ukraine, which caused the war, has had an enormous additional impact. First the pandemic, now the war: both exacerbate the already existing multiple crises. To combat the challenges, and build a better future for all, the Left in all of its diversity must rediscover internationalism. We need future-oriented projects and crisis-proof policy in the fight against global phenomena like inequality and climate change,” Bierbaum said.

The Congress also hosted the speeches of various delegations and representatives on Saturday. Kurdish activists from different countries took the stage to explain their struggle against oppressive regimes in Turkey, Syria, Iraq, and Iran and were saluted by their European peers.

Turkey’s pro-Kurdish Peoples’ Democratic Party (HDP) Deputy Feleknaz Uca stated that the HDP is the leading party of the anti-war struggle in Turkey and called for solidarity for the party in the coming hearings in the HDP Closure Case. 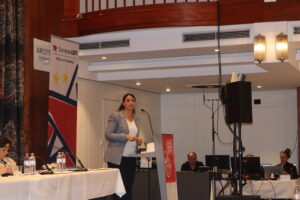 Many speakers also referred to the “jin, jîyan, azadî,” women’s revolution in Iran.

Maurizio Acerbo, Secretary of the Communist Refoundation Party, raised the PKK flag at the end of his speech and said:

“As European Left Parties, we must work for the PKK’s removal from the list of terrorist organisations and for the leader Öcalan to be freed immediately.” 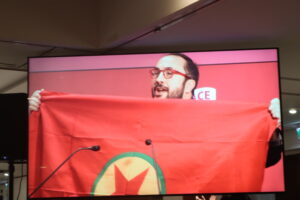 Sinan Önal, a political scientist and currently an envoy of the Kurdistan National Congress, who has formerly acted as an adviser in policy-building and international affairs to the left-wing alternative and pro-Kurdish parties, was one of the speakers calling for solidarity with the Kurdish people.

“Many regards and greetings to you all from Kurdistan National Congress,” Önal said at the beginning of his speech on behalf of the umbrella organisation, which represents Kurdish institutions from all parts of Kurdistan and Europe.

“Dear friends, in the middle of a global crisis, climate change, and the war in Ukraine, this Congress bravely sounded out to a hopeful world. All parties and guests here not only call for peace and bread, but the creation of a feministic, ecological and democratic world,” Önal said.

Önal recalled that the Kurdish political movement is also working for the same utopia and explained how European nations could support the Kurdish struggle, particularly against escalating Turkish aggression.

“The European states can make this happen not only by exerting diplomatic pressure on Turkey but by following the lead of the Belgium supreme court and lately the European Justice Court in Luxembourg in removing Kurdistan Workers’ Party (PKK) from terror list,” Önal said.

The classification of the PKK is one of the main instruments the Turkish state utilises to legitimise both its crackdown against Kurdish politicians in Turkey, and its cross-border operations into northern Iraq and North and East Syria.

The PKK was included in an EU list of terrorist organisations by the European Council in 2012. In 2014 the Court of First Instance, part of the European Court of Justice, ruled that the decison to include the PKK in the list had been taken on insufficient grounds. However, the Council appealed that decision and continues to include the PKK in the list. The Belgian Court of Cassation the same year also decided that the PKK should not be classified as a terrorist organisation. Kurdish organisations in Europe have for years been organising campaigns calling European countries to remove the PKK from terror organisation lists.

Including the PKK in terrorism lists only helps add to victimisation of the Kurds, Önal said, adding that the PKK is a legitimate party in an armed conflict for self-determination which is a legitimate right recognised by international conventions.

The European left should also pressure Turkey not to ban the pro-Kurdish People’s Democratic Party (HDP), Önal added, referring to the ongoing case in Turkey’s Constitutional Court that seeks the closure of the third-largest party in the country’s parliament. Since the start of a massive crackdown against Kurdish politicians after the collapse of peace negotiations between the Turkish state and the PKK, some 4,000 HDP members including MPs have been imprisoned, and elected HDP mayors have been deposed and replaced by government-appointed officials as a part of Turkey’s anti-Kurdish purge.

There were also delegations from Palestine, Western Sahara, Senegal, Chile and Cuba among the guests.